BREA, Calif., June 6, 2022 — After a stellar start to the weekend, Suzuki Motor USA and Team Hammer experienced mixed conditions and mixed results as the Road America round of the 2022 MotoAmerica AMA/FIM North American Road Racing season concluded on Sunday in Elkhart Lake, Wisconsin.

One day after securing a maiden MotoAmerica Supersport victory in remarkable fashion, Vision Wheel M4 ECSTAR Suzuki’s Tyler Scott was once again a force at the front of the class despite dealing with inclement weather. 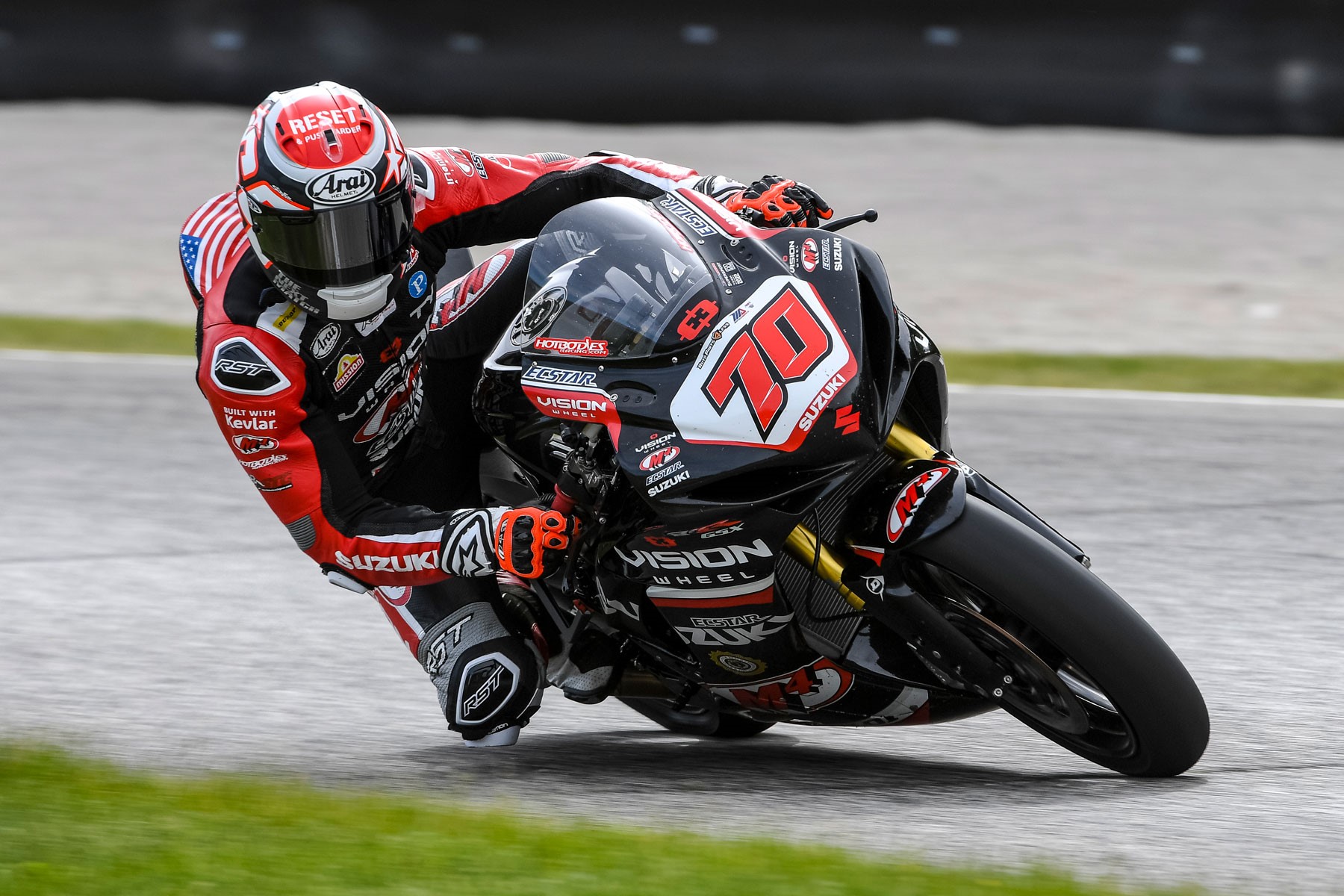 After some trouble in Race 2, Tyler Scott (70) is looking forward to building off the win in Race 1 and take it to the next round at Ridge Motorsports Park.

The 16-year-old earned the holeshot from pole and then settled into a battle for the podium in the treacherous wet conditions aboard his GSX-R750. That fight went deep into the contest with Scott mounting a charge with three laps remaining, diving up into third position in Turn 5 with less than three laps remaining.

However, he was nearly pushed off track by another rider in an errant encounter a few corners later. Off line in the slick conditions, the youngster suffered a fall in the very next corner.

“The race started pretty well,” Scott said. “Then I got shuffled back a few spots and I was trying to concentrate on the riders I am battling with in the championship. The guys at the front had an outstanding pace going for the conditions and the race was going very well for me as I was trying to keep up with the group.”

“Another rider put an aggressive move on me, and I got off my line. The rear came around on me in the next corner and that was it. I had a great weekend, got a win, and once again I learned a lot.” 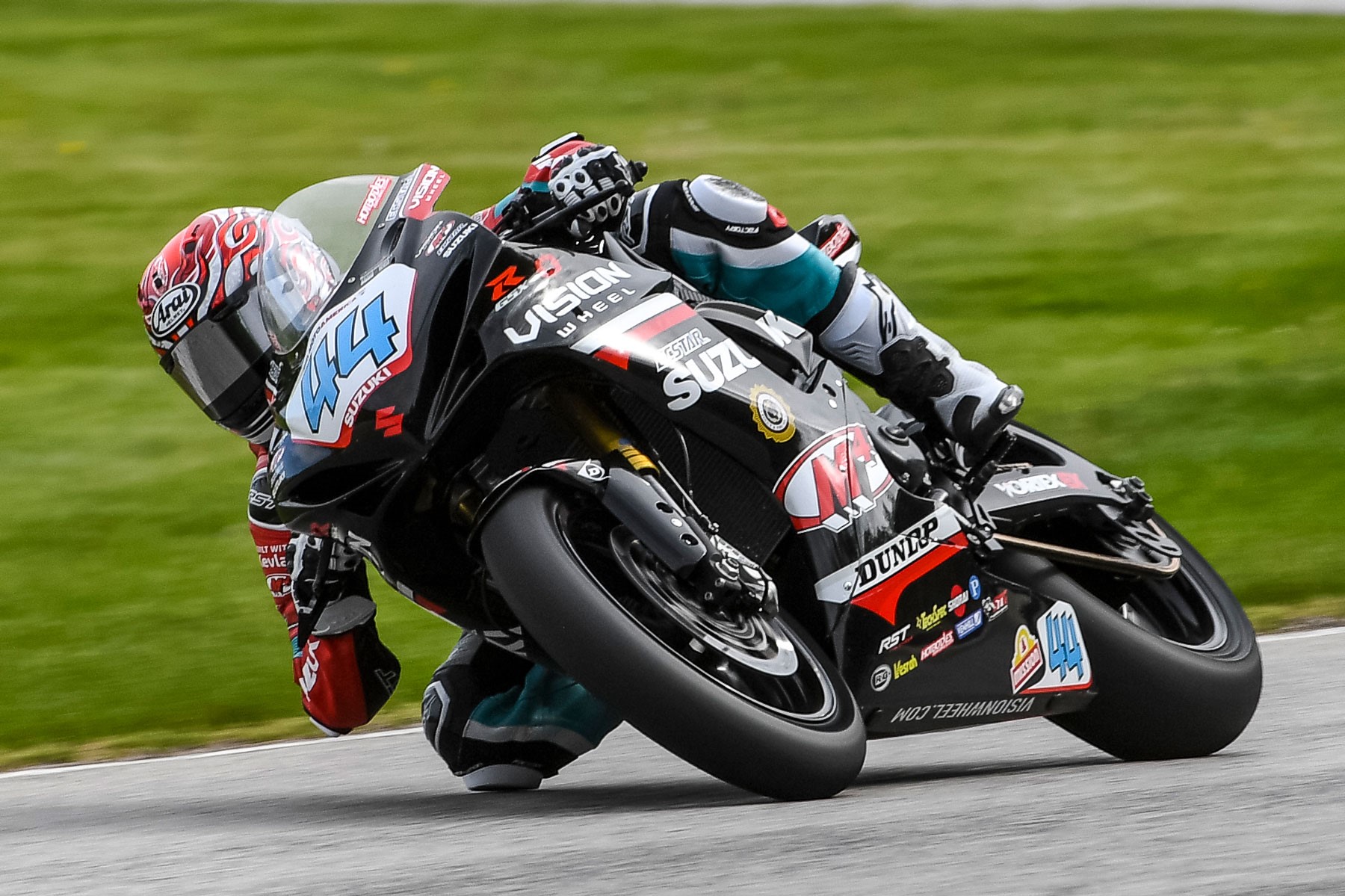 Sam Lochoff (44) had some misfortune in his warm-up lap in Race 2 but is building off the experience from Road America.

Scott’s Vision Wheel M4 ECSTAR Suzuki teammate, Sam Lochoff, had a difficult day as well; his race ended before it ever started due to an ECU problem that appeared on the warm-up lap.

However, Suzuki still made its presence felt on the Supersport podium as 3D Motorsports LLC Suzuki’s Luke Power expertly guided his all-new next-generation GSX-R750 to second position. The young Australian’s Suzuki benefiting from an electronic throttle assembly and other components developed by Team Hammer and Suzuki for the new class structure.

Coming off his second MotoAmerica Supersport top ten finish of the year on Saturday, young racer Liam Grant managed to battle at tricky and wet Road America on Sunday, earning the checkered flag and 16th place for his efforts. Grant has already shown steady progress in his first season with Team Hammer as he continues to advance his skills.

The MotoAmerica Superbike race was then contested in arguably even more tricky conditions as the track proved too wet for slicks initially but steadily dried throughout the contest. 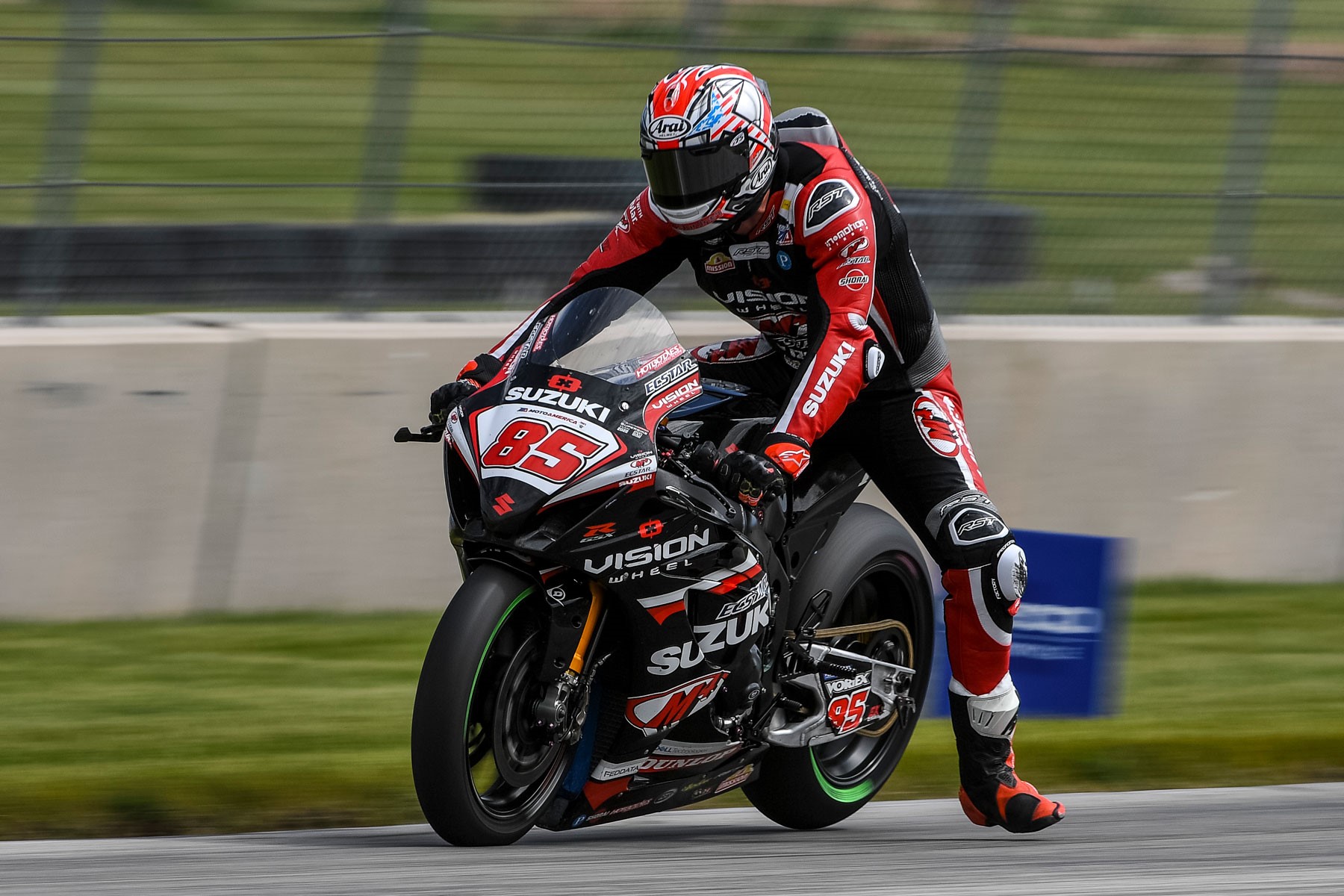 After a seventh-place finish in Race 2 for Jake Lewis (85), he is looking forward to improving the bike settings in the coming weeks.

Vision Wheel M4 ECSTAR Suzuki’s Jake Lewis positioned himself as high as fourth early before ultimately keeping his GSX-R1000R upright and bringing it home in seventh position. “It was a tough race because the conditions were mixed,” said Lewis. “I usually like that but the track dried so fast, three laps in I thought my tire was gone. The result isn’t what I or the team wanted but we played it safe and got some points. I’m looking forward to us working hard these next few weeks, so we improve going into the Ridge.”

Superbike class rookie teammate Richie Escalante, meanwhile, was sixth in the first corner before claiming 15th at the checkered flag. 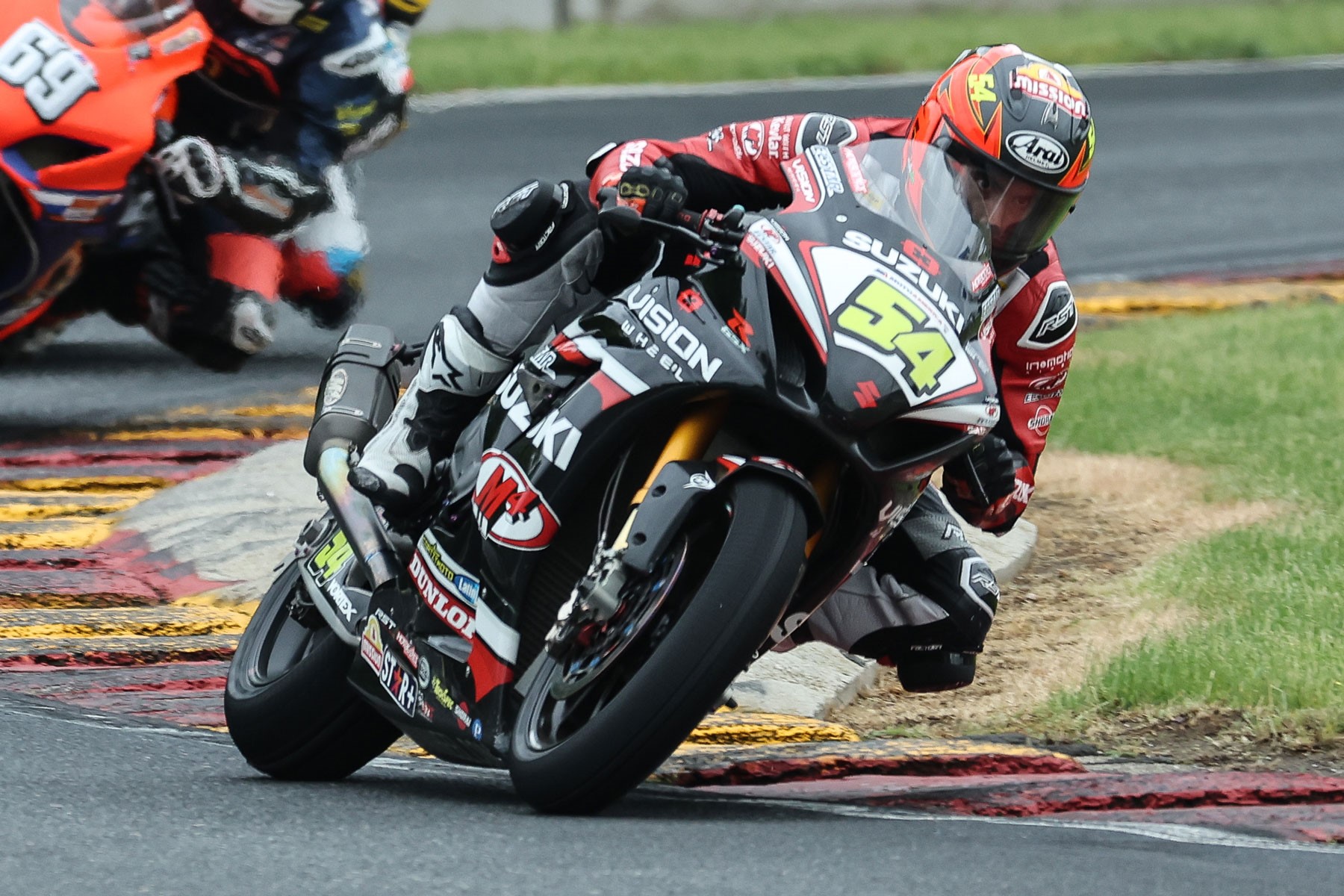 Richie Escalante (54) rode his GSX-R1000R Superbike in adverse weather for the first time at Road America.

Escalante said, “Overall the weekend was difficult for me. After our test in Pittsburgh, I came into the weekend looking to take the next step. I was happy to finish these races, but I had never ridden a Superbike in wet conditions before and that was difficult today.”

“The team is working very hard to help me, especially with the changes to the bike,” the Superbike rookie continued. “Even a small change makes a big difference. I am very happy with the team and the bike but feel I need more experience to keep improving. I will keep training and pushing to go faster. I am really looking forward to the next race.”

Team Hammer will be back in action later this month as the MotoAmerica season resumes at Ridge Motorsports Park in Shelton, Washington, on June 24-26.