BREA, CA – April 25, 2022 — The Vance & Hines/Mission Suzuki Pro Stock Motorcycle Team returned to action this weekend at the NHRA Spring Nationals at Houston Raceway Park for the second round of the 2022 Pro Stock Motorcycle championship, posting a semi-final round appearance by rider Eddie Krawiec and fast top speeds by Angelle Sampey showing steady improvement for both riders. 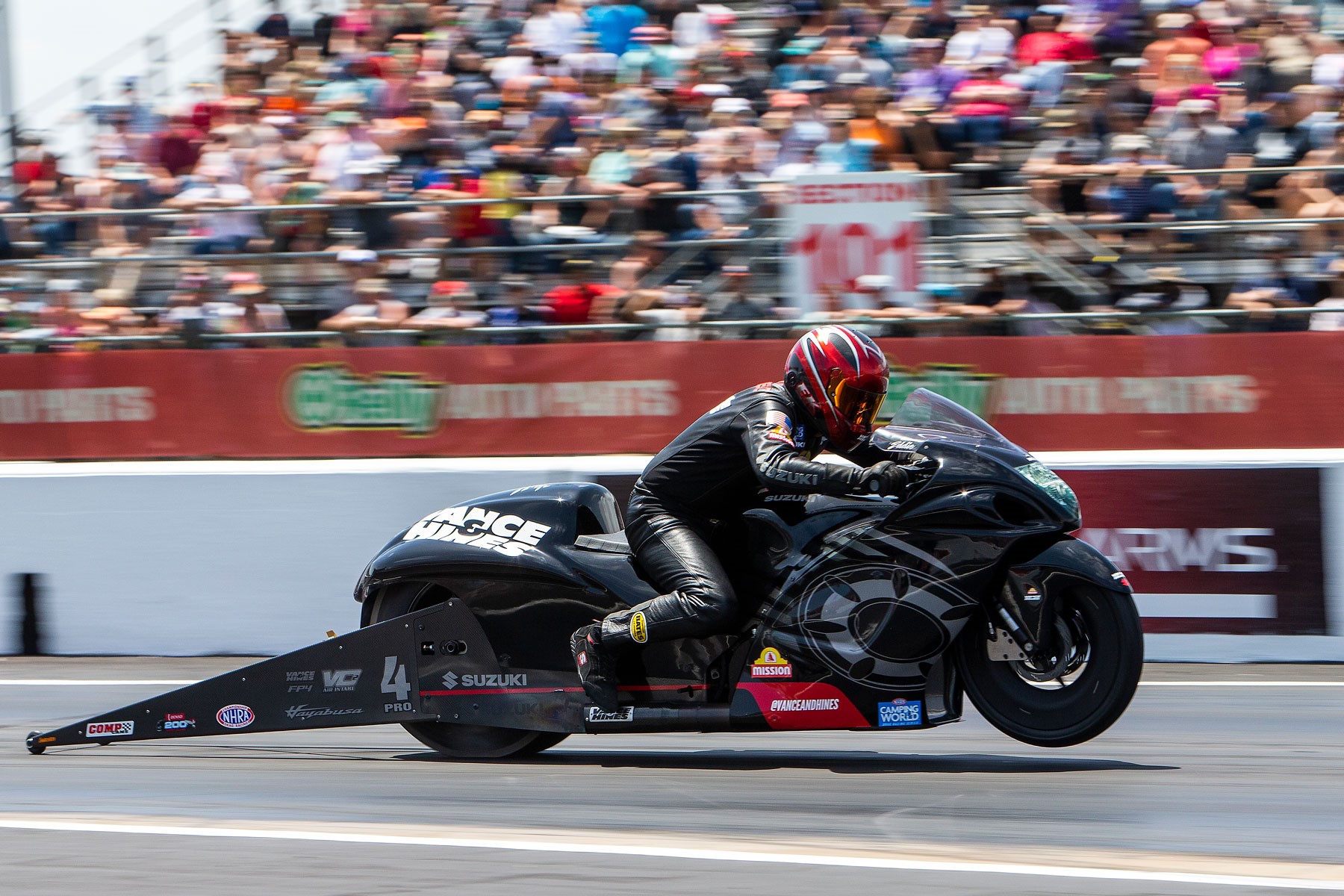 Krawiec’s weekend started off with a strong qualifying performance that put his Suzuki Hayabusa in the third-place position with a 6.789-second/200.08 mph run. Sampey qualified eighth with a 6.858/198.03 mph run.

In the first round of Sunday eliminations, Krawiec beat Ryan Oehler with a 6.786/198.96 mph and then knocked off Joey Gladstone in the second round with a 6.772/199.17 mph to make the semi-final round. But his 6.802/197.10 mph in the semi-finals was not enough to overcome Johnson’s 6.711/201.55 mph run. Johnson won the final over Matt Smith. Suzuki congratulates Steve Johnson on his first victory this season. 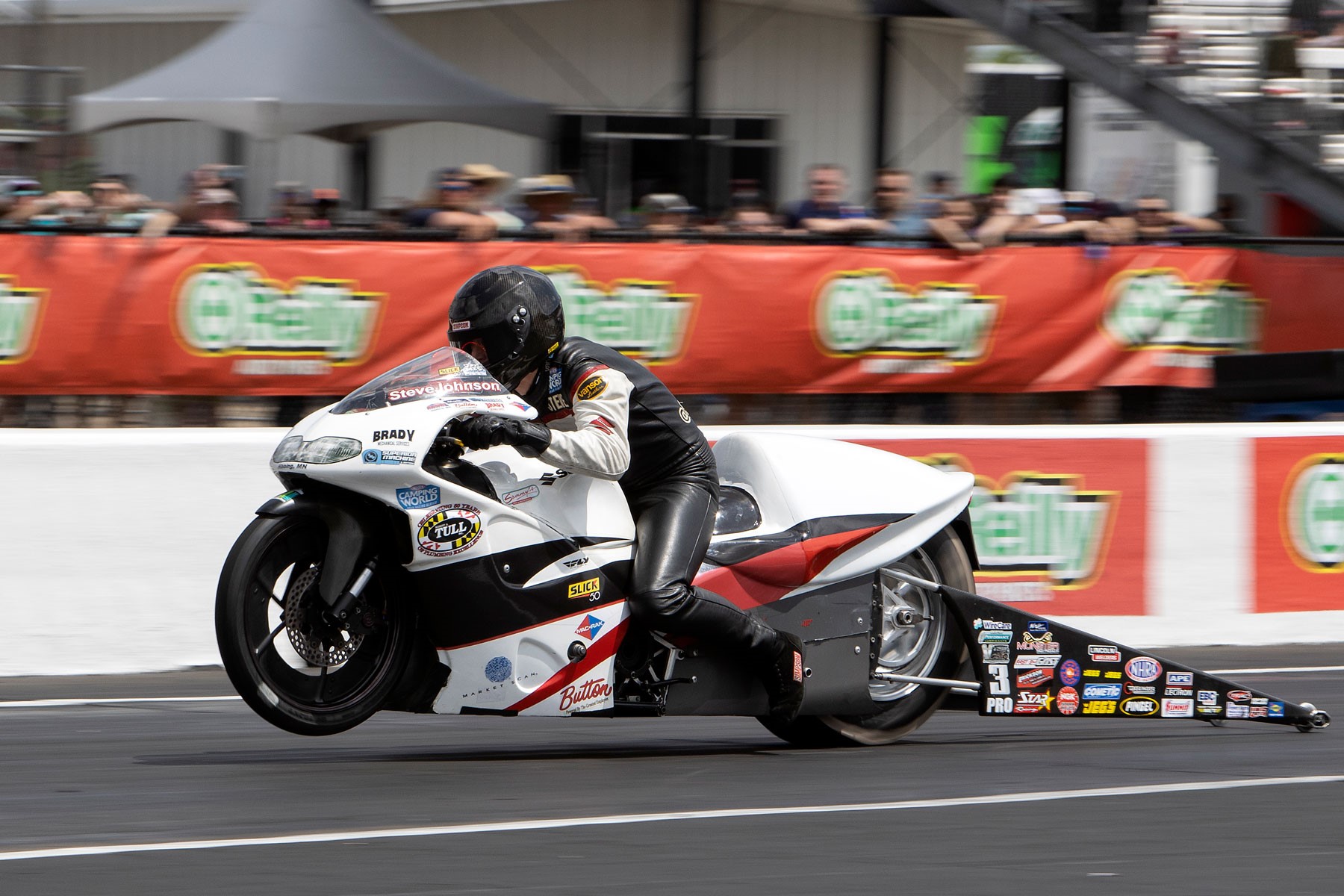 During the extended break after the season-opener at Gainesville, Florida, the Vance & Hines team spent some time testing that paid benefits for both Krawiec and Sampey in the form of more predictable engine tune-ups and aerodynamic enhancements that improved rideability and top-end speed performance.

“We tested a couple of weeks ago in Indy and ran well but needed to start turning it into time slips at a race,” said Krawiec. “Every round it was getting better, all the way until the semi-final round. I got caught up in the cross wind a little bit and lost a little time. But all in all, the bike ran really well. It’s something to tune on and continue to progress forward with. I've got a very good bike going to Charlotte. I'm excited.” 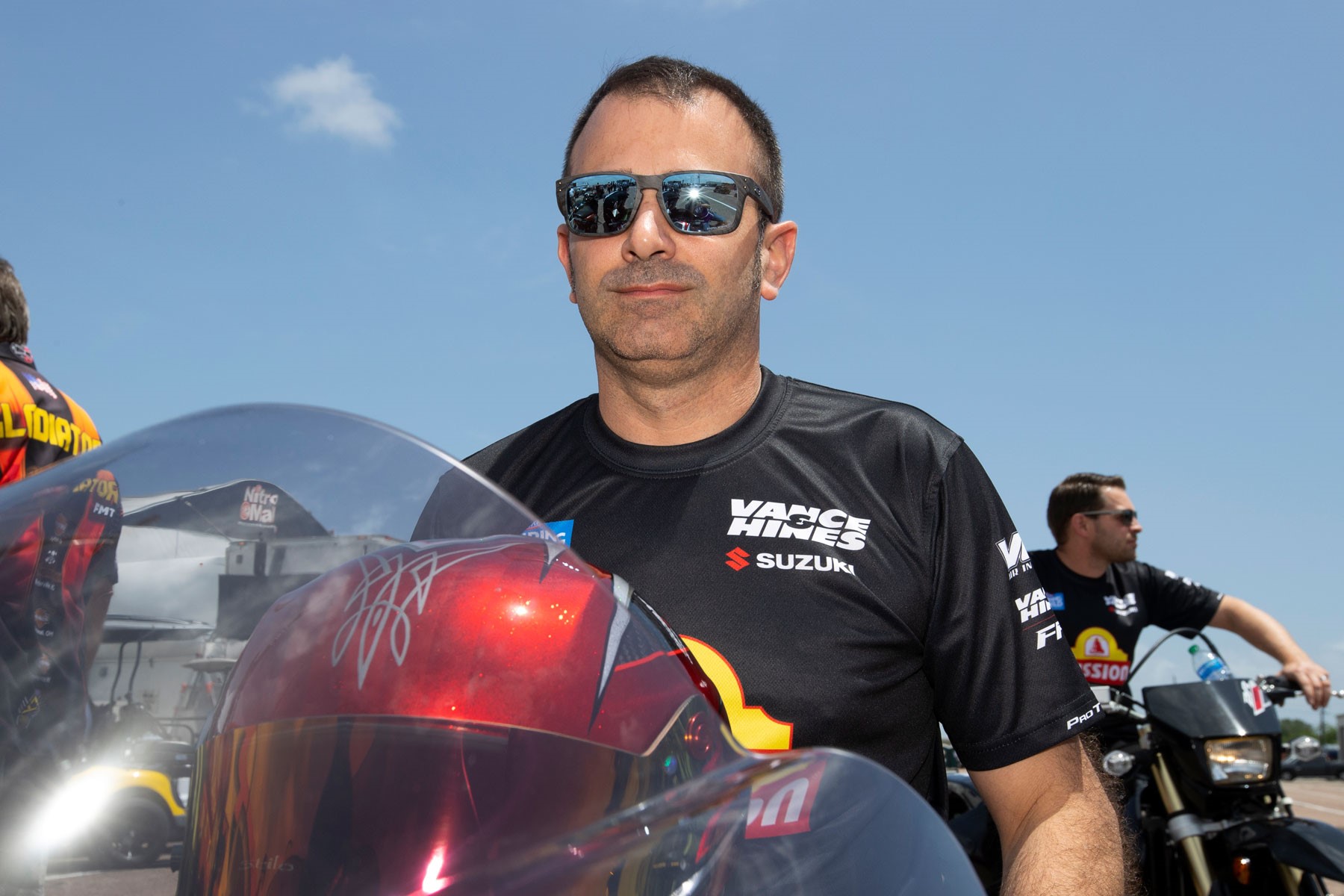 Krawiec was also optimistic the hot, humid conditions in Houston provided useful tuning information that sets the team up well for races to come throughout the rest of the summer months.

“The weather that we're running in right now is very hot and humid, with a lot of water in the air. Usually, it's hard to get a good tune up in that stuff. I feel like we've got enough information to understand what we need to do. The hot weather tune-up for our Hayabusas is going to be really strong.” 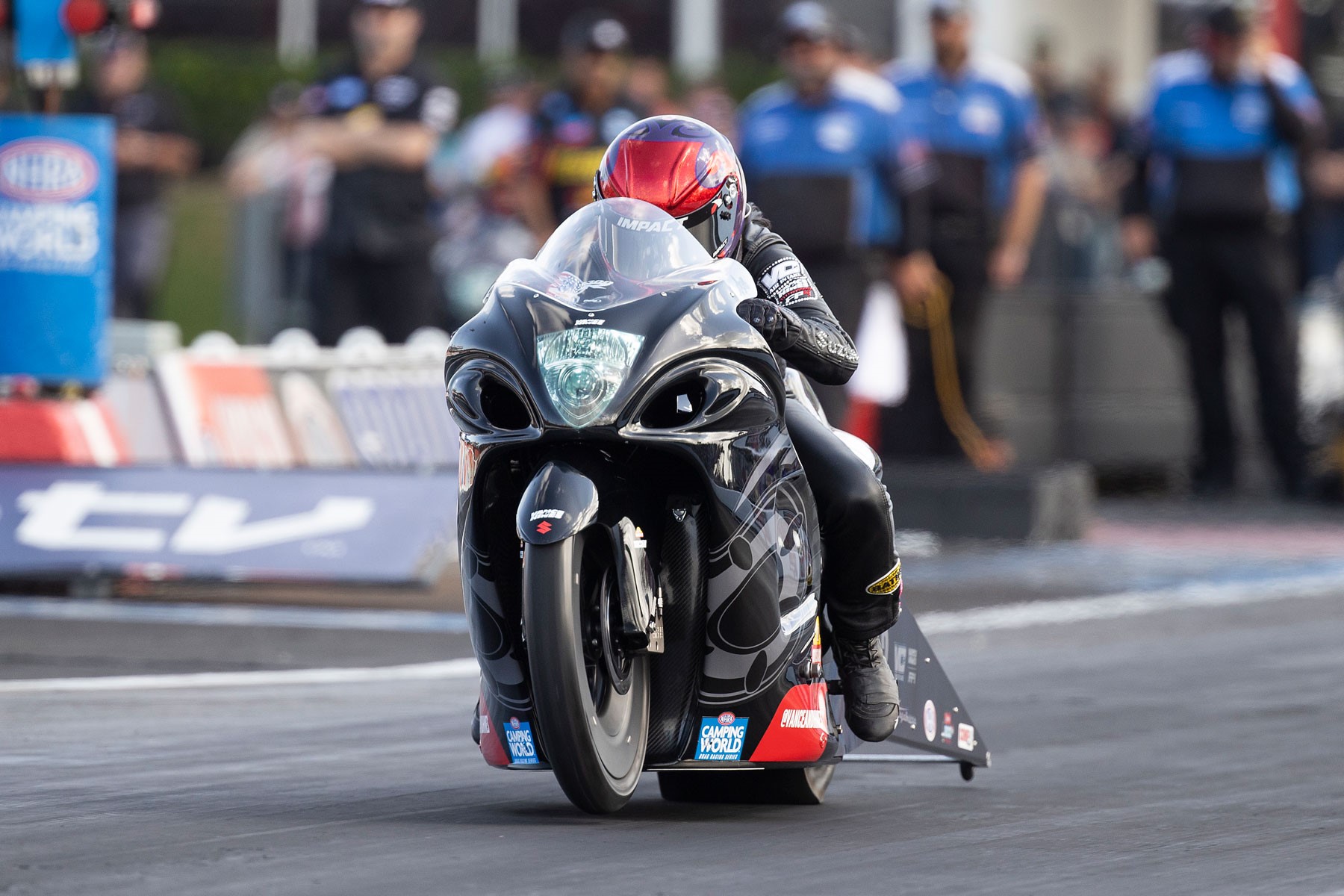 For Sampey, racing at the closest track to her home in Louisiana, where she has won four times previously in her career, was something of a bittersweet homecoming with the news that Houston Raceway Park is closing after this event, ending its 35-year run as host of the NHRA Spring Nationals.

“I think half of Louisiana was at the race this weekend. It's always a race I want to win because there's so many people that I know here,” Sampey said. “From the second I got here until I left, I spoke with people that were supporting me and wanted to see me win. It is very bittersweet that I couldn't do it for them as well as my team. But I feel like there were 10,000 family members there that wanted me to win.” 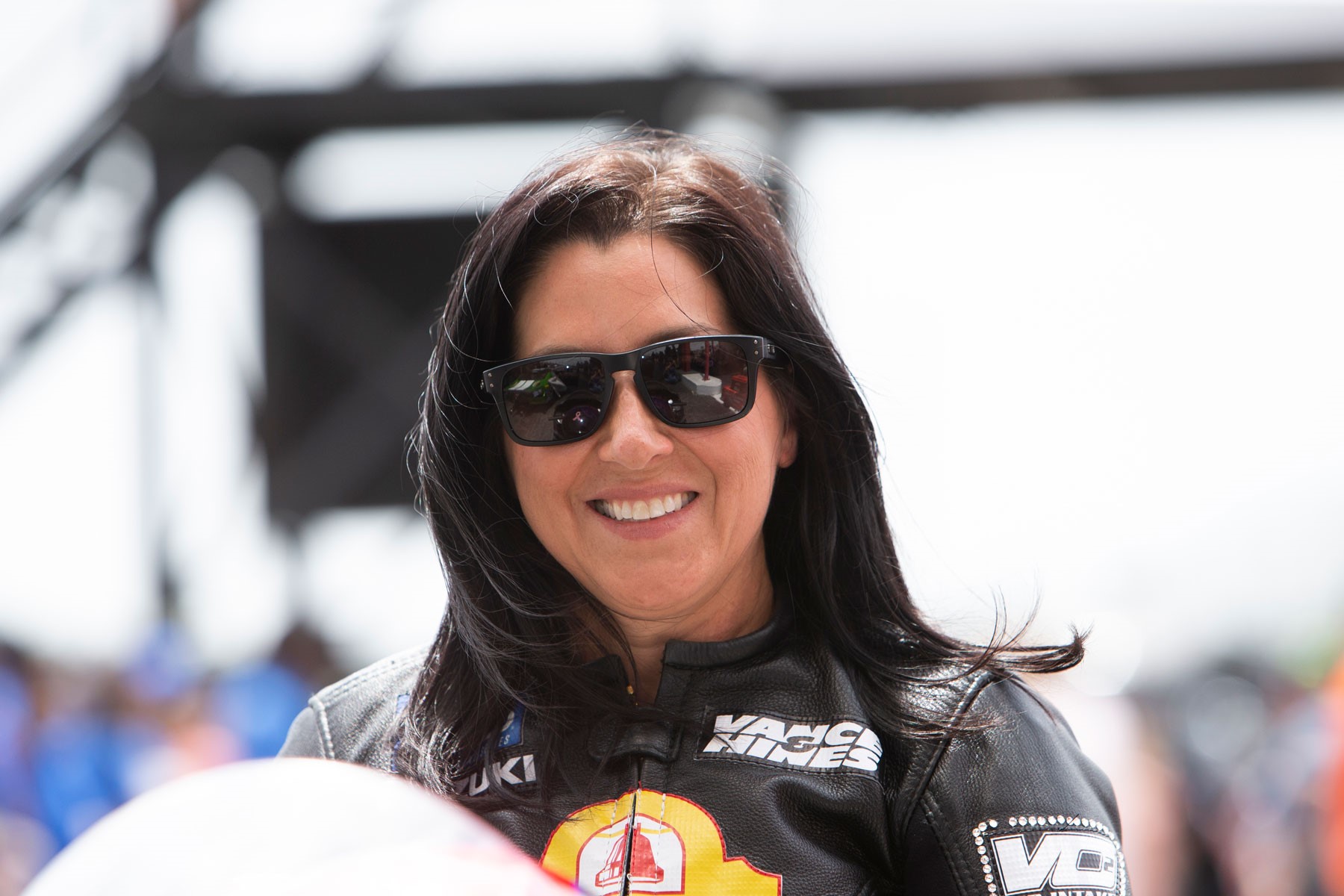 All smiles for Angelle Sampey (2) at Houston Raceway Park.

“The bike was amazing at the top end of the track,” she said. “Drew told me we were going to go fast, so he told me to get ready for it. One of the things that excites me the most is the fact that it handles so well at the top end. I've made enough really straight and fast passes that I'm feeling much more comfortable on the bike. I wanted to win so badly for everybody, but I am happy that it is handling the way it is. It gives me the momentum and confidence I need to go to Charlotte next weekend and do it all over again.”

Crew Chief Andrew Hines summed up the weekend as one of major progress for both riders that sets the team up for the next race and the rest of the season.

“I don't think we saw the full potential (of Angelle’s bike), how fast it really could have been. I didn't have a good handle on her bike’s 60-foot time all weekend. We're trying to learn with it, but it shows it'll run really fast speeds,” he said. “Obviously, we're behind the ball a little bit with some of the numbers that other people were putting up. But major, major progress in Eddie's bike, which proves that his chassis is a good piece that we built at Vance & Hines and it can put the traction on the ground. We’ve got power we can find from her bike to his bike too. We'll work on that for Charlotte and come out strong.”