BREA, CA – May 16, 2022 — Vance & Hines/Mission Suzuki Pro Stock Motorcycle team rider Eddie Krawiec rode his Suzuki Hayabusa to the semi-final round of the NHRA Virginia Nationals in Richmond, marking his and the team’s second consecutive semi-final round appearance of the season. 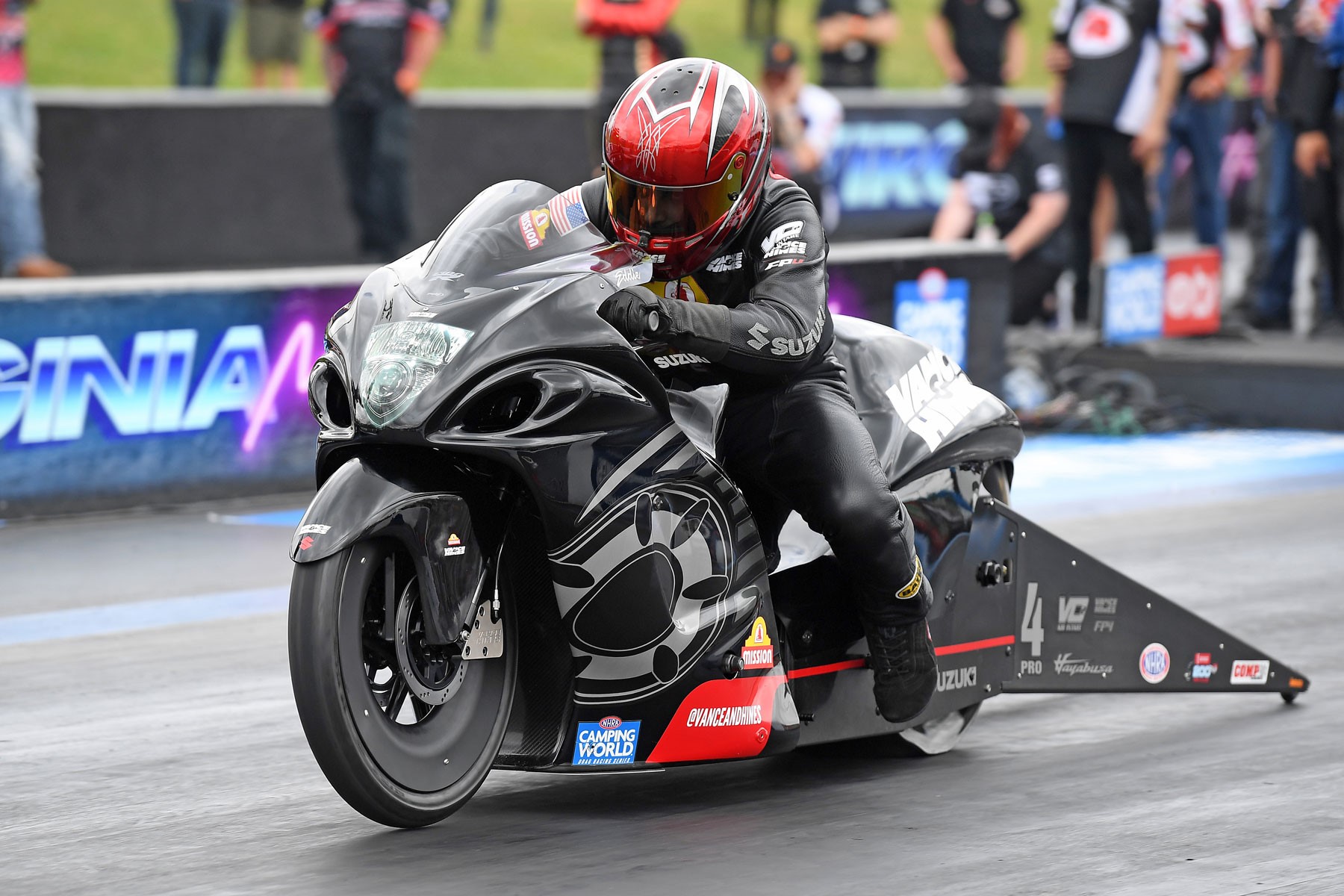 Eddie Krawiec (4) and his Suzuki Hayabusa getting quick and faster as the season goes on.

After placing eighth in the qualifying sessions, which were shortened due to weather and track conditions, Krawiec defeated Joey Gladstone in the first round of Sunday eliminations with a 6.823-second/196.30 mph pass that was his fastest of the weekend. He advanced to the semi-finals with a 6.869-second/196.99 mph win over Angie Smith, before falling to her husband, Matt Smith, in the third round. Smith, who ran a 6.868-second/197.86 mph to advance over Krawiec’s 6.898-second/196.52 mph run, would go on to defeat Steve Johnson in the final round to win the event on his Suzuki Pro Stock Motorcycle. It was the second consecutive weekend it was an all-Suzuki final in the young season. 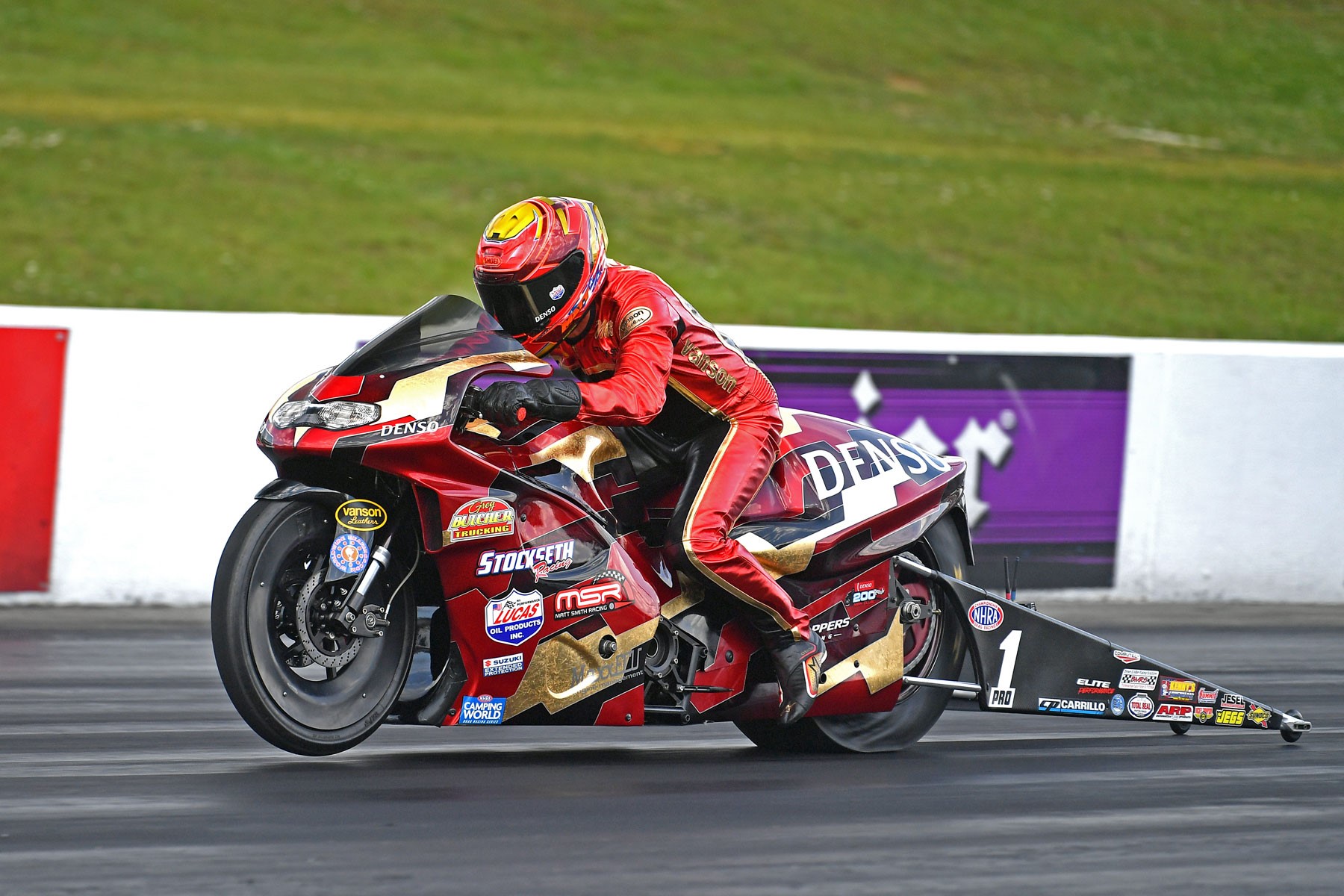 Congratulations to Matt Smith (1) aboard his Suzuki for the victory at Virginia Nationals.

“First round, my motorcycle showed me where it should be and then I started chasing a bogging issue off the line,” Krawiec said. “When it goes 6.82 (seconds) with a 1.04 (-second) 60-foot time, best of the round, you know it should do that every round. And then it developed a bog. I'm trying to get an understanding of why my bike is doing that, so I'm going to do some testing here (at Richmond) tomorrow. Going to the semis is a good thing. I’m gaining points and at least maintaining or moving forward in my points position. So, it’s positive in that aspect.”

Racing on one of the smoothest track surfaces on the NHRA circuit, Vance & Hines/Mission Suzuki rider Angelle Sampey qualified second and defeated Jianna Evaristo in the first elimination round with 6.784-second/199.26 mph run. However, her weekend came to a premature end with a red-light foul against Marc Ingwersen in the second round. 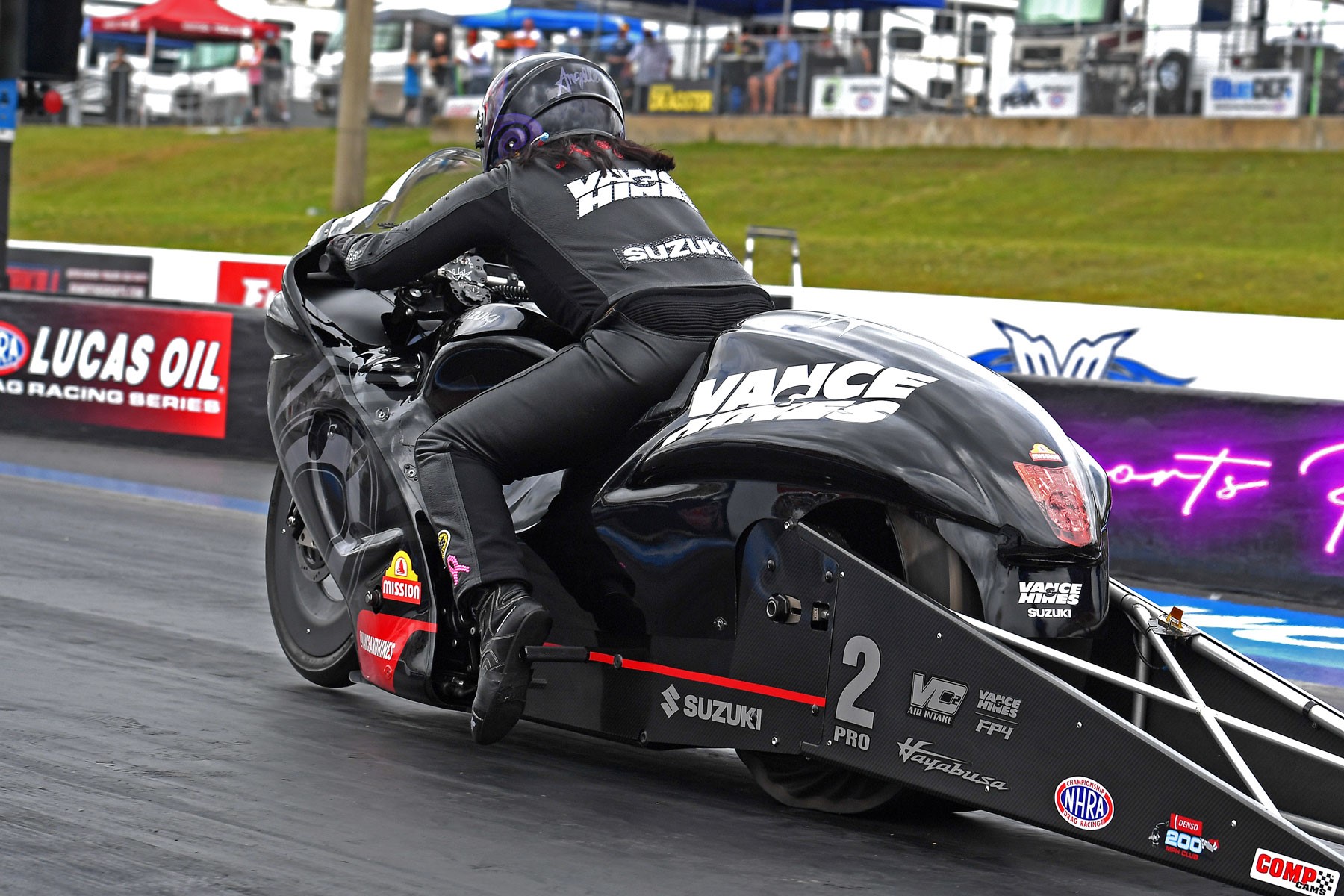 Angelle Sampey (2) qualifying in the number two spot was the highlight of her weekend.

“It was great to start in the number two spot. I had the lineup I wanted, and it just didn't work out,” said Sampey with disappointment. “I was calm and confident and ready to race, but I should have taken a breath and slowed myself down a little bit. I rushed in and I rushed to let go of the clutch, and I went red. Threw it away. I have an amazing motorcycle, an amazing team, an amazing crew chief, and amazing sponsors. I have the opportunity that everybody would love to have, and I need to get it together. I know I can get this done, but I need to slow things down a little bit mentally. I need to relax more. I might start doing yoga again.”

Crew Chief Andrew Hines was happy with the performance of Sampey’s bike, especially due to a 10-pound weight penalty assessed to all Suzuki-powered motorcycles in the class before the Virginia race as a competition adjustment.

“Angelle’s motorcycle is very fast and we're finally getting to the point where everything we’ve been experimenting with is showing we're going in the right direction. It ran well considering the 10-pound weight increase this week,” said Hines. “Eddie's bike is still missing that little bit. It's off just enough to be vulnerable. We’ve been working on his clutch setup, but it’s evolving into something else as we keep making more and more runs on it. They each have a mind of their own sometimes. Right now we've got to evolve with it faster. We had a motorcycle that was completely capable of going all four rounds today and bringing home the Wally. There's inconsistency with rule changes here lately, but as a team, we're going to push to overcome those and move on to the next one.”

After four of 15 rounds, Krawiec and Sampey currently sit third and seventh in the Pro Stock Motorcycle Championship standings with 279 and 209 points, respectively. The Vance & Hines/Mission Suzuki Pro Stock Motorcycle team will be back in action June 17-19 at the NHRA Thunder Valley Nationals in Bristol, TN. For more information, visit www.NHRA.com.