Brea, CA (July 6, 2021) – The legendary July Fourth weekend AMA Pro Motocross Series race at RedBud MX was one to celebrate for the Suzuki racers. 450-class rookie Brandon Hartranft turned a blistering pace on his Twisted Tea/H.E.P. Motorsports/Suzuki RM-Z450 into his best finish in the premier class in just his fourth race. His Twisted Tea/H.E.P. Motorsports/Suzuki teammate Max Anstie battled inside the top ten during the race day on the rutted, hillside track aboard his Suzuki RM-Z450. BarX/Chaparral/ECSTAR Suzuki 250-class rookie Dilan Schwartz again had the pace in his class, running inside the top ten for another strong performance aboard his Suzuki RM-Z250. 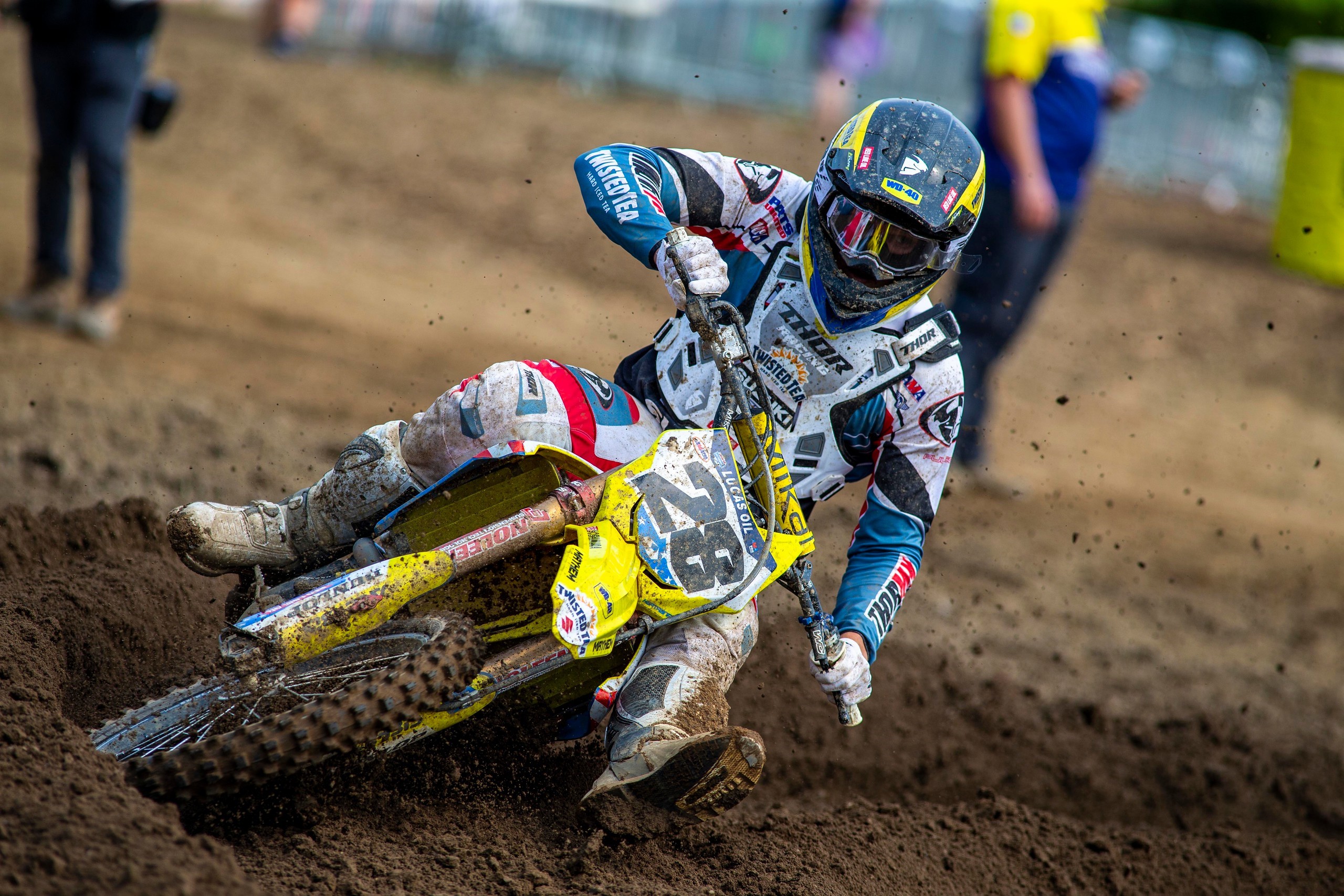 The day belonged to Hartranft from the start. Running inside the top ten during qualifying amid the packed class of experienced riders, Hartranft ran with the frontrunners from the drop of the gate in Moto 1, netting his career-best 450-class moto finish. He followed with a strong Moto 2 ride at the event presented by, his team's title sponsor Twisted Tea. He went home with his first top ten overall finish in the class. The points on the day advanced him two positions in the series championship standings.

"It was a great day from the time I put my wheels on the track to the last lap of the second moto," said Hartranft. "I hit LaRocco's Leap for the first time. This year it was actually massive; there were a bunch of people not making it, so it was a good feeling that I was greasing it. In the second qualifying we figured the track would've been slower, but there were about three of us that wicked it up, and I was one of them. I dropped a second off my lap time, which put me ninth for that session. In the first moto I had a decent start, but then got arm pump early and people passed me. I finally broke the arm pump and made some passes back and ended up 11th, which felt awesome. In the second moto I had a pretty good start again and had a great battle. The track was absolutely gnarly, there wasn't one smooth spot, so RedBud was RedBud. I ended up 13th in the second moto for a tenth overall. We didn't expect a top ten yet. I knew I could, I've been building every race and every day I've been training. I'm really, really proud of myself." 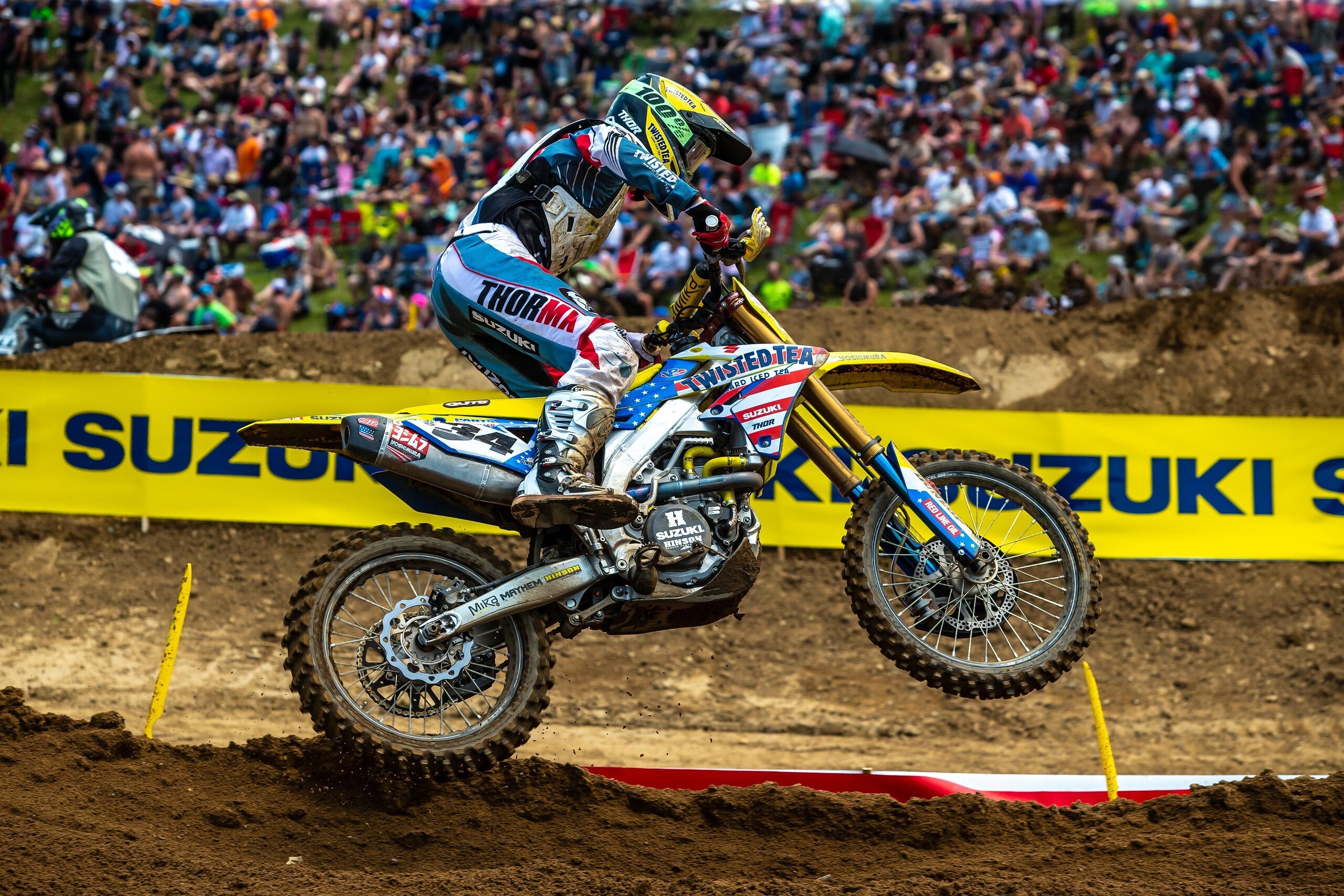 Anstie was brilliant on the Michigan track, taking a mid-pack starting position in Moto 1 into a top spot until shorting the track's challenging and monstrous triple jump. The brutal impact required a mid-race wheel change. Anstie ripped a great start in Moto 2 and held strong through the 30-minute plus two lap race to earn enough points and bump him up one spot in the championship title chase.

"I was inside the top ten for most of the second moto and ended up 11th, so that wasn't too bad," was Anstie's summation of his day. "Unfortunately, in the first moto I blew my wheels out so I had to come into the pits and then ended up about two laps down. You know, one of those weekends. We're refocusing and getting back on it for next weekend in Southwick."

"RedBud was a good step in the right direction," reported Twisted Tea/H.E.P. Motorsports/Suzuki Team Manager Dustin Pipes. "Brandon had a great day from the very start of practice. He posted top ten qualifying times and finished his day tenth overall. He is really starting to gel with his bike and the speed he has shown during the week is finally starting to break through on race day. Max had an up and down day, but it ended on a positive note. He came up short on LaRocco’s Leap and had to come in to change parts during the first moto and then went off the track while running in the top ten during the second moto. The good thing is his speed is definitely improving and the testing sessions during the week are translating into good settings for the race. I am looking forward to the chance to keep the momentum going at Southwick." 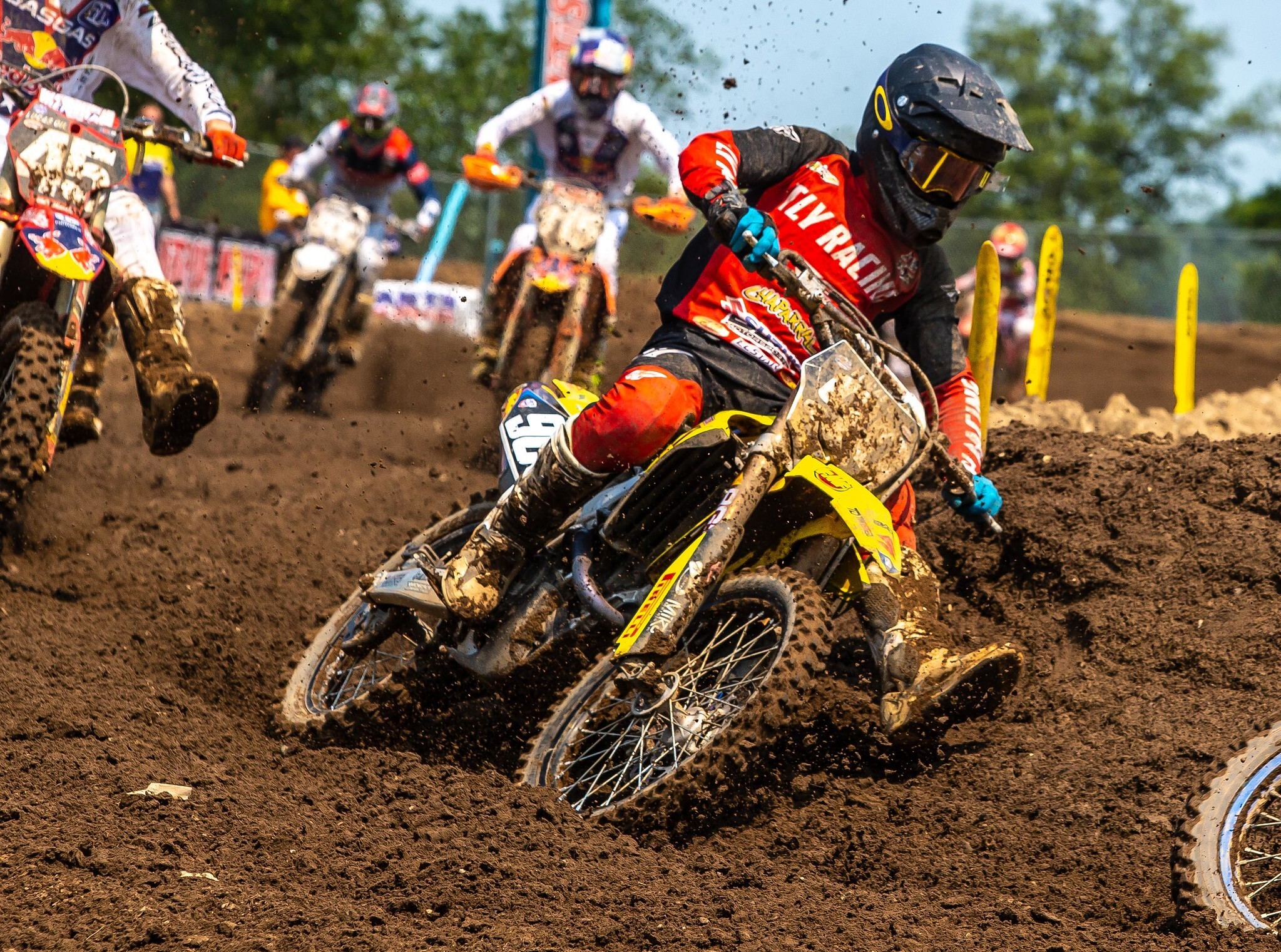 Dilan Schwartz (90) raced hard and continues to improve as the series heads to Southwick.

Although Dilan Schwartz was able to put his BarX/Chaparral/ECSTAR Suzuki inside the top ten at the previous two rounds, the rookie 250-class racer wasn't able to duplicate the finish at RedBud. Early in Moto 1 the rookie was moving forward but wasn't able to reach a career-best finish. In Moto 2 Schwartz grabbed a top ten start, but a couple of mistakes set him back. He charged hard and took his Suzuki RM-Z250 back up to a points-paying position before the checkered flag flew.

"In Moto 1 I had a decent start and kind of settled into 13th the whole moto," Schwartz recounted after the dust had settled. "In the second moto I pulled a great top ten start, but unfortunately on the opening laps I tipped over, which put me back. I had another tip over later, but only lost one spot that time. It was not the best weekend, but we live and learn and I'm excited for the next one!"

Stepping away from competition with a medical condition, BarX/Chaparral/ECSTAR Suzuki racer Derek Drake will undergo heart surgery to address a condition that has been affecting his racing and his life. The team and fans all wish him a full and quick recovery from the procedure.

"…Since I can remember I’ve had to manage and live with a rare heart condition.," Drake shared in an Instagram post prior to the RedBud round, "I never knew this condition would affect me so much when it came to my fitness and health as a pro athlete. The last two years I've been training and suffering every day and I’ve been getting nowhere. I just thought I needed to train harder, and I just buried myself… I decided to put my health first and this month I plan to undergo heart surgery in hopes that I may move forward with ease and heal my body properly. I am taking some time off to get better and I will be back. I can’t thank my family and inner circle enough for going above and beyond for me. I couldn’t be doing this without them."

The racers now face three rounds on consecutive weekends that will take them from the east coast to the west coast. Round five throws the racers into the deep sand in Southwick, Massachusetts. The Suzuki racers have the pace to pull in top finishes, and the deep sand whoops of Southwick may allow sand specialist Max Anstie to turn his strong starts into moto wins.

For more on the teams and their machinery, please visit SuzukiCycles.com/Racing and HEPMotorsports.com.