Dilan Schwartz, in only his fifth professional motocross race, charged through the pack in Moto 1, passing ten riders in the 18-lap race. The steep hills and off-camber corners tested his Suzuki RM-Z250's handling and the high altitude put him and his bike's power to the test – and they passed with flying colors. In Moto 2, Schwartz was again on the move, passing riders and earning enough points for Schwartz's first top-ten overall finish. The performance moved Schwartz up eight positions in the championship title chase.

"Colorado was awesome," was Schwartz's enthusiastic summation of his day. ``I didn’t get the greatest of starts, but I was able to make a bunch of passes and get inside the top ten in Moto 1, which I’m really happy with. I came just a bit short in Moto 2 with a twelfth. Overall, I’m really happy with getting my first top ten overall finish and I'm looking forward to round three at High Point!" 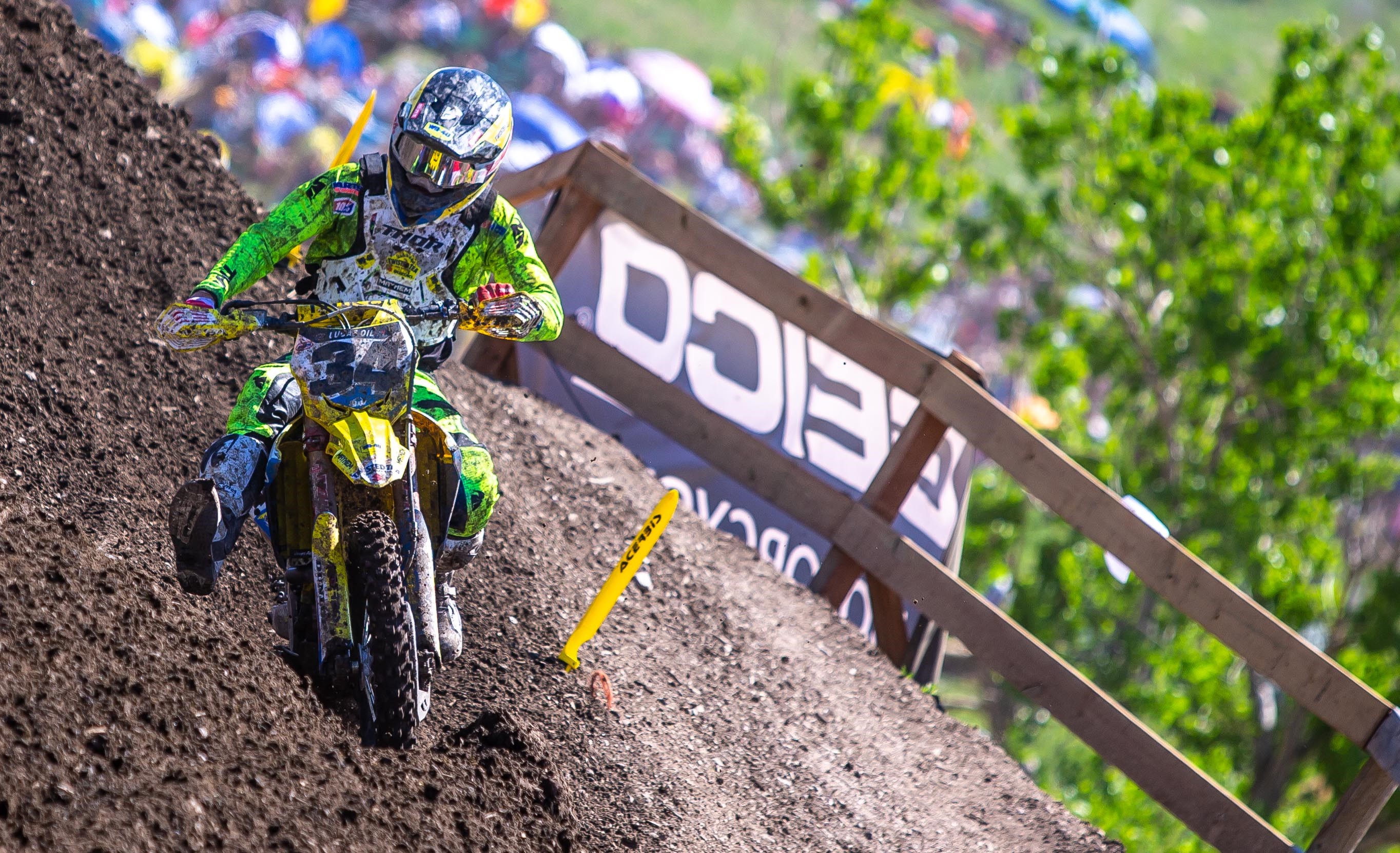 Max Anstie (34) continued his string of solid race performances on his Suzuki RM-Z450.

Max Anstie delivered a consistent day. He and his Suzuki RM-Z450 duplicated their round one finish with steady rides on a track that bit many other riders. Although Anstie didn't improve on what the results page shows, it marked a good event with two good rides; it bodes well for what the Englishman is able to deliver this season.

"I rode strong in both of the motos. I'm just obviously trying to climb my way up and have good battles," Anstie said after the race. "We want to be further up and we'll keep working. I'm looking forward to having this two-week break now before round three to go back to the drawing board and try and work on some things. I definitely feel like the team and I are in a good spot and we're going to keep progressing from here."

Brandon Hartranft charged hard through the ruts for a day marked by consistency for the 450- class rookie. His skills pulled him up two positions in the season point standings and the New Jersey native is likely to show even better results once the series moves back east for the next round.

"The track this morning was fast. I took advantage of that and qualified 14th, which was a pretty solid spot." Hartranft told, then covered the racing, "In Moto 1 I got a mediocre start then fell into my own pace and ended up 18th. I'm not happy with that finish, but it's a step in the right direction compared to last weekend when I fell in the first moto. In the second moto I had a good start, I think I was in the top ten. I got shuffled back a little bit early in the race; I wasn't taking the best lines so I was a little bit uncomfortable. The track was pretty chattery by the end of the day. Then mid-moto I changed up my lines and started clicking some laps away and I ended up 17th, which gave me 17th overall. I'm making improvements every time I get on the bike so we're looking forward to High Point."

"It was an up and down day at Lakewood," explained Dustin Pipes, Twisted Tea/H.E.P. Motorsports/Suzuki Team Manager. "Qualifying in general hasn’t been the best for us the first few rounds and it’s definitely an area where we need to improve. Once we fix that, it will have a drastic impact on the rest of the day. Better starting positions will lead to better starts and staying out of the chaos in the first few laps. The team has some new parts to test before round three where we hope to find some more speed." 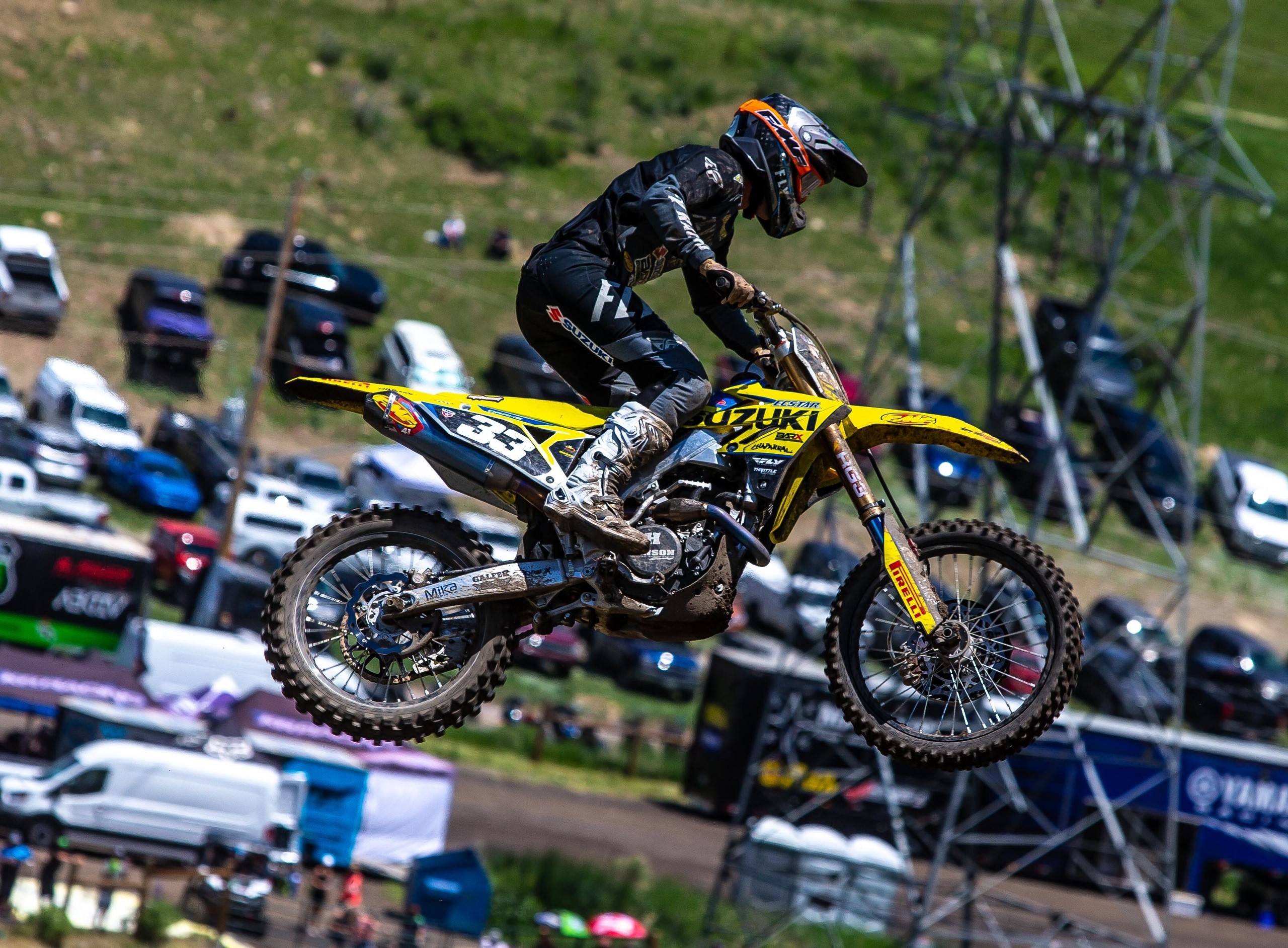 Derek Drake turned two tough luck starts into two brilliant rides, slicing through the pack to pass a total of 22 riders over the two motos. Although the results sheet doesn’t reflect the 250-class racer's potential, his aggressive riding and never-quit attitude will show some strong finishes the team knows he will produce this summer.

"Thunder Valley was a tough weekend," was Derek Drake's assessment. "I just need to get a good start and run up front. Just a few steps forward will really turn things around this season."

The AMA Pro Motocross Series takes one weekend off before returning to High Point Raceway in Mt. Morris, Pennsylvania on June 19th. The abbreviated and truncated schedule last year did not race High Point, and the Suzuki racers and teams are excited to be headed back to the historic U.S. track that, other than in 2020, has been a part of the circuit since 1977.

For team news throughout the season, please visit SuzukiCycles.com/Racing and HEPMotorsports.com.