Redesigned for 2019 and ready for battle, the RM-Z250 marries the sleek, race-ready appearance of the RM-Z450 with an upgraded engine and a list of chassis changes to achieve superior performance. Using Suzuki's RUN, TURN and STOP philosophy, factory engineers have made the 2019 RM-Z250 an even more formidable competitor. The RM-Z250 has always set the standard as the best-handling 250 on the track. Now, the 2019 edition has more power, thanks to a host of changes that include a new cylinder head and dual injector EFI, to boost performance through the entire rev range. The frame and...
Find a Dealer 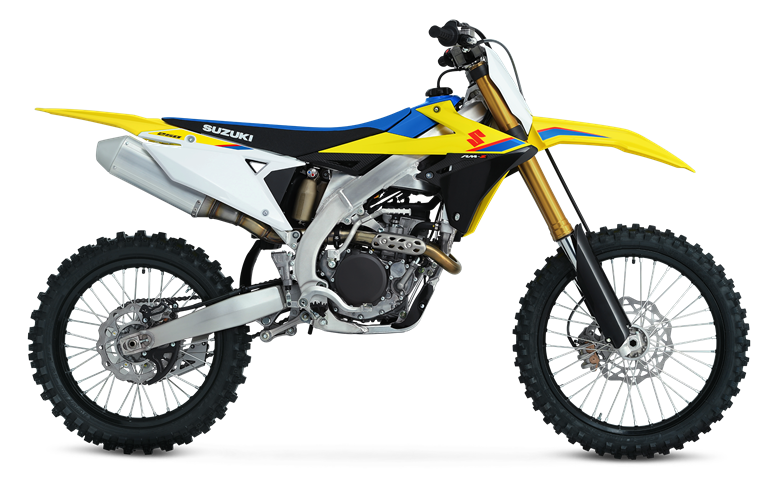 - Updated Suzuki Holeshot Assist Control (S-HAC) gets you out front

- New, compact rear master cylinder is designed to prevent mud from collecting on it and from catching on the rider’s boots

- Fuel couplers are included for quick and easy EFI tuning

Fitted with a new cylinder head and other improvements for 2019, the fuel-injected, 249cc, liquid-cooled, four-stroke, four-valve, DOHC engine remains proven and reliable.

The cylinder head features a new intake port shape and finish that fine-tunes the fuel/air charge into the combustion chamber to increase engine output.

For the first time on a Suzuki MX model, twin fuel injectors are used. The fuel/air mix created by both injectors improves charging efficiency and increases high rpm power.

The primary fuel injector is at the bottom of the throttle body and sprays fuel at the butterfly valve to improve fuel and air atomization. The secondary injector is positioned in the air cleaner inlet duct so the fuel and air have more time to mix and cool before entering the engine.

The new throttle body eliminates complex control linkage, so the rider feels a more direct connection to the engine.

The intake camshaft profile is new, with more valve lift, increasing power at all engine speeds.

The cam chain tension adjuster and guide have been redesigned to reduce friction and mechanical loss.

Engine starting remains simple, due to a proven kickstarter and automatic decompression system that works precisely and efficiently (eliminating the need for a heavy and costly electric start system).

The new, high-flow exhaust system has a longer head-pipe, tapered mid-section, and multi-layer silencer that has better flow through the entire rev range, with an emphasis on low-rpm performance.

The new exhaust silencer is a four-layer design that enhances performance and maintains compliance with AMA sound regulations.

New resin engine protectors help guard the coolant pump (on the right) and the stator cover (on the left) from debris and stones.

- For quick fuel adjustments to suit riding conditions, two couplers are provided. One is for a richer-than-stock and another for a leaner-than-stock fuel setting. Riders can change fuel settings in seconds by simply connecting either coupler to the wire harness.

The 2019 RM-Z250 features an evolved and faster traction management system. The Electronic Control Module (ECM) continually measures throttle opening, engine speed, and gear position, and then adjusts the ignition timing and fuel injector duration to fine-tune the engine output to deliver the best traction for the riding conditions.

- The RM-Z250’s traction management system is different from a street bike traction control system, as it does not measure rear tire spin. Because the needs of a motocrosser are different than a street bike, this system offers constant adjustment that maximizes traction at all times.

The Suzuki Holeshot Assist Control (S-HAC) is a selectable launch system derived from the factory race bike to help riders’ takeoff from the starting gate for an early lead.

- To aid riders at the moment of launch, there are three stages of power adjustment from the S-HAC system: 1) the moment of initial launch, 2) when crossing the starting gate, and 3) acceleration up to full-speed.

There are three S-HAC modes riders can choose for the best option per their skill level and starting conditions. The S-HAC settings for both launch modes on the 2019 RM-Z250 are updated to help the rider control engine speed during starts.

A-Mode: For hard surfaces or slippery conditions at the starting gate. In this mode, S-HAC alters ignition timing at the moment of launch and the ride over the gate to reduce wheel slip to deliver a smooth takeoff. It also advances ignition timing during this sequence for stronger acceleration. After six seconds or when you reach fourth gear, the system shuts off and returns to normal ignition timing.

- Benefit of A-Mode: For novice riders, and/or hard and slippery traction conditions, use A-Mode for a more controlled launch.

B-Mode: When conditions at the starting gate have better traction, and a more aggressive launch is desired. S-HAC will advance the ignition timing to allow increased throttle response and stronger acceleration off the line. The ignition timing alternation is in a similar sequence as A-Mode, but with increased overall timing. One of three conditions will return the ignition to normal operation (whichever happens first): After six seconds or when you reach fourth gear, the system shuts off and returns to normal ignition timing.

- Benefit of B-Mode: For skilled riders, and/or good starting conditions, use B-Mode for a more aggressive launch.

Base Mode: Standard power launch, no action required on the S-HAC switch.

The five-speed transmission is updated with a new second gear ratio and overall final ratio to match the engine’s stronger output for better acceleration and top speed.

True to Suzuki transmission standards, the gear shift operation is smooth and precise. Carefully designed parts like the precisely machined shift cam and corresponding gears create a transmission a racer can rely on.

The multi-plate, wet-clutch uses a rack-and-pinion clutch release mechanism for precise feel of the engagement and disengagement points while riding.

The 2019 RM-Z250 features a new frame and swingarm design that continues Suzuki’s reputation for creating the best-handling motocross motorcycles.

The new frame is 370 grams (0.8 pounds) lighter but has a 10 percent increase in torsional rigidity.

The position of the engine in the new frame is changed so the crankshaft sits higher in the chassis to further the bike’s nimble handling characteristics.

The design of the rear, upper engine mounts has been updated to a pair of mounts that are outboard of the cylinder head to increase rigidity and allow a direct intake path to the engine.

The engine mount material is changed to aluminum from steel to reduce weight.

The new swingarm is shaped using an innovative hydroforming process that maintains strength but reduces weight by 0.6 pounds (270 grams).

New hexagonal aluminum rails are used on the sub-frame for lighter weight, a slimmer appearance, and easier air filter access.

The sub-frame rails are moved inward to slim the bodywork but are also raised to provide additional space for the larger air cleaner.

Not only is the new sub-frame narrow, but all of the body work is slim, so the rider can move freely in the cockpit, especially during spirited riding.

The new, KYB-supplied shock absorber has a thin-wire spring, spring guide, cushion rubber guide, and lower link that weigh less and have better movement reaction. The new spring and link weigh a pound (447.5 grams) less than the prior parts.

This KYB shock has new damping force circuits and a different rear lever ratio to improve the suspension’s traction characteristics.

The damping force adjusters have a wider tuning range, so the settings can better match the conditions and the rider’s style.

Both fork legs have the same springs and damping force components, so front suspension tuning and maintenance is balanced and easy: a great benefit during frequent riding.

This new fork uses a free-piston design that separates air and oil to optimize the damping characteristics. Other internal changes help control the damping cartridge’s pressure and spring recoil, so the fork action remains supple and precise.

The new Renthal aluminum tapered handlebar has a straighter bend (less pull-back) than prior models to help aid the rider during aggressive maneuvering.

A new, lighter upper fork bracket is used to complement the new front suspension and handlebars.

The brake pad material is also changed to improve performance, plus the new front brake lever is a push rod type that more effectively transmits the squeezing force that the rider applies to the master cylinder.

A new design rear brake master cylinder hugs the frame beam to reduce dirt contamination and the chance of the rider’s boot touching it during riding.

To match the handling potential of the 2019 RM-Z250, the wheels are fitted with racetrack-developed Dunlop Geomax MX33. Additionally, the rear tire is nearly a half-pound (160 kg) lighter than the tire used on the prior RM-Z250.

Suzuki beak-inspired styling has a sharp front fender and radiator shroud shapes that blend into the frame’s side covers and an upswept tail, to promote the impression of speed while reducing weight and easing service.

The functional styling and the motorcycle’s trim chassis permits a variety of rider positions that facilitate control and comfort.

The new plastic fuel tank weighs half-a-pound less than the prior model’s aluminum tank. Fuel capacity is 1.66 US gallons.

The seat base, inner fenders, and side covers were developed to reduce moisture and dirt from reaching the air cleaner. This helps prevent debris from contaminating the air filter.

The new, slimmer seat has revised foam density to aid the rider’s control of the motorcycle. The seat weighs a half-pound less than the prior model’s and has a large gripper panel that runs nose-to-tail on the cover.