Brea, CA (January 23, 2023) – Ken Roczen had the fans on their feet with an inspired ride inside Snapdragon Stadium at round three of the 2023 Monster Energy AMA Supercross season. A fourth-place finish in San Diego moved Roczen and his Progressive Insurance ECSTAR Suzuki RM-Z450 up to fourth place in points for both the Monster Energy AMA Supercross season as well as the SuperMotocross World Championship series.


Twisted Tea Suzuki presented by Progressive Insurance riders Shane McElrath and Kyle Chisholm took home points aboard their Suzuki RM-Z450s in round three, but only the second event of 2023; round two was postponed due to northern California flooding. In the 250 class, Robbie Wageman flew his BarX Suzuki RM-Z250 to a strong heat race and main even result. Dilan Schwartz collected more championship points on his Twisted Tea Suzuki presented by Progressive Insurance RM-Z250. Ty Masterpool and Derek Drake both displayed great speed on their BarX Suzuki RM-Z250 race bikes. 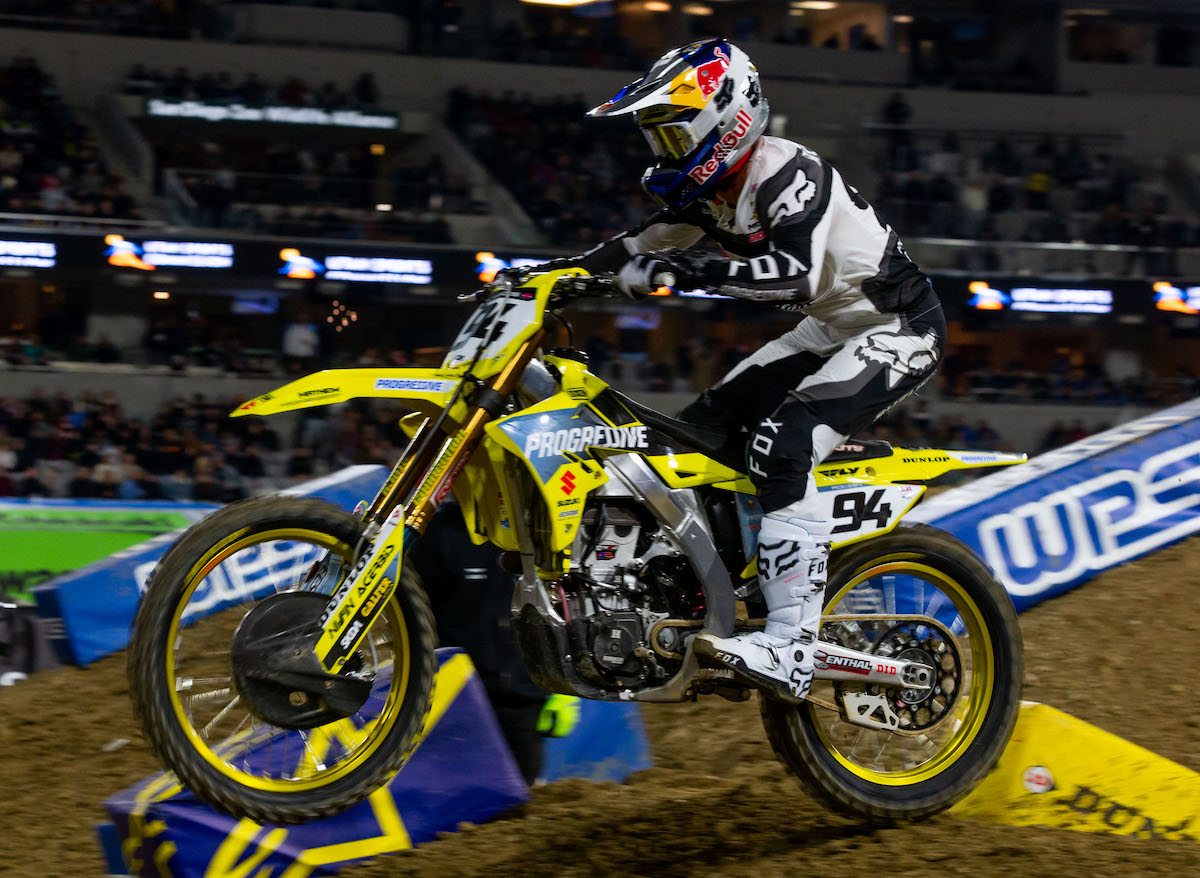 Ken Roczen (94) raced forward at the San Diego Supercross. He missed a podium finish by only 0.6 seconds.

In only his second ride with the Progressive Insurance ECSTAR Suzuki team, Roczen grabbed the holeshot in his heat race. He quickly pulled out a three-second lead and held the top spot for eight laps. In the main event, Roczen passed the holeshot stripe outside of the top ten. He charged forward and passed eight riders to finish the race in fourth place. At the checkers, he was just a couple of bike lengths shy of a podium finish.


"We pulled some big moves this week and made some changes to the bike and treated today a little bit like a test day," said Ken Roczen shortly after the race. "Switching over to Factory Connection suspension set-up was huge and having those guys here with me really made a big difference. We narrowed our window down on some of the changes for the main event, so I was super happy. I had a poor start and came from the back and just overall had a really good main event. I worked my way up. We ended up fourth, but I had a really good battle with Barcia, and I could charge the entire way. I just really enjoyed this race; it was the best race in a long time. So I'm really, really happy with how the team has been working, how I've been working, and good things will happen when we're all pulling on the same string. And we've been putting in serious hours, so there's more to come. The podium is reachable. We're very close so I'm excited to get back to work and we're going to check off weekend after weekend, stay healthy, and just keep working forward." 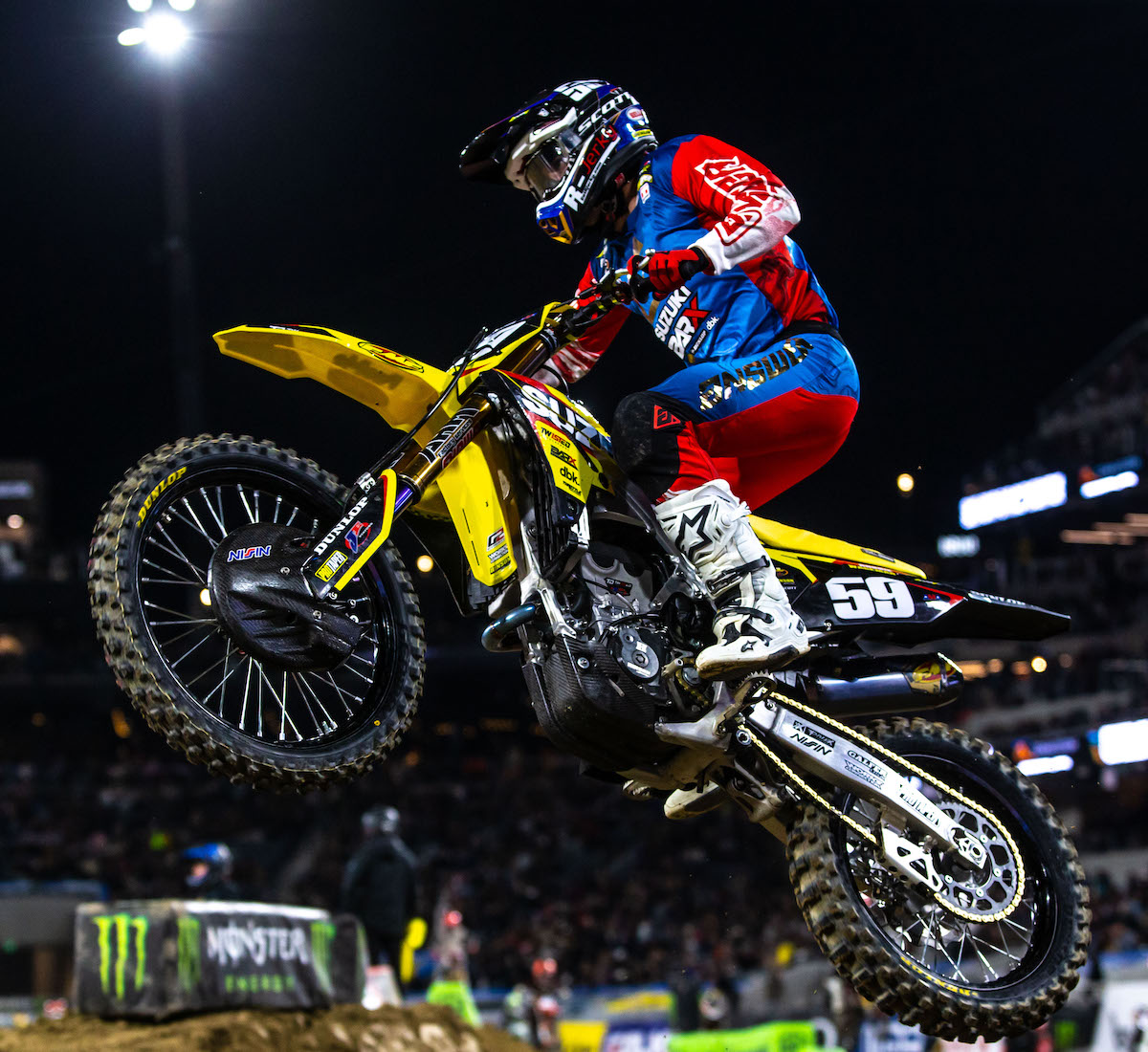 Robbie Wageman (59) had a great heat race start and a great main event charge at the first supercross race held inside Snapdragon Stadium in San Diego.

Robbie Wageman put the power to the San Diego soil and pulled a top-five start in his 250 West heat race. He qualified directly into the main event, but was unable to replicate his great start in the main. From outside the top fifteen Wageman worked his way forward to grab enough points to move up one position in the championship standings.

"I started the day off a little rough but turned it around and made gains with my speed," reported Wageman. "I just need to put it all together and be up front earlier in the main event. I'm looking forward to Anaheim 2!" 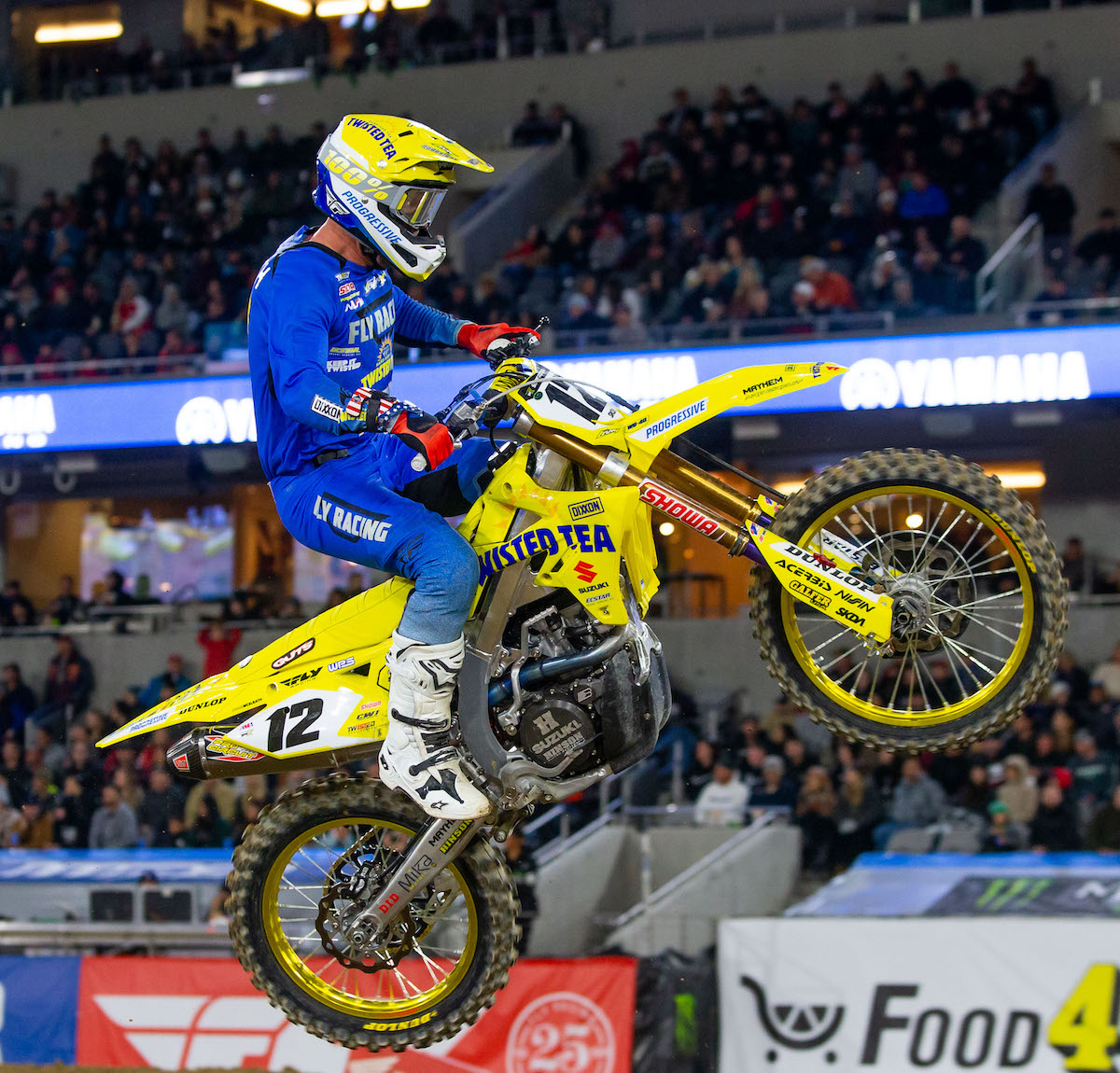 Shane McElrath (12) brought fresh intensity and speed to round three.

Shane McElrath was on the move in his heat race. After a start outside the top ten McElrath pushed forward into a direct qualifying position. Unfortunately, a small mistake erased that progress, and McElrath qualified out of the LCQ. In the main event, McElrath put his speed to good use and advanced his Suzuki RM-Z450 two positions from his start spot.

"The main event, for me, honestly went really well," said McElrath. "For me, the track was the best in the main event. We're making really good progress on the bike. Just getting to ride those rough lines, the race lines, that's what I need time doing. So I’m excited to build off of this.” 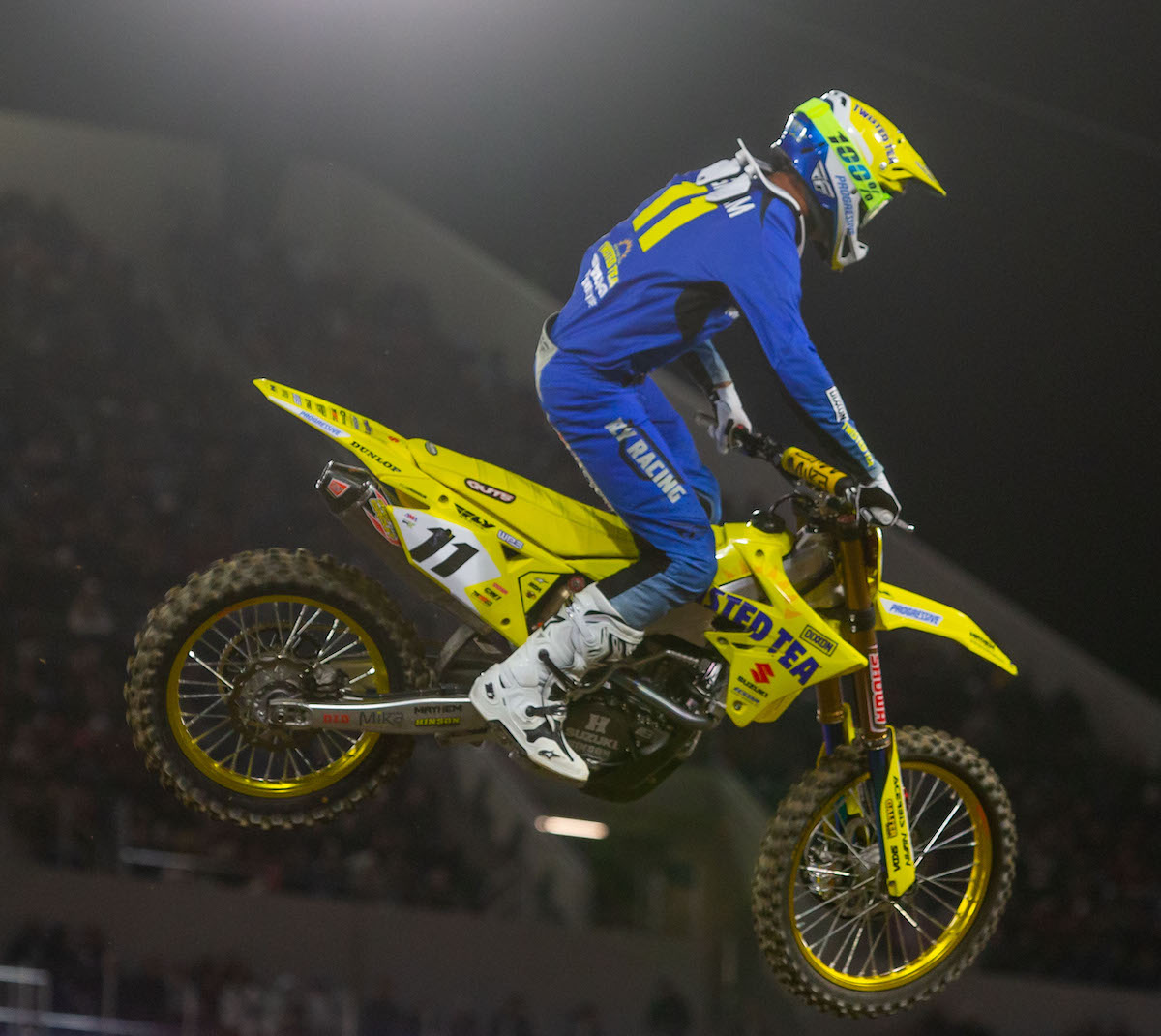 Kyle Chisholm (11) put his Suzuki up into the lead group in his heat race in San Diego.

Kyle Chisholm flew wingman to Roczen in their heat race. With Rozcen in the lead, Chisholm battled inside the top five at the beginning of the race and held strong to qualify directly into the main.

"The heat race was good, I ripped a fine start. It was nice to race up front a little bit," Chisholm reported. "I'm happy with the bike, just getting that suspension dialed in. So we'll get back to work this week, come back to Anaheim again, and try to get that top 15 and work closer to the top ten." 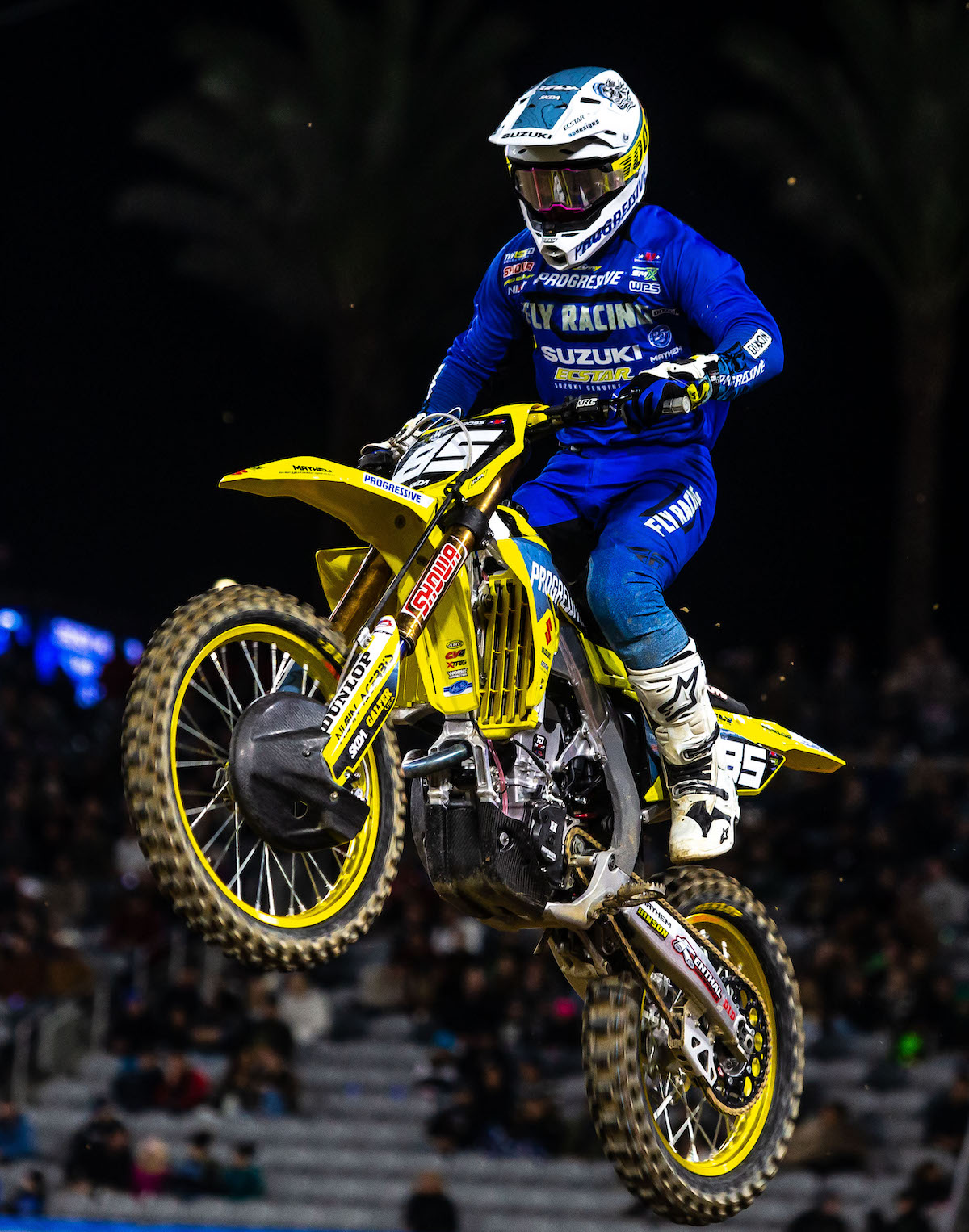 Dilan Schwartz turned a fast heat race ride into a direct transfer in the main. A small tip over in the main cost him positions, but he remounted and finished the night in the points.

"We made big improvements from A1, I just have to stay off the ground in the main event," said Schwartz. "I'm feeling a lot more confident now, my speed's getting better, so I just have to put myself up there and run with the top guys and we'll get a good result." 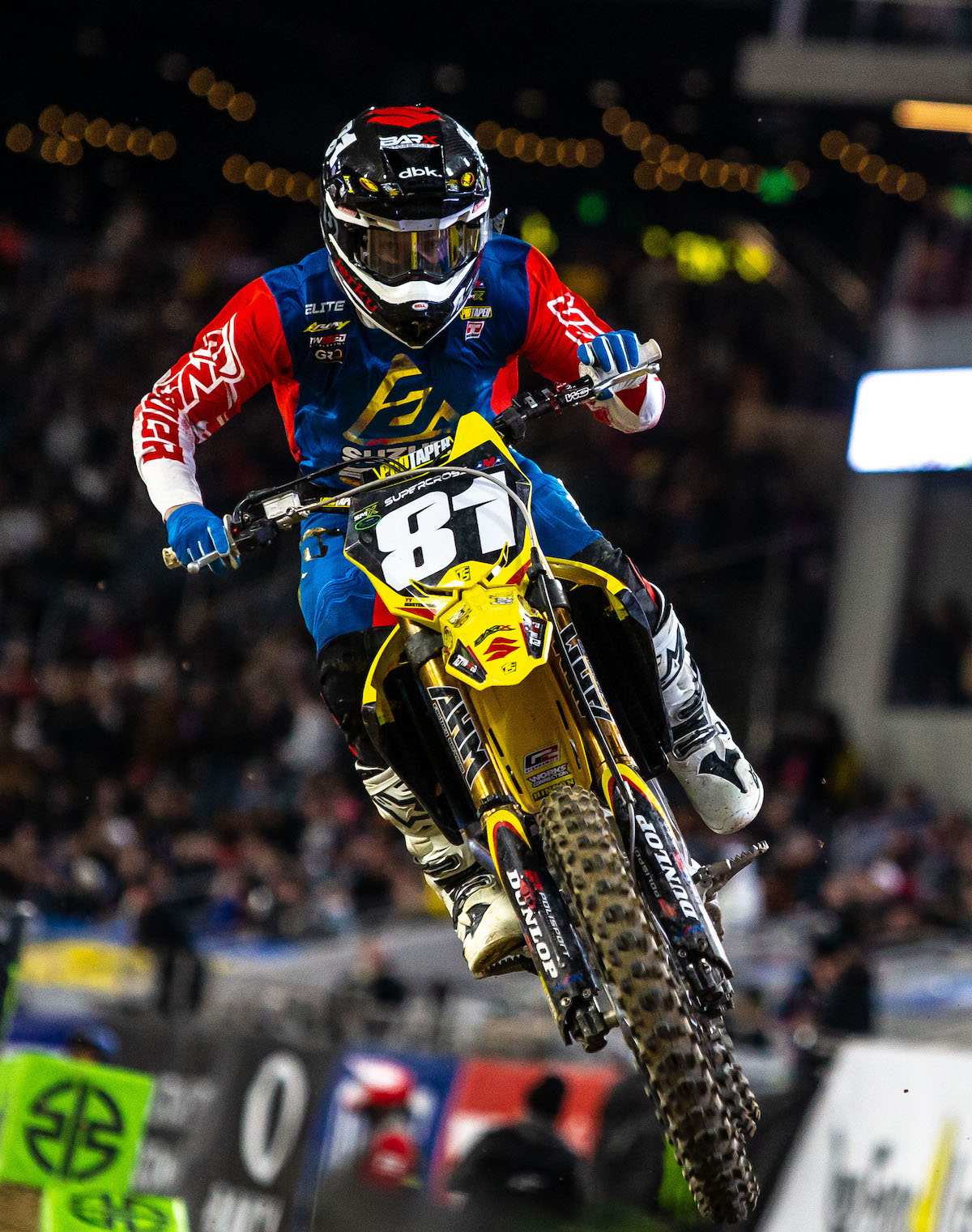 Ty Masterpool (81) fought a flu bug as much as his competitors at the second race of the supercross season.

Ty Masterpool gutted out an inspired performance as he fought the flu that's prevented training and much race day energy.

"It’s certainly not the way I wanted my supercross season to begin" Masterpool shared. "After just having a few days of supercross riding before getting on the Suzuki, which I liked from the first time I rode it, and then only two hours on the Suzuki race bike before Anaheim 1, which I liked even more, I got knocked down with the flu. I just tried to survive through Anaheim 1. Over the next two weeks, I didn’t get better, I just got worse. I have lost 12 pounds. I did the best with what I had. I’m certainly not happy with the results, but this year was for the experience, and I’m certainly getting a pile of it." 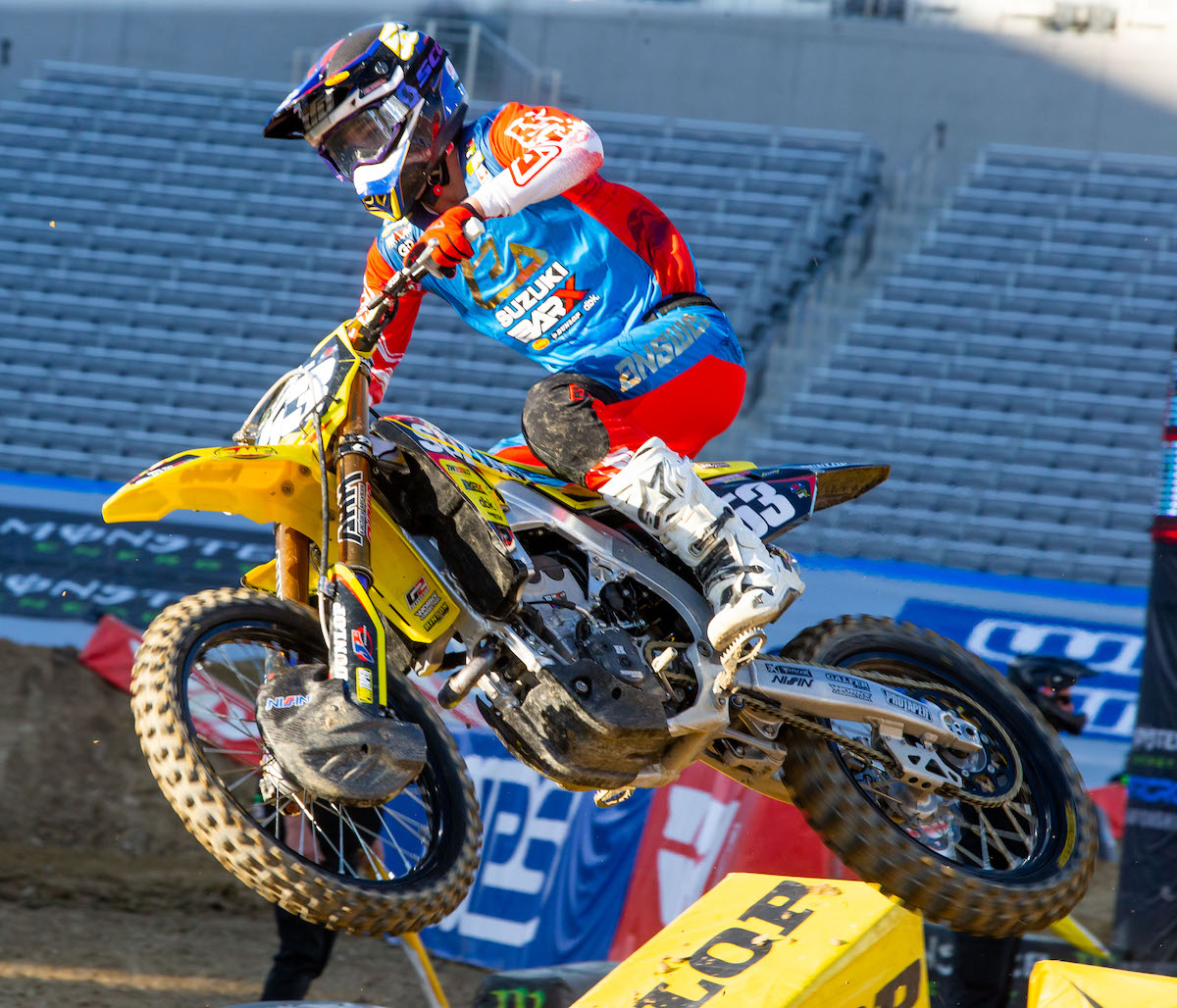 Derek Drake (53) opened the night's racing with a top-three start in his heat race.

Derek Drake put his RM-Z250 into the top three off the start of the night's first heat race. Unfortunately, another rider in traffic crossed in front of Drake causing a three-rider crash.

"San Diego was going well, but unfortunately, half a lap into the heat race I came together with another rider and hurt my shoulder, and that's all she wrote," reported Drake. "I'm looking forward to hopefully being behind the gate at A2 next weekend."

"Ken Roczen almost won his heat race and had a little issue at the end and finished second," said Larry Brooks, Team Manager of the Twisted Tea/H.E.P. Motorsports/Suzuki presented by Progressive Insurance team. "Chisholm qualified through his heat race and McElrath through the LCQ. With Dilan Schwartz, we had a little tip over in the main event but he's improving every weekend."

"We improved our times all through qualifying. Traction was great and we had to adjust the bikes' power to help keep the front ends down exiting turns," reported BarX Suzuki Team Manager Buddy Antunez. "We haven't reached our potential in the night show yet and the whole team is looking forward to Anaheim 2."

The Monster Energy AMA Supercross series travels back to Angel Stadium of Anaheim for round four of the series, yet it will be only the third race thus far. The postponed round two is back on the calendar for February 18th at its venue in Oakland, California.

You can find more team news on the Suzuki racers at SuzukiCycles.com/Racing/Motocross and HEPMotorsports.com.