BREA, CA – November 14, 2022 – Displaying the speed that made it a championship contender throughout the season, the Vance & Hines/Mission Suzuki Pro Stock Motorcycle team brought down the curtain on the 2022 NHRA season with its seventh number-one qualifying performance of the year but was unable to advance past the second round of eliminations at the NHRA Auto Club Finals at Auto Club Speedway in Pomona, California, on Sunday.

With a combined 13 Pro Stock Motorcycle championships and more than 150 NHRA national event wins between riders Angelle Sampey and Eddie Krawiec and crew chief Andrew Hines, himself a six-time champion as a rider, the Vance & Hines/Mission Suzuki team brought decades of race-winning experience to the starting line in its first season under Suzuki sponsorship. The team approached the season with high expectations but struggled to deliver consistent results during an up-and-down season, notching only a single win during the campaign. The team has already set its eyes on year two of the relationship with renewed expectations.

Consistently having the fastest bike in the field, Sampey earned the top qualifying spot on her Suzuki Hayabusa for the sixth time in 15 races this year. Her 6.703-second/201.61mph blast on Friday reset the Pro Stock Motorcycle track record at the fabled Auto Club Raceway, which has been the home of the NHRA Finals since 1984. It was the 59th top qualifying performance for the three-time class champion, who with 46 career wins is the winningest female racer in NHRA history. 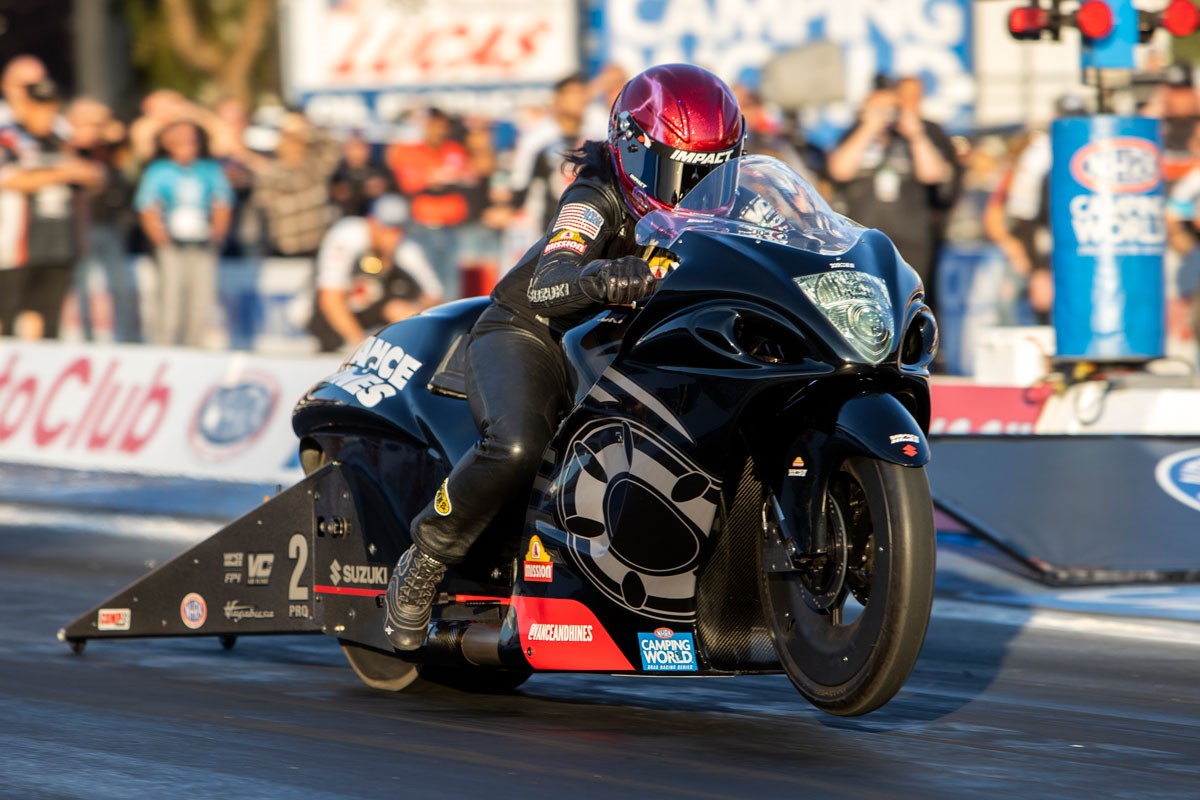 Angelle Sampey (2) finishes the 2022 season with her 59th top qualifying position and sets a new track record at Pomona.

Sampey got a free run in the first round of eliminations against non-starter Katie Justice, running a 6.829-second/192.17mph pass to automatically advance. But in a repeat of the starting-line woes that plagued her for much of the season, Sampey lost in the second round on a redlight foul despite making a 6.732-second/202.18mph run that would have easily covered Steve Johnson’s 7.126-second/152.80mph run.

“I had the best motorcycle at the race track all year long, and for one reason or another, which was just about all the time my fault, I didn’t win more races. It’s a very disappointing end to the season. I hoped I could turn it around and finish the last race on a high note. I had the motorcycle to do it once again,” said Sampey, whose season highlight was the team’s sole win at the Summit Racing Equipment NHRA Nationals in Norwalk, Ohio, in June. “I’m not sure what has been going on with me mentally for the last half of the season, but there’s nothing I can do to change it now. I am very grateful for the opportunity I was given to ride such an amazing piece of machinery. My team is amazing. They’ve done a great job and I couldn’t be prouder of them. I just wish that I could have given them a better performance. I’m happy to have gotten number-one qualifiers and one win, but it should have just been so much more and that’s all my fault. As far as next year, I don’t know what's going to happen yet, so I can’t really comment on that.”

Compounding the team’s disappointment in Pomona, Eddie Krawiec suffered through a series of frustrating electrical issues during qualifying that resulted in his first failure to qualify for an NHRA national event since the 2007 season. It was a disappointing end to the season for the four-time Pro Stock Motorcycle champion, who was the top qualifier at the Norwalk race but failed to win a race for the first time since 2009. 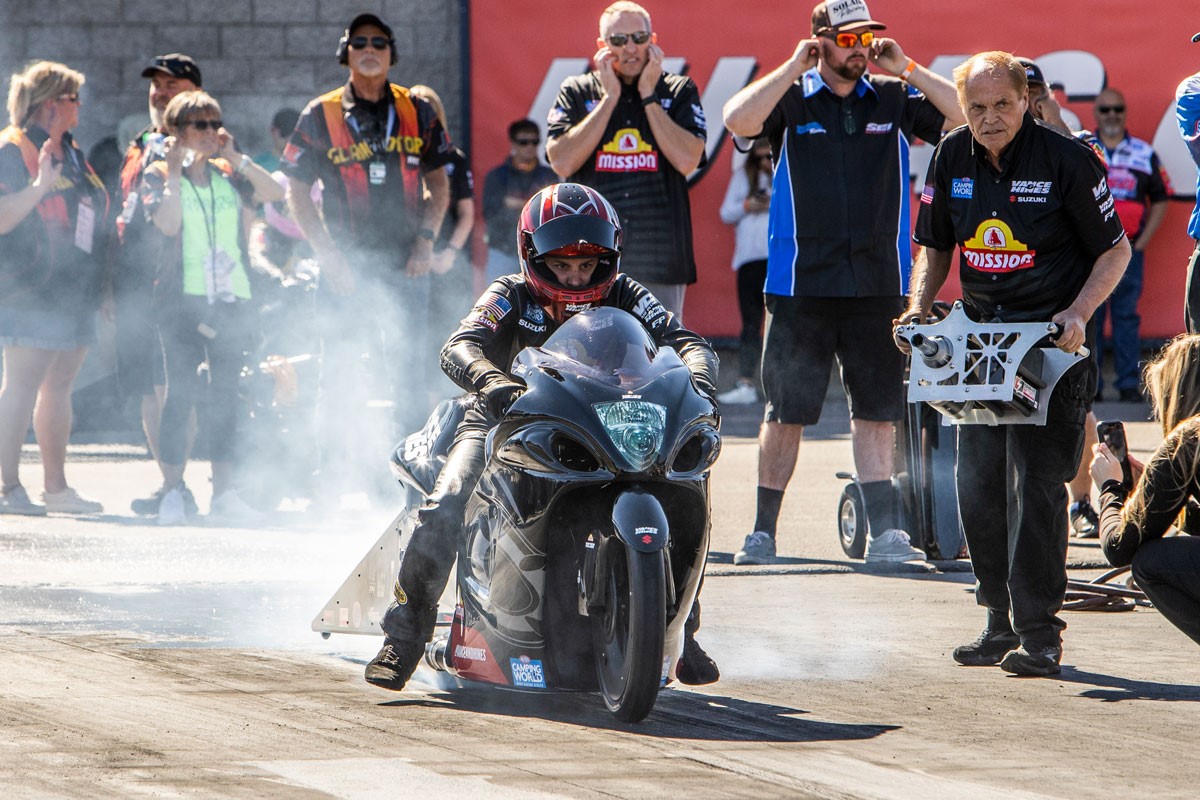 After a tough 2022 season, Eddie Krawiec (4) is putting this season behind him and staying optimistic for the 2023 season.

“My bike picked up an electrical gremlin and we struggled all weekend trying to find it. By the fourth qualifying session, we had changed every electrical part of the motorcycle and even changed the engines. It was a struggle and it wasn’t for lack of effort, but I am ending the season on a low note. It’s the first time in 15 years not racing on Sunday. But we’ll get it straightened out, test during the winter off-season winter, and be more determined than ever to come back and fight for a championship,” said Krawiec, who looked forward to the 2023 season with optimism. “All in all, this race does not reflect on the overall season I had, which was a good one. It was a year of generating data and a better understanding of how to run the motorcycle. We didn’t expect to set the world on fire but did expect to be a little better. Next year will be very innovative for the Suzuki teams, and it’s great to have a hand in that. So I’m excited to come back out and race for the championship.”

Crew chief Andrew Hines put the tough race weekend behind him and looked forward to spending the off season focused on new research and development projects that will advance the Vance & Hines Suzuki program’s strong performance to an even higher level.

“We fell into a bad situation here in Pomona, but we showed we can run strong at the front. Seven number one qualifiers is no small feat. Our performance is better at the end of the season than it was at the beginning,” Hines said. “This year I learned a lot being out of the seat, about where I need to focus my efforts and it made me a better all-around crew chief. I’m excited about what the future holds for Suzuki and Vance & Hines. We’re going to come out strong and fast and make sure these Hayabusas are leading the pack again.”

With the conclusion of the 2022 NHRA season, Sampey and Krawiec finished sixth and seventh in the final Pro Stock Motorcycle standings with 2,353 and 2,306 points, respectively.

The Vance & Hines/Mission Suzuki team will resume competition in 2023 when the Pro Stock Motorcycle class opens its season March 9-12 at the Amalie Motor Oil NHRA Gatornationals at Gainesville Raceway in Gainesville, Florida.