BREA, CA – September 19, 2022 — Vance & Hines/Mission Suzuki riders Angelle Sampey and Eddie Krawiec opened their championship runs in the first round of the NHRA Pro Stock Motorcycle Countdown to the Championship by advancing to the second round of eliminations at the NHRA Pep Boys Nationals at Maple Grove Raceway on Sunday.

After making the cut for the 10-rider Countdown two weeks ago at the U.S. Nationals, Sampey began the weekend by qualifying her Suzuki Hayabusa in the fourth starting position with a 6.782-second/201.07 mph run on the same track where she recorded the first win of her professional career in 1996. She won her first-round matchup against Jianna Evaristo on a holeshot, taking advantage of a quicker starting line reaction time to win with a near-identical elapsed time of 6.904 seconds at 199.23 mph compared to her opponent’s 6.903-second/194.16 mph pass. Unfortunately in round two, the shoe was on the other foot. Despite making a quicker and faster 6.902-second/197.19 mph pass, Sampey came up just inches short at the finish line against Marc Ingwersen, who ran 6.962-seconds at 194.72 mph. 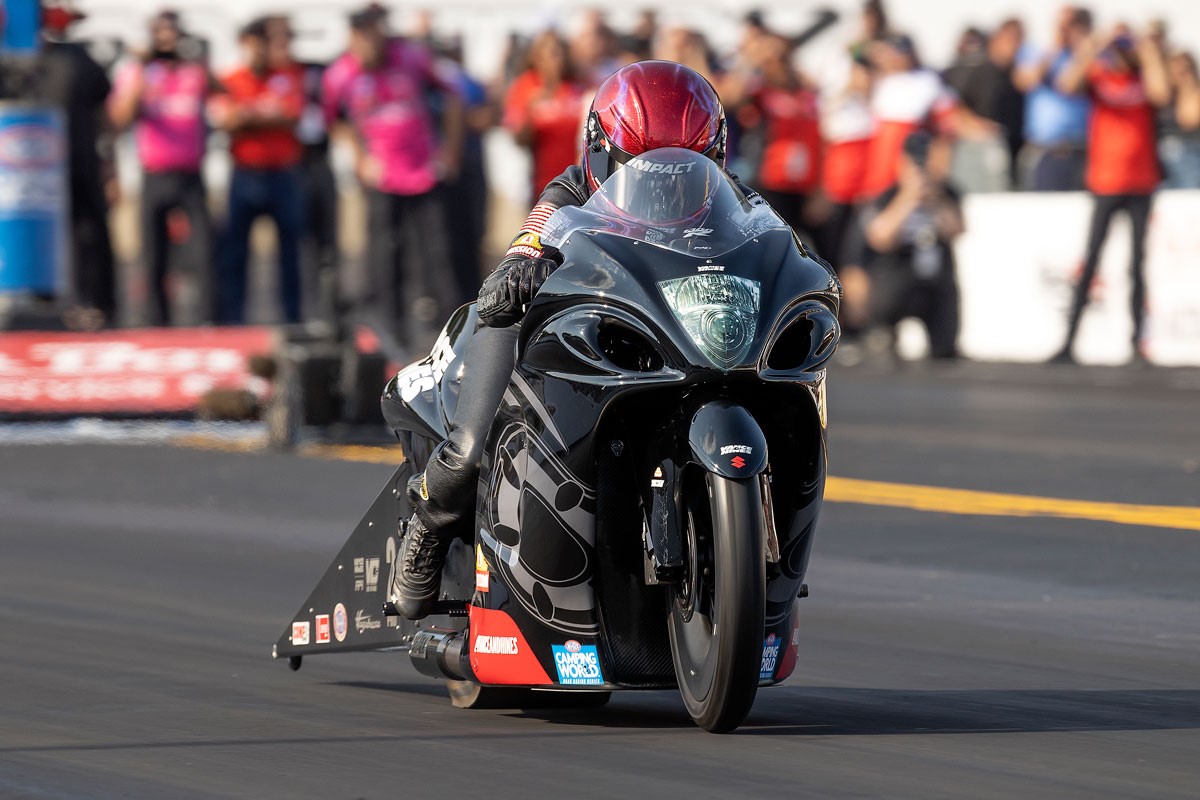 Angelle Sampey (2) looks to bounce back in the Midwest Nationals after a tough weekend in Maple Grove Raceway.

“My slower reaction time is part of why I lost the round, but the major reason I lost was because I totally missed the second-gear shift,” Sampey said. “It hit the rev limiter hard and that’s where the whole run went wrong. Marc gave me a big open door and I screwed it up with the missed shift, which isn’t normal for me. But I’m going to keep my head held high like I did after Indy and work even harder. The things I worked on helped me win the first round today with a good light, so I’m going to go home and work some more. I’ve just got to keep digging. That’s all I can do.”

Countdown qualifier Krawiec placed the team’s other Suzuki Hayabusa in the seventh starting position with a 6.797-second/198.44 mph run in Saturday’s qualifying session. In round one of eliminations, he ran 6.795 seconds at 198.44 mph, his fastest pass of the weekend, to advance past Karen Stoffer, who fouled at the starting line. Facing Angie Smith in the second round, he too fell victim to a holeshot loss, his 6.815-second/198.50 mph pass losing by a 0.0051-second margin to Smith’s 6.841-second/198.90 mph run. 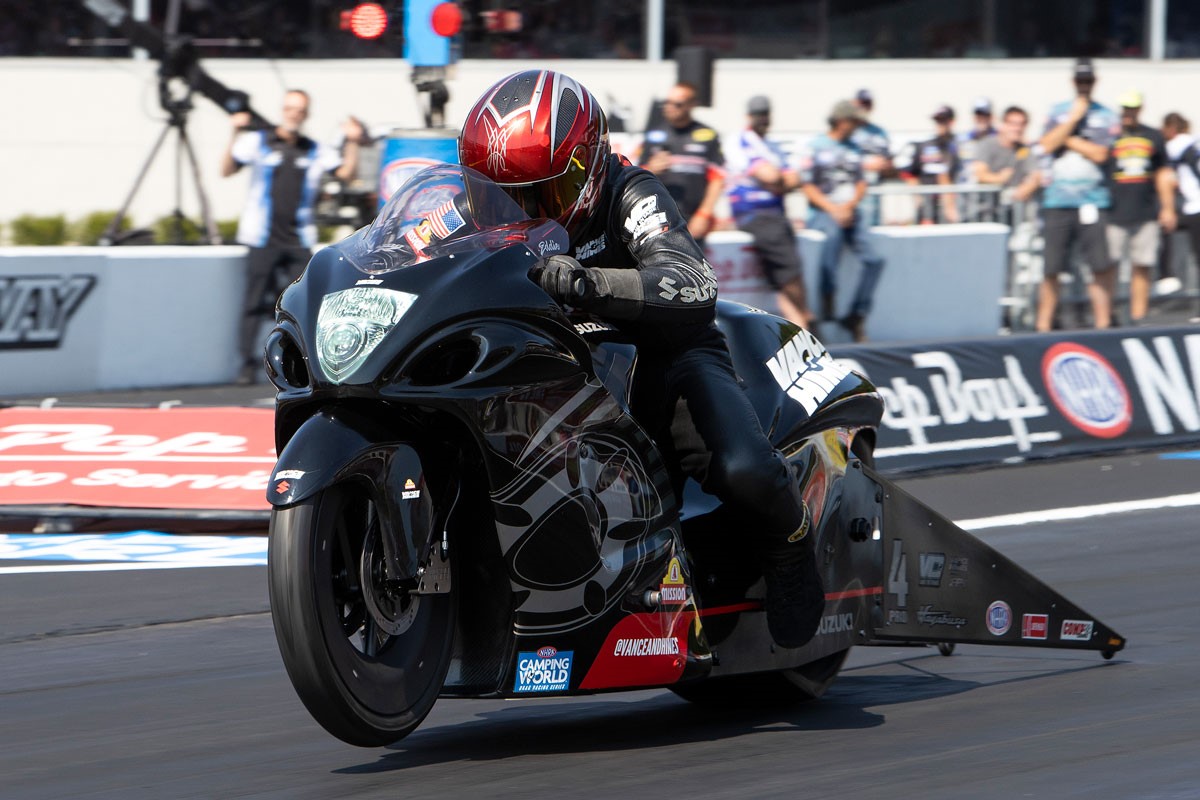 After a tough qualifying, Eddie Krawiec (4) narrowly gets beat at the line by less than five-thousandths of a second.

“I had a good motorcycle this weekend. I think it was the bike to beat, but I struggled with hitting the tree. Certain races you’re on it, other races you aren’t,” Krawiec said. “But this is not the time of year you can be late. I have four races left and all four races I’m going to have to be perfect on every single run, every round. That’s my goal leaving here. Everybody ahead of me in the points chase has a fast bike, so it’s going to be a fight to make sure we’re right on every single run.”

Crew Chief Andrew Hines was happy with the speed of the team’s motorcycles but acknowledged that there is a lot of ground to make up over the season’s remaining four races.

“It’s not the way we wanted to go out, but we got some points today. Luckily some other people in the top ten lost at the right time, but it will still be a tough row to hoe these next four races,” he said. “We tried some cool things on Angelle’s bike this weekend that allowed us to see some potential. Going over 200 mph every run during qualifying was nice to see, so our Suzuki’s have great top speed and elapsed time potential for the rest of the countdown. Coming up, St. Louis is hit and miss for weather. Being in late September, early October, we could get 90-degree weather, or we could get 55-degree weather. We’ve had both ends of the spectrum there. Historically, it’s been a very fast event for us. Hopefully, we can go out there and do some damage to the rest of the field.” 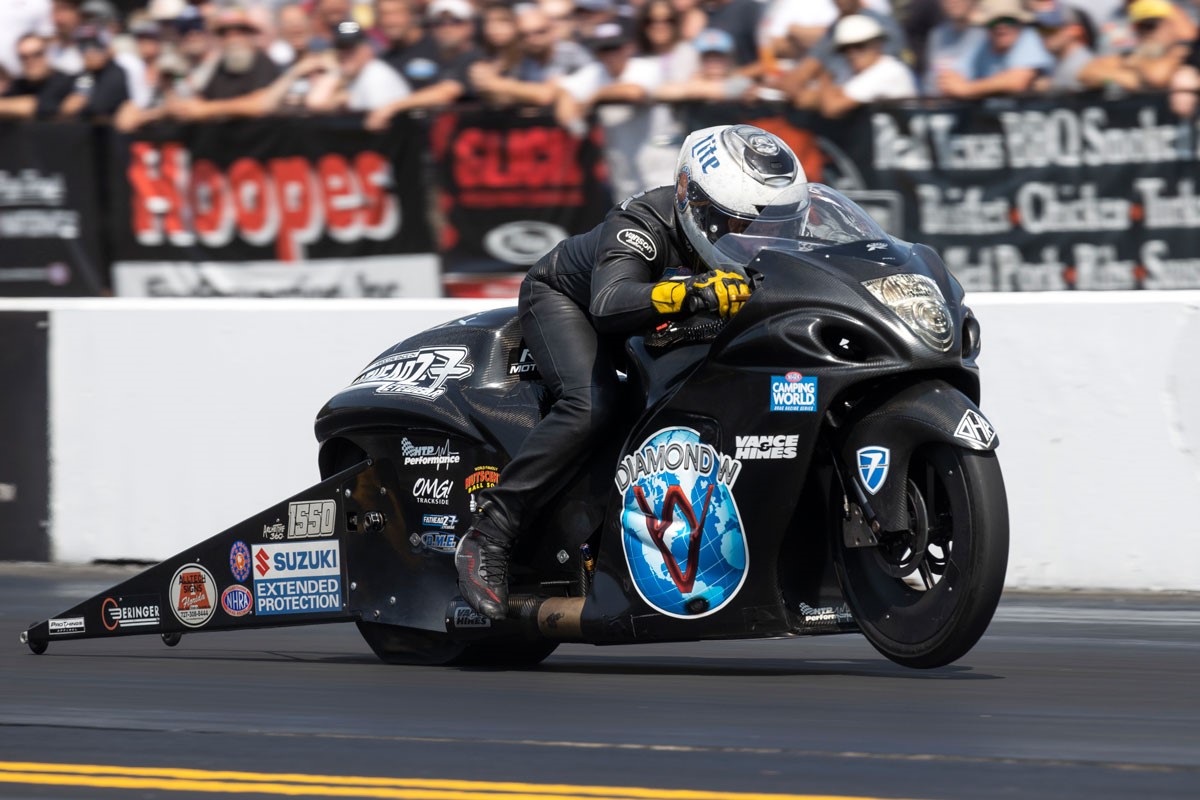 With four rounds remaining in the Countdown to the Championship, Sampey and Krawiec currently sit in fifth and seventh positions with 2,115 and 2,103 points, respectively. Suzuki-mounted race winner Joey Gladstone leads the standings with 2,193 points with Suzuki-powered Pro Stock Motorcycles continuing to dominate the class.

The Vance & Hines/Mission Suzuki team will be back in action September 30 through October 2 at the NHRA Midwest Nationals at World Wide Technology Raceway in Madison, IL.