Superbike stalwart Jake Lewis leaned upon his vast experience to climb up through the field in Sunday’s wet premier-class contest. The Kentuckian started from the back of the grid due to a last-second pre-race tire change and found himself mired down in 14th position early with the rain coming down, but steadily improved his outlook with a confident, measured ride aboard the team’s Vision Wheel M4 ECSTAR Suzuki GSX-R1000R.

Jake Lewis (85) collects a pair of top tens in the penultimate round of the championship.

Already firmly entrenched inside the top ten, Lewis picked up a few more positions late when the precipitation stepped up on the race’s final lap, ultimately claiming sixth place at the checkered flag to lead a five-strong Suzuki GSX-R train that all finished inside the top ten.

“It was a tough race in rainy, mixed conditions, but it was a good race for us,” Lewis said. “It started raining a lot harder two minutes before the start and we changed to wet tires. I planned to go out on slicks but obviously, that changed. We started from the back of the grid and passed a bunch of riders. Given the challenges, our main goal was to keep it on two wheels, and we accomplished that.” 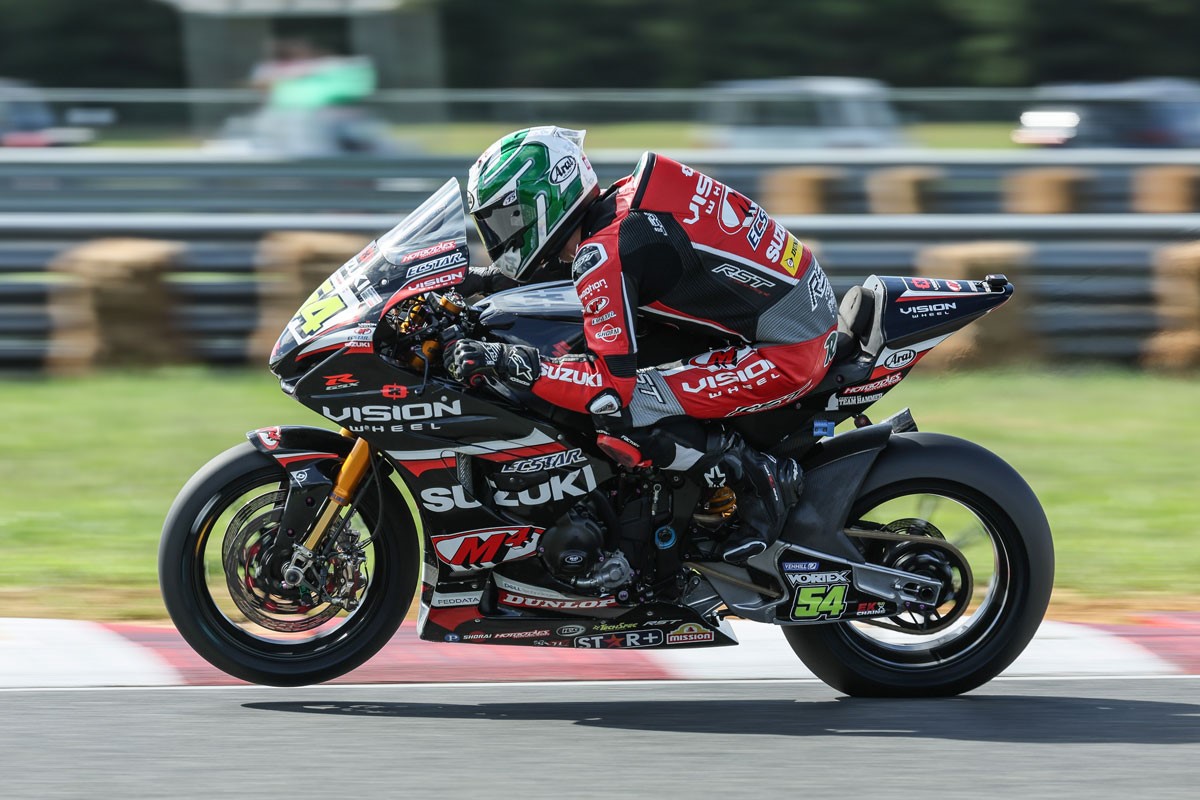 With challenging conditions, Richie Escalante (54) finishes in 13th place aboard his GSX-R1000R.

In the MotoAmerica Supersport competition, Tyler Scott was once again a factor up front despite his very participation being questionable, after suffering a left-hand injury in Saturday’s race. Scott ran as high as second aboard the Vision Wheel M4 ECSTAR Suzuki GSX-R750 but lost a handful of positions recalibrating his aggression and form after the skies opened up. 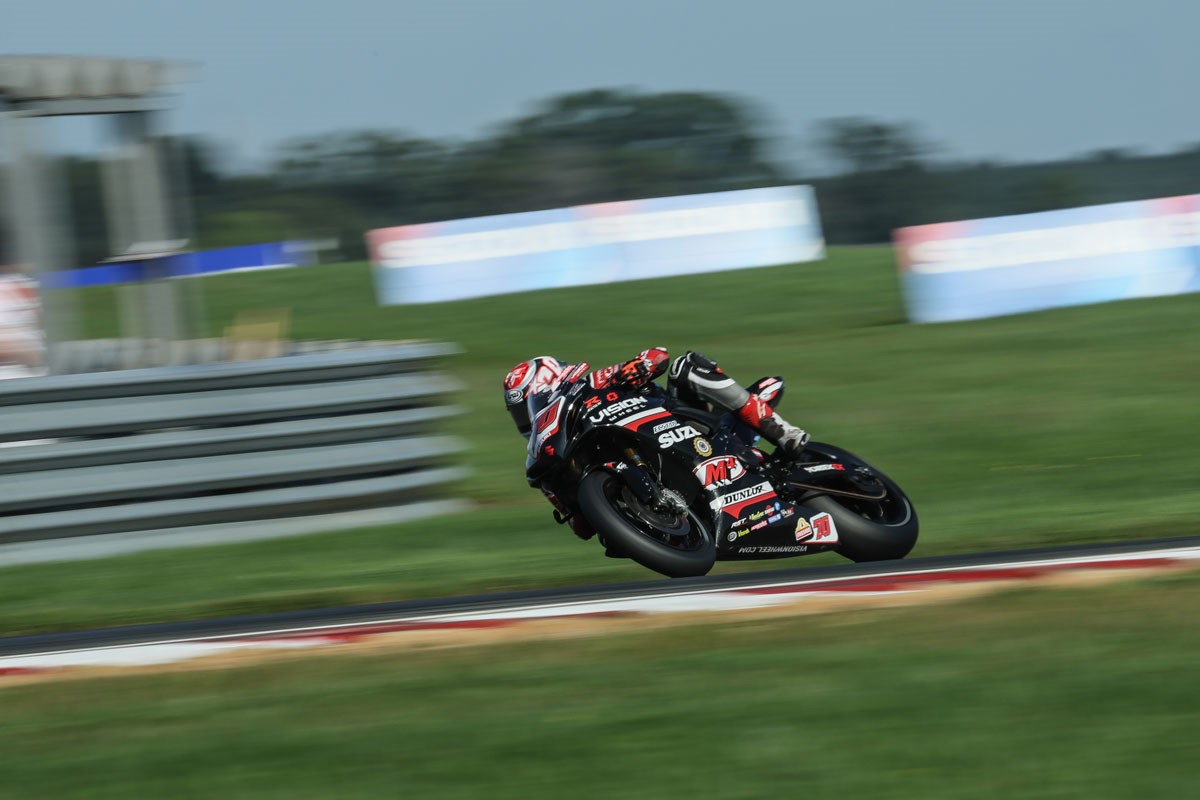 He ultimately earned sixth place, when the race was red flagged and called complete five laps early due to the increasing rainfall.

Scott said, “I’m very thankful for the whole Vision Wheel M4 ECSTAR Suzuki team getting the bike fixed overnight. I felt strong this morning and had some pace, but I’ve been struggling with my hand. Yesterday, when I high sided, my ring finger was injured making it difficult to hold onto the bike in the second and fourth sectors. Other than that, I felt pretty well throughout the race, but didn’t want to push too hard and risk things, so I just tried to keep a fast pace and finish with a decent result.”

Liam Grant (90) continues his progression with a top-ten finish in challenging conditions.

Teammate and fellow class rookie Liam Grant was another of the six Suzuki-mounted riders to break into the top ten, finishing tenth after edging a rival to the strip by a mere 0.032 seconds.

The returning Sam Lochoff was sixth early but came home in 12th. The South African continues to both heal and recover his fitness after being unable to train for much of the season. 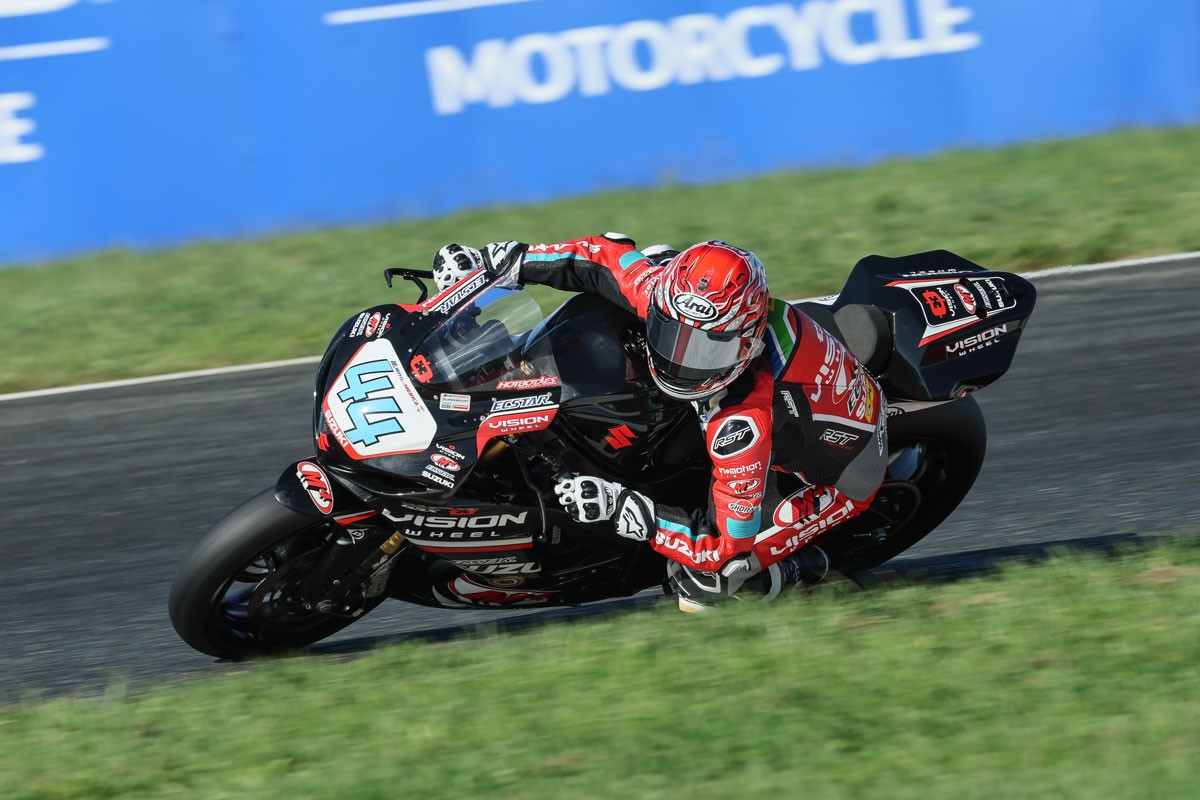 After a promising Race 1, Sam Lochoff (44) looks forward to the last round of the championship at Barber.

Lochoff said, “It was a good race in some ways. I felt more confident out there today than yesterday and it was progress coming back from injury. Then it started to rain. I strongly felt they should have stopped the race to let us get on wet tires. I had nothing to gain being out there taking big risks on dry tires since I wasn’t going to win the race or get on the podium. Still, it was great to be back on the GSX-R and I am looking forward to Barber.”

Team Vision Wheel M4 ECSTAR Suzuki will cap off the ‘22 campaign at the Barber Motorsports Park season finale on September 23-25, in Birmingham, Alabama.