Early promise turned to disappointment in the Supersport class, although Sam Lochoff turned in a gritty performance to finish the race seventh.

His teammate Tyler Scott made a valiant attempt at another class victory on Saturday. Scott qualified third at his home track and rocketed to the holeshot and took the lead of the race. He had pulled a slight gap and showed the power of his Suzuki GSX-R750 in holding off a front straight draft pass attempt on the second lap. Suzuki GSX-R race bikes once again accounted for a significant 40% of the top ten finishes at New Jersey Motorsports Park, continuing Suzuki’s legacy of competitiveness in production road racing. 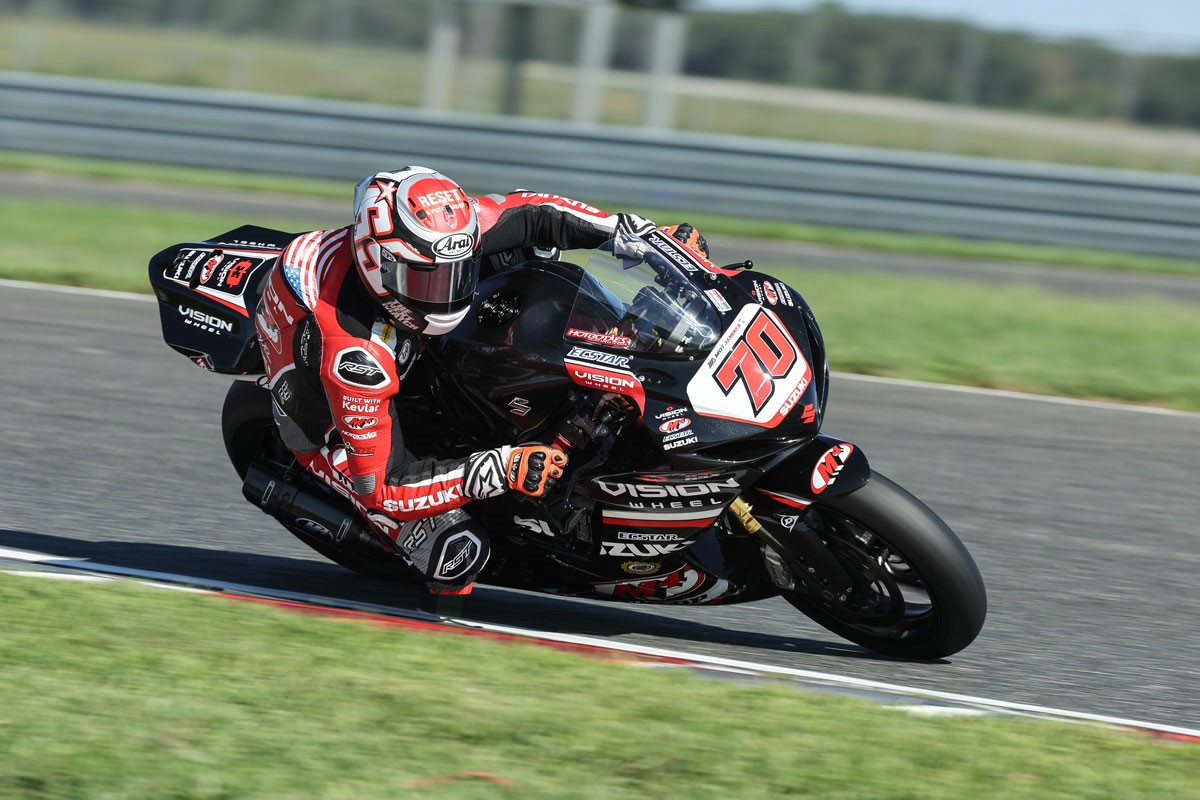 Tyler Scott (70) had a strong qualifying at his home track in New Jersey.

Unfortunately, the fast teen crashed out of the race while leading on the third lap as he attempted to distance himself from his rivals.

“I felt really good on the bike,” said Scott. “I was maintaining the lead and trying to pull away. Between Turns 8 and 9, the tire spun up really hard and pitched me off the high side. It chewed my finger up pretty good so we’re not sure about racing tomorrow. I really want to race, though.”

Sam Lochoff returned to action after missing three rounds due to a broken leg. After qualifying seventh, Lochoff made a great start, leaping to third as the race began. He lost several positions on the second lap, but settled in and fought hard to earn seventh at the 2.25-mile track. 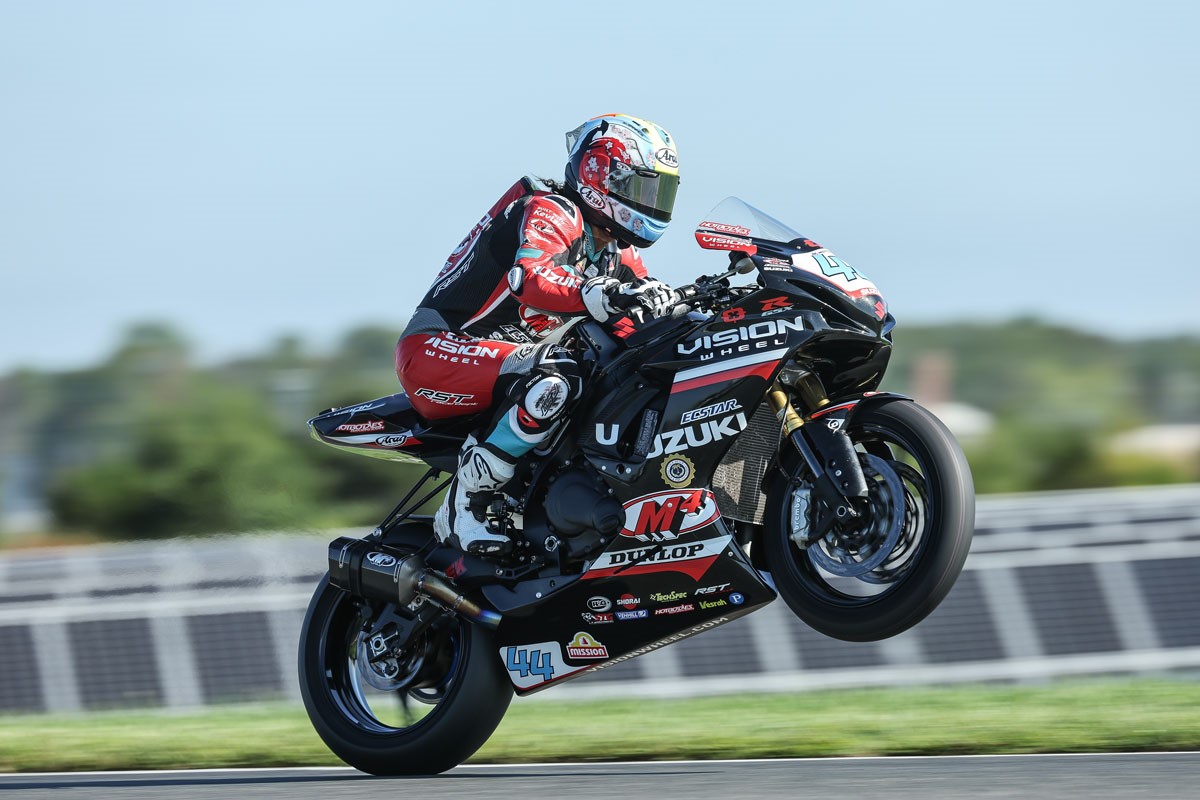 A solid seventh-place finish for Sam Lochoff (44) after missing three rounds due to a broken leg.

“I passed four riders entering into Turn 1 and the race was looking pretty good, but on the second lap I lost the front in Turn 3 and the guys passed me back,” said Lochoff. “In the race, I struggled with traction as well as my fitness.

“I was in a hard cast for six weeks and limited on what I could do to train and I needed to be in top shape today,” added Lochoff. “It felt like the rear tire went off earlier than normal and that made it hard to push the pace later in the race. I was hoping to fight for the podium, of course, so we will regroup tonight and see if we can improve for tomorrow.” 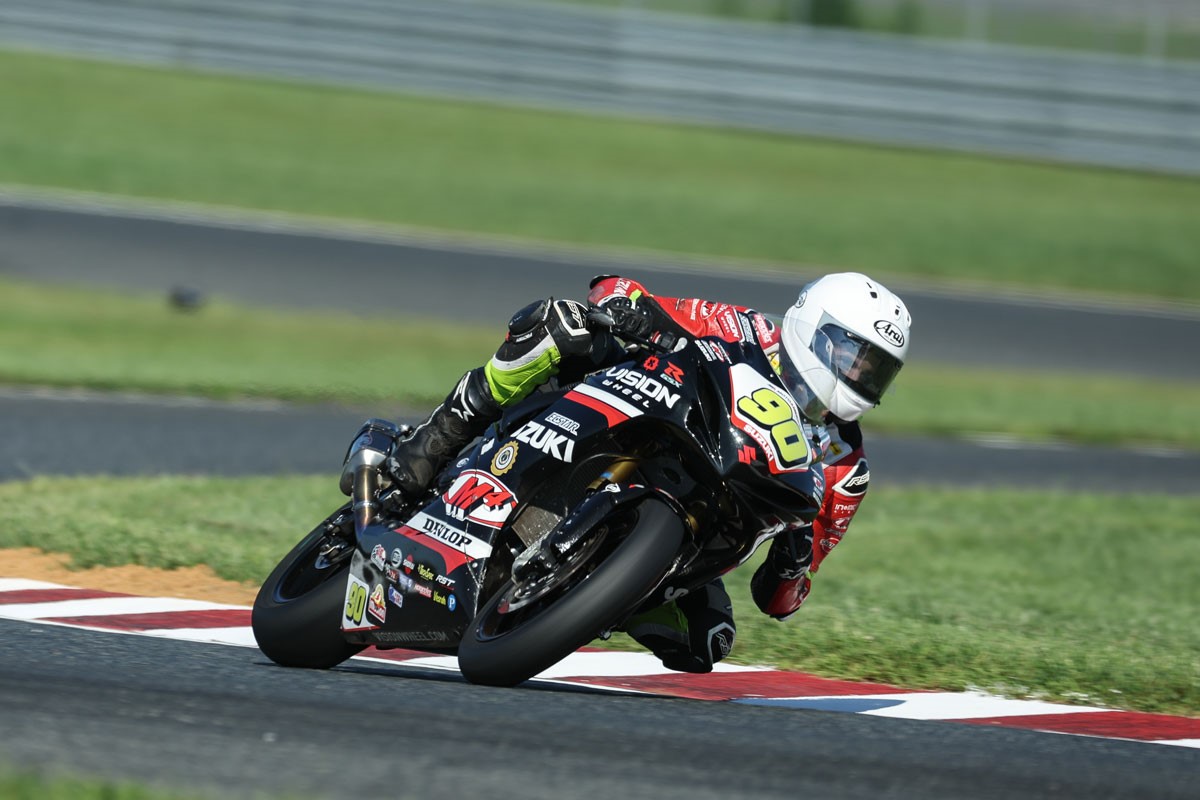 Young racer Liam Grant qualified 13th and improved two positions to earn 11th as he continues to learn in the competitive Supersport class. 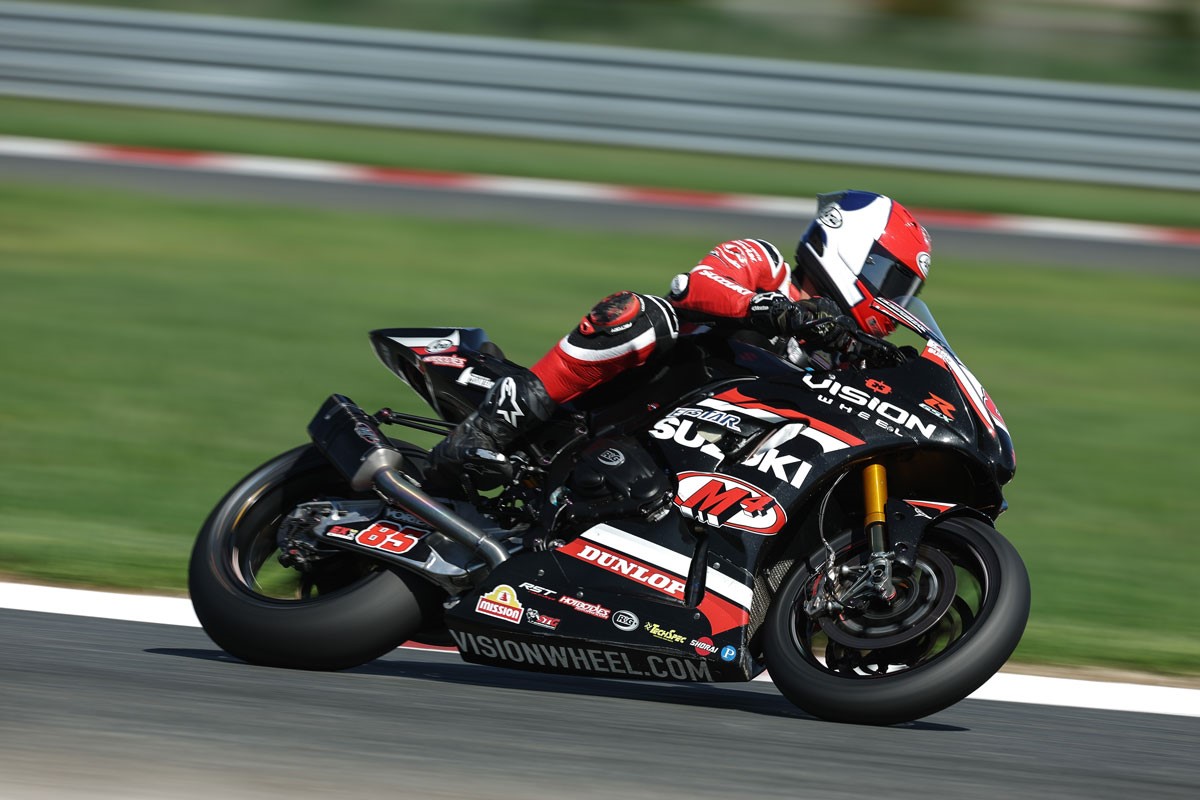 A great top-ten finish for Jake Lewis (85), despite a sub-par restart from a red flag.

Jake Lewis qualified eighth and ran as high as sixth before the red flag. On the restart, which saw the riders revert to their original grid positions, Lewis did not get a good launch and settled into 12th position. The Kentuckian advanced to ninth by the checkered flag on his Suzuki GSX-R1000R, despite his rear wheel speed sensor bracket breaking. That caused his traction control to function erratically during the race.

Richie Escalante had a difficult qualifying and began the race on the 4th row. He had improved three spots to ninth before the race stopped. Escalante got a good start and climbed to seventh on the restart. 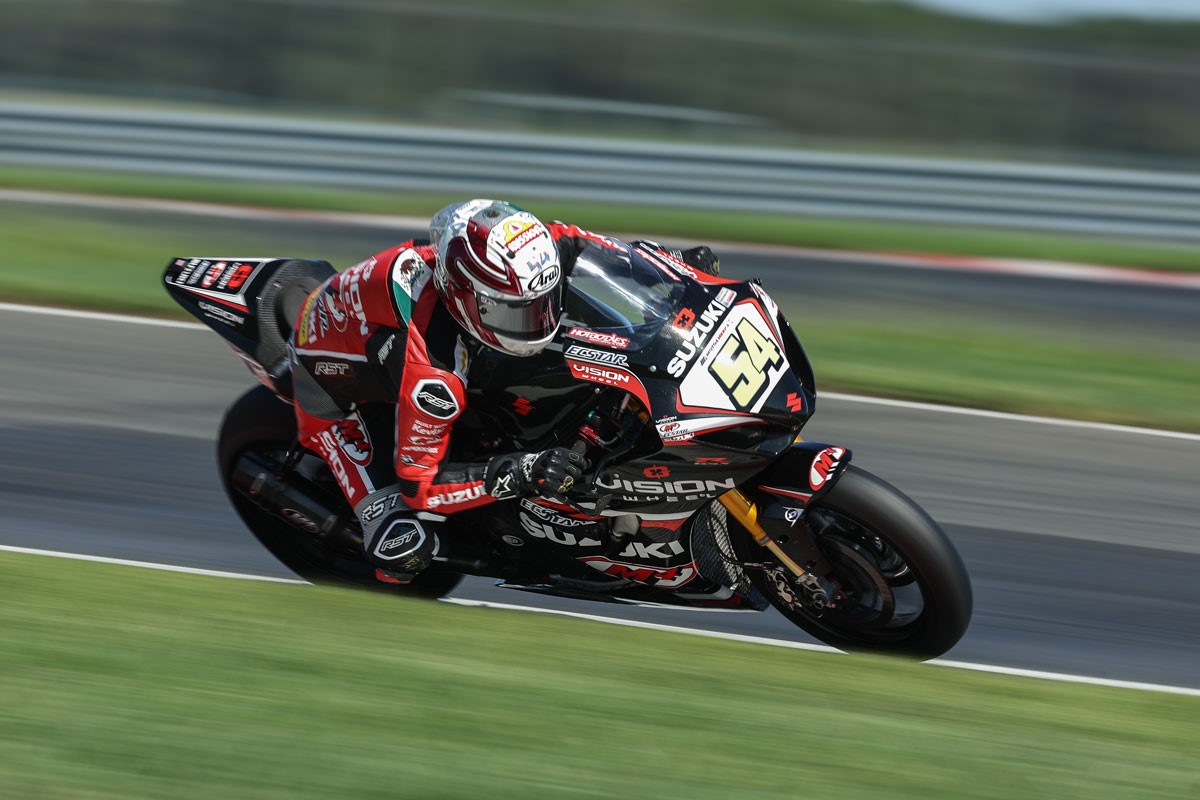 Richie Escalante (54) looking to bounce back from a difficult Race 1.

Eager to regain the momentum he had in the middle of the season, Escalante, still recovering from injury, looked for a trouble-free race. However, the quick Superbike-class rookie had difficulties and dropped out of the race while running in eighth with nine laps to go.

“I am trying hard to recover the feeling from the bike I had before the Brainerd crash and that has been our goal this weekend,” said Escalante. “We’re working on the feeling from the front on corner entry and we made some big changes for the race today. We got a good start and were in a battle for the top six, but then we had a mechanical issue. That’s disappointing but I am happy with continuing to learn every time I get to ride the motorcycle. I feel like we are making progress and I want to finish the weekend strong on Sunday. I am ready for the dry or rain.”