BREA, CA – September 6, 2022 — The Dodge Power Brokers NHRA U.S. Nationals ended in disappointing fashion for the Vance & Hines/Mission Suzuki Pro Stock Motorcycle team after both team riders failed to advance out of the first round of eliminations on Monday at Indianapolis Raceway Park in Indianapolis.

After qualifying their Suzuki Hayabusas in the first and third starting positions, riders Angelle Sampey and Eddie Krawiec each suffered upset first-round losses in final eliminations. Despite the setback, both riders finished the regular season in the top ten positions in points, qualifying them for the five-race Countdown to the Championship playoffs that starts at Maple Grove Raceway in Mohnton, PA, later this month. 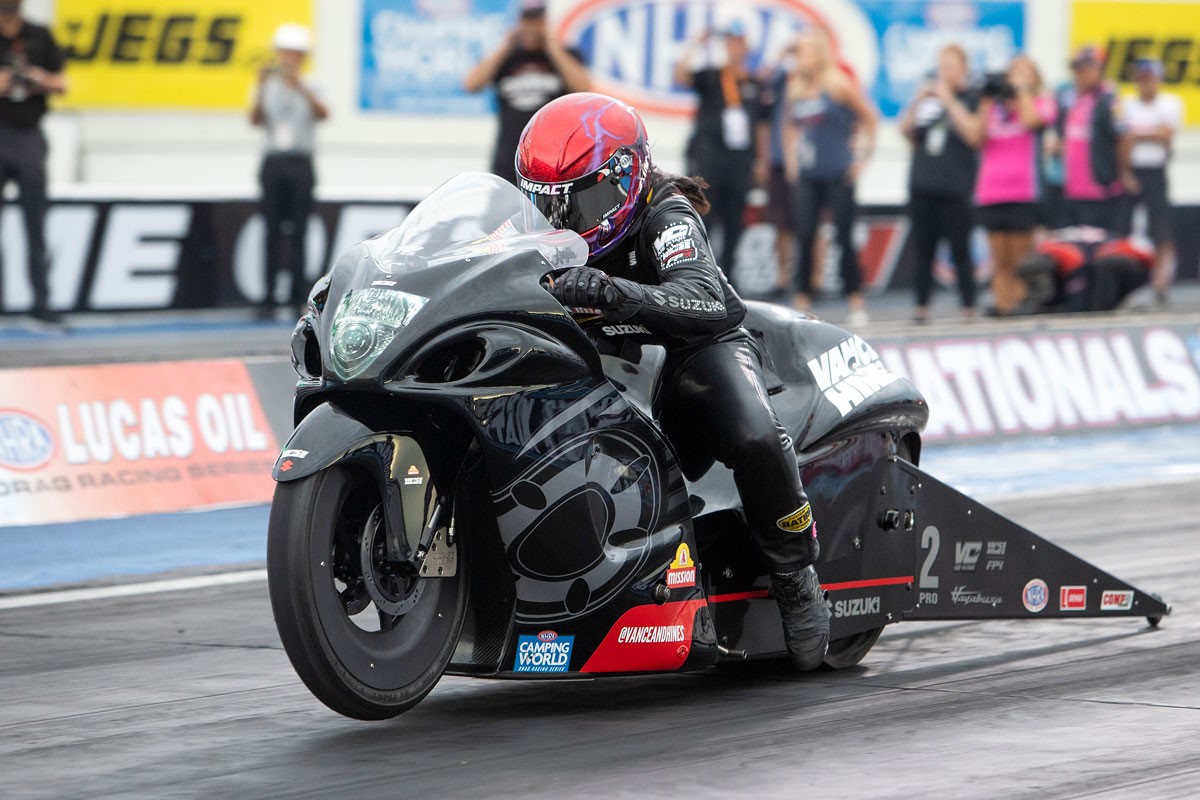 Angelle Sampey (2) captures another number one qualifying aboard her Suzuki Hayabusa.

Sampey entered eliminations in the number one qualifying spot for the 57th time in her career and seventh time at the prestigious U.S. Nationals with a 6.796-second/199.88 mph run. However, a slow starting line reaction time dashed her hopes of a third career win at Indianapolis, losing to Ron Tornow (6.981-seconds/190.27 mph) despite making a quicker and faster 6.919-second/195.31 mph pass.

“I saw the yellows and I meant to throw the clutch out, but my hand just didn’t let go,” she said, admitting to making a costly mental error. “I know it’s an emotional thing. I’m letting the little demon on my shoulder talk me into not believing in myself. I’m the one that keeps beating myself, and now is the time to fix it. I’m disappointed and embarrassed, but not devastated. This is the low point I needed to reach to realize that I need to get my head in a better place and fix it. We have five races left to win this championship, so I’m going full steam ahead into the next race. I’m not looking back and will not allow this to haunt me.”

On the team’s second Suzuki Hayabusa, Eddie Krawiec, who qualified in third position with a 6.826-second/198.79 mph run, was felled by an unfortunate electrical malfunction, losing his round-one matchup to Jianna Evaristo. His 6.966-second/194.07 mph run fell short of her 6.952-second/193.74 mph pass after trouble on the starting line. 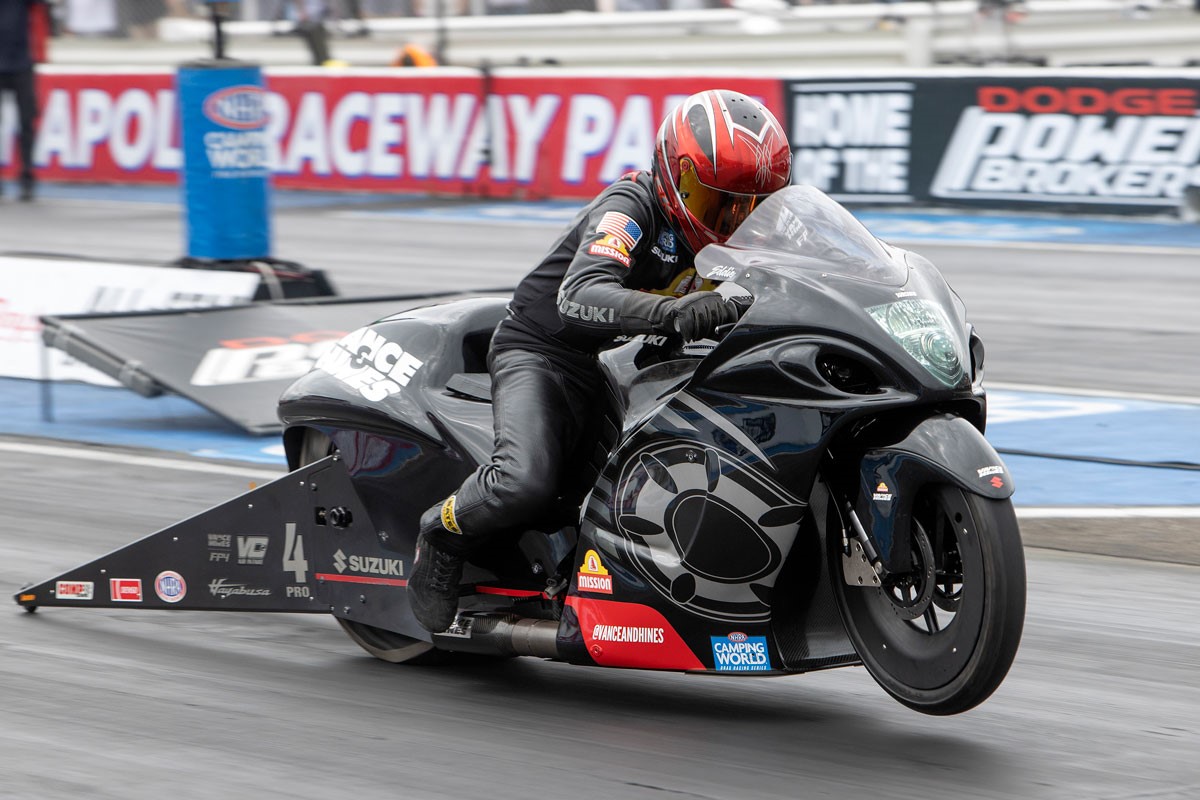 After qualifying third, Eddie Krawiec (4) falls short in the first round and looks to bounce back in Pennsylvania.

“My motorcycle should have ran substantially faster in that round, but I had a parts failure. I had to shut the bike off on the starting line, so there was kind of a scramble there and it just threw me off a little bit,” said Krawiec, who remained upbeat despite the loss.

“I lost some positions in the standings, but I don’t really care where I am going into the Countdown. You have to look forward and not worry about it. Focus on round wins and race wins. That’s what gets you a championship,” he said. “I have a really good record at Maple Grove. It’s a fast track and close to my hometown in New Jersey. I’ve got a lot of fan support there and it should be good.”

The Vance & Hines/Mission Suzuki team’s challenges at Indianapolis weren’t confined to the race track. Crew Chief Andrew Hines tested positive for a coronavirus infection last week and was forced to handle tuning duties via video conference on Friday and Saturday. He was cleared to return to the track on Sunday and tuned trackside on Monday.

“It was definitely more difficult tuning remotely. Not enjoyable, but we got the number one qualifier, so mission accomplished for Suzuki there. We also got Eddie some points with third in qualifying, but unfortunately, we left a lot of points on the table today and that sets us back some in the Countdown,” Hines said. “The electrical problem with Eddie’s bike is one thing, but we just can’t have inconsistencies going through the Countdown. With the way the points are spread out, it’s hard to come back from a one-race deficit in the Countdown so we’ve got to make sure everyone is on their A-game for the rest of the season. We qualified number one at Maple Grove last year with Angelle’s bike and had some good performances there, so we’ll look to capitalize on our data at the next race.”

Following a reset of class points after the 10-round regular season, the Vance & Hines/Mission Suzuki team heads into the Countdown to the Championship with Sampey in fourth position with 2,060 points and Krawiec in fifth position with 2,050 points.

The Vance & Hines/Mission Suzuki team will be back in action September 15-18 for the first round of the Countdown to the Championship at the Pep Boys NHRA Nationals at Maple Grove Raceway in Mohnton, PA. The 2022 Pro Stock Motorcycle season concludes November 10-13 at the Auto Club NHRA Finals at Auto Club Raceway in Pomona, CA.