BREA, Calif., August 29, 2022 — On a tough race weekend Suzuki riders put in strong charges throughout the four motos that made up round 11 of the 2022 AMA Pro Motocross Series. The deep ruts of Ironman Raceway in Crawfordsville, Indiana set the stage for BarX/Chaparral Suzuki's Preston Kilroy to match his season-best overall result. Twisted Tea Suzuki Presented by Progressive Insurance's Marshal Weltin finished just outside the top ten aboard his RM-Z450. Kilroy's BarX/Chaparral Suzuki teammates Carson Mumford, Derek Drake, and Dilan Schwartz pulled in more championship points at the penultimate round of the 2022 season with their Suzuki RM-Z250s. And the Twisted Tea Suzuki team enlisted another late-season recruit; Justin Rodbell earning an RM-Z450 ride for the final two rounds of the year. 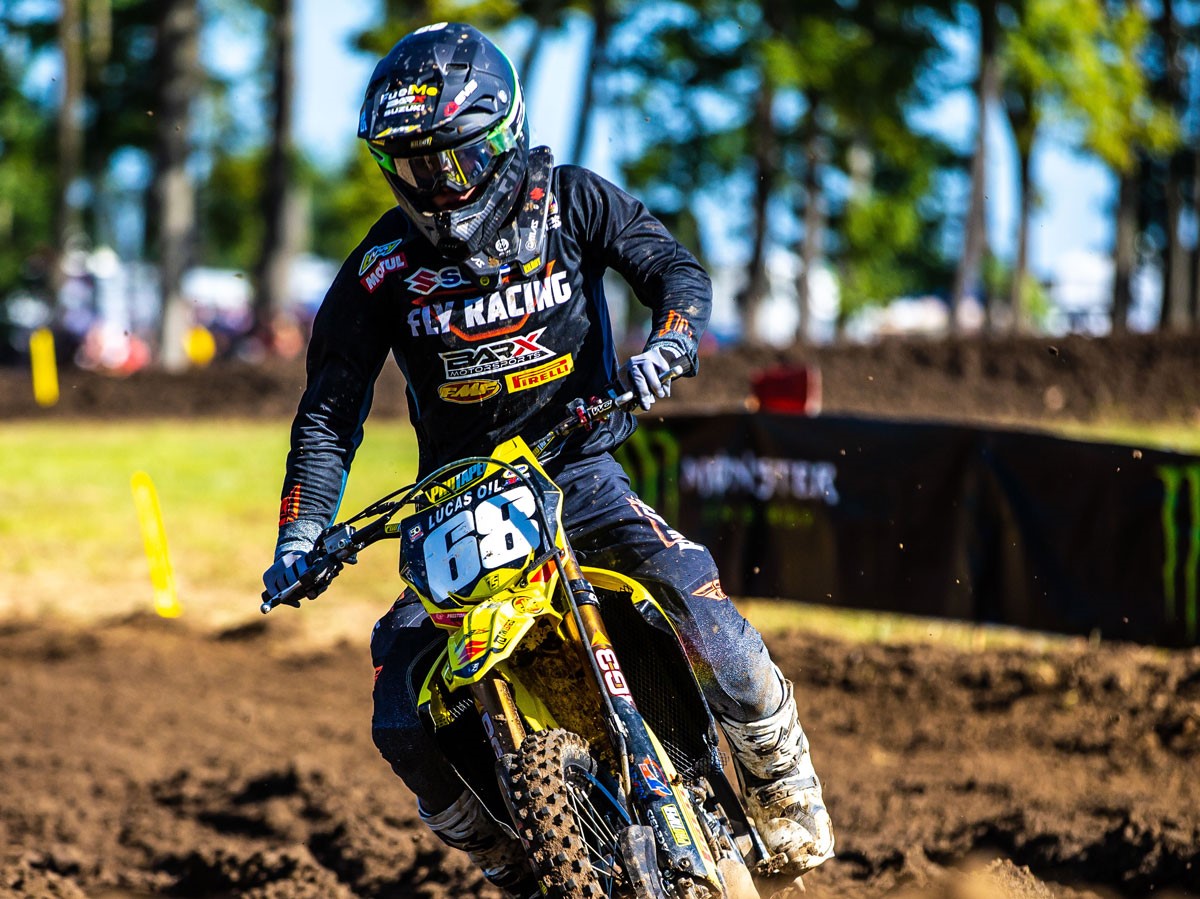 "Ironman was a step in the right direction," said Kilroy. "I got off the gate strong in both motos but had a tip over in the first moto. I went 18-13 for 13th overall. I'm feeling great on the bike lately and we're excited to finish out the season at Pala!" 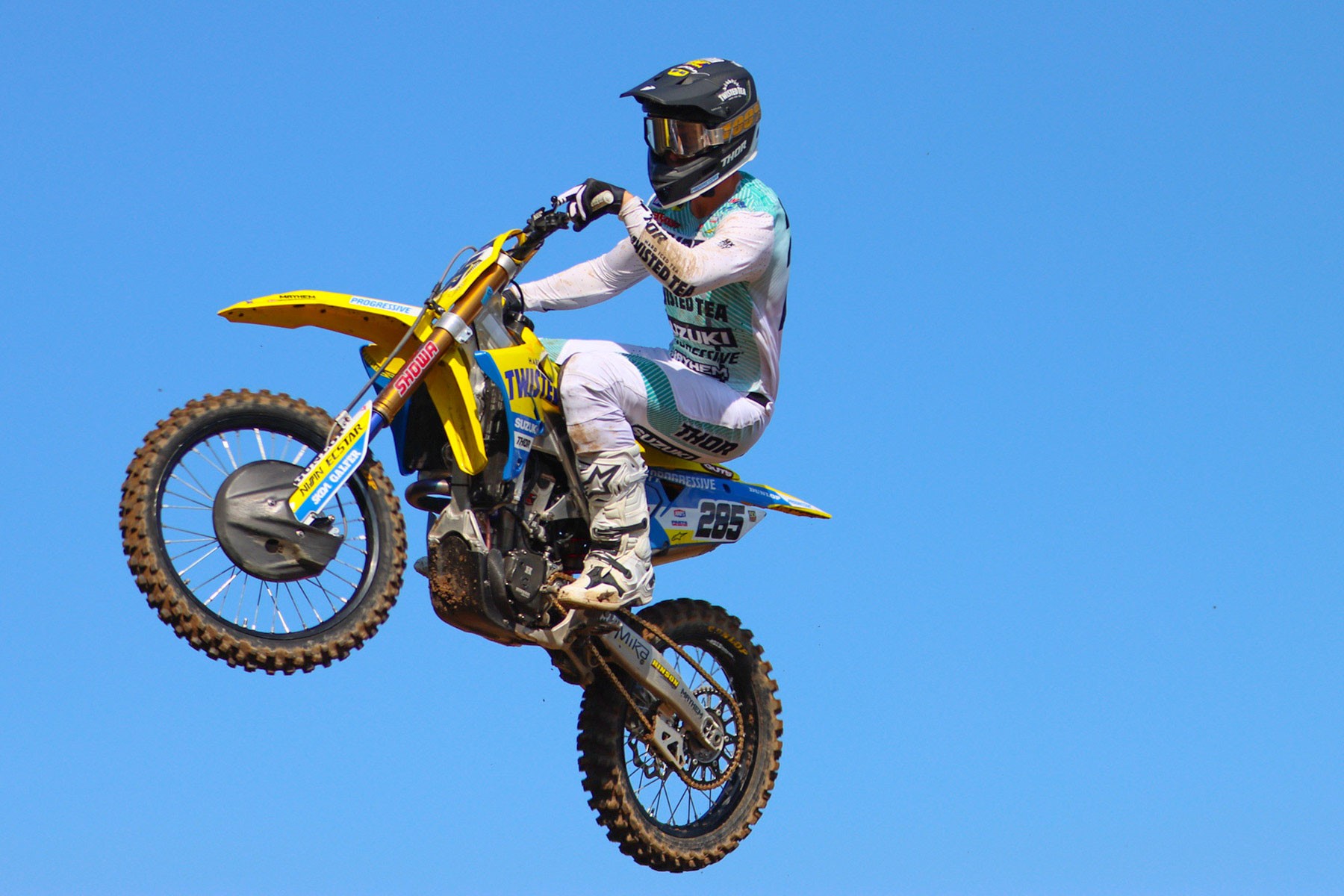 Twisted Tea Suzuki's Marshal Weltin spent his race day at the edge of top ten moto and overall results. Weltin brought home his fifth top fifteen overall result and demonstrated the speed to be ready to finish the season with a strong ride at the final round.

"I was unable to ride all week because of my crash at Budds Creek." Weltin continued, "I didn't know where I was going to stand this weekend. In Moto 1 I struggled. I had some pain; I'm still pretty locked up from the crash. I toughed it out for Moto 2 and fortunately found some better lines. I went 15-11 on the day, so overall I'm pretty happy with how everything turned out. I'm ready to move on to Pala and keep progressing. I'm really happy with the bike right now." 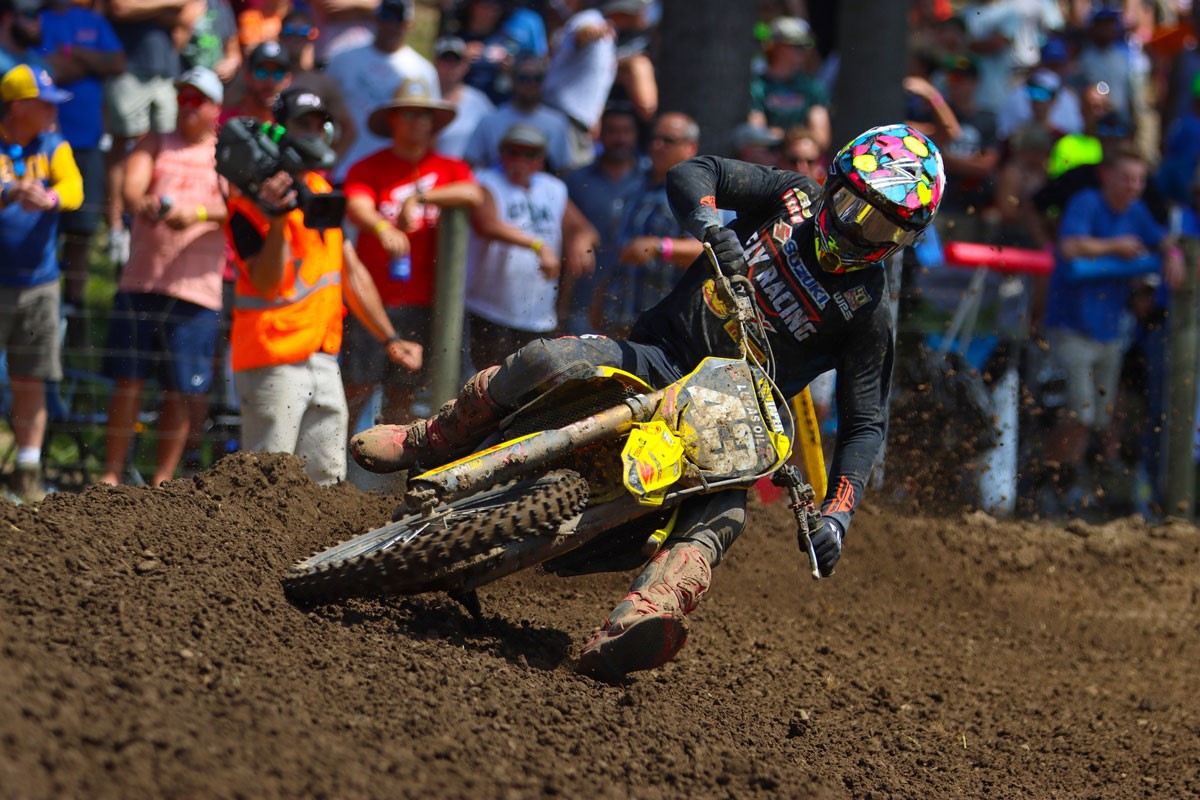 Carson Mumford (43) showed brilliant speed and the ability to pass on the rutted Ironman Raceway track.

Carson Mumford was able to make passes and take nearly any line on his BarX/Chaparral Suzuki RM-Z250. Unfortunately, an issue in the second moto didn't allow him to match the impressive charge through the pack that Mumford delivered in the first moto.

"It was a bummer weekend," said Mumford after earning a top ten moto score at the previous round. "I fought hard in Moto 1. I came from behind, but only made it up to 15th place." 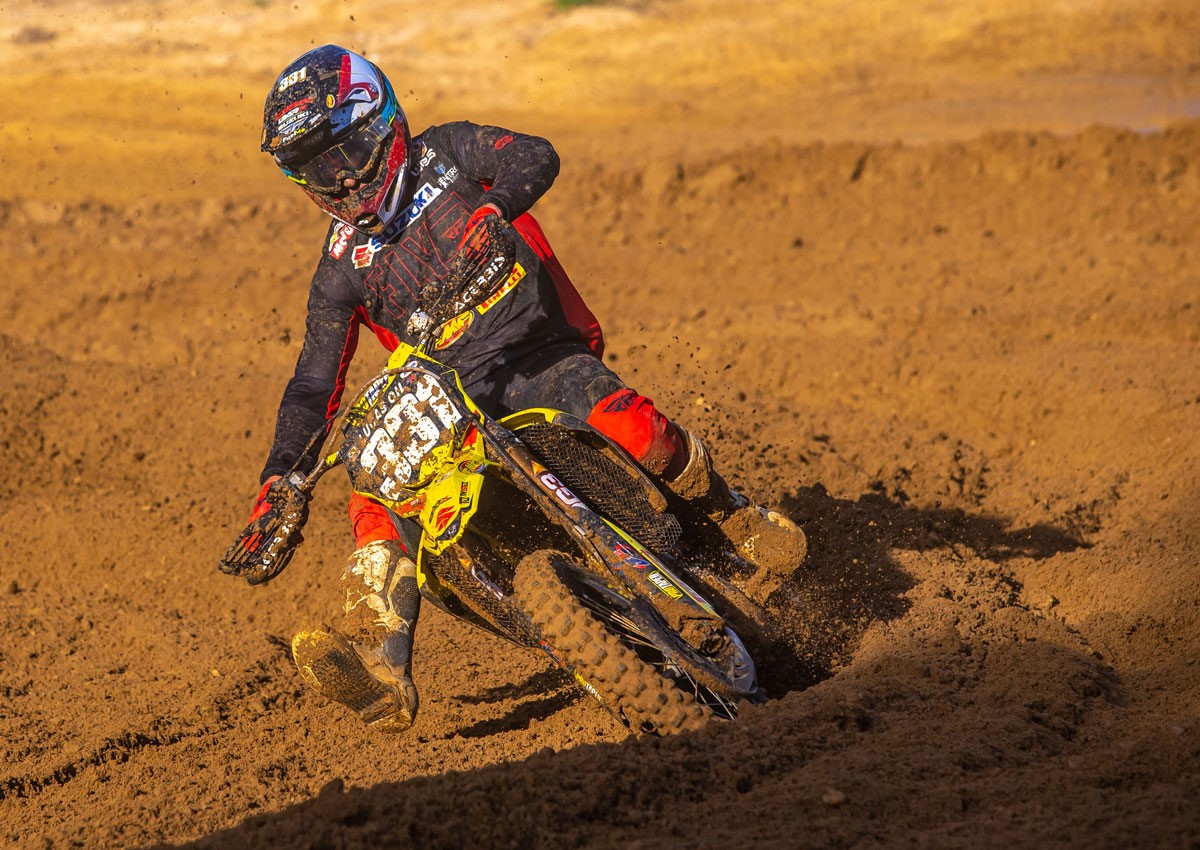 Derek Drake (331) was in the hunt for championship points through much of the day.

Derek Drake was smooth and fast aboard his BarX/Chaparral Suzuki RM-Z250. Although a crash in Moto 2 hurt his overall result, his first moto ride delivered championship points amid the crowded pack of the world's best motocross racers.

"In the first moto I had some good speed in the beginning, but I ran out of steam," reported Drake. "The track was really tough and definitely challenging. In the second moto, I crashed with other riders in the third turn and unfortunately, couldn't pick the pace back up." 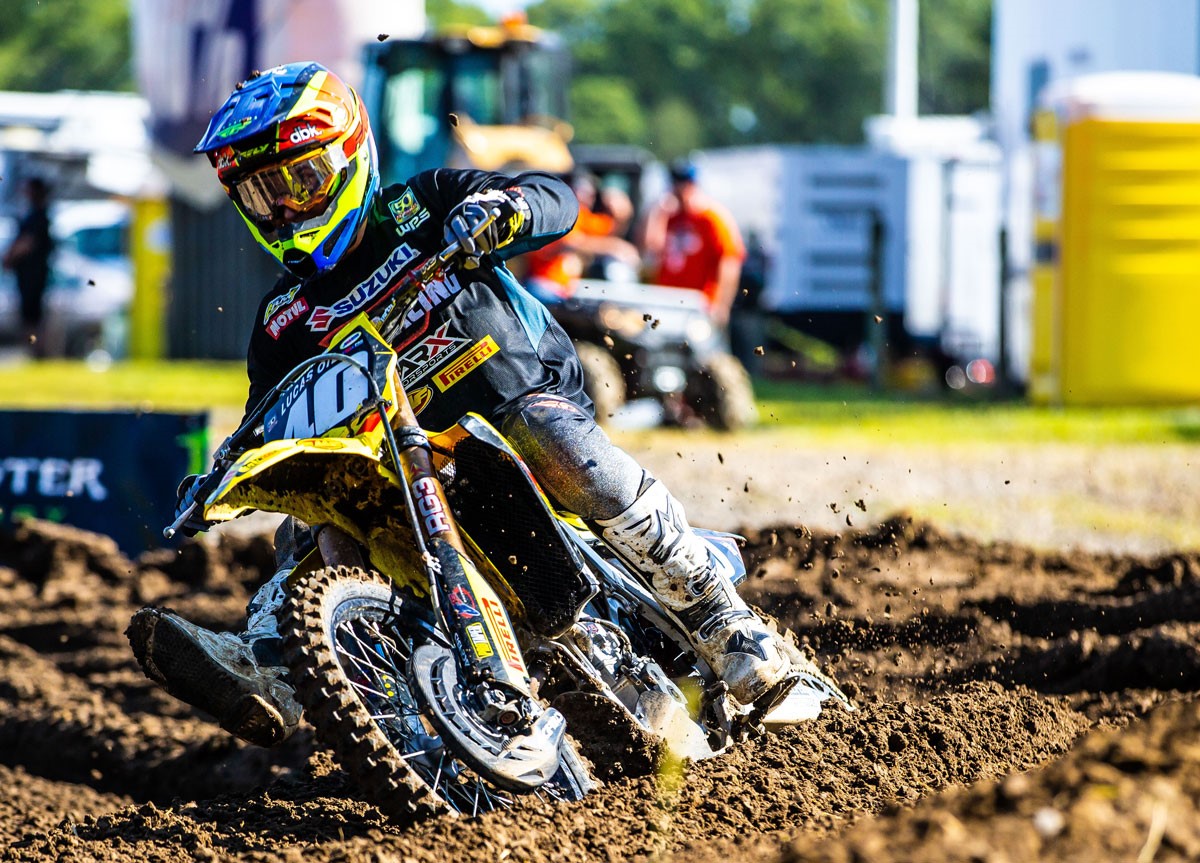 Dilan Schwartz (40) continued his strong showing of speed after his late return to the 2022 outdoor motocross series.

BarX/Chaparral Suzuki's Dilan Schwartz nabbed a top ten start in the day’s first moto. In the second moto, Schwartz had a setback, but put his head down and drove forward to get his RM-Z250 back into a points-paying position.

"In the first moto I had a decent start but ran into the back of someone on the first lap and went to last," said Schwartz. "I came back up to about 18th then cross-rutted on a landing and crashed pretty hard and was unable to finish. I made it out for Moto 2, but just didn't feel great out there so the result wasn't quite as good." 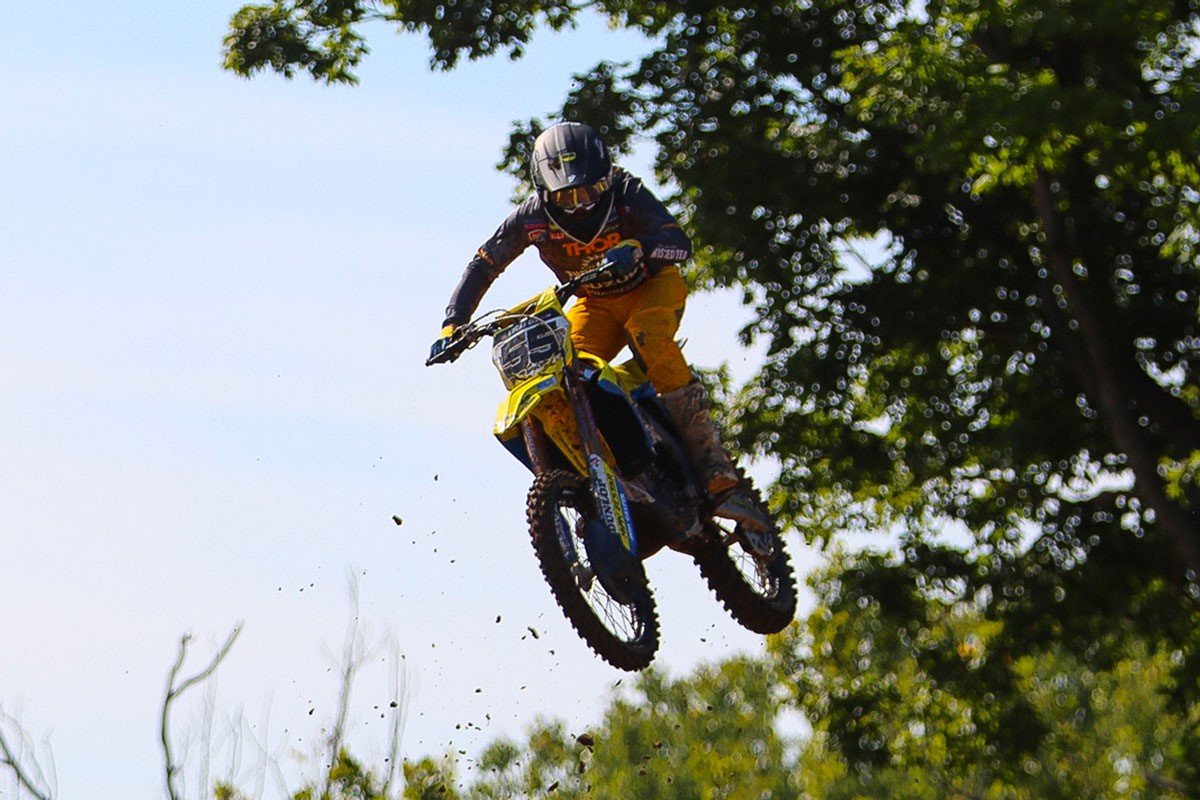 New recruit, Justin Rodbell (55) adapted quickly to the Suzuki RM-Z450. He scrapped for points in Moto 1 and showed even more speed in the second moto to finish in the points in both races on his first outing aboard the Twisted Tea Suzuki race bike.

"I qualified 19th and then I ended up going 20-17 for 19th," said Rodbell. "This was my third day on the bike and with the team. It's quite a bit to take in, in three days. But it was a good day, I had a lot of fun. [Travis] Soules is a great mechanic. Having him help me is huge. It's really cool to have this opportunity. I'm super pumped; we're going keep working and try to finish better and have fun; man, it's super fun."

"I'm glad to have two bikes back on the track this weekend," stated Dustin Pipes, Team Manager for the Twisted Tea/H.E.P. Motorsports/Suzuki Presented by Progressive Insurance team. "Marshal rode well and is knocking back on the door of top 10. He's really close and he has a good chance next week of getting back in there. We welcomed Justin Rodbell to the team beginning this weekend. With only two test days on the bike, he wasn't too familiar, but we tested different parts all day and found a good direction in the last moto."

With one round remaining, the motocross world focuses back on the venue that also hosted the opening round, Fox Raceway in Pala, California. The teams are putting their final push into the successful season that's seen impressive returns to racing and new athletes instantly adapting to the confidence-inspiring handling and power of the Suzuki RM-Z motocross bikes.

For more team updates and the latest news and insights, visit SuzukiCycles.com/Racing/Motocross and HEPMotorsports.com.