BREA, Calif., August 1, 2022 — Suzuki Motor USA and Team Hammer added another top-five result to close out a MotoAmerica weekend at Brainerd International Raceway in a race filled with battles for the podium positions.

After scoring double top-five finishes in the previous two MotoAmerica Supersport races, Vision Wheel M4 ECSTAR Suzuki’s Tyler Scott and Cory Ventura showed the pace early to step that up to a double podium aboard their next-generation GSX-R750s.

However, that’s not how the race would play out. 16-year-old Scott charged hard early to close down on the leader and escape from the remainder of the pack behind him. Unfortunately, the rookie’s substantially improved pace went unrewarded when he crashed out of second while navigating lap five. 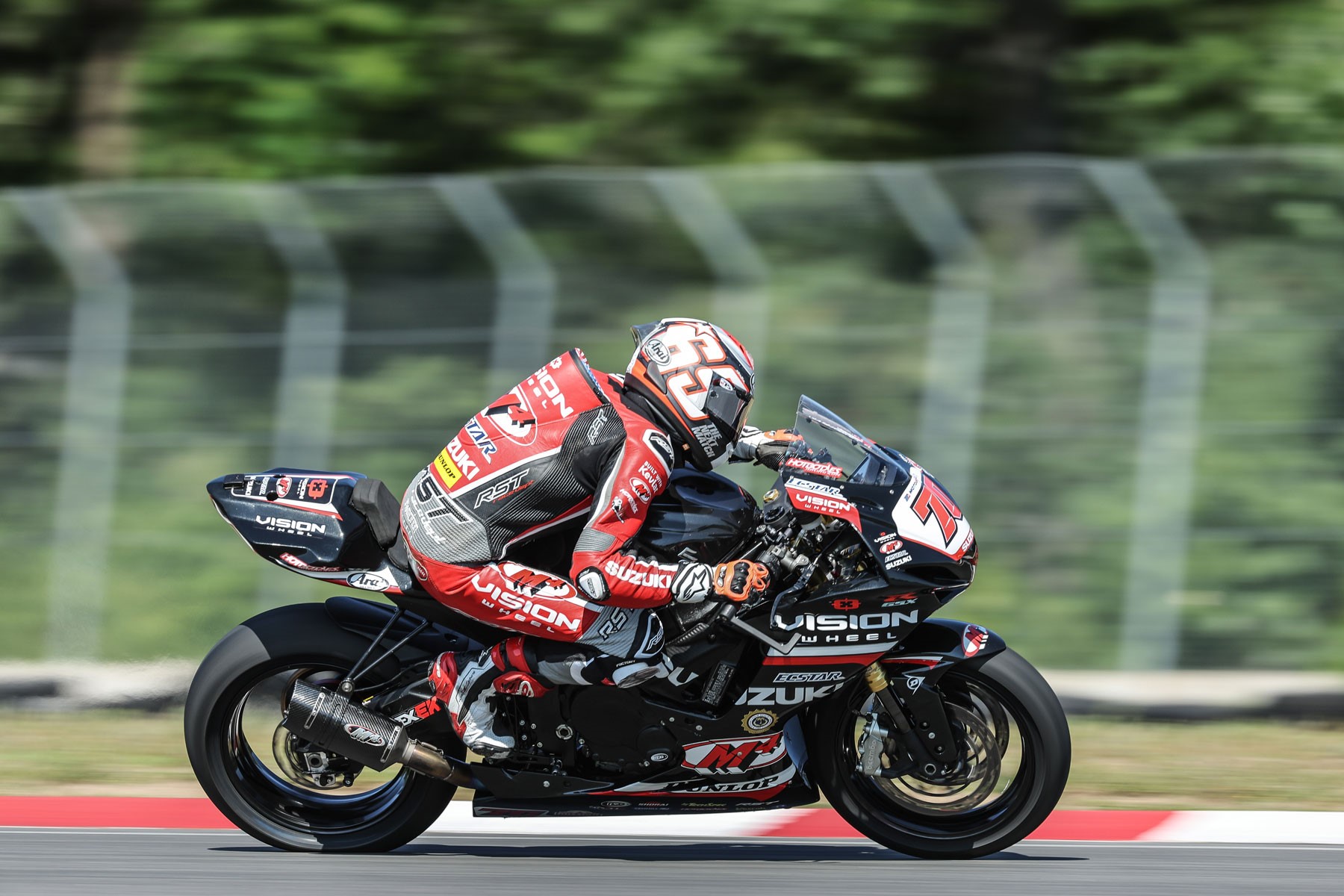 Even though his Race 2 ended early, Tyler Scott (70) is looking forward to the next round in Pittsburgh.

Scott explained, “I was going into the carousel and missed a downshift and then I just ran out of room. We learned a lot with the setup of the bike this weekend, and today’s race was turning out better than Saturday’s race. I am okay and looking forward to going to Pittsburgh for the next round.”

Scott’s misfortune elevated Ventura’s fight for a podium position into one for a runner-up result, a battle that would rage to the checkered flag. As many as five riders had a shot at second deep into the contest before three riders, including Cory Ventura, shook free. 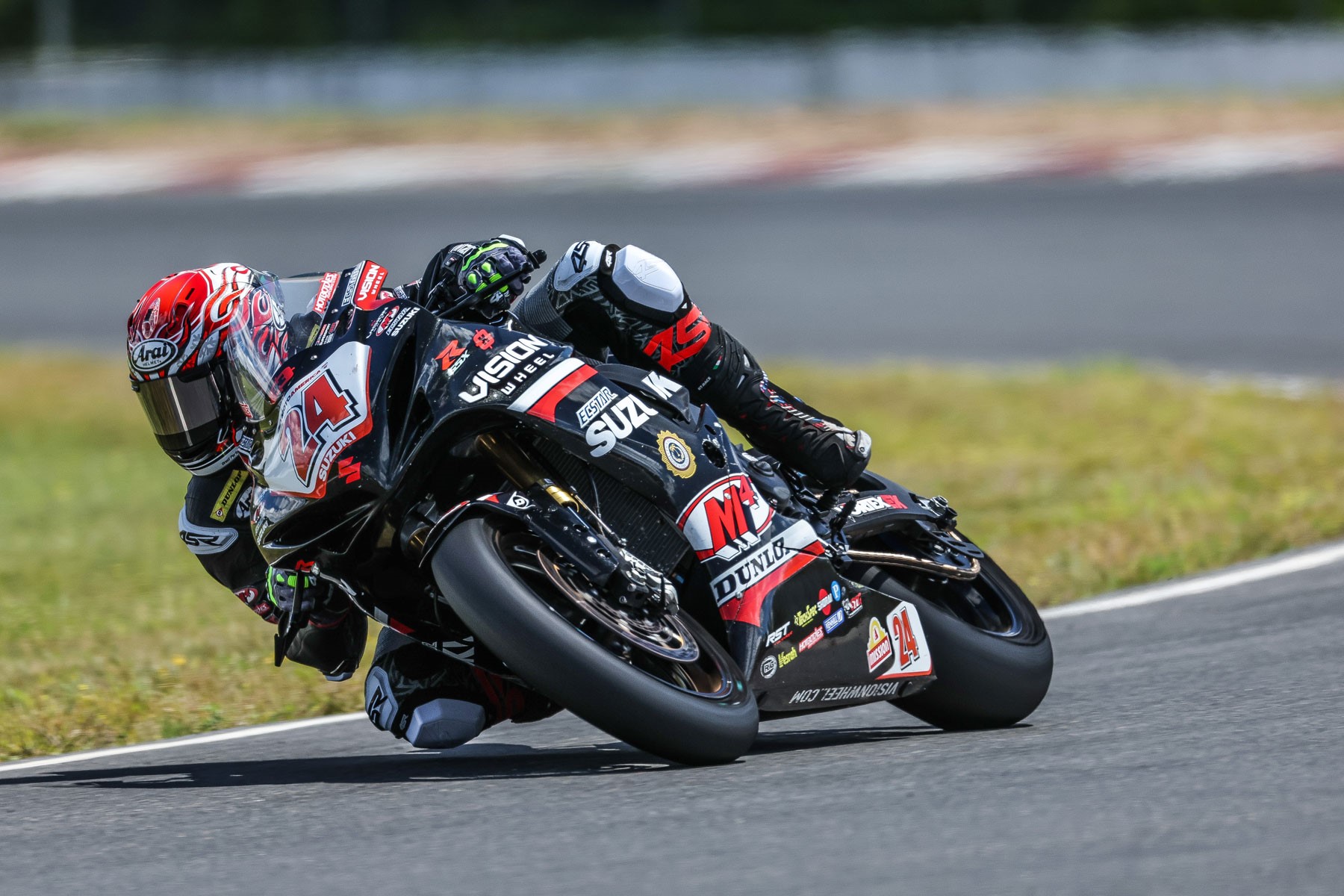 Cory Ventura (24) took advantage of the opportunity this weekend to card back-to-back top-five finishes at Brainerd.

With sharply contrasting strengths and weaknesses, there were many overtaking maneuvers among the podium contenders with Ventura spending a significant portion of the race claiming, holding, and reclaiming second. However, the thrilling up-and-down dogfight ended down for Ventura, as he was passed late on the final lap, displacing him from the final spot on the box in the process.

The fourth-place finish was a third consecutive top-five for Ventura in his short stint with Vision Wheel M4 ECSTAR Suzuki, replacing the injured Sam Lochoff. He said, “Personally, the race meant a lot to me. We had been making steady progress up until my crash on Saturday, and I was confident I could ride near the front because I had great momentum with the Suzuki GSX-R750.”

“The first laps in the race today felt really good and we made some good passes and battled for position. I knew I had a strong bike underneath me. I started to struggle a tiny bit in the end, but I was trying to ride my own race. Finishing fourth was a big step forward.” 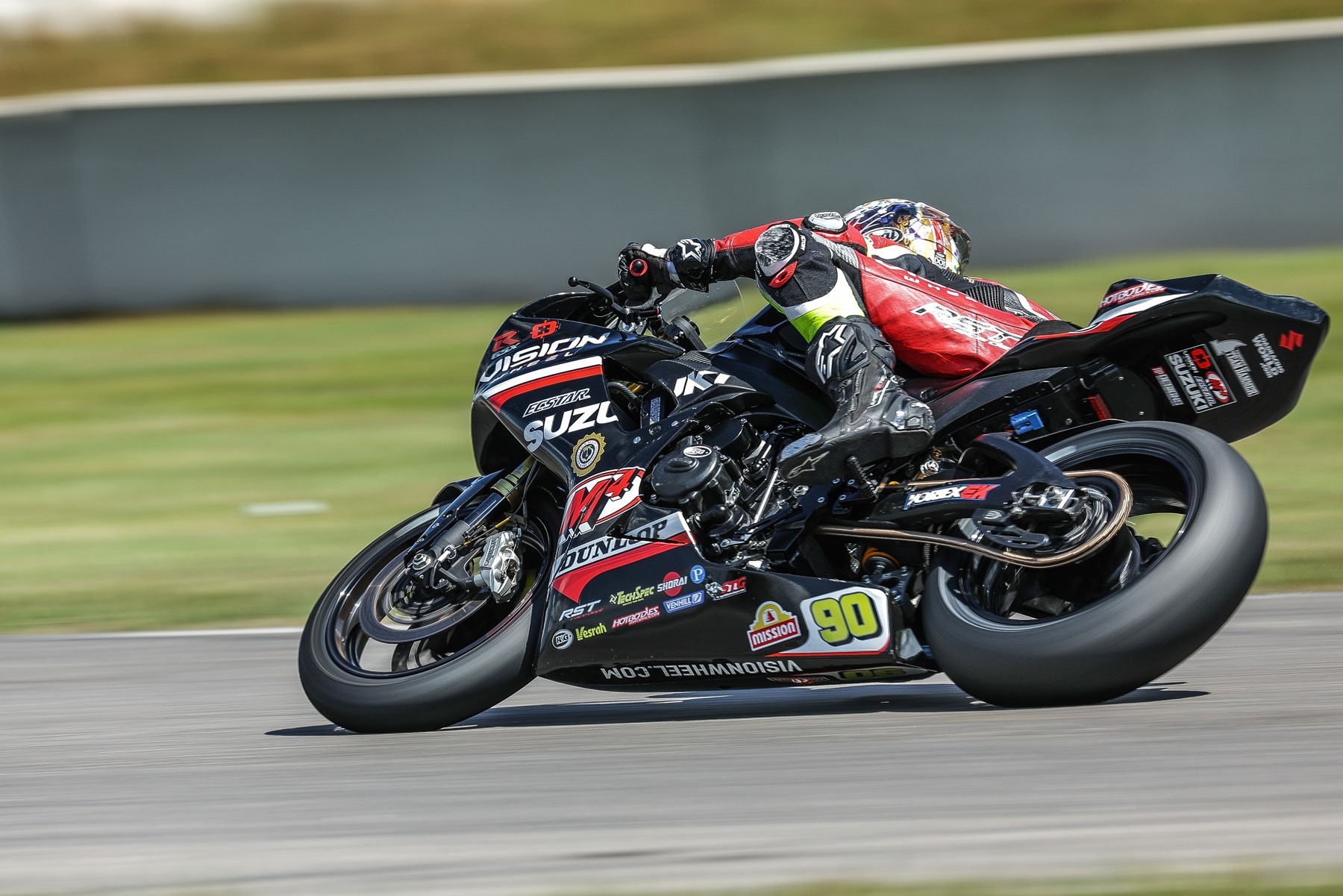 A pair of top ten results for Liam Grant (90) at Brainerd and he is looking to build on the momentum for Pittsburgh.

In what has been a solid rookie season in the Supersport class, Liam Grant earned tenth on Sunday as the Colorado resident followed up his Saturday race with an identical result.

MotoAmerica Superbike rookie Richie Escalante registered another DNS due to his ankle injury in his Saturday qualifying crash. As a result, Jake Lewis was again the sole representative for Vision Wheel M4 ECSTAR Suzuki in Sunday’s premier-class contest.

With two top ten finishes for the weekend, Jake Lewis (85) is looking to get back to racing shape in the next round.

The Kentuckian raced forward from his Row 4 starting position and even made a push for the fight for fifth aboard the team’s GSX-R1000R at mid-distance. However, Lewis, who is still on the mend and working his way back into race shape, ultimately, was forced to relent and accept a seventh-place result.

“This hasn’t been the easiest of weekends for me, but it’s nice to be back,” Lewis said. “Missing Laguna and watching from the couch was no fun at all. We’re continuing to make progress, and it’s fun to race in front of all these fans.”

Team Hammer will next travel to Pittsburgh International Race Complex in Wampum, Pennsylvania, on August 19-21, for the next round of the 2022 MotoAmerica AMA/FIM North American Road Racing championship season.