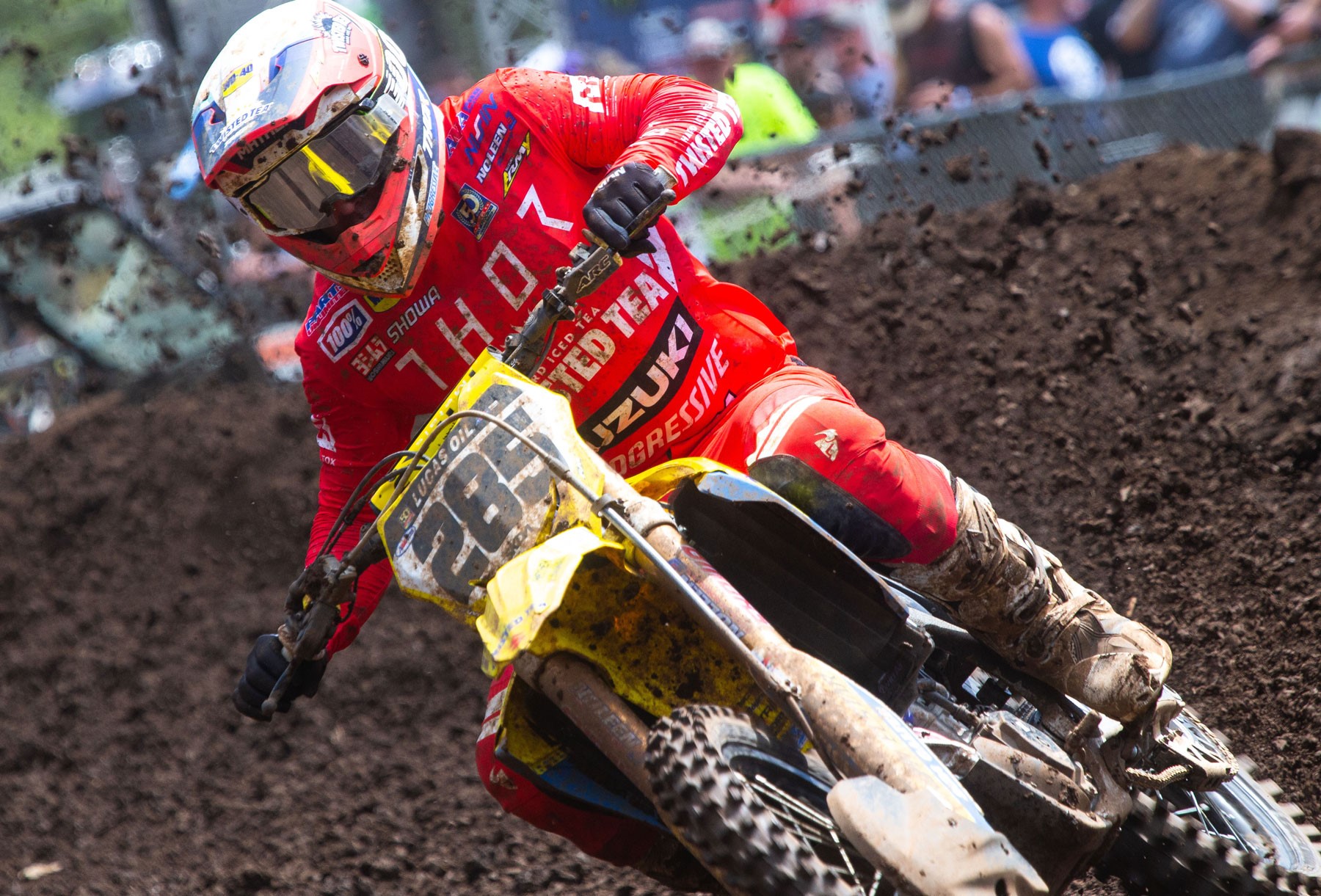 Marshal Weltin (285) followed up an incredible charge in Moto 1 with aggressive passes early in Moto 2 at Washougal to bring home solid points result.

Marshal Weltin started both motos just inside the top twenty and moved forward from there. In Moto 1, his charge forward aboard his Suzuki RM-Z450 put him in a great position for a strong day. He rose faster through the pack in the second moto. The event advanced Weltin in the championship standings and highlighted Weltin's improvement after joining the Twisted Tea Suzuki team and getting aboard the RM-Z mid-way into the season.

"I've been putting in some work in California. I feel those tracks are pretty relatable to Washougal, with their makeup and how they change throughout a race day. I was feeling strong coming into this weekend," said Weltin."The bike's been working great. I got off to pretty average starts then put in the work and went 12-11 on the day for 11th overall. It was a really cool weekend having Adam Enticknap with us to help analyze the riding and put my focus into the track and what I was doing. I think it elevated our game mentally for the weekend, he brought a lot of energy. Just overall it was a really fun day." 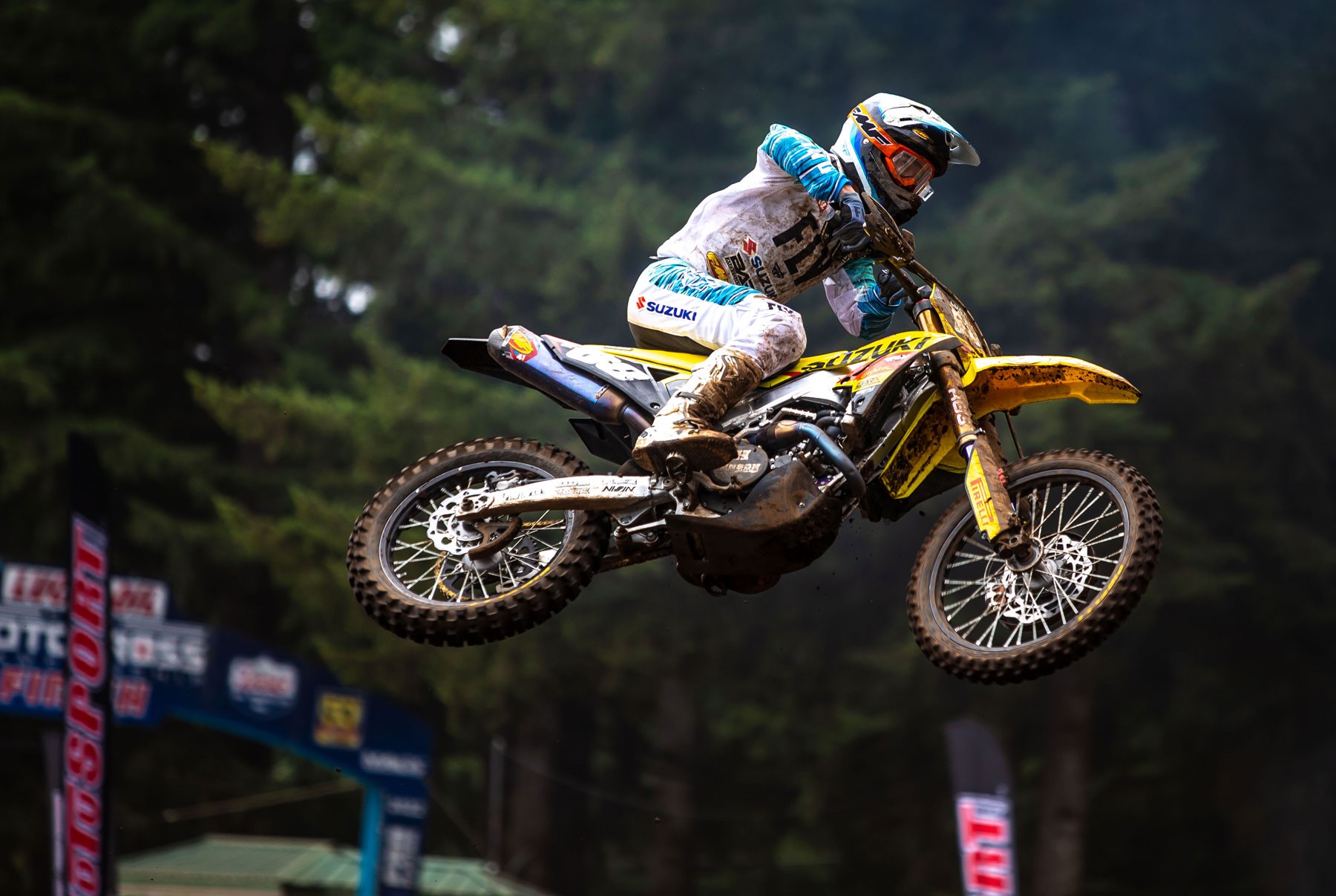 Preston Kilroy's (68) season-best finish moved him and his Suzuki RM-Z250 up two spots in the title chase standings.

Preston Kilroy delivered again with back-to-back milestone results. The RM-Z250 rider set season-best overall and moto finishes, just as he had at the previous round.

"Washougal was another step in the right direction," declared Kilroy. "My starts weren’t the greatest and that made things pretty difficult on me in Moto 1. I got stuck behind riders and the track was hard to pass on. In Moto 2 I was able to make some quick passes and get a gap and was able to finish in eleventh." 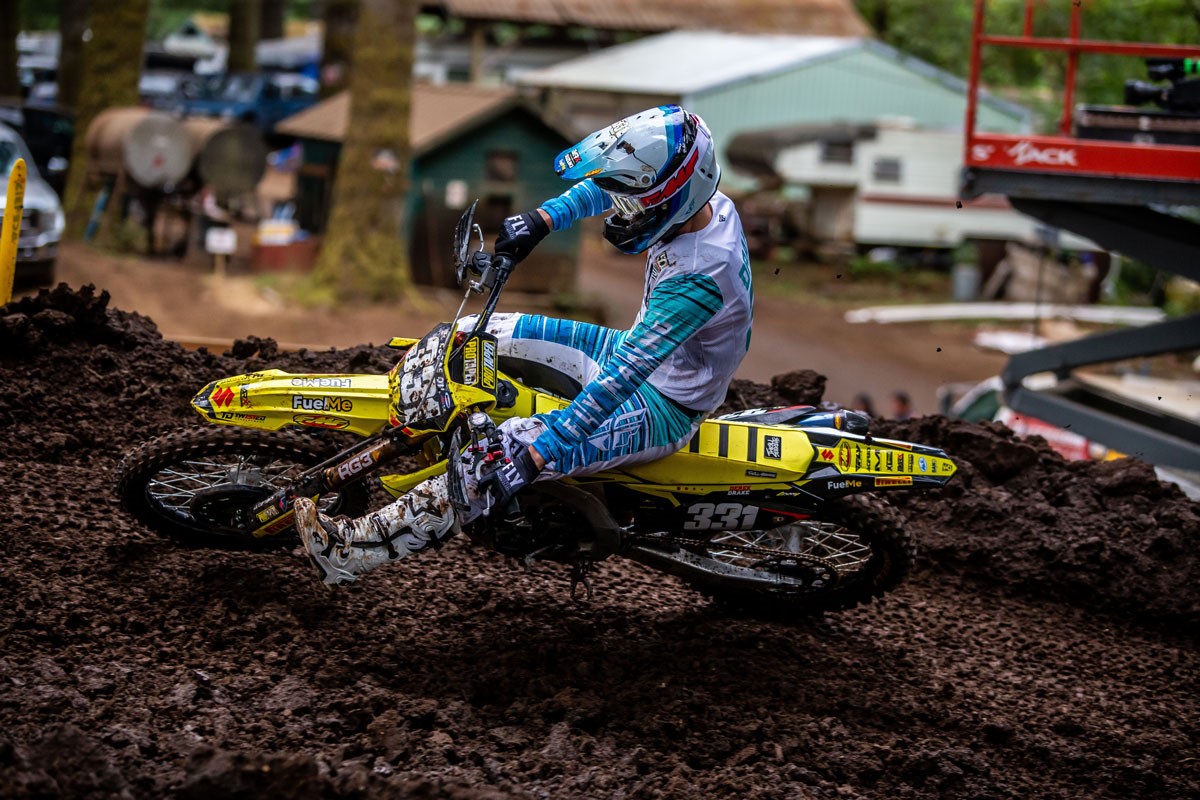 Derek Drake (331) managed traction on the slick Washington track to finish with his best result of the 2022 motocross season.

Derek Drake and his BarX/Chaparral Suzuki RM-Z250 had their work cut out for them in the second moto; the opening lap of Moto 2 had them well outside the top twenty. Drake put the hammer down and got around riders on a track known for being difficult for passing.

"Washougal was good." Drake then told, "I got challenging starts in both motos. That made it hard coming from the back on a one-line track. But I saw big improvements with my second moto fitness, so we are getting there!" 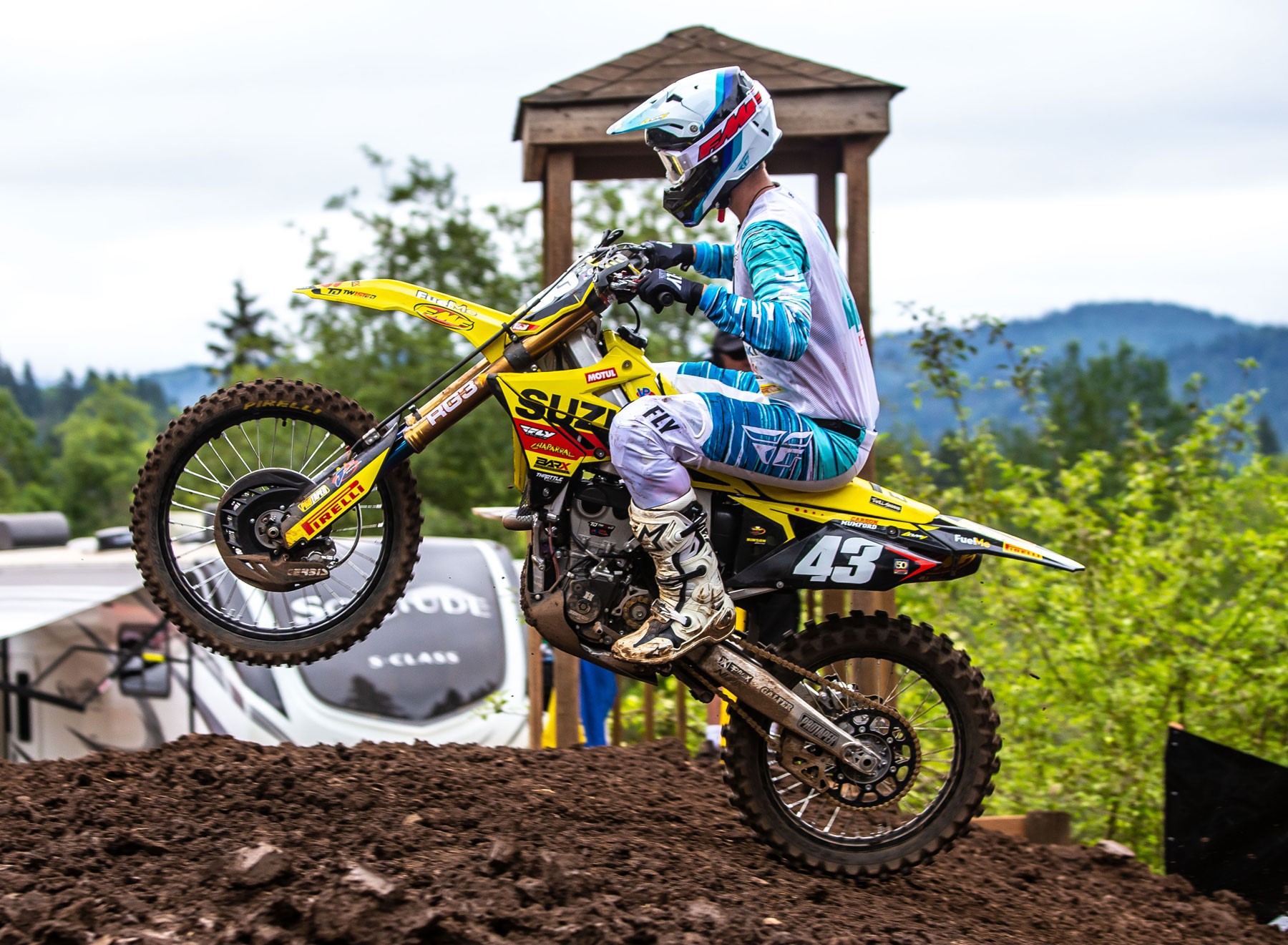 Carson Mumford (43) put his Suzuki RM-Z250 inside the top ten in the opening laps of Moto 1.

Carson Mumford was fast all day, and earned enough points, like two of his BarX/Chaparral Suzuki teammates, to move his RM-Z250 up two positions in the season points standings.

"It wasn’t exactly the day I was hoping for," said Mumford. "In the second moto I crashed two times, so I had to charge every lap to get seventeenth. Fourteenth overall on the day isn’t terrible, but I am ready to get up near the top five." 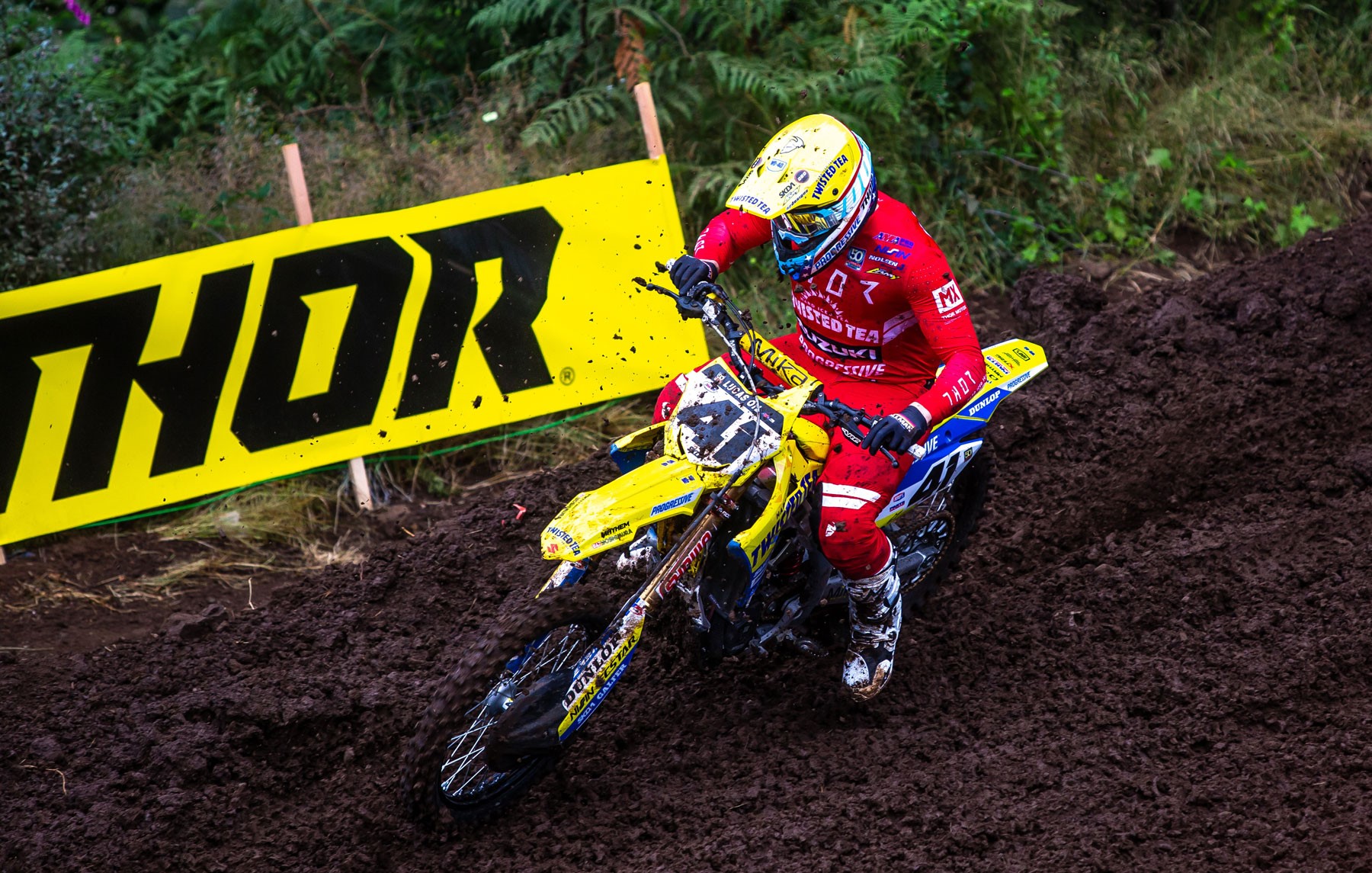 Brandon Hartranft (41) gutted out a good ride in the day's final moto.

Brandon Hartranft clawed back from a tough opening moto to end the day strong on his Twisted Tea Suzuki RM-Z450.

"In qualifying, I felt really good. I thought today was going to be a great day for me and the team." Hartranft then told, "But in the first moto, right off the bat, I ended up being in a pile-up. I got ran over by a couple of riders and tweaked my ankle a little bit, so I skipped Moto 1. Before Moto 2 I got some therapy and got my ankle taped up. I finished Moto 2 in 18th. I honestly didn't really ride that well; I just wanted some points. It's tough because I felt really strong on the bike." 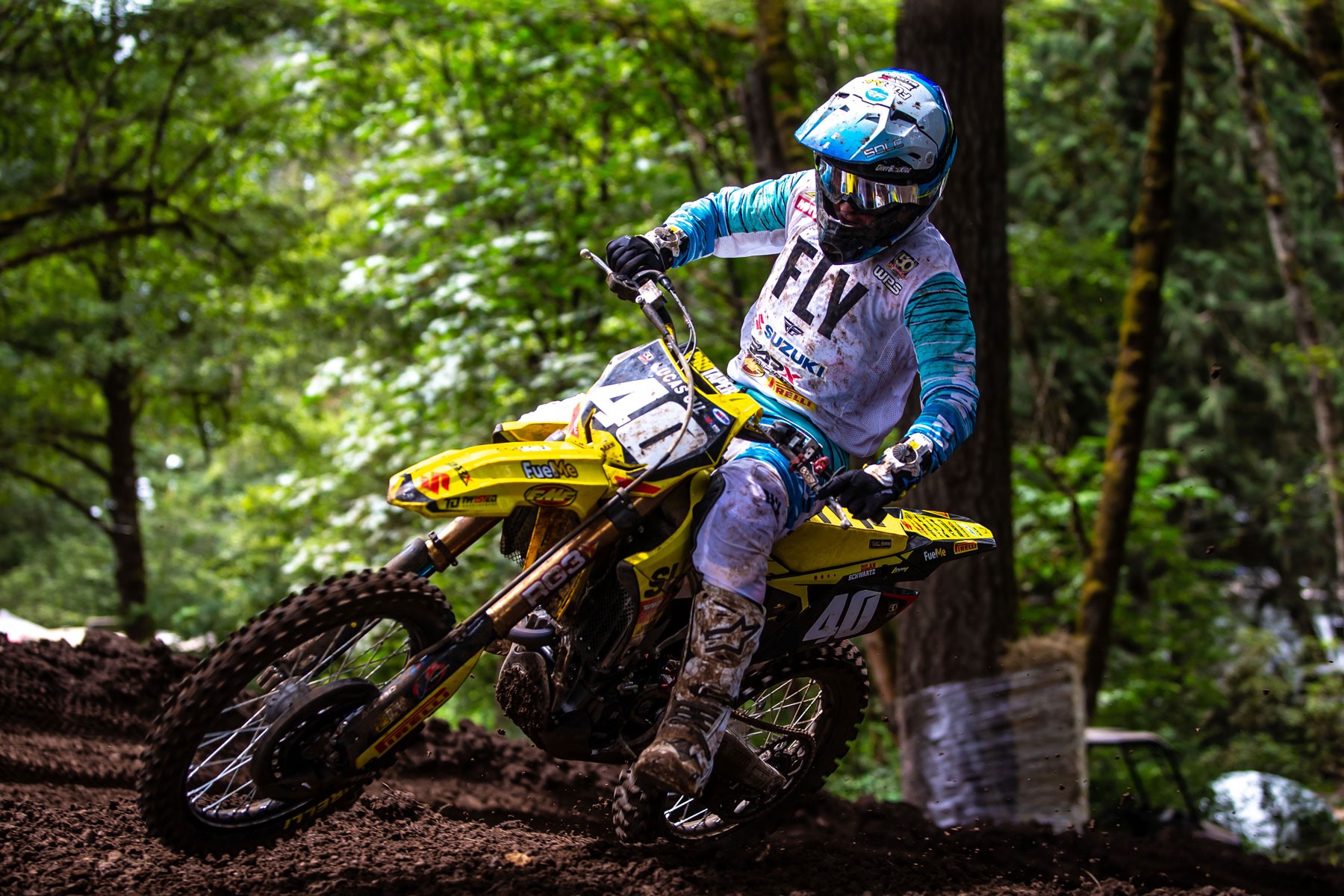 Dilan Schwartz (40) returned to racing and back to form aboard his Suzuki RM-Z250.

The BarX/Chaparral Suzuki team welcomed Dilan Schwartz back to racing after time off due to an injury. After running inside the top ten in the day's opening moto, Schwartz already held his own against racers at their mid-season strides.

"It was great to be back at the races after a long time," said Schwartz. "I got a little tight in the first moto, and the second moto my wrist was sore just from not having enough time on the bike. I’m going to spend the break back on the bike and getting back up to speed for the last four rounds!"

"It was a mixed day at Washougal," said Team Manager of the Twisted Tea/H.E.P. Motorsports/Suzuki Presented by Progressive Insurance team Dustin Pipes, "Marshal had a good day battling for a top ten. It was tough finishing so close in 11th, but I like the fight he showed all day. Brandon, unfortunately, had a tough day with a first corner crash in the first moto. After getting checked out by the Asterisk medical team he toughed out the second moto, which was good to see. He will get looked at further to determine his status for the next event. The bikes worked great all day and the staff worked well together."

The 12-round AMA Pro Motocross Series takes two weekends off before the final four rounds of the summer series. The riders and teams will use the momentum from Washougal to charge into Unadilla in New Berlin, New York on August 13th seeking more personal bests and more upward moves in the series standings.

Please visit SuzukiCycles.com/Racing/Motocross and HEPMotorsports.com for more team news, race updates, and all the latest information.