BREA, Calif., July 11, 2022 — Suzuki and Team Hammer closed out an encouraging weekend of MotoAmerica competition at WeatherTech Raceway Laguna Seca on Sunday with their rookie aces once again leading the charge.

Vision Wheel M4 ECSTAR Suzuki’s Tyler Scott continued his successful upward progress, adding another MotoAmerica Supersport runner-up result along with fast lap honors to a weekend that had already seen him collect pole position and a second-place podium on Saturday.

The 16-year-old was embroiled in a six-rider charge for the lead early aboard his next-generation Suzuki GSX-R750 that also included the team’s talented substitute rider, Cory Ventura.

Ventura slotted into third early. He then took advantage of Scott’s back-and-forth battle for first to slip into second and then, momentarily, the lead as the hectic race continued to change shape in the early laps. 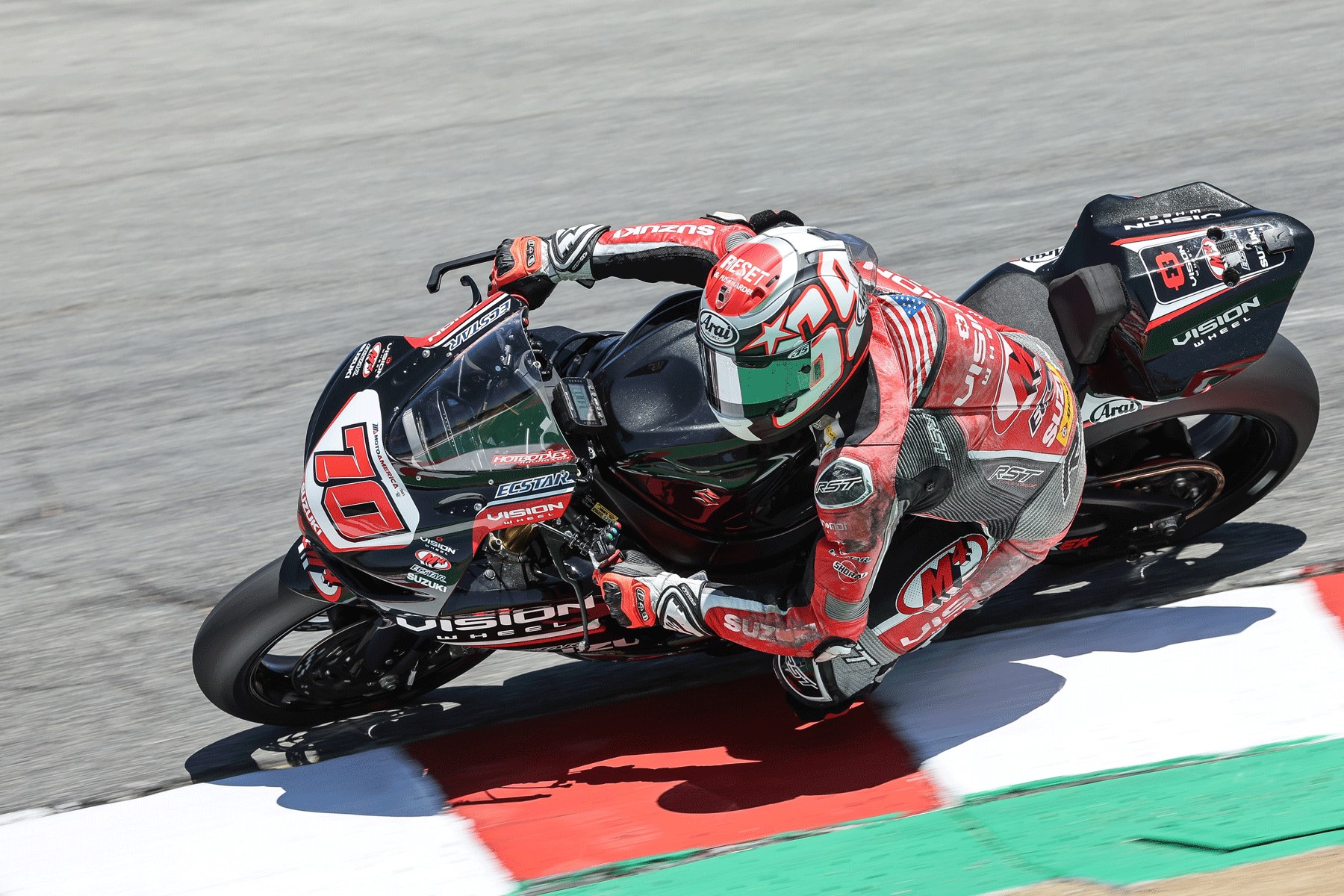 Tyler Scott (70) continues to impress with his sixth podium in his rookie season in the Supersport class aboard the GSX-R750.

Scott pulled off a remarkable save on lap 3 after hitting a bump on the track but was shuffled down to fourth in the aftermath. The youngster then set about the difficult task of clawing back up the order as Ventura settled into sixth.

During his charge, Scott ripped off the fastest lap of the race – a 1.26.985-second lap that ultimately proved more than a half-second quicker than any other rider could manage. He leveraged that pace to slash back up into second and then proceeded to defend the position to the checkered flag.

The result was the rookie’s sixth podium of the year and the fifth occasion where Scott finished in either first or second position. He said, “The Vision Wheel M4 ECSTAR Suzuki worked great in the first part of the race, but I got bottled up and shuffled back. I had to get my pace back and then hold onto second while battling grip issues,” stated Scott.

“We’re improving every round – both with my riding and with the bike set-up. I definitely think we’ll be on the podium a lot more and hopefully get some more wins.” 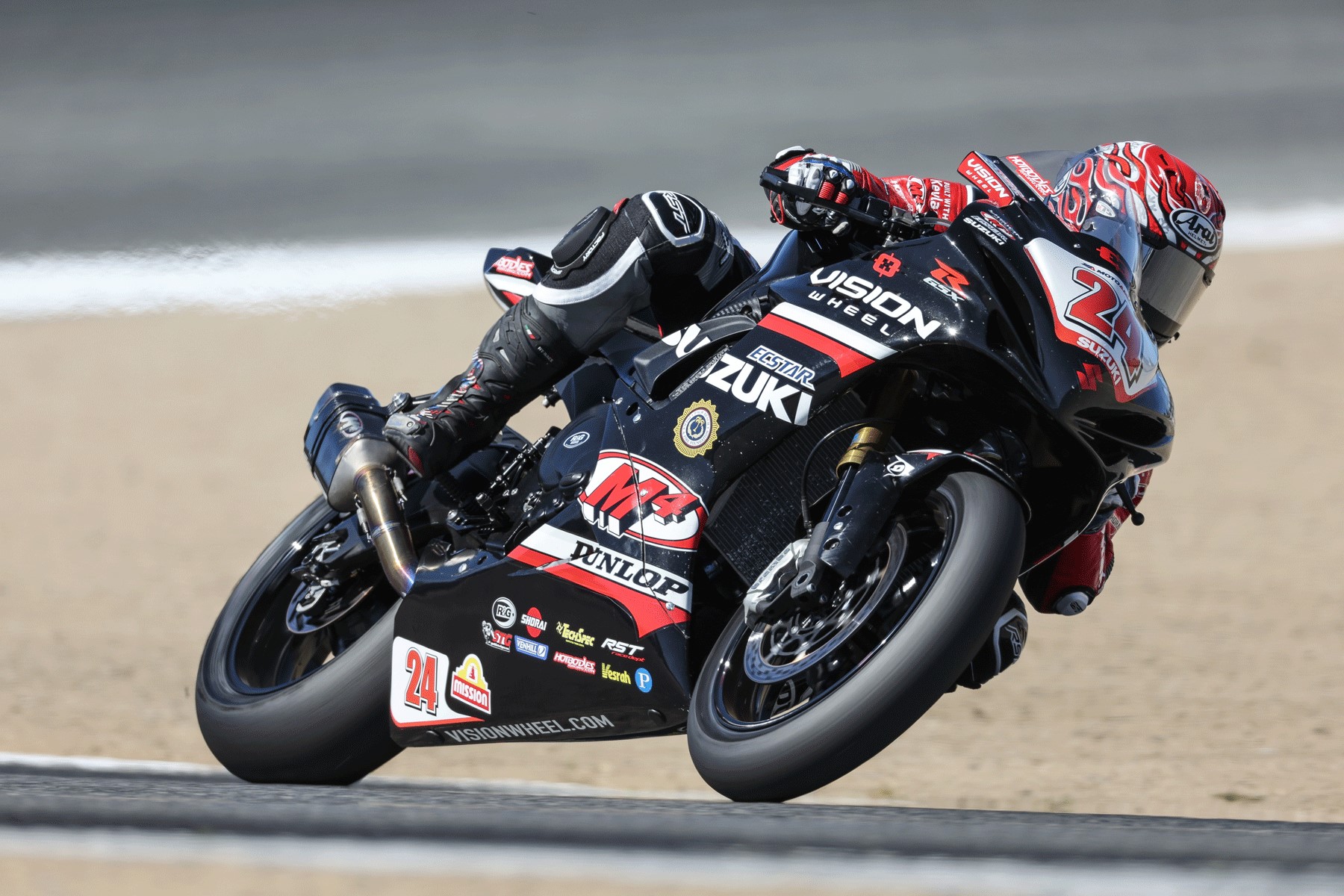 A top five for Cory Ventura (24) in Race 2 to cap off a great first weekend aboard the Vision Wheel M4 ECSTAR Suzuki GSX-R750.

Ventura gained a position on the race’s final lap to move into fifth, earning the squad two top-five finishes in a single Supersport race for the fourth time this year.

Ventura said, “I got the call to ride for the team last Friday, and I knew I had to do it. I’ve been training hard for this moment for a long, long time. Early in the weekend, it was a little hard to transition to the Supersport bike, but slowly we improved throughout the weekend to where we were able to run up front for a couple of laps today. We’re still learning… I wish we had just one more day and one more race tomorrow!”

Young gun Liam Grant missed the race due to a concussion. He crashed in qualifying on Saturday. The GSX-R750 proves to be a front runner in the new generation Supersport class with 45% of the top ten this weekend being Suzuki’s.

Meanwhile, Richie Escalante put the finishing touches on his best weekend yet as a Superbike pilot, backing up Saturday’s career-best fourth-place finish with yet another fourth on Sunday. 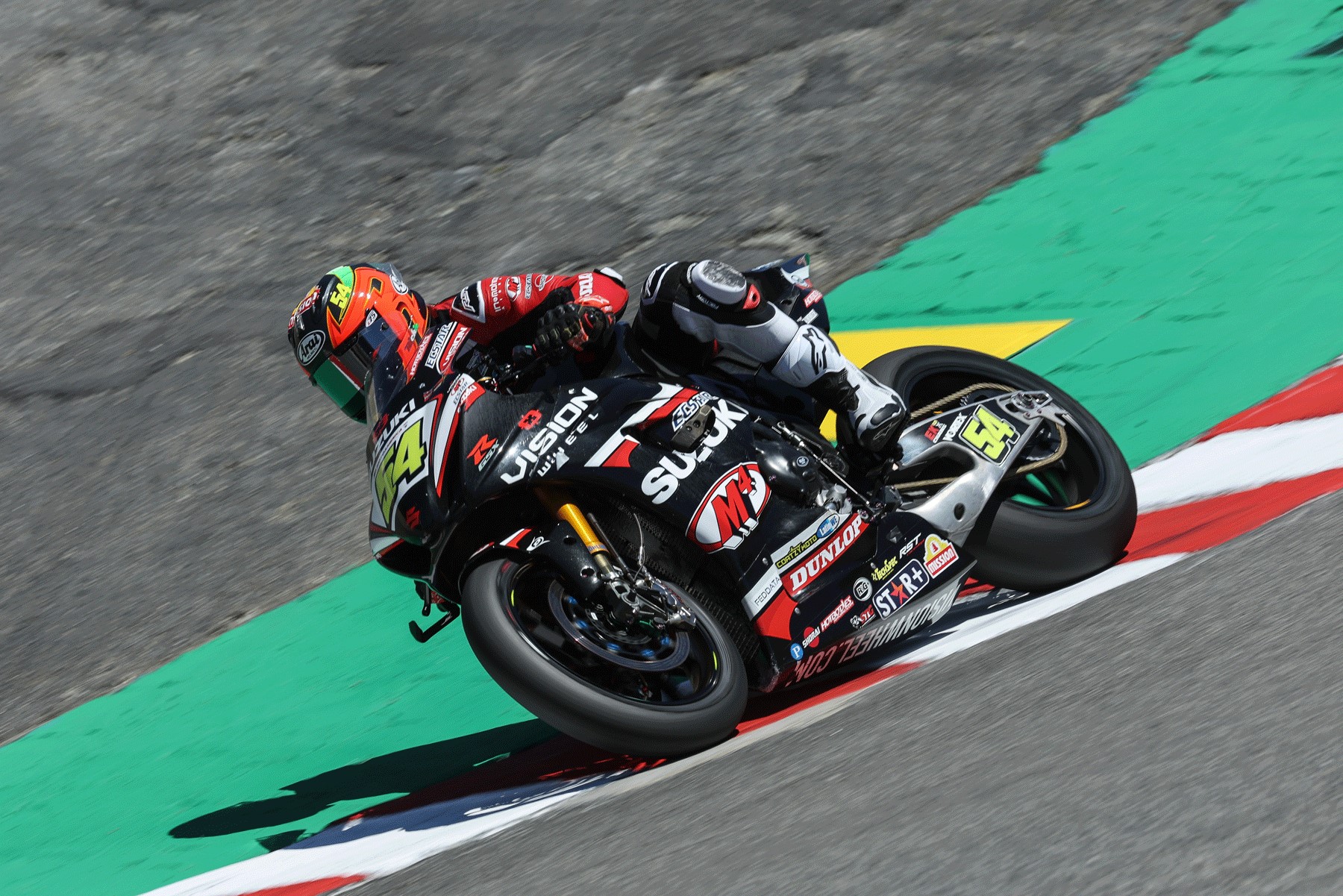 Back-to-back fourth-place finishes for Richie Escalante (54) aboard the GSX-R1000R and is looking to gain even more speed in the second half of the season.

Escalante powered into fifth early aboard the Vision Wheel M4 ECSTAR Suzuki GSX-R1000R and then slipped up the inside of a pair of veteran Superbike stars to move into third on lap 2. He then maintained the position until being displaced on lap 4 of 20.

Escalante was overtaken by another competitor on lap 6 but regained the position on lap 11, which he controlled to the contest’s conclusion.

Escalante declared, “For today, the team tried to improve the bike for the later laps when the tire goes off. The bike’s handling was more calm and it was easier to do consistent laps. I got a strong start and also was able to use our great starting position. We were happy to battle for the podium early in the race, and I was happy with the pace today. In the end, we were 17 seconds behind the leader again at the checkered flag, but I think we made many steps forward.”

“Thanks to the Vision Wheel M4 ECSTAR Suzuki team and my crew for doing a great job. We need to find a half-second a lap to be fighting for the podium every time, but we are much closer than we were earlier in the season. I like Brainerd. It is a cool track and super-fast. Hopefully, we will be able to continue improving. 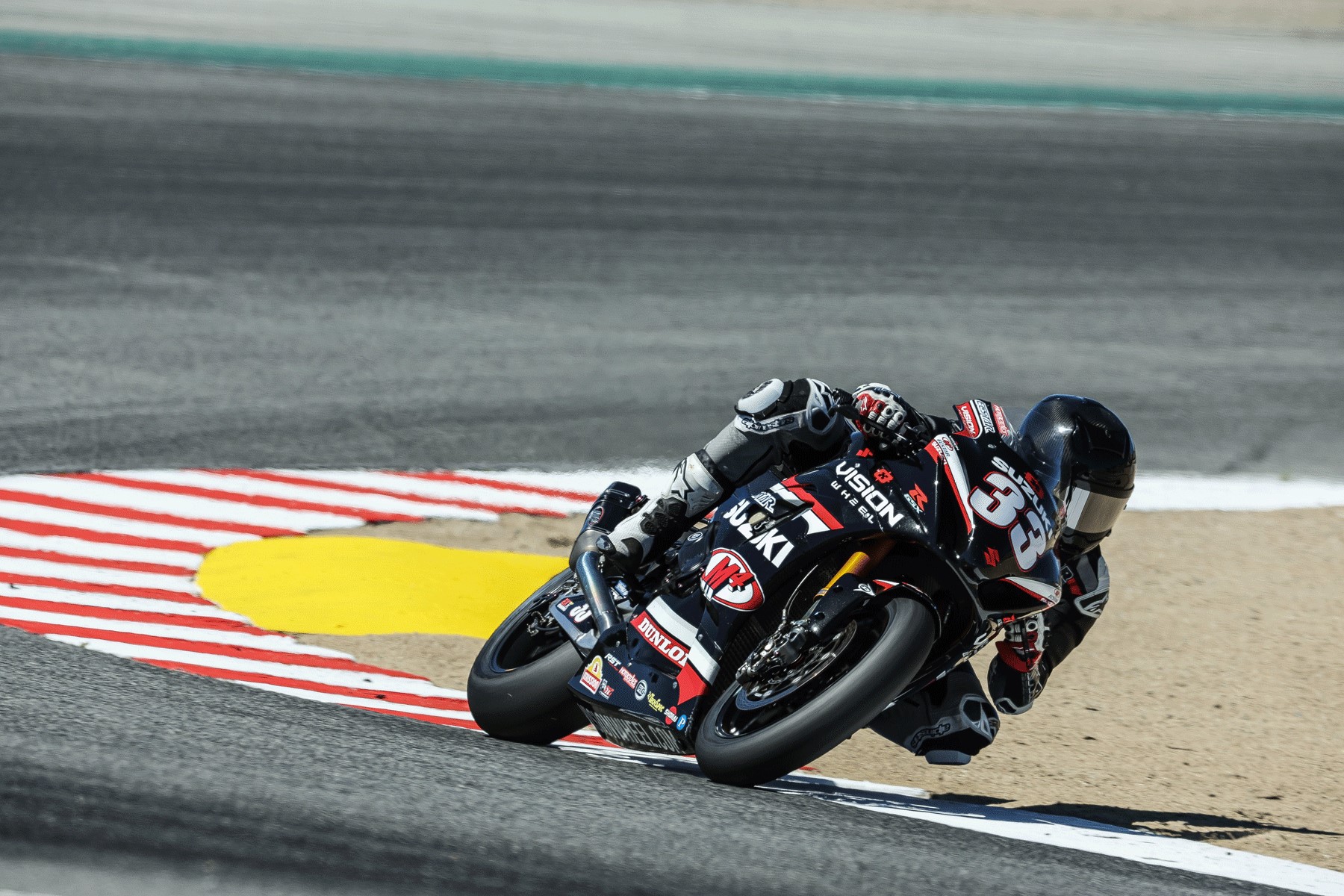 The super-sub Kyle Wyman (33) collects a top ten on Sunday at the iconic Laguna Seca circuit.

Kyle Wyman bettered his strong Saturday with an eighth-place result in substitute duty aboard the second Vision Wheel M4 ECSTAR Suzuki GSX-R1000R, collecting a seventh-place finish on Sunday. Wyman steadily picked up his pace as he gained seat time aboard the bike, posting the best lap nearly six-tenths quicker in Race 2 compared with Race 1.