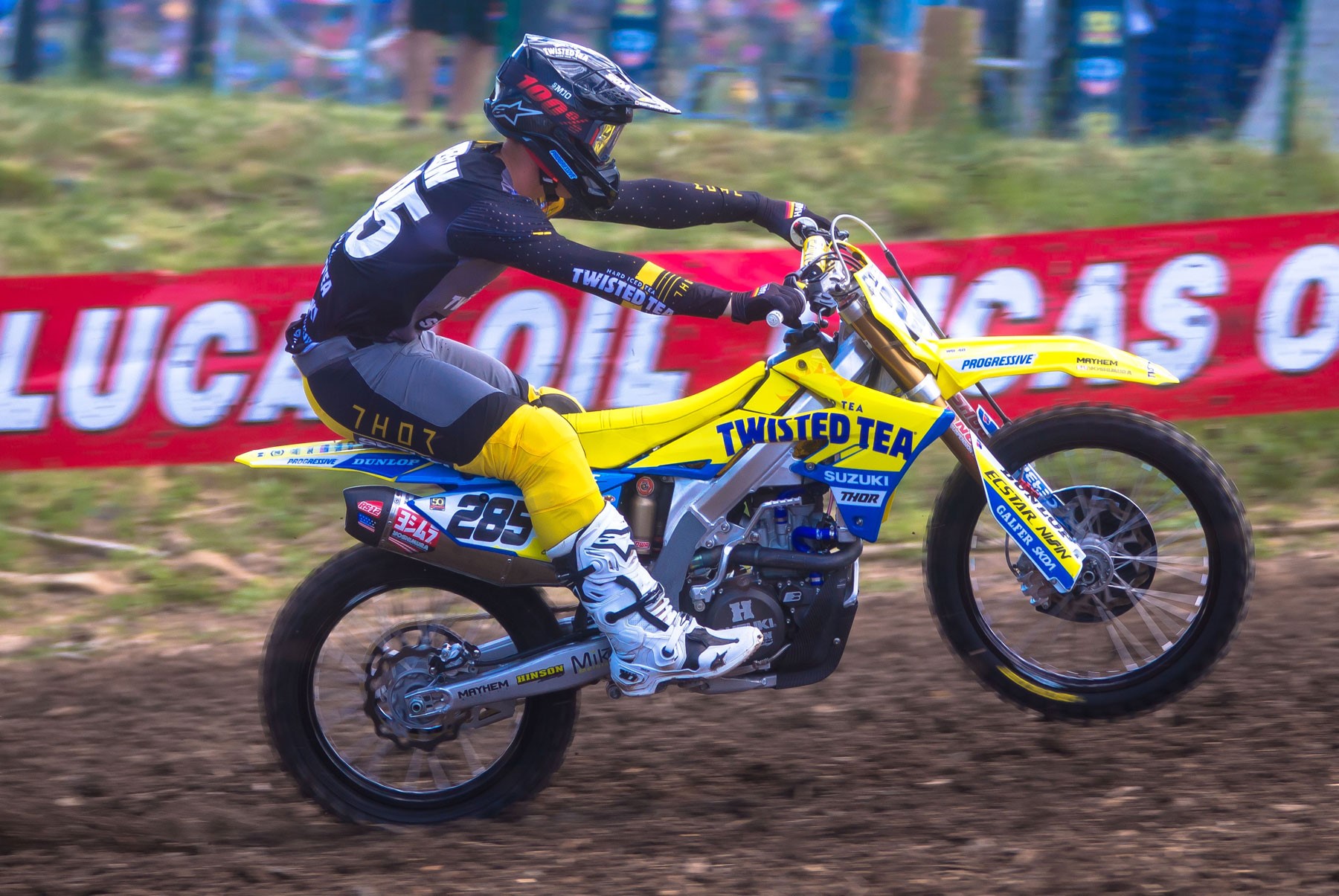 Marshal Weltin (285) delivered instantly after accepting the offer to join the Twisted Tea Suzuki team for the remaining rounds of the 2022 season.

After only two test days on the team race bike, Marshal Weltin was at home with the precision handling of the Suzuki RM-Z450. His transition from his privateer effort to the Twisted Tea race team showed as he upped his game and jumped up two spots in the championship points standings from his Colorado results.

"This was my first round with the Twisted Tea HEP Motorsports Suzuki team. Everyone's got a very positive mindset," Weltin said about joining the team. "The race went really well. I had some decent starts, and the bike was on point all weekend. I'm really happy with my set-up. I was comfortable right away after jumping on the bike and I'm happy with the results. We definitely want to keep building but I think it's a good platform. The track was just absolutely brutal today. I went 15-13 on the day for 13th overall and ended up getting my personal best overall finish in the 450 class." 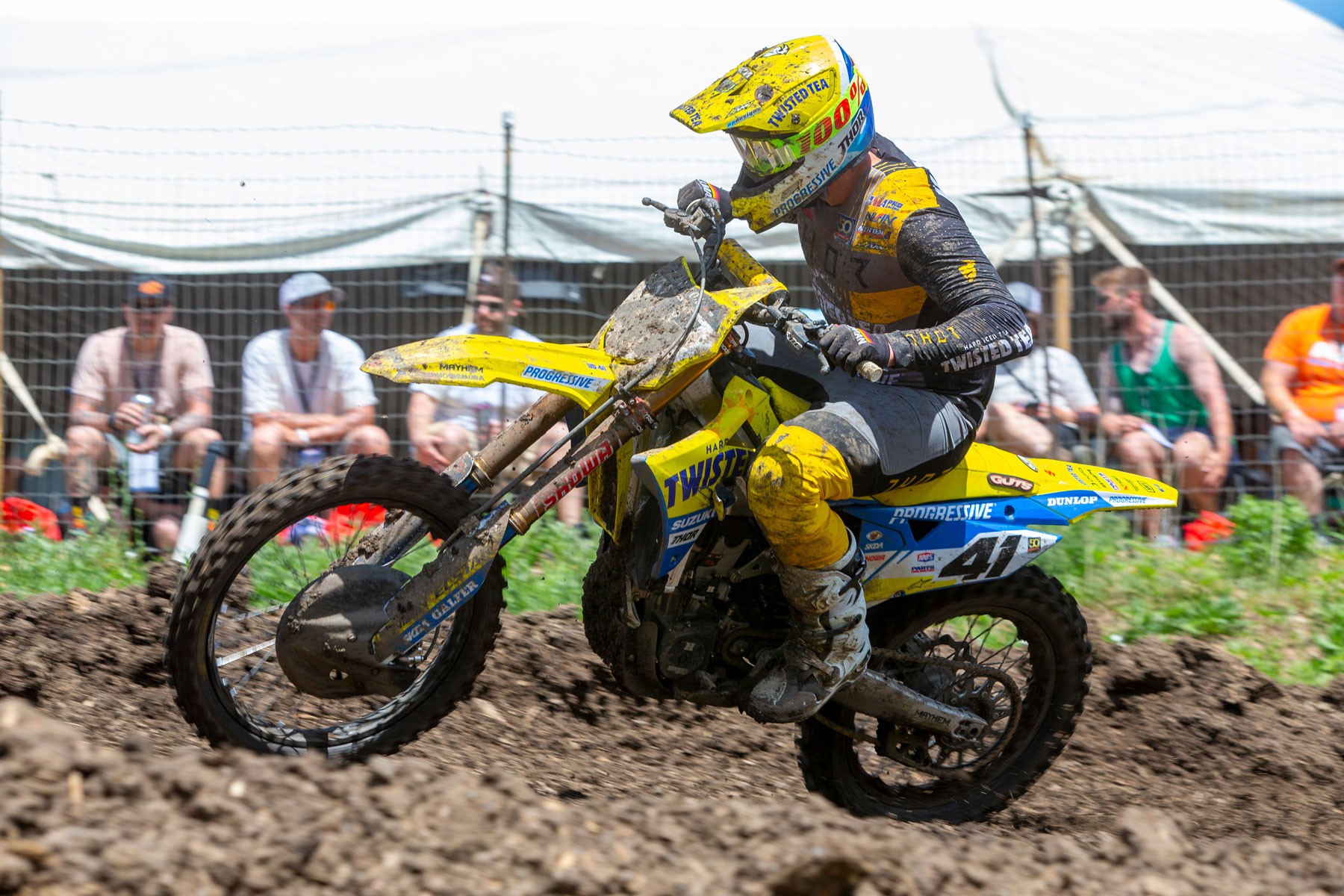 Brandon Hartranft (41) made strides in Colorado and brought back his best result so far in the 2022 outdoor series.

Brandon Hartranft gained speed and it showed on the results sheet. Hartranft and his Twisted Tea Suzuki RM-Z450 delivered their season-best moto and overall finishes on the high-speed Colorado track. The points gained pushed "The Brick" two positions higher on the championship leader board.

"It was a solid day. I was 15th in practice which was mediocre," Hartranft reported. "In the first moto, I battled with my teammate for 14th the whole moto and then got by him with about two laps to go. He was riding great. In Moto 2 I had a really bad start and had to come from far back. I caught up to 13th then another rider got past me with about five laps to go. I'm not happy with the result, but we made some progress. We'll keep fighting and hopefully, we can squeeze into the top ten soon." 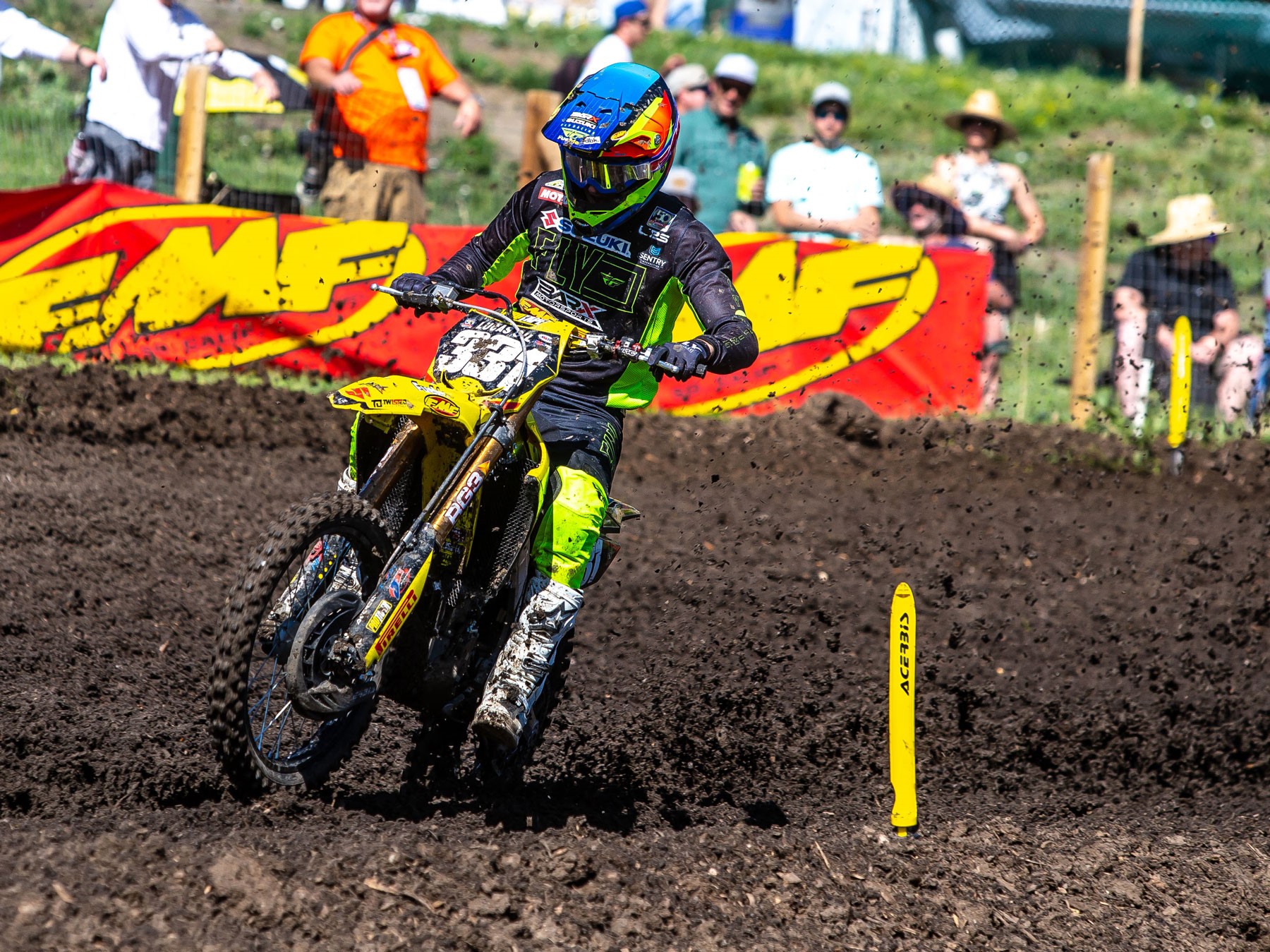 Derek Drake (331) put in a brilliant charge in the opening 250 class moto.

After a tough opening lap of Moto 1, Drake went on a tear on the high-altitude Colorado track. Drake and his BarX/Chaparral Suzuki RM-Z250 overtook fourteen riders in the first two laps to claw his way into position to earn championship points. Moto 2 was a smoother affair for the young rider where he posted another strong finish. His overall results matched his best 2022 motocross finish thus far.

"Thunder Valley was tough, I got altitude sickness and couldn't keep any food or liquid down between motos so I was really weak," Drake reported. "In the first moto, I went down on the first lap after the start. I got going and pushed back up to 15th. I had nothing in me in the second moto. I did all I could to finish the race. The good side is that the bike felt good so I'm excited to rebound next week in High Point!" 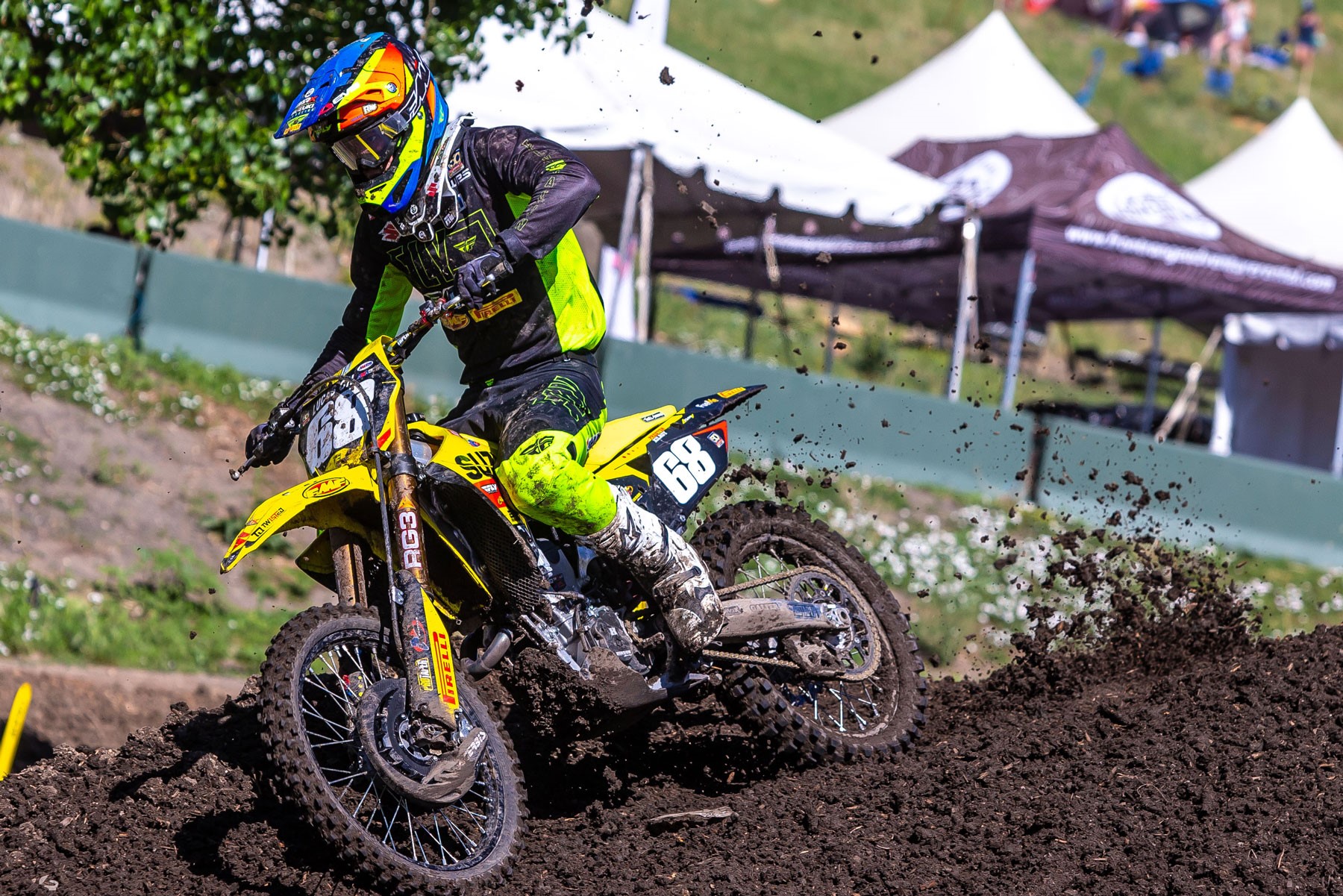 Preston Kilroy (68) re-joined the series and re-established himself among the front runners.

Preston Kilroy was given a rude return to the series; just a few feet out of the starting gate in Moto 1 a crashing rider's bike swept Kilroy's tires out from under him. Kilroy found himself picking his race bike off the ground as the pack roared away. Kilroy put his head down and put his Suzuki RM-Z250 power and handling to good use, charging throughout the moto. Moto 2 was smoother for Kilroy and the young athlete puts points on the board to start his 2022 season with the speed for a great summer.

"I came into the weekend with two weeks on the bike since my injury during supercross. I wanted to just start racing and learning as I went," Kilroy said. "I had a crash off the start in the first moto that left me with bent handlebars, but I was able to come up through the pack pretty good. In the second moto, I didn't get a very good start, but I just tried to push as long as I could. I’m glad to be healthy and we're going to work hard to be better for next weekend.

"It was a step in the right direction this weekend at Lakewood," Twisted Tea/H.E.P. Motorsports/Suzuki Presented by Progressive Insurance Team Manager Dustin Pipes summed up the event. "We welcomed a new rider with Marshal Weltin and he plugged in seamlessly, achieving his best overall finish with only a few days with the team. As he gets more situated with the bike and personnel, I expect him only to improve. Brandon had a better day as well but starts held him back. The riding was good, but you can't start outside the top 30 with this field. We're eager for High Point."

The Suzuki teams travel next to High Point Raceway in Mount Morris, Pennsylvania where they'll continue their march up the points standings.