BREA, Calif., May 30, 2022 — The 2022 Lucas Oil AMA Pro Motocross Series started up its 12-round series with the opener at Fox Raceway in Pala, California. Twisted Tea Suzuki Presented by Progressive Insurance's Brandon Hartranft put in a strong Moto 1 ride and an inspiring Moto 2 charge aboard his Suzuki RM-Z450. Justin Bogle used consistency over the outdoor series' two-moto format to tally championship points with his Twisted Tea Suzuki RM-Z450. In the 250 class, BarX/Chaparral Suzuki's Derek Drake sliced through the deep ruts and powered through the rough chop to collect 250-class points with his Suzuki RM-Z250. 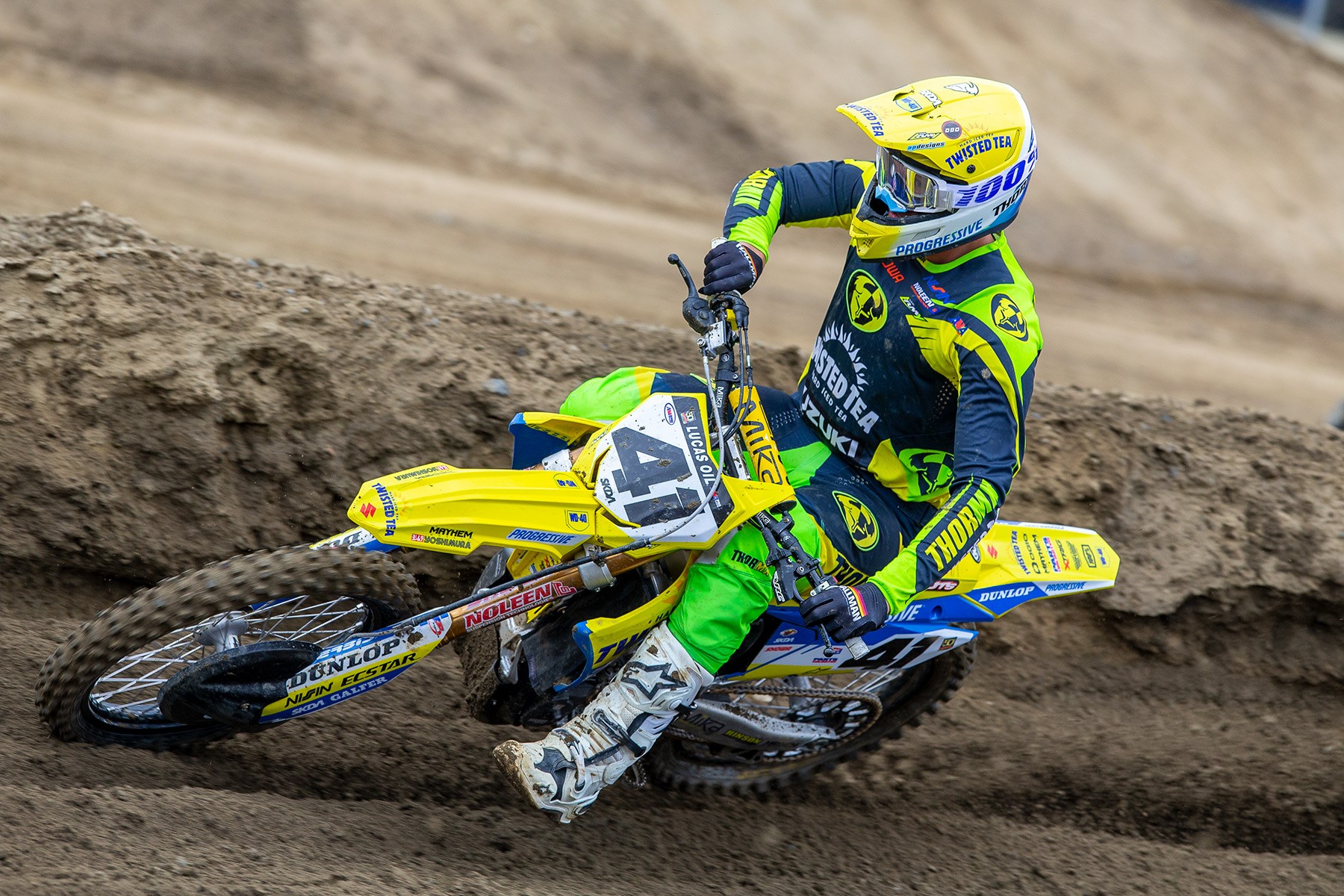 Brandon Hartranft (41) was on a fierce charge in Moto 2 at the Pala 1 national. He recovered brilliantly from a holeshot pile-up.

Brandon Hartranft carried his supercross speed over into the longer, tougher motos of the outdoor series. In Moto 1 the premier class sophomore battled among the front group with a steady ride on his Twisted Tea Suzuki RM-Z450 that saw him just outside the top ten for most of the race. Moto 2 saw Hartranft tangled up and on the ground in the second corner. "The Brick" put his head down and charged through the field, passing nearly 20 riders in the first 18 minutes of the 30-minute plus two lap race.

"Practice went well. I was 12th in the final qualifying session," said Hartranft. "I felt much better than last year. In the first moto I had a decent start and was in about tenth place. Then I just froze up and had some bad arm pump. I couldn't feel the clutch and brake lever; it just wasn't a good first moto. In the second moto start I got into a little pile-up. After that I was so far back. But I caught all the way back up to 18th. Then we had some issues so I pulled her in. Overall, we're definitely in a better position than last year. I feel good on the bike and am definitely looking forward to heading to Hangtown next weekend." 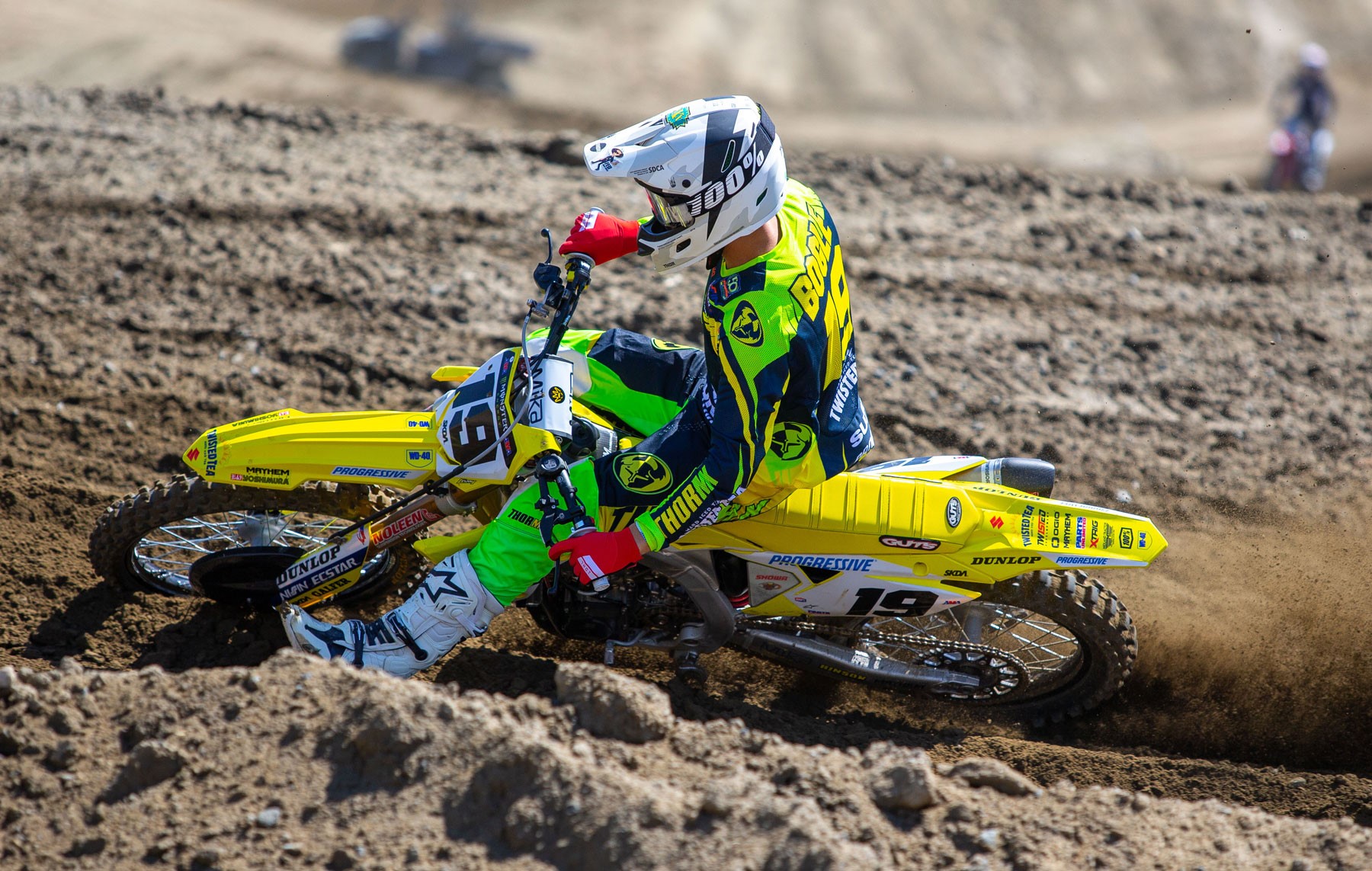 Justin Bogle (19) nearly took the holeshot in the opening 450 moto and started off the season strong.

Justin Bogle leapt into the 2022 motocross series with a fierce charge down the start straight on his Twisted Tea Suzuki RM-Z450 in Moto 1. Bogle entered the first turn inside the top three. The Twisted Tea Suzuki rider had the pace and endurance to put in two points-garnering rides and put his Suzuki in position for a strong outdoor series.

"It was a really rough day for the number 19 machine," was how Justin Bogle summed up his race. "It's tough coming into outdoors with only limited time on outdoor settings trying to get the bike and myself ready. I didn't have any big crashes but had lots of close calls. This place is always really difficult on national day, so I’m thankful to just get out of this round healthy. We'll keep working for another week in California then it's back to Florida where the work continues." 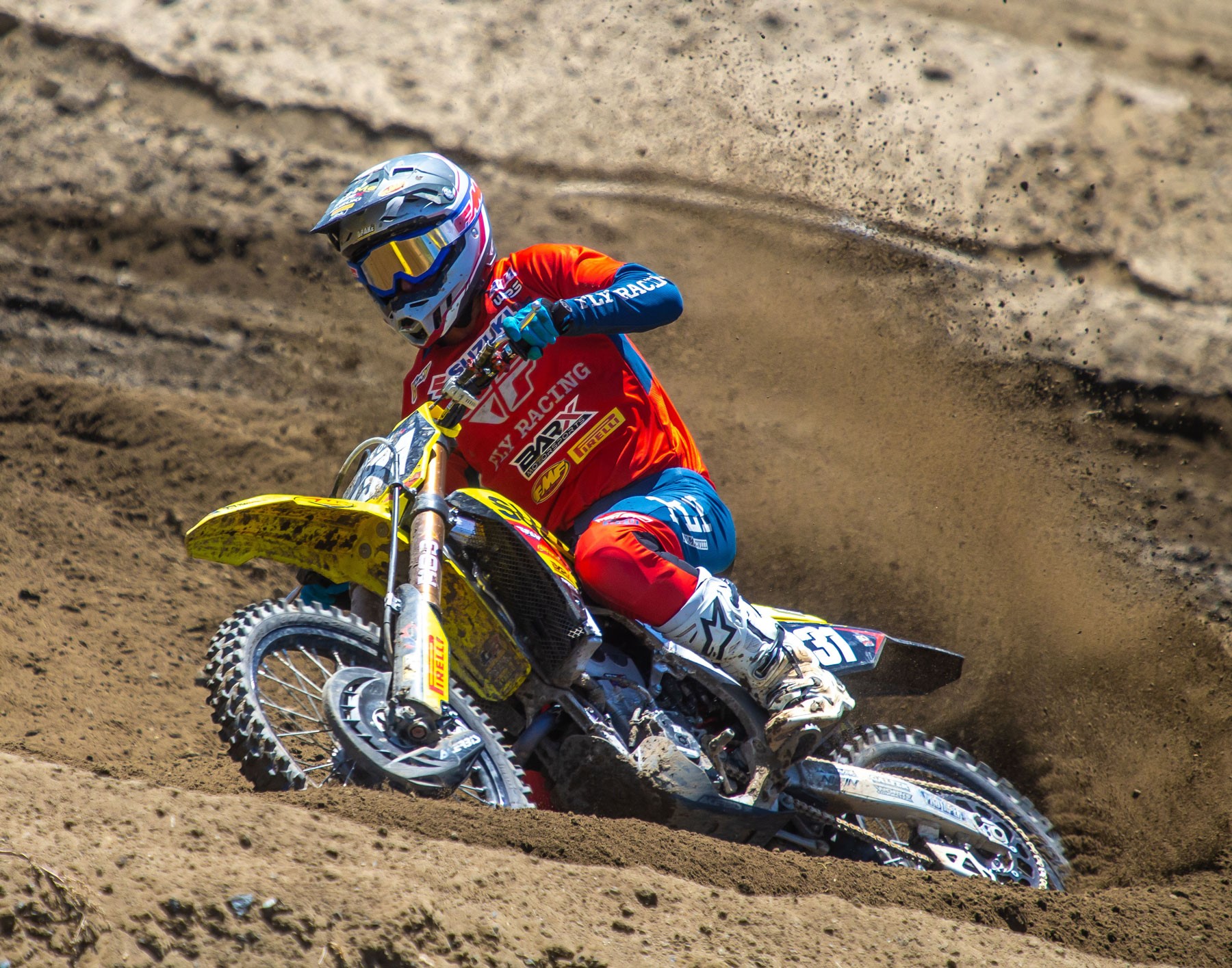 Derek Drake (331) showed strength and speed in his return to the rigors of racing the AMA Pro Motocross Series.

In the 250 class, BarX/Chaparral Suzuki's Derek Drake's lined up again for the outdoor motocross series after two surgeries last summer to correct a rare heart condition. Drake's return to the sport saw him feeling and riding strong. Drake and his Suzuki RM-Z250 were competitive on the rough track, with a challenging surface and layout that tested every athlete's strength and endurance.

"Pala was tough. We struggled with suspension all day," said Derek Drake after the race. "I'm looking forward to testing this week and then Hangtown next weekend. Physically, I felt strong at Pala so that was a positive on the day."

"It was a difficult first round in Pala," stated Twisted Tea/H.E.P. Motorsports/Suzuki Presented by Progressive Insurance Team Manager Dustin Pipes. "We've either had bad luck or struggled to find the proper settings at this track for a couple years now. Unfortunately, we carried on that tradition. Crashes, arm pump, and an issue in the final moto all relegated the team to results we aren't happy with. We're glad to be out of here and set our sights on Hangtown where Brandon achieved his first top five finish last season and Justin also raced in the top ten."

The 12-round series heads to Northern California for round two in Sacramento, California on Saturday, June 4th. The Suzuki teams and racers are ready to march up in the championship points standings and expect to be joined by teammates returning back to racing after some pre-season injuries.