For the second consecutive day, that podium was delivered by 16-year-old MotoAmerica Supersport rookie Tyler Scott. The fast-rising Vision Wheel M4 ECSTAR Suzuki star again battled for the win deep into the contest with a pair of premier-class champions before ultimately guiding his GSX-R750 to a third-place finish. 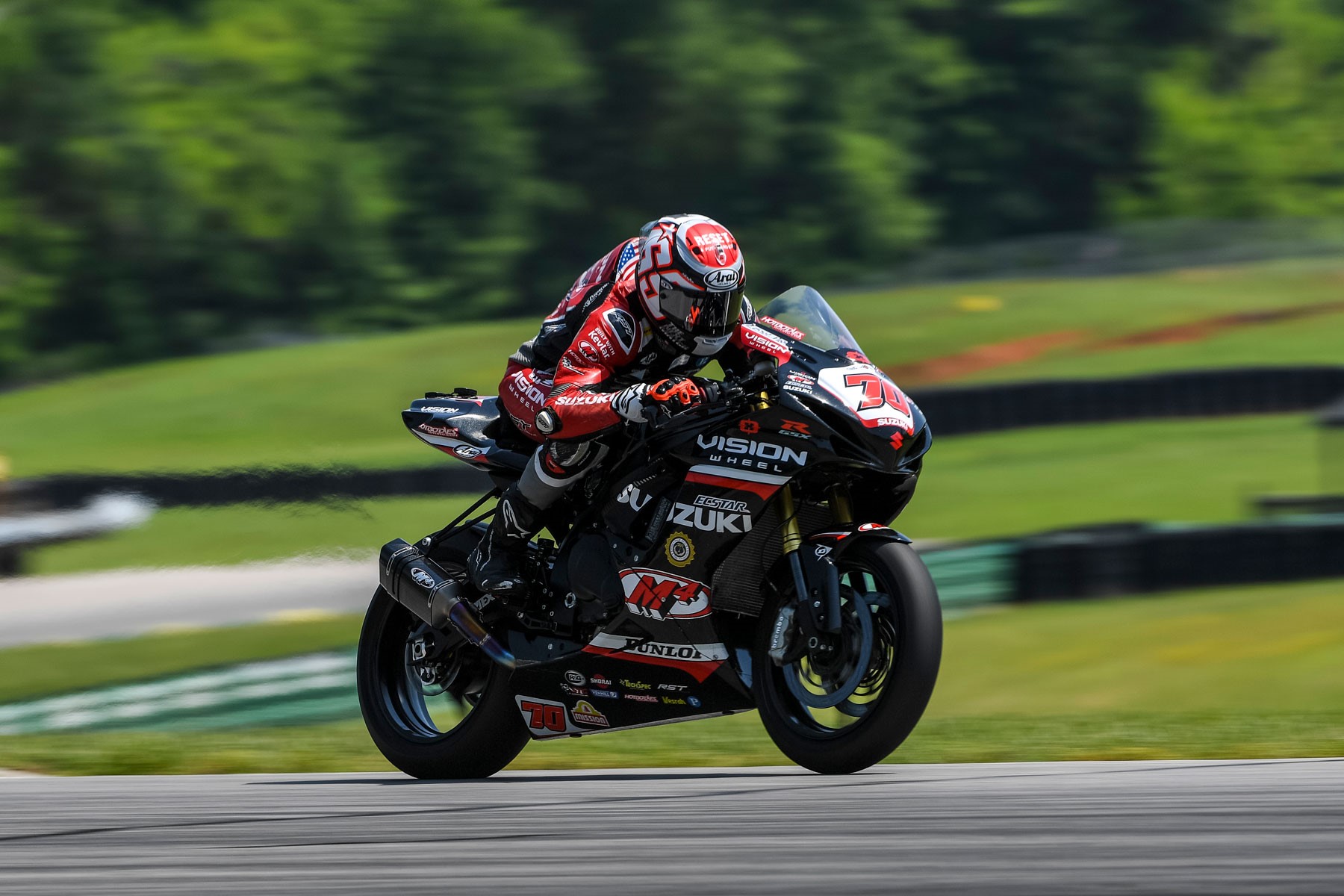 “The bike felt great all race,” Scott said. “We made some changes overnight and they helped, but the pace was faster today. Overall, it was a great weekend. The team has been amazing. The GSX-R750 was outstanding, and I’ll just keep working on my riding.”

Scott’s Vision Wheel M4 ECSTAR Suzuki teammate, Sam Lochoff, rebounded from a chaotic Saturday to come home one spot further back in fourth. The South African did so despite suffering from a lower leg injury and the intense heat to keep his title hopes very much alive. 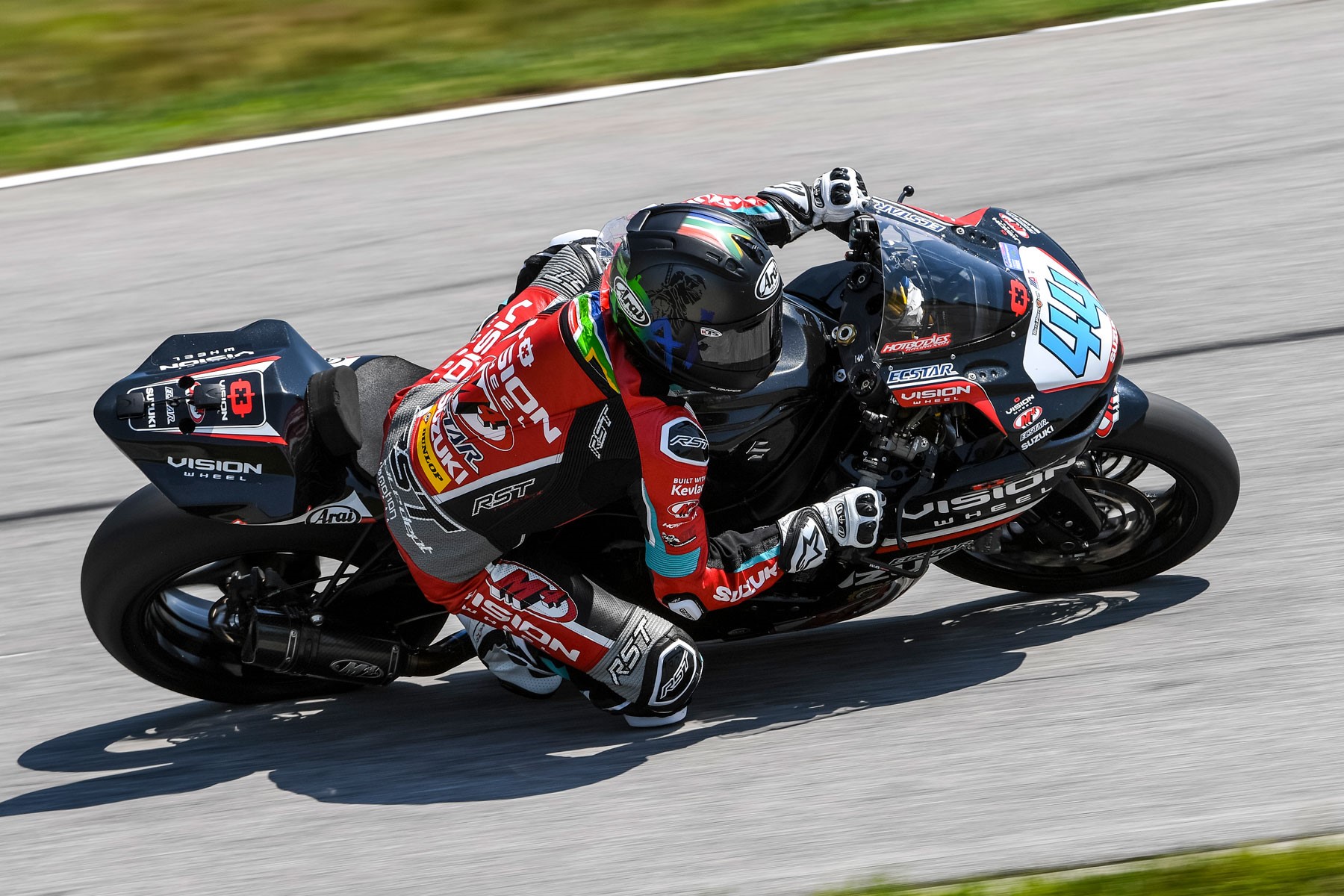 After a tough Race 1, Sam Lochoff (44) bounced back and takes fourth in Race 2.

Lochoff said, “I’m extremely happy about the work my crew has put in on this GSX-R750. I think we’re nearly there, and we just need to do a bit of fine-tuning now. I’m sure we’re going to win some races on it this year.

“I was hurting from yesterday’s crash today, but we’re coming out swinging at Road America,” continued Lochoff. 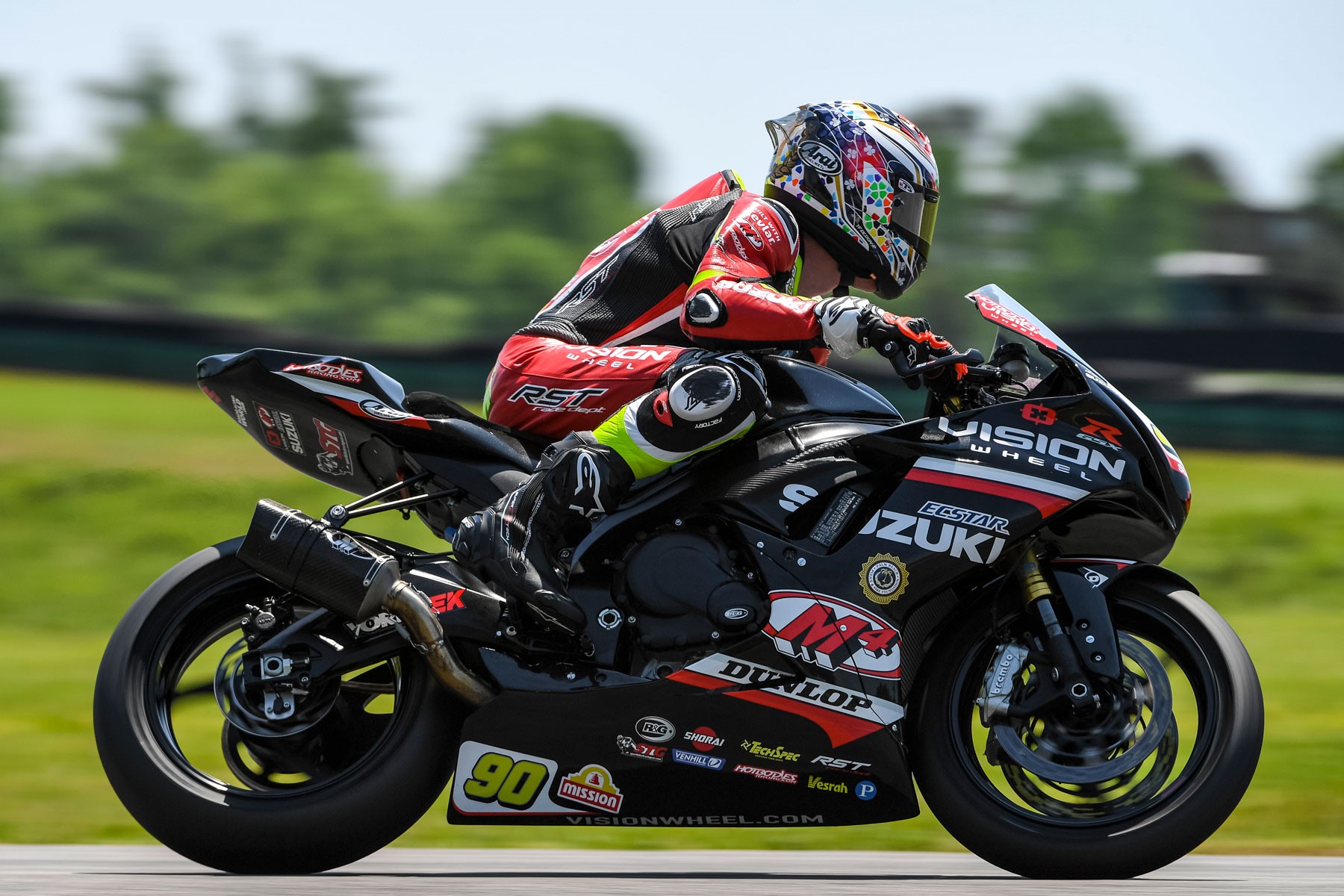 Meanwhile, Vision Wheel M4 ECSTAR Suzuki Superbike teammates Richie Escalante and Jake Lewis spent the bulk of the contest embroiled in an intra-team fight for sixth position. Their battle nearly carried them to the top five, as together they, mounted on their Suzuki GSX-R1000R race bikes, drew in on the position late before running out of laps to challenge for the spot. 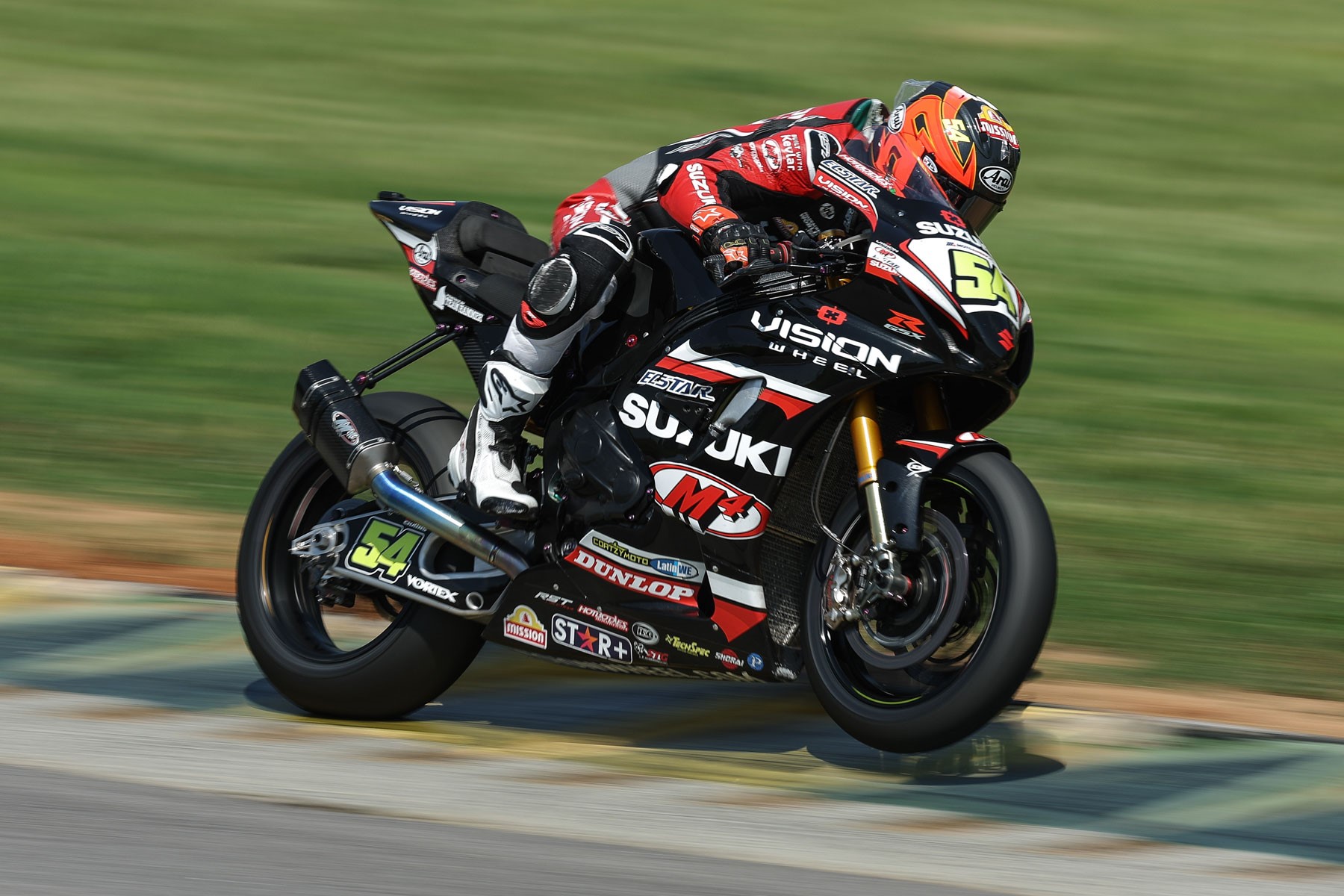 Richie Escalante (54) with another top ten finish aboard his GSX-R1000R.

In the end, rookie Escalante finished in sixth with reigning Stock 1000 champion Jake Lewis close behind in seventh.

Escalante said, “Today was much better. I started both races very well, which is important to stay close with the front group. I didn’t have the pace to go for the podium, but I raced for fifth the whole race. 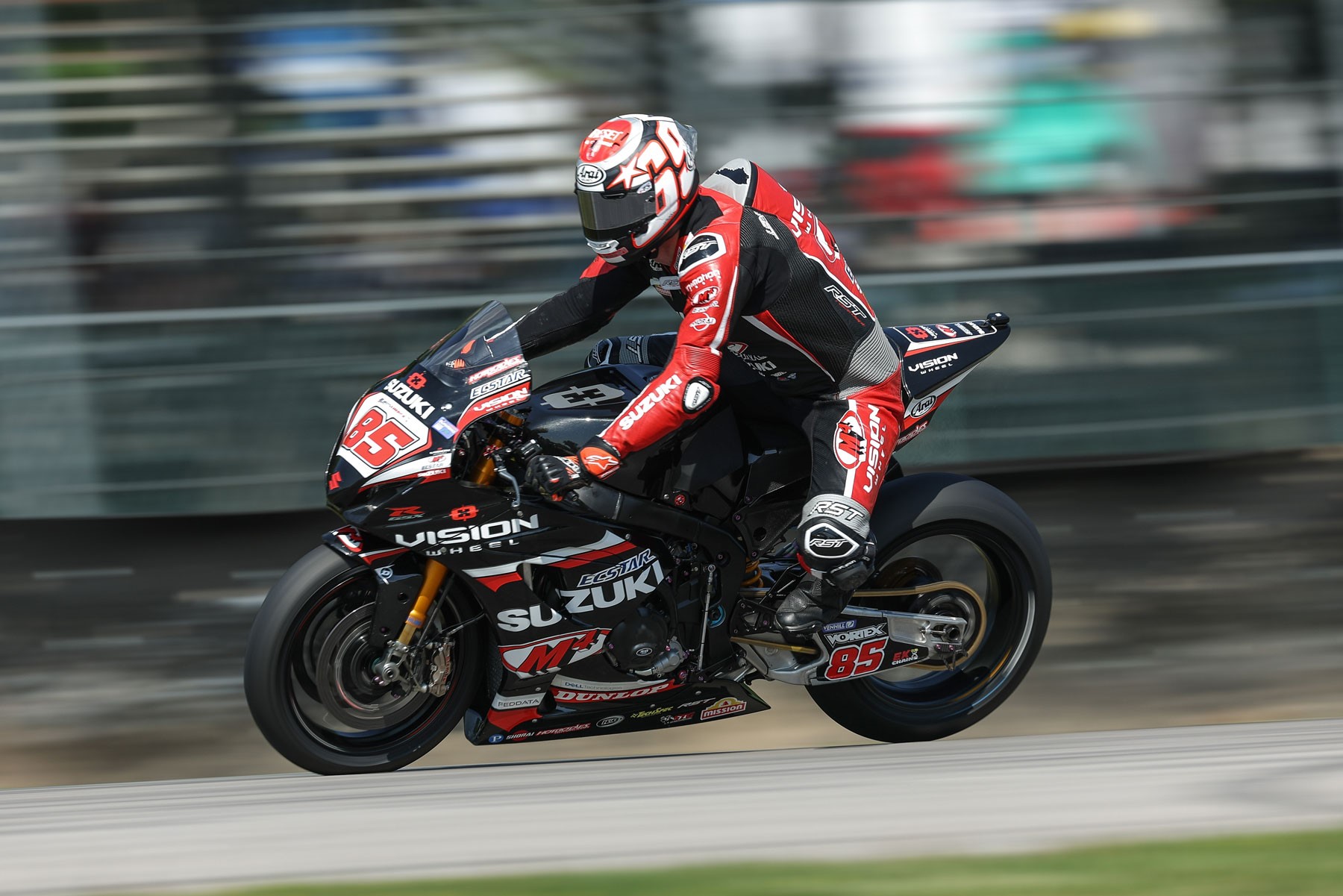 A pair of top-ten finishes from Jake Lewis (85) looks to carry the momentum into the next round.

“I continue to work to adjust my riding style to help the bike work a little better, especially on corner exit. I’m really happy with the process. I’m getting closer over one lap and race distance. I’m pretty happy with that and I’ll keep working to find the next step.”

Team Hammer will be back in action at the high-speed Road America at Elkhart Lake, Wisconsin, on June 3-5.

Suzuki Motor USA would also like to recognize Hayden Gillim aboard his GSX-R1000R for taking double wins in the Stock 1000 class.