16-year-old prodigy Tyler Scott was the headliner for the squad, earning his first-career MotoAmerica Supersport podium in only his third race and his first on the Suzuki GSX-R750. 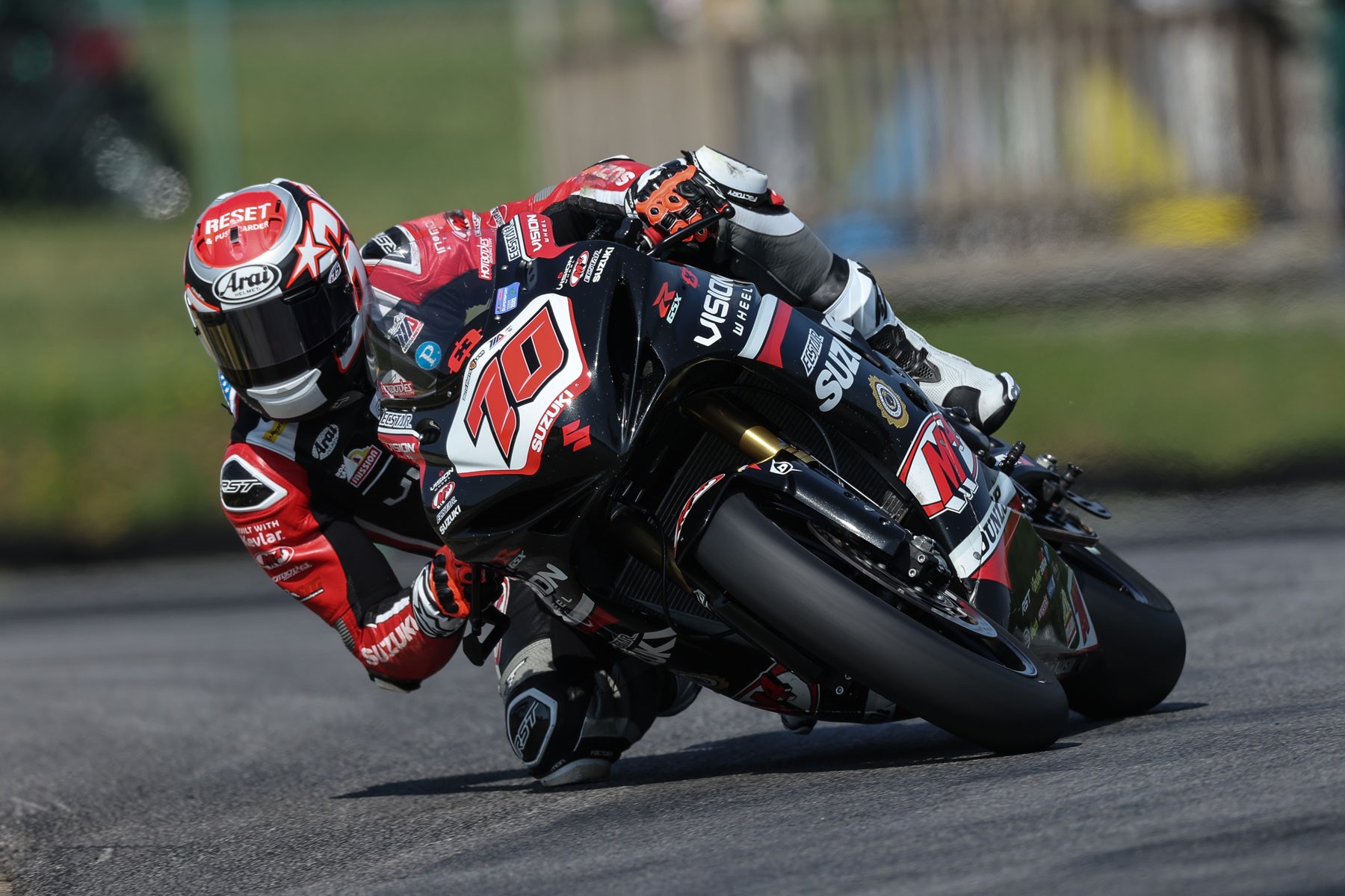 Scott was joined in a spirited multi-rider battle for victory by his Vision Wheel M4 ECSTAR Suzuki teammate, Sam Lochoff. The two opened the race from Row 1 aboard their Suzuki GSX-R750s and immediately jostled for position in a five-rider fight for the lead.

Despite recovering from a recently broken leg, Lochoff took the lead on lap 5 but was pushed off into the grass by another rider moments later, recovering back in fifth position. Scott picked up the fight and the rookie found himself sandwiched between two former premier-class champions while running second at one point.

Scott dove into the lead with three to go but lost a pair of positions when he was forced to make a miracle save of a near highside just to stay upright with a little over two laps remaining. 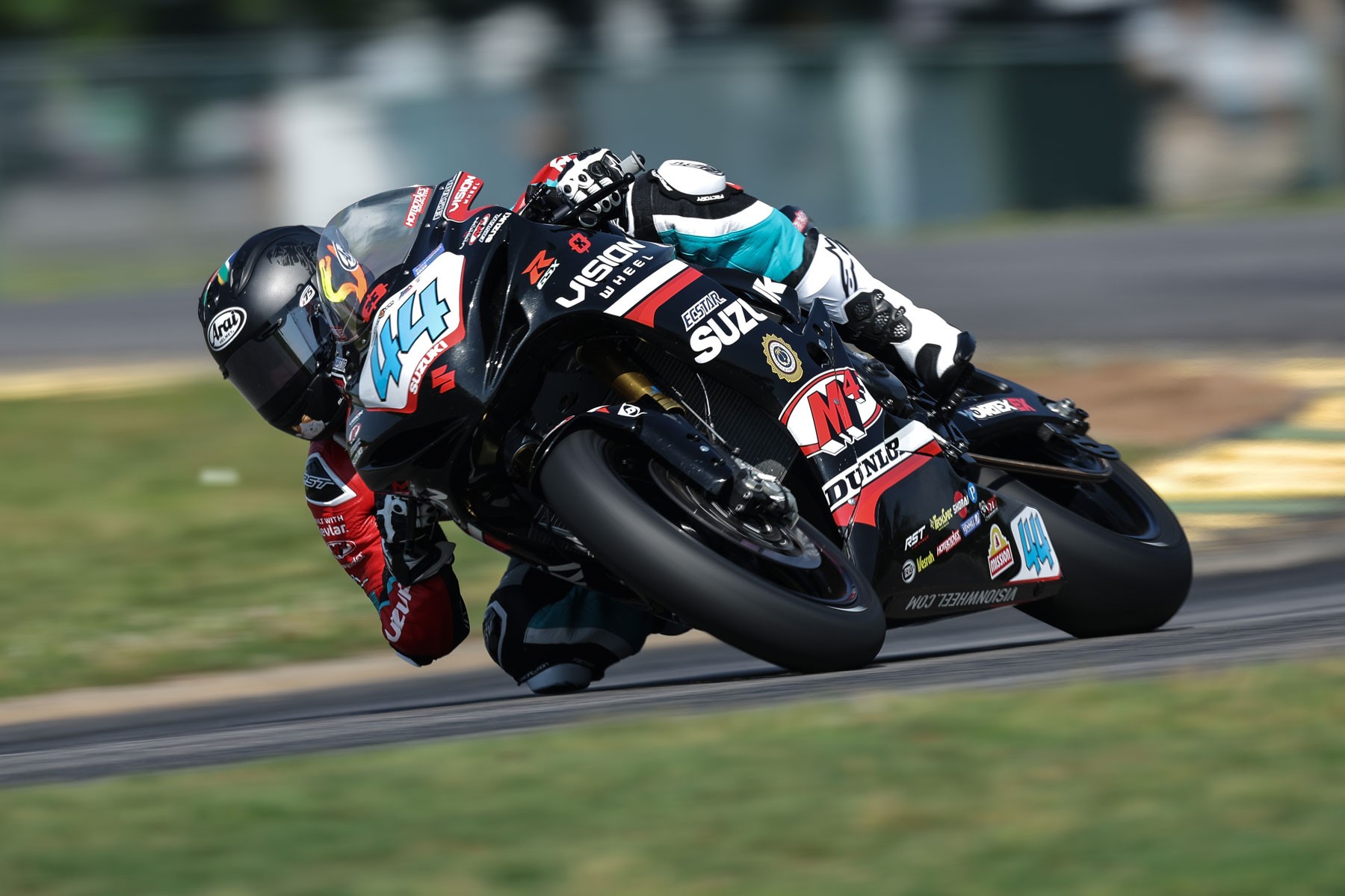 Sam Lochoff (44) showed his speed despite a crash late in Race 1.

Lochoff, who fought his way back into contention, took up the challenge in second at that point, only to crash out of the position on the race’s final lap. That handed the runner-up result back to Scott to secure his maiden class podium.

“It was an incredible race,” Scott said. “It was really hot and the tires were sliding all over the place. I'm really happy to get some decent points after a tough opener, and it feels really good to be on the podium.”

“I'm super excited to be on the GSX-R750 – the bike feels great. Overall, it was a great race, and I couldn't have done it without the entire Vision Wheel M4 ECSTAR Suzuki team.”

Lochoff managed to rejoin the fray to finish in 12th. He said, “It was very hot, but I felt amazing in the race. It’s disappointing that the team and I worked so hard but did not get a good result. There were a lot of positives about the race. We qualified well and I was able to work into the lead. Another rider then sent me off into the grass. It is concerning how someone rode so irresponsibly because this sport is dangerous enough without that type of riding. If I crash or runoff, that’s on me and I always take full responsibility for my mistakes but, in my opinion, that is not what happened earlier in the race. We’re looking forward to seeing how well we can do tomorrow.” 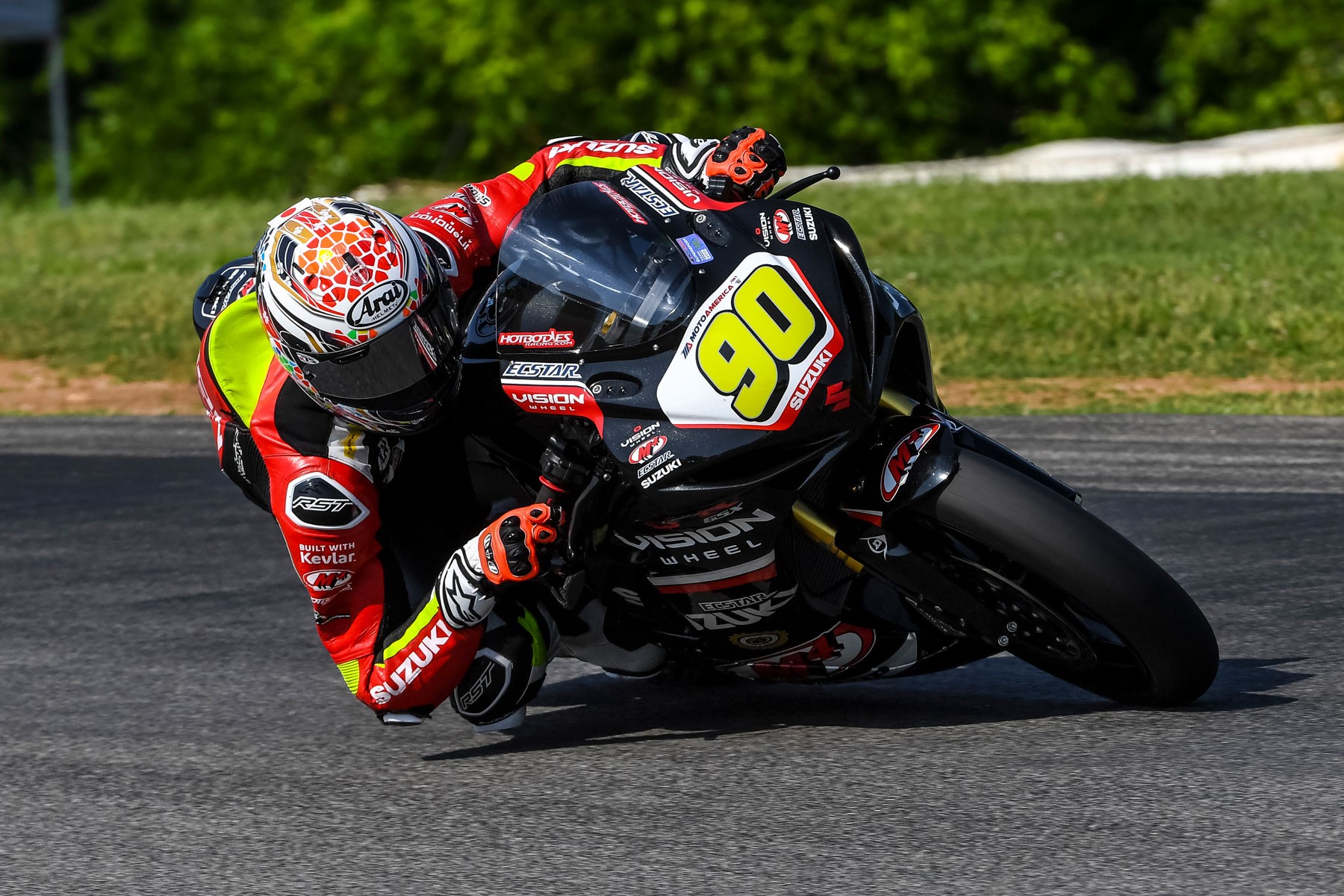 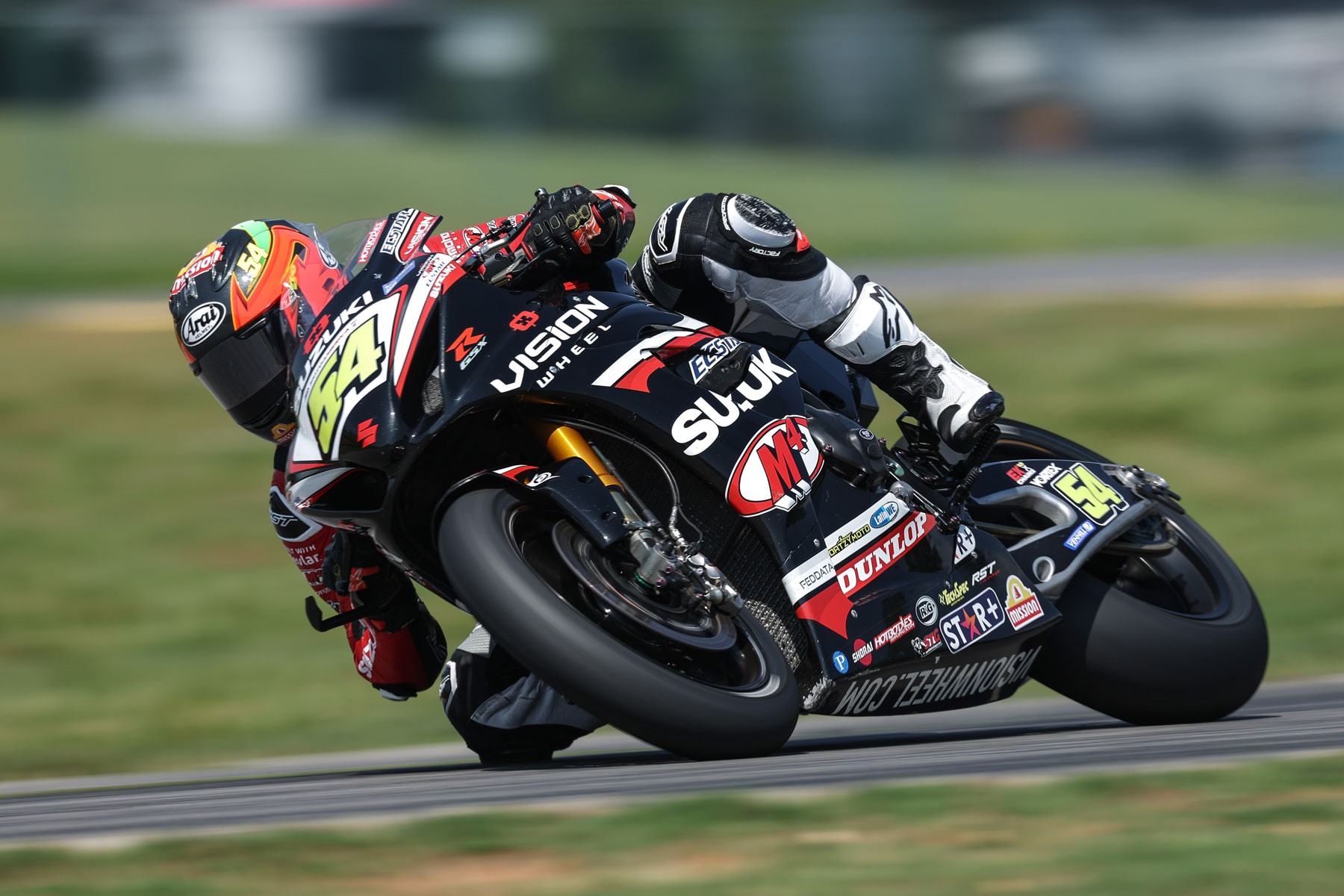 Some setbacks for Richie Escalante (54) in Race 1 but he is looking to bounce back in Race 2.

Saturday’s MotoAmerica Superbike race was a similarly mixed affair. Premier-class rookie Richie Escalante battled inside the top five aboard his Vision Wheel M4 ECSTAR Suzuki GSX-R1000R before an early crash knocked him out of the race. 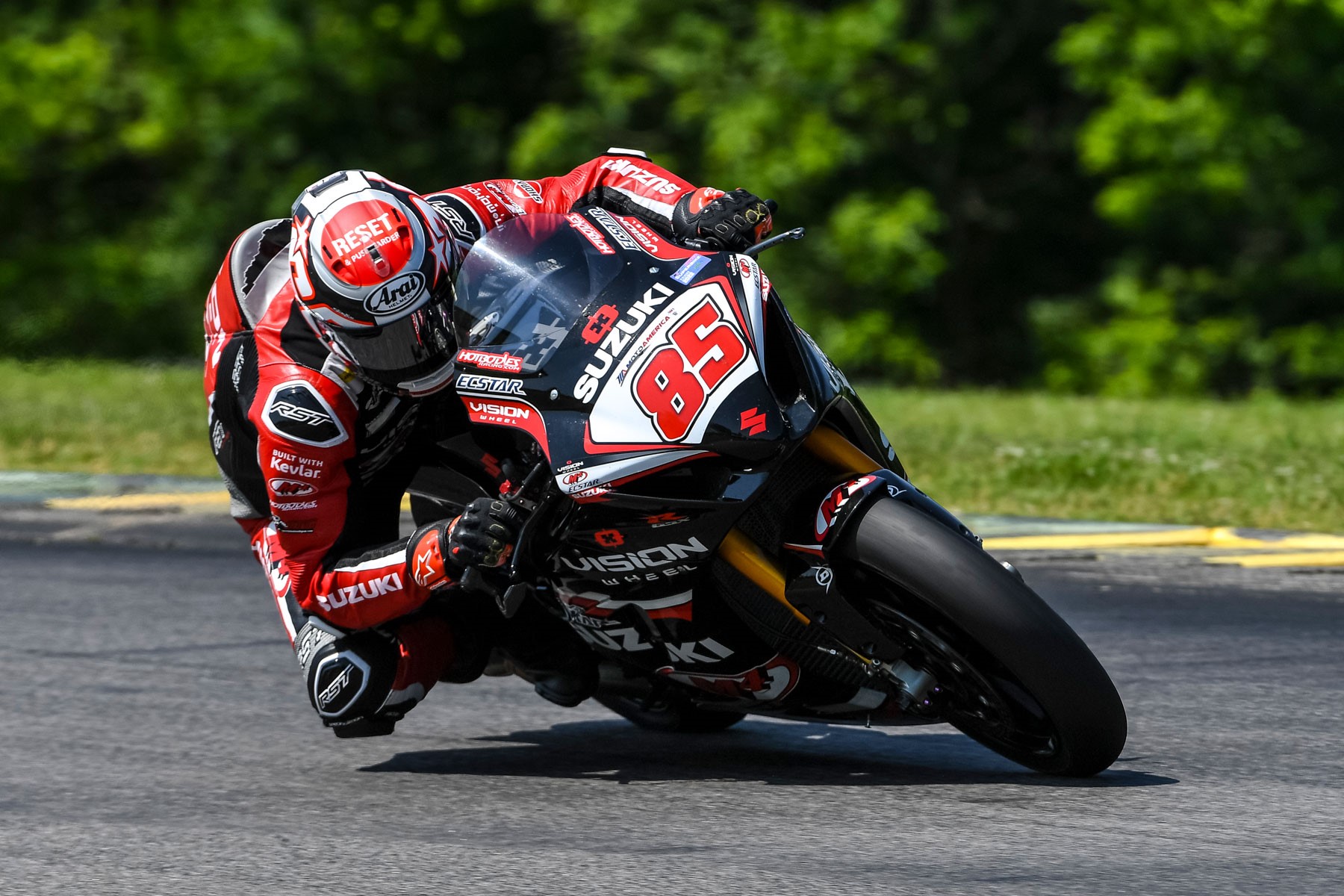 Teammate Jake Lewis registered a measured ride in sweltering conditions, ultimately earning a lonely fifth. The result was the Kentuckian’s fourth finish of sixth or better early in his Superbike return as he continues to return to top form.

Team Hammer will be back in action on Sunday at Virginia International Raceway with the aims of fulfilling its race-winning potential.