Brandon Hartranft (41) matched his career-best 450 class result with another top ten in Utah.

Brandon Hartranft and his Twisted Tea Suzuki RM-Z450 got off to a solid start in the final race of the supercross season. He rode strong inside the front group and moved past other riders in the closing laps. Hartranft climbed to eighth place in the main the time the checkered flag flew. The points earned in Utah secured him an eighth-place overall finish for the season, an impressive result for a sophomore athlete in the premier 450 class.

"Round 17 was strong for me. I really jelled with the track," said Hartranft. "It was my best qualifying all year: P.7. Going into this weekend another rider and I were battling for eighth in points. He was three points back, so my goal was to secure eighth overall in the standings. It's been such a great year for me and the team. In the main event I honestly rode my best all year. The whoops were super challenging, but it was definitely one of the better Salt Lake City tracks." 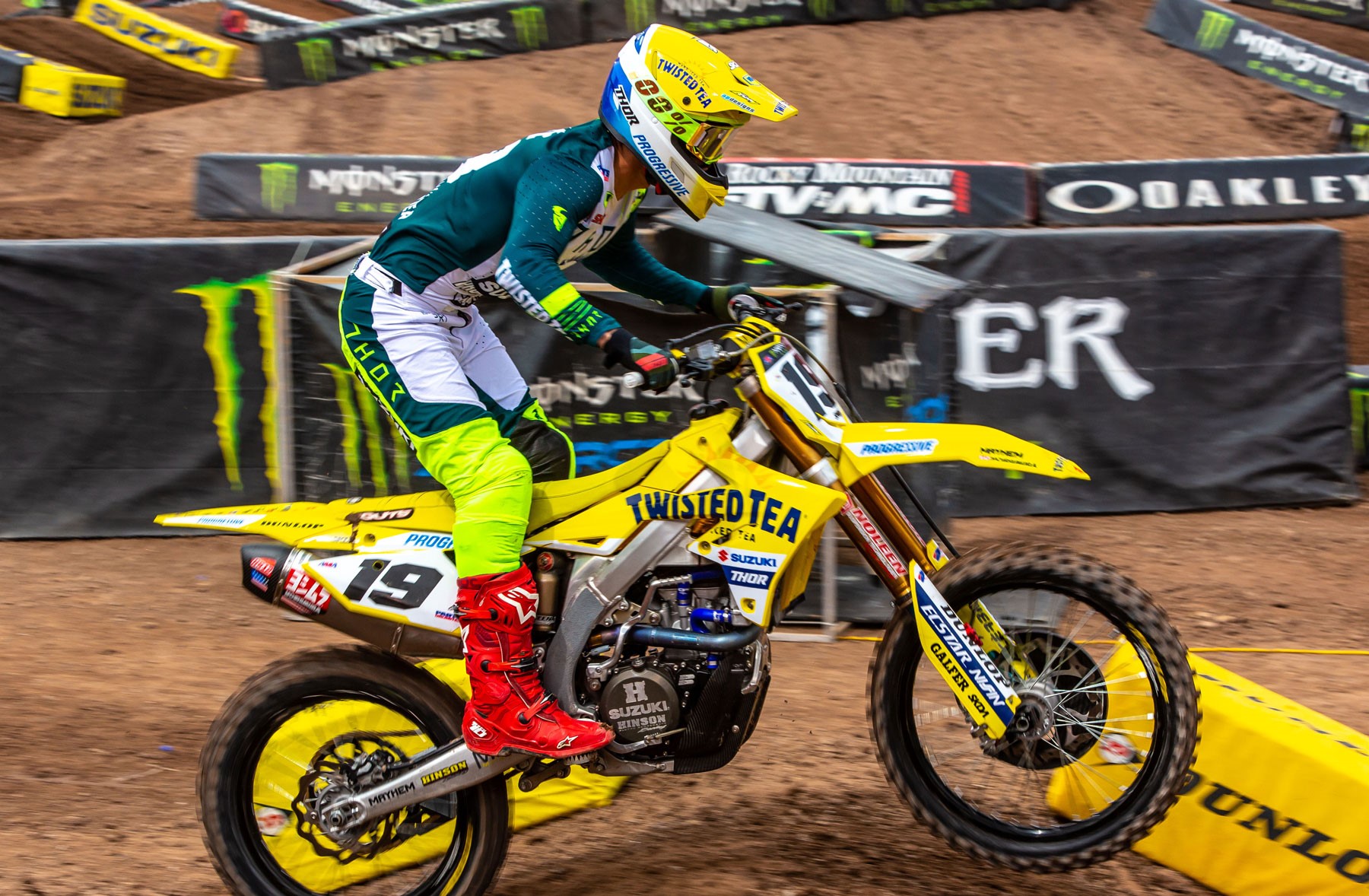 Justin Bogle (19) powered his RM-Z450 out ahead of the pack and grabbed the final holeshot of the season.

Justin Bogle laid down the power perfectly to launch his Twisted Tea Suzuki RM-Z450 out of the gate and ahead of the pack at the start of the main event in Utah. Bogle held his own up front at the high-altitude venue and finished the year with a top ten result.

“I had a good weekend in Salt Lake City. It was nice to get up front in the main event and take the last holeshot of the season.” Said Bogle, “I am looking forward to the outdoors and see what we can do.” 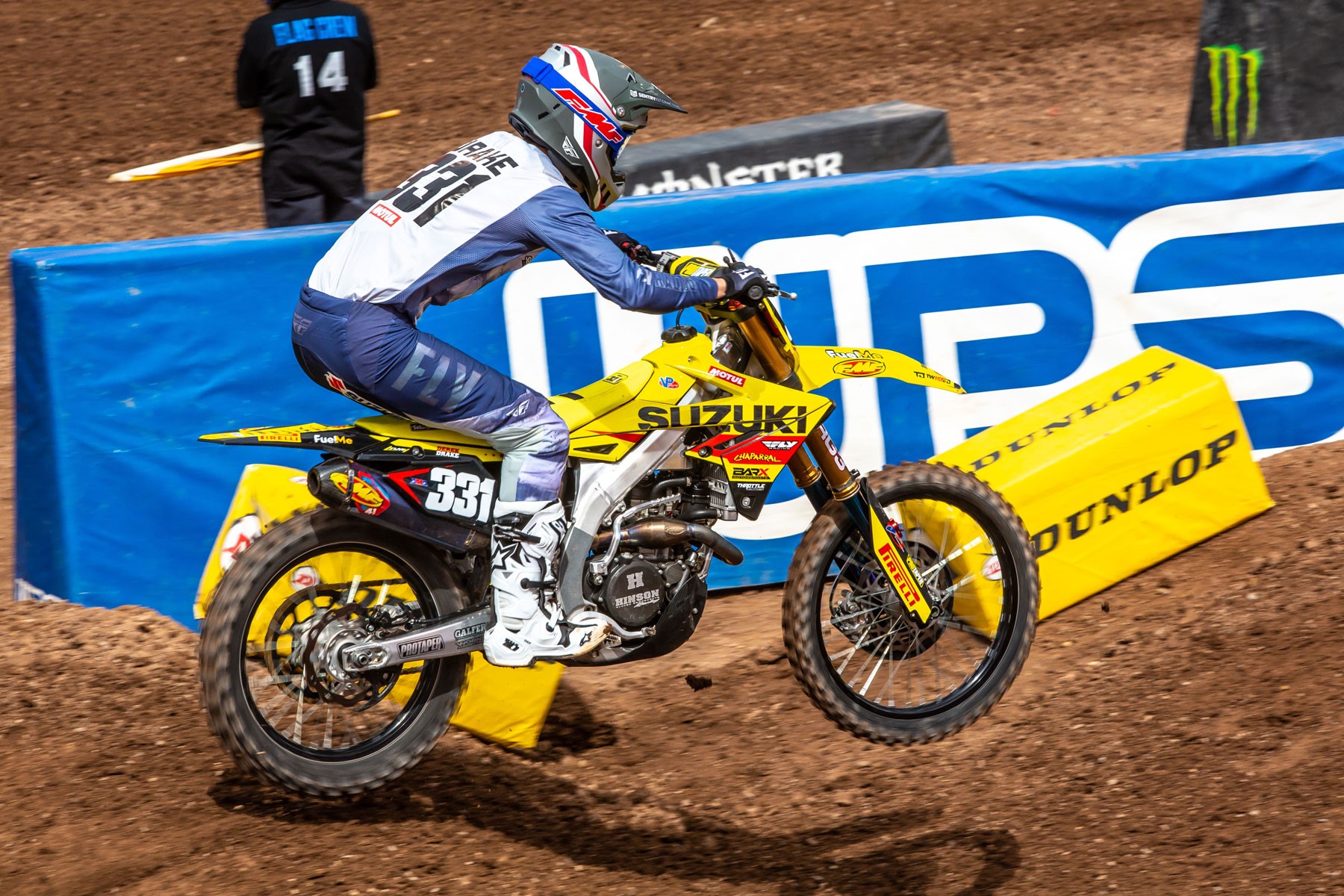 Derek Drake's (331) return to racing netted him a top ten in the 250 East Coast championship standings.

Derek Drake and his RM-Z faced the second Dave Coombs Sr. East/West Showdown of the year at the season finale. Drake had the speed on the hardpack dirt to qualify inside the top ten. In the main event a poor start put him in catch-up mode. Drake made passes and earned the points needed to put his BarX/Chaparral Suzuki RM-Z250 into the top ten in the championship's final standings.

"The last round was pretty challenging considering it was the East/West shootout. But I made it into the main through the heat." Drake said, "Unfortunately, I had a bad start in the main and could only crawl my way back up to 14th. The track was really one-lined so it was hard to make passes. But I'm very pleased to walk away with tenth in points for the season!" 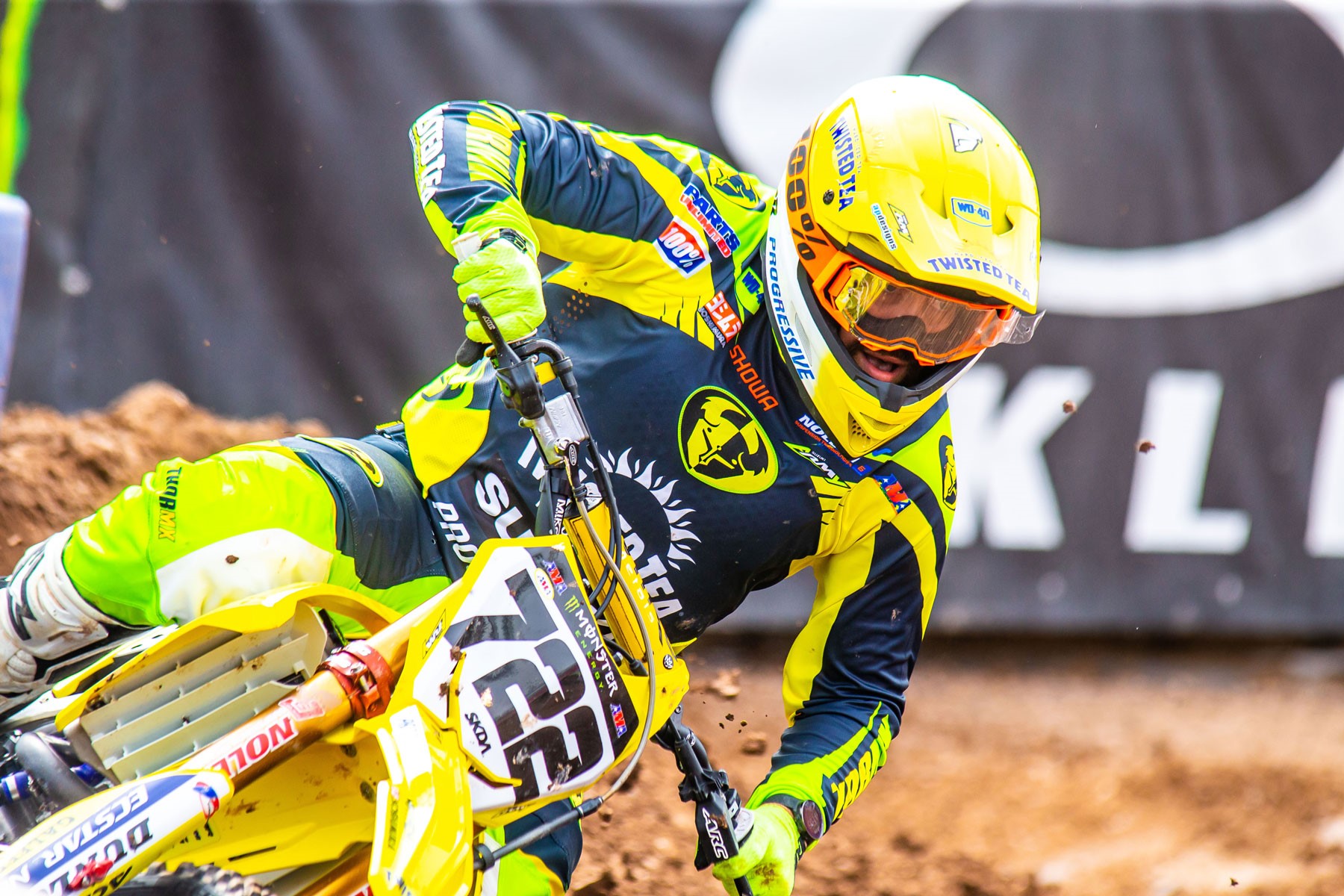 Adam Enticknap (722) gained fans and gritted out a tough final race day nursing an injury from the prior round.

"It was a really tough race with getting hurt the weekend before and popping my ribs out," Enticknap said after the race. "I was dealing with that all day. Qualifying went well. I ended up 23rd overall. Unfortunately, I didn't get the starts I needed. I just didn't make it happen. It was a tough weekend for the last round, but we did the best we could with being hurt."

"It was a great way to end the Supercross season," stated Twisted Tea/H.E.P. Motorsports/Suzuki Presented by Progressive Insurance Team Manager Dustin Pipes. "Brandon and Justin were both pushing the pace in qualifying practice, leading to great gate picks going into the night program. Justin was out front and leading early which is something we want to see more often. I am extremely proud of Brandon for having a great main event and securing eighth overall in the championship. It was a huge step for him, and he really rose to the occasion. The day went smoothly as the bike set-up was spot on from the beginning, which is really a testament to the growth the team has made throughout the season. I am looking forward to getting back to it in a few short weeks."

After a strong finish to the Monster Energy Supercross season the Suzuki riders have only a three week break to complete final preparations for the summer's 2022 AMA Pro Motocross Series. The Twisted Tea Suzuki and BarX/Chaparral Suzuki teams are up to the challenges that outdoor racing puts on both rider and machine. The opening round takes place in Southern California at the Pala I National in Pala, California on Saturday, May 28th.