BREA, CA – May 2, 2022 — The Vance & Hines/Mission Suzuki Pro Stock Motorcycle team captured its first number one qualifying spot at zMAX Dragway on the way to making its first final-round appearance of the season at the NHRA 4-Wide Nationals in Charlotte, North Carolina.

The unique four-lane track configuration of zMAX Dragway, a format making its only appearance on the Pro Stock Motorcycle schedule at this race, is a crowd-pleaser, but can be challenging for racers, whose approach to staging and view of the Christmas Tree starting light is different than at any other race on the schedule. With four bikes taking the track together rather than traditional left-right lane pairings, the first two bikes to cross the finish line move on to the next round. 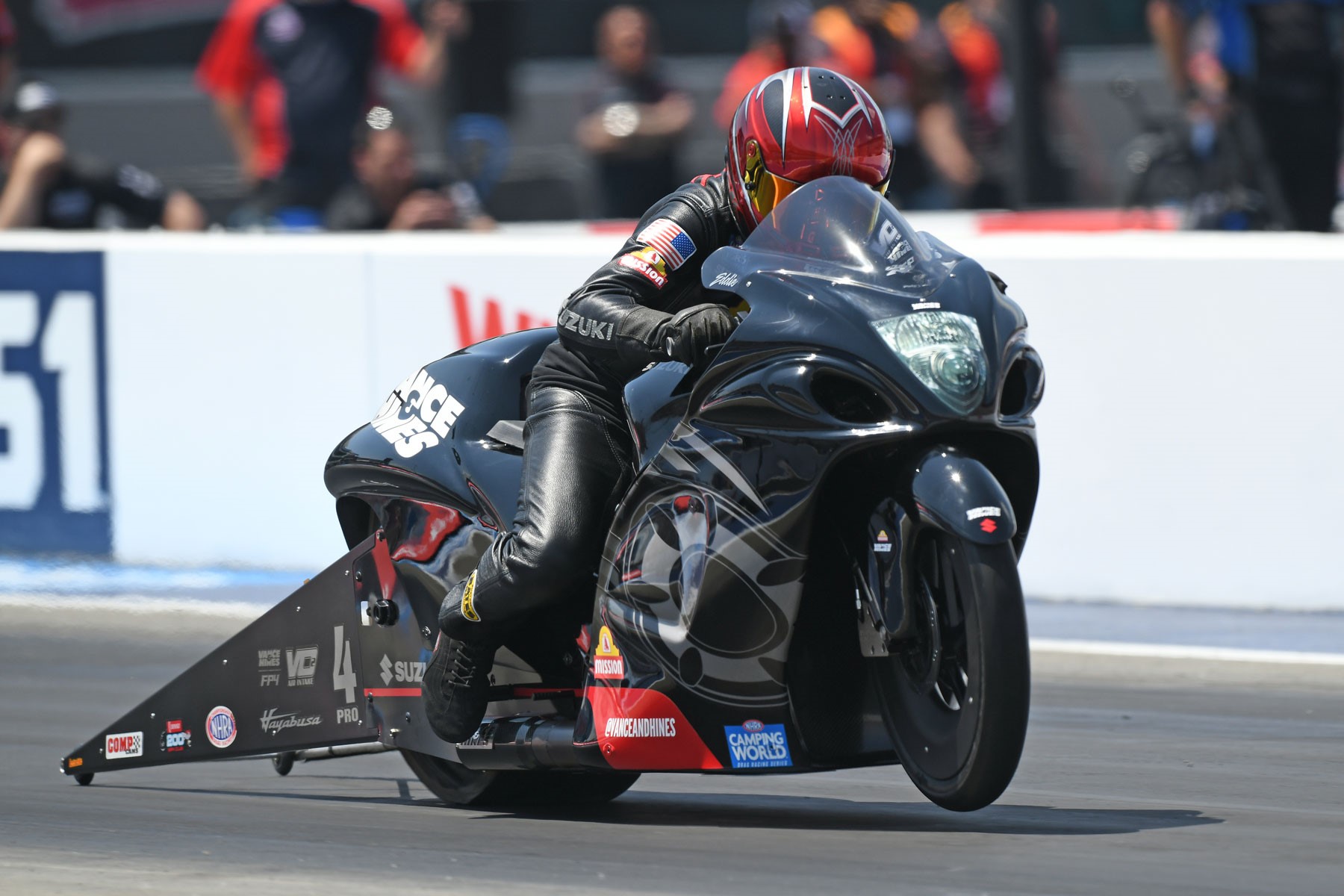 Eddie Krawiec (4) advances to the finals for the first time this season.

After qualifying his Suzuki Hayabusa in the fourth position, team rider Eddie Krawiec won his four-bike contest in the first round of eliminations with a 6.796-second/199.40 mph run, his best of the day, topping Jerry Savoie, Michael Ray, and Marc Ingwersen. In round two, he was runner-up with a 6.847/199.67 mph to Joey Gladstone, moving him into his first final-round appearance as a Suzuki rider and the first for the team. 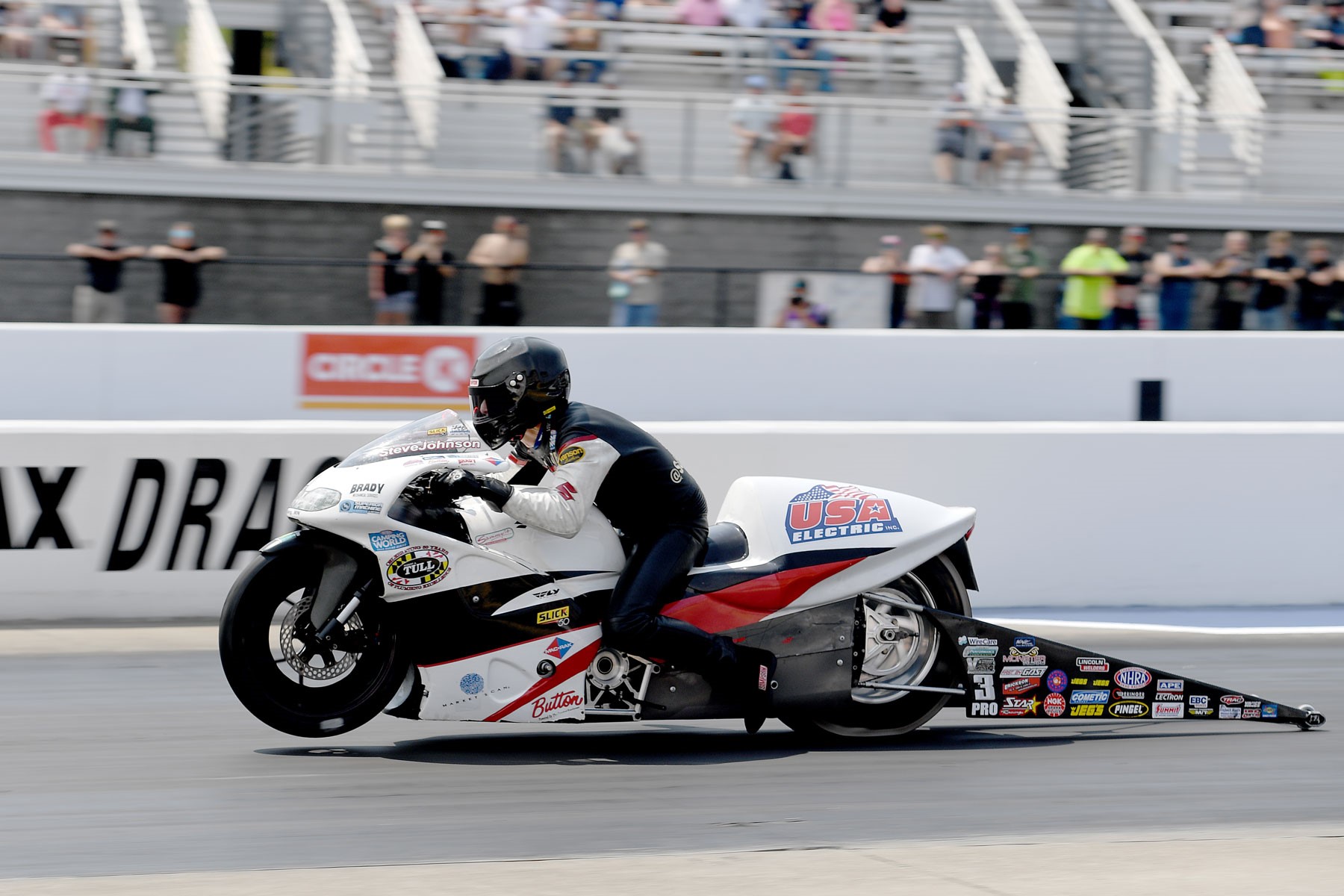 Krawiec finished third in the four-wide final with a 6.859 at 198.23 mph, not enough to overcome back-to-back event winner Steve Johnson, who raced his Suzuki to the 13th win of his career and second of the season. Suzuki congratulates Johnson for going two for two in the latest Pro Stock Motorcycle events.

“It's not the result we wanted, unfortunately,” Krawiec said. “I was a little late twisting the throttle and I came up with a 0.087-second reaction time. I was trying to do a 20 or 25, but I was late getting after it. But I've got a good motorcycle and keep putting more data into my notebook. Seeing Angelle's bike run, we know where the potential should be. We just need to find a setup on my bike to make it as happy as hers. I had a motorcycle that could go six-seventy-nine (seconds), but it can't go seventy-four yet.” 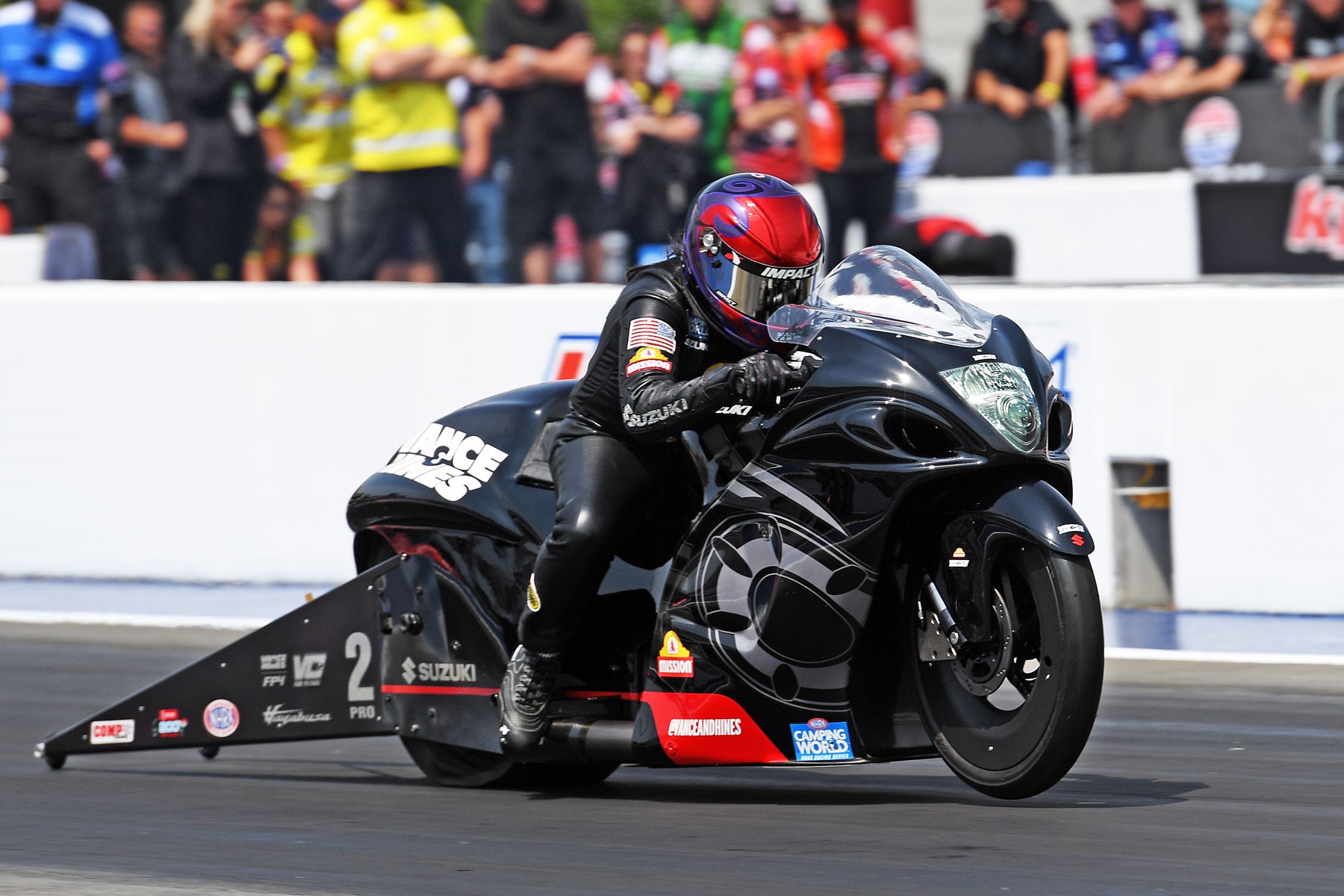 Claiming her 54th top qualifying spot, Angelle Sampey (2) has the most of any rider in the Pro Stock Motorcycle class.

On Saturday, Sampey posted the Vance & Hines/Mission Suzuki team’s first-ever number one qualifying performance, making a 6.714-second/201.16 mph pass in the third qualify round to claim the 54th top qualifying spot of her career, the most of any rider in the Pro Stock Motorcycle class and 12th most of any NHRA pro class driver. It was also her quickest career elapsed time run.

Sampey won her four-bike quad in the first round of eliminations with a 6.760-second/199.20 mph run to beat Joey Gladstone, Kelly Clontz, and Matt Smith. In the second round, her 6.801-second/201.40 mph pass was quick enough to move on, but a slow starting line reaction time prevented her from advancing to the finals. 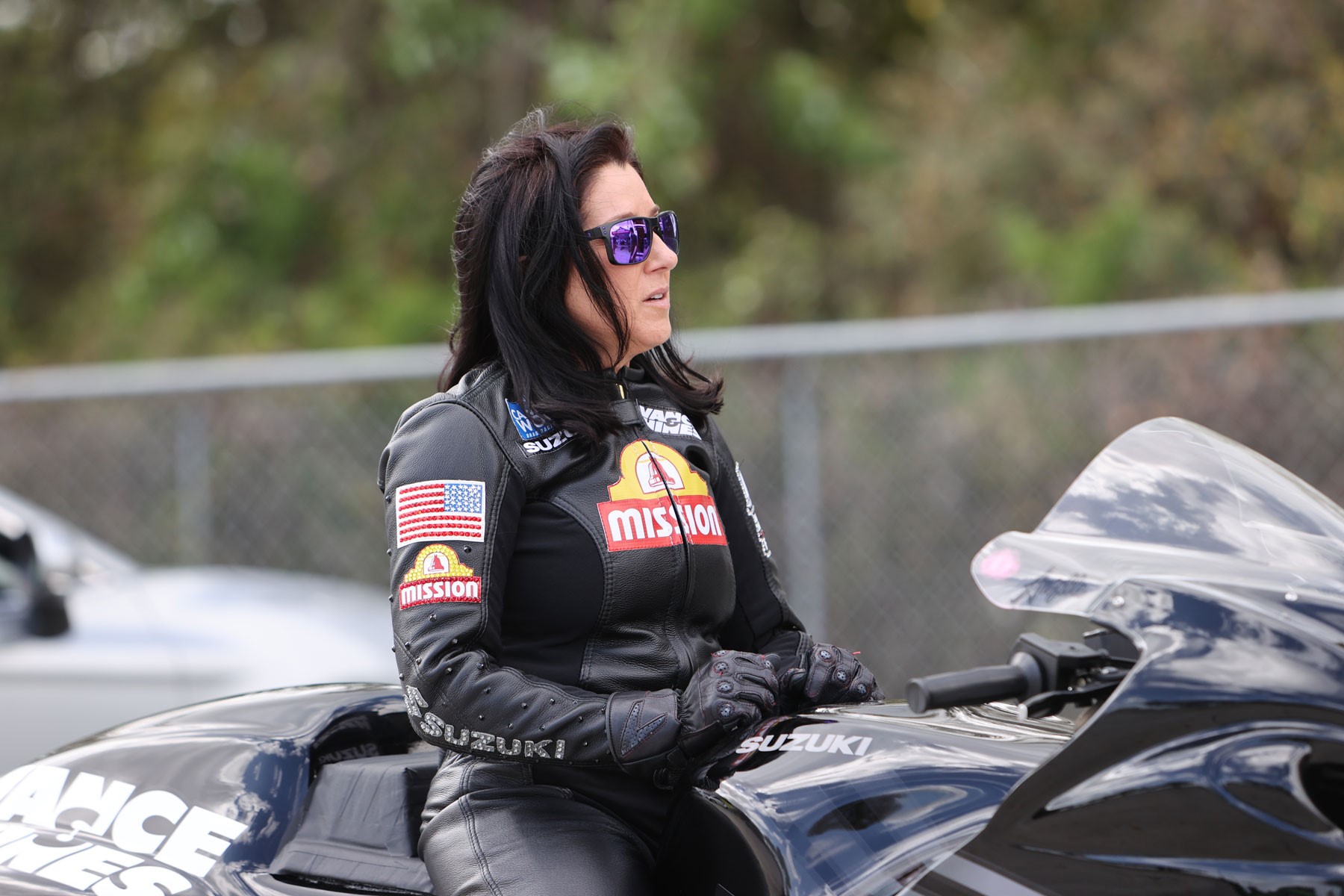 Angelle Sampey (2) looking forward to the next round at Virginia Motorsports Park.

“It was exciting in qualifying because the bike is really running well. Andrew's got the tune-up figured out,” Sampey said. “I was so cool and confident heading into the second round. Every fiber of my being believed I was going to win that round and win this race. But when the lights came on something triggered me to move my body. My feet came up on the pegs and I surged forward. It caused me to leave (the starting line) really late and upset the motorcycle. The bike lifted off the ground a little bit and started to spin the tire and it was just all over after that. It was very frustrating because it was 100 percent my fault. I have a fire lit under me now, and I can't wait to get on the plane and go to Virginia because I want to whip everybody.”

For his part, team Crew Chief Andrew Hines was pleased with the performance of the team’s bikes and historic firsts posted by the Vance & Hines/Mission Suzuki team.

“It's great to have the number one [qualifying spot] for Suzuki and it was nice for Angelle to get her career-best ET,” said Hines. “Angelle would have put up some better speeds if I had gotten the chassis sorted a little bit earlier in the weekend, but we’re still learning how some of the aerodynamic and other changes we made affect her getting down the track. Even though she spun the tire hard, the bike went perfectly straight and put a decent speed on the board. We're homing in on it and we'll be ready for Virginia in two weeks.”

The Vance & Hines/Mission Suzuki Pro Stock Motorcycle team will be back in action May 13-15 at the Virginia NHRA Nationals at Virginia Motorsports Park in North Dinwiddie, VA. For more information, visit www.NHRA.com.