BREA, Calif., May 2, 2022 — Brandon Hartranft put his Twisted Tea Suzuki Presented by Progressive Insurance Suzuki RM-Z450 deeper into the top ten in points with a strong performance in Denver at round 16 of the 2022 Monster Energy Supercross series. BarX/Chaparral Suzuki's Carson Mumford posted an LCQ win on his way to qualifying for the main in the 250 West class at Empower Field inside Mile High Stadium. Hartranft's Twisted Tea Suzuki teammates Justin Bogle and Adam Enticknap used their Suzuki RM-Z450s to battle competitors through the dry, slick track conditions at the final daytime race of the season. 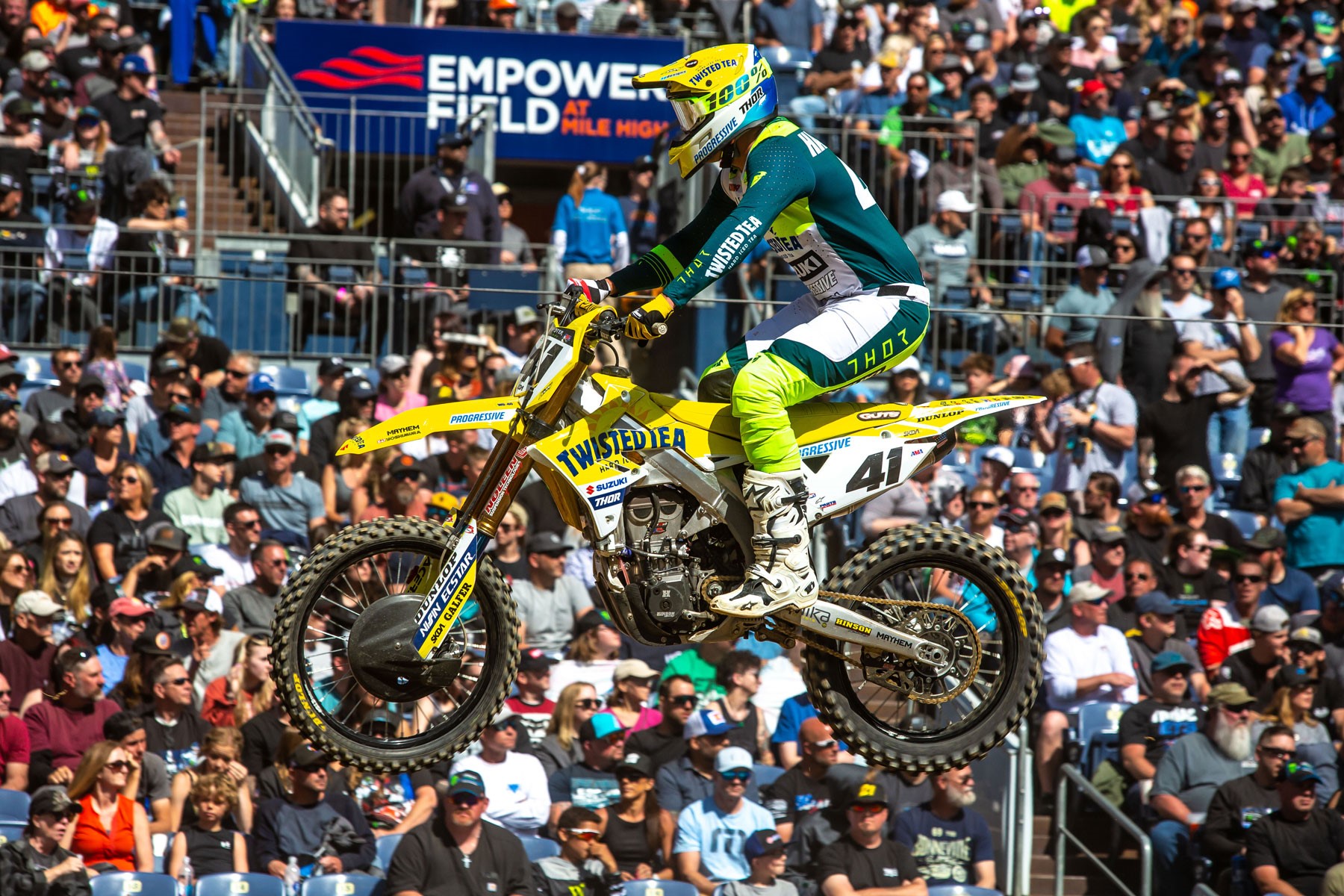 Brandon Hartranft (41) was fast all day and advanced to eighth position in the points standings.

Hartranft's steady pace aboard his Twisted Tea Suzuki RM-Z450 earned him a direct transfer to the main from his heat race. Hartranft ran into trouble early in the main with a bad jump out of the gate. He put the power down and charged forward through the pack. When the dust cleared, he'd gained another position further into the top ten in championship points.

"I felt really good qualifying, I think I was eleventh, about .5 seconds off of fifth place which I'm happy with," said Hartranft. "The heat race went smooth, but in the main event, I picked a far outside gate just to get a good rut. But then I just butchered the start. It upset me because I knew I shouldn’t be that far back. I was in about 18th and then fought my way back to eleventh. I'm not happy about eleventh, but we'll take the positives out of the day. We're looking forward to the last round and I'll fight to hold eighth place in championship points." 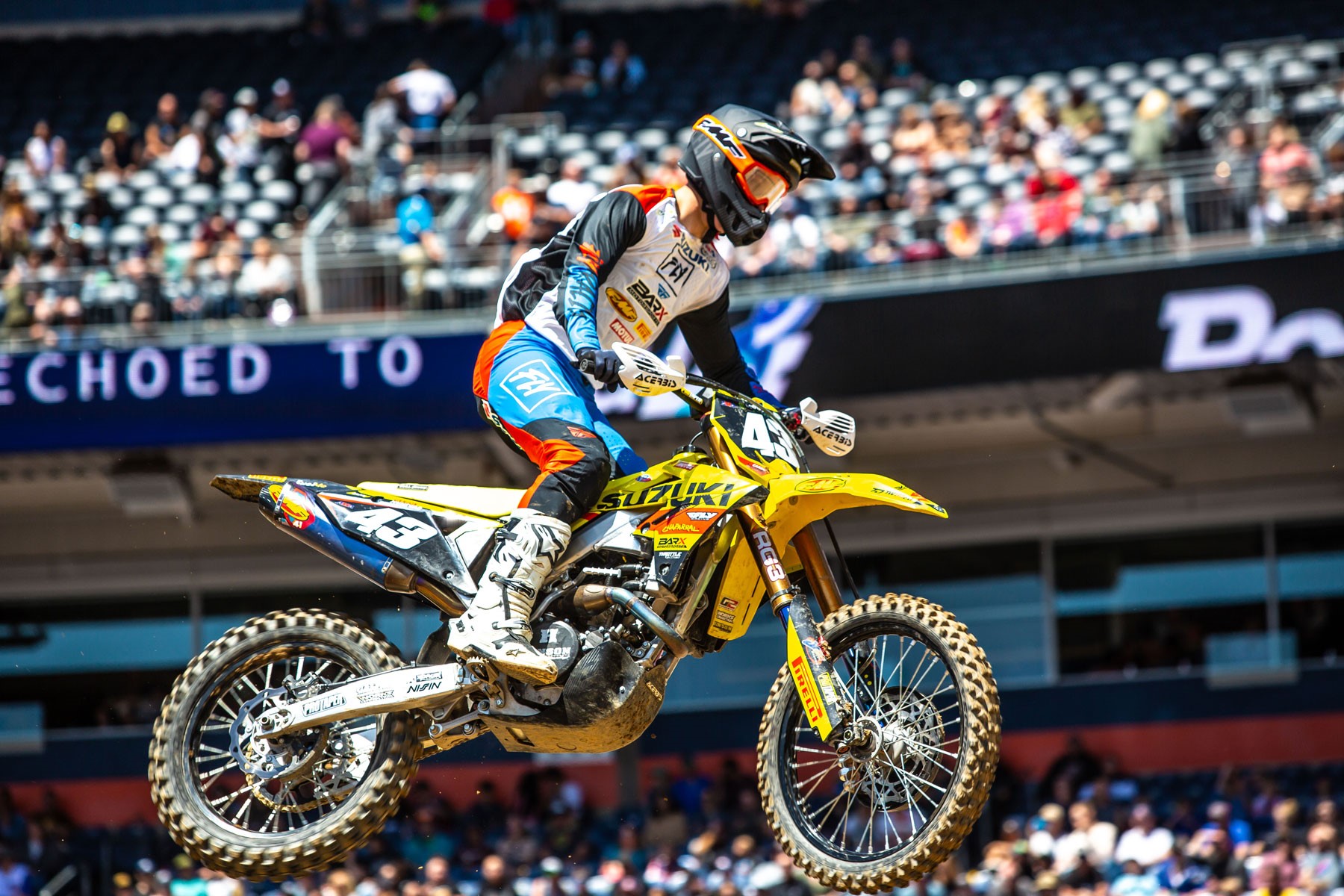 Carson Mumford (43) qualified inside the top ten at the high-altitude stadium.

In the 250 West class, BarX/Chaparral Suzuki's Carson Mumford had an issue early in the heat race that sent him to the LCQ. After a fifth-place start, Mumford put his BarX/Chaparral Suzuki RM-Z250 into second place in the early LCQ laps and took over the lead with just over two minutes left on the race clock. From there he pulled away for the win. In the main, Mumford spent the day pushing forward through the dust and other riders.

"The track was super slick all day," commented Mumford. "That was my first LCQ of the year so I'm very glad to get out of that clean and also get the win. In the main, I came from very far back and ended up 13th. It's not the best result, but I'll take it for today." 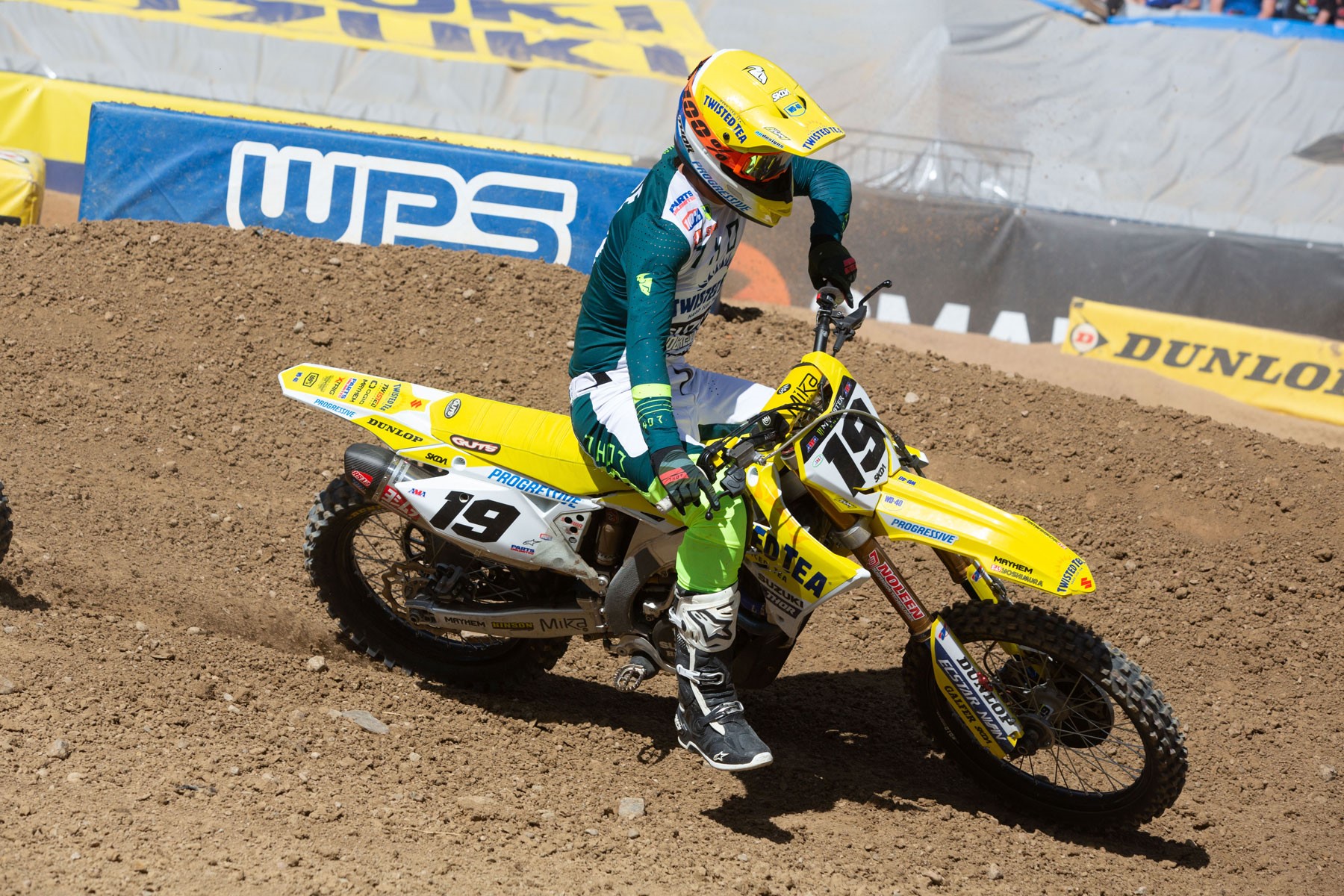 Justin Bogle and his Twisted Tea Suzuki RM-Z450 had the speed in Denver to qualify inside the top ten. A dramatic pass in his heat race was a broadcast highlight. Unfortunately, Bogle wasn't able to turn his early-heat speed into a top ten finish in the main.

"Qualifying started out pretty well, I felt comfortable and got up to speed quickly," Bogle said. "Then, it was not a great heat race. I had a fall, came together with another rider, and just barely made the main event. The main event was pretty much a wash. The silver lining here is we're healthy and will go again next weekend in Salt Lake City and wrap this season up." 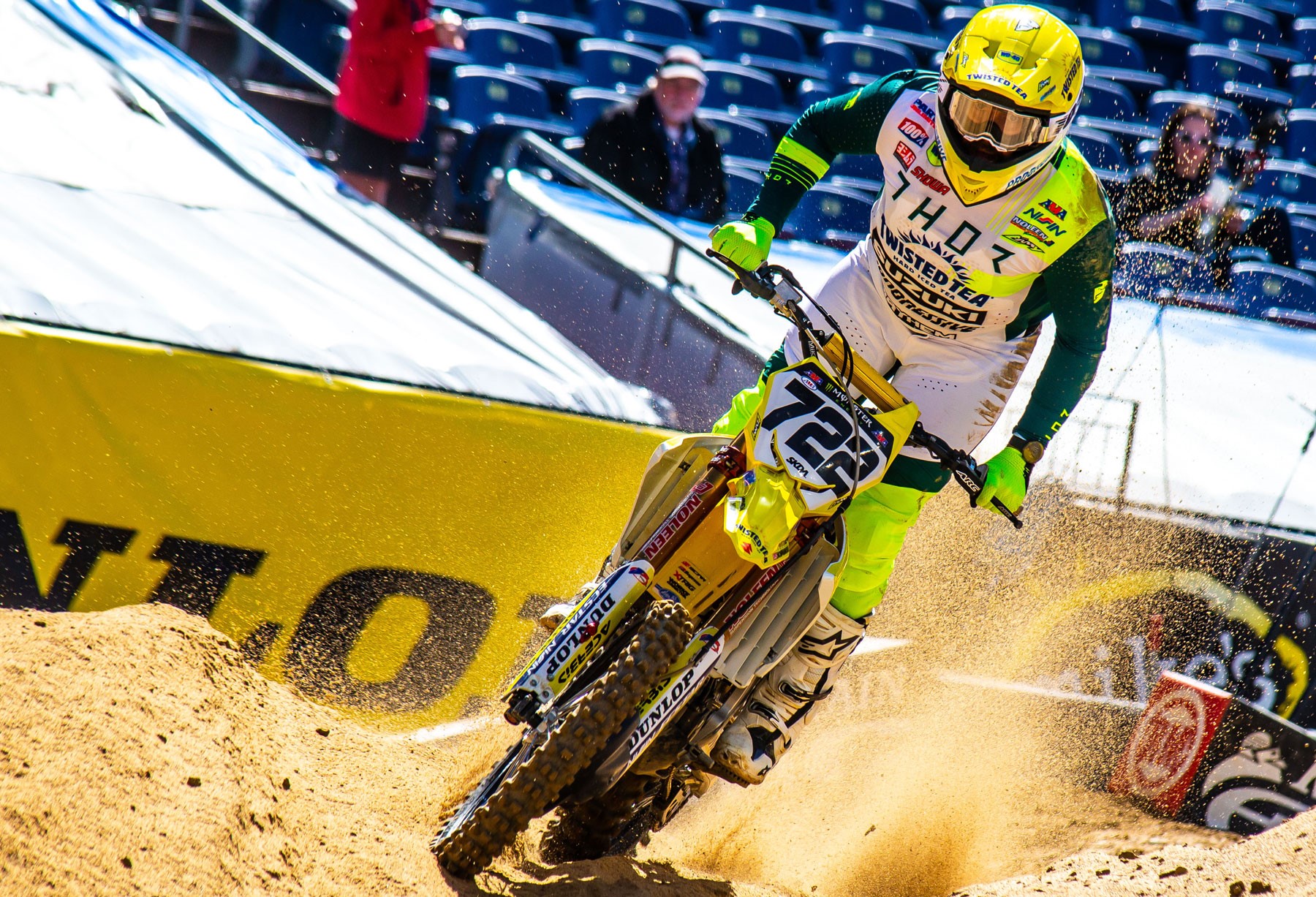 Adam Enticknap (722) was the second fastest rider in both of his qualifying sessions in Denver.

Adam Enticknap also had great speed at the start of the day, but a crash in the LCQ ended his chances of more championship points at the penultimate round of the 2022 season.

"I've been trying to work on my starts during the week and get it figured out, but I just haven't found the right technique to get out of the gate," Enticknap told the tale of his crash, "I went into the LCQ, I was around eighth and was moving forward. I made a mistake in the sand section. My rear tire slipped out from under me. The track was really dry and hardpack, but it was on me. I was trying to get to the inside and make a pass and it just slid out from under me. After I crashed somebody came up and hit me so that was the end of my night."

"We didn't ride to our potential," said Twisted Tea/H.E.P. Motorsports/Suzuki Presented by Progressive Insurance Team Manager Dustin Pipes. "Adam had three pretty big falls today which put him behind the eight ball. Justin had an issue right at the start of the main that he tried to ride through, but it just kept getting worse. He rode great all day, all through practice. He was top of the board at one point, and it was looking to be a good day for him. It's just a bummer that it ended this way. It's on the team and we'll regroup and do better for him so we can finish this season on a high note. Brandon's locked in a pretty tight points battle for eighth. We go into the final round up three points on the ninth-place rider, and that's a place we want to keep. For Brandon to be in eighth in the points is a big deal, especially considering the growth that he's shown since last year. So I’m pumped for him."

The Suzuki teams and athletes charge to the final round next weekend inside Rice-Eccles Stadium in Salt Lake City, Utah. The Twisted Tea team is assured of a top ten season finish, with all the racers fit and healthy and looking for personal bests to cap off a great season.