Team Vision Wheel M4 ECSTAR Suzuki Superbike rider Jake Lewis emerged from a chaotic opening handful of laps in third position on Saturday then spent the bulk of the contest defending the position aboard his Suzuki GSX-R1000R Superbike. The gap behind him closed perilously with around five laps to run, but Lewis responded brilliantly to the pressure. Rather than fold, he re-upped his pace to ultimately secure third at the checkered flag. 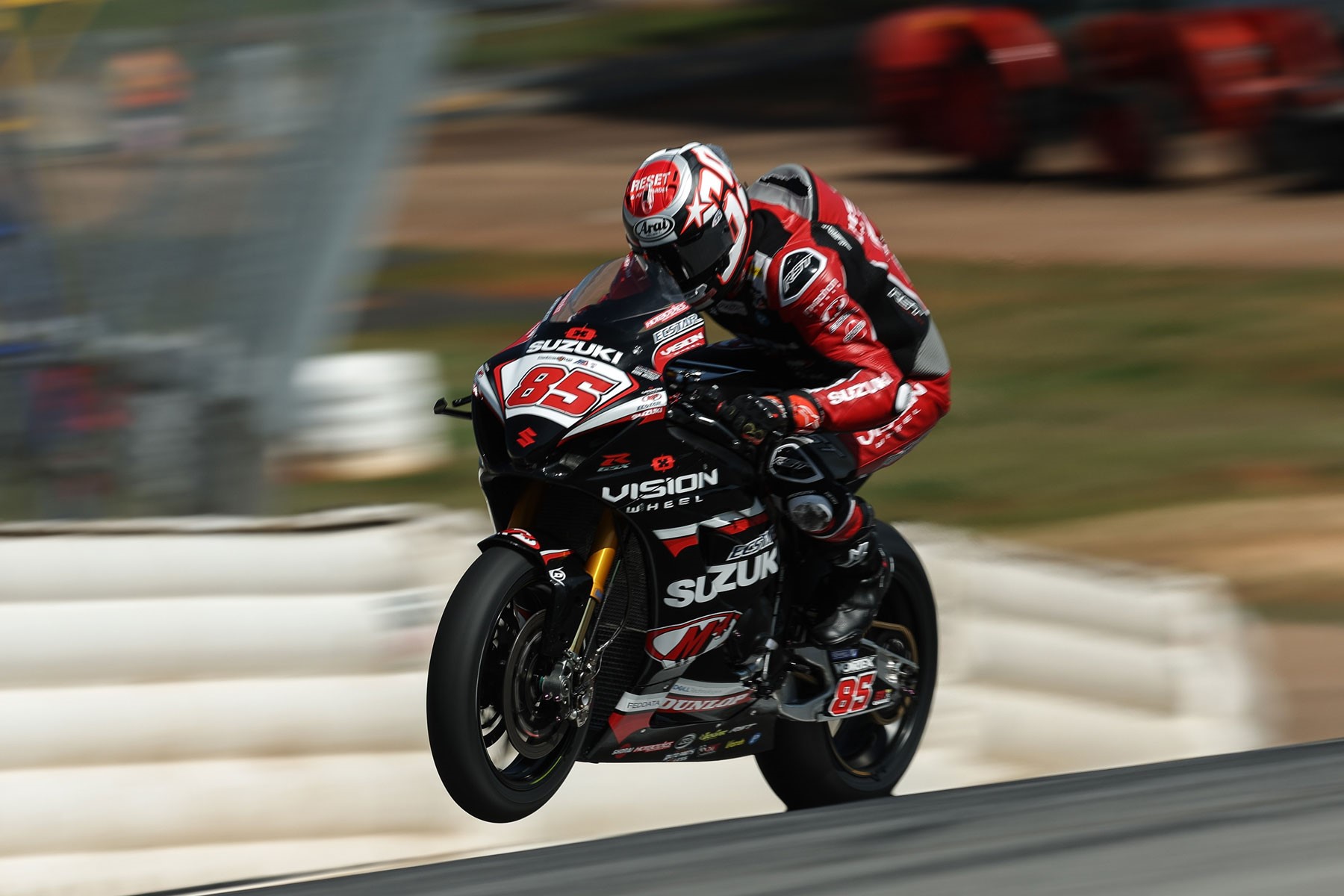 He said, “It’s always nice to be up here. It’s been since 2018 that I was last on a Superbike podium. We’re getting back up to speed with the pace of these guys. I’m getting more comfortable on the bike – this bike is a lot different than the stock bike I rode last year. I had a decent pace and I just kept pushing and pushing and managing the board. It’s obviously nice to be up here for all the Vision Wheel M4 ECSTAR Suzuki guys. They’ve been working so hard for me, and we’ll keep working away and build up speed as the year goes on.”

Lewis wasn’t so lucky in his follow-up to Saturday’s welcome return to the Superbike podium. The Kentuckian got away from the original start in fifth but was forced to line up for the restart from the back of the field after leaving pit lane just over a second late. Still, he managed to fight his way from last to seventh position before his race ended prematurely due to a mechanical issue. 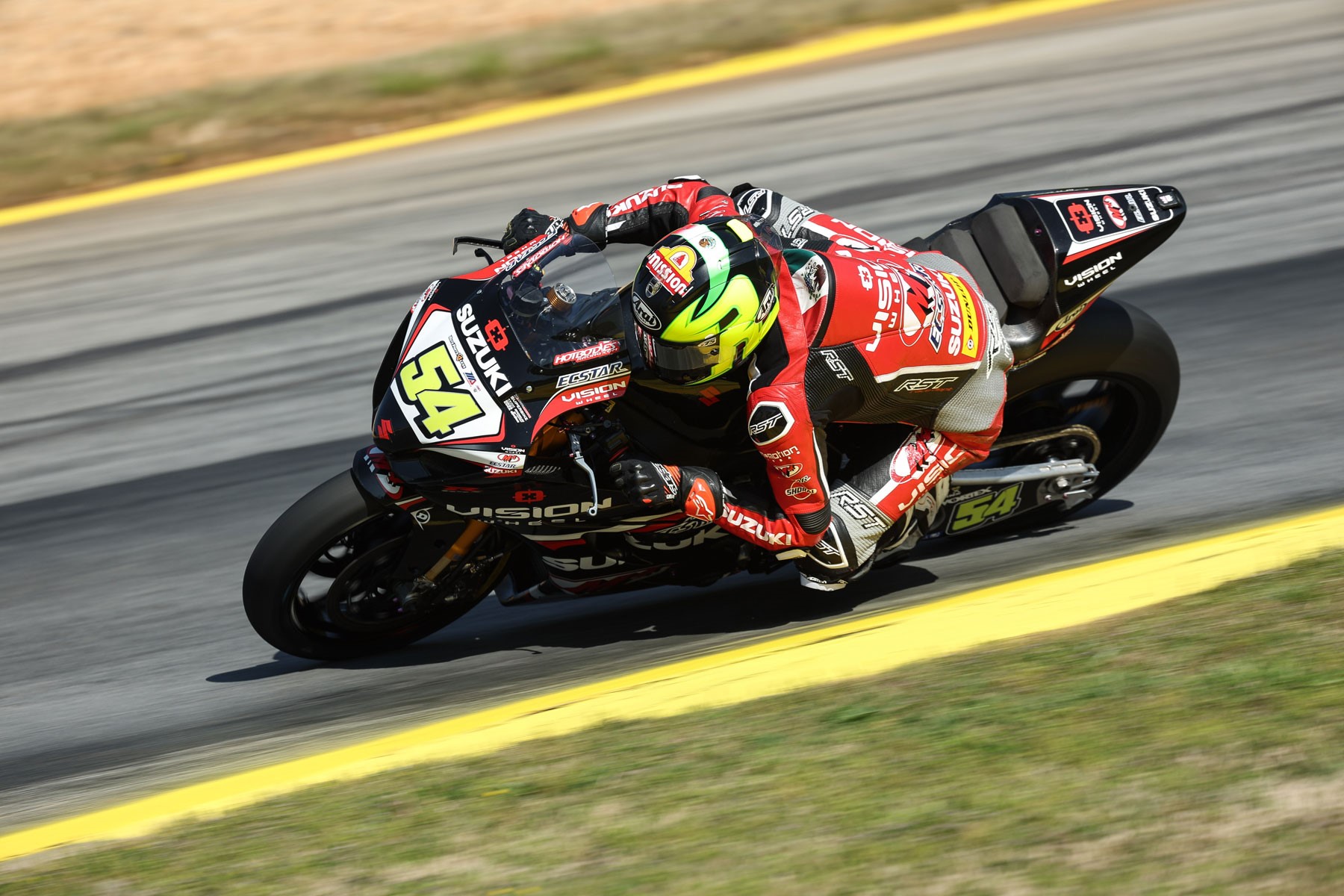 Lewis’ teammate, Richie Escalante, had an even more eventful Saturday; The class newcomer made a fast start from the second row, but ran off track early and dropped outside of the top 20 positions as a result.

The former Supersport champ charged his way forward for the remainder of the race, at last landing in fifth to give the team a double top-five result to celebrate on top of Lewis’ return to the box.

On Sunday, Escalante battled for the podium throughout the once-stopped-and-restarted affair aboard his Vision Wheel M4 ECSTAR Suzuki GSX-R1000R, coming home a close fifth after making a late push for the box.

“So far, so good,” Escalante said. “For sure, I’m learning every lap and that’s the most important thing. Two top fives are good for the championship. I need to learn more to understand the big bike better, but I’m super happy with the Vision Wheel M4 ECSTAR Suzuki team and my crew. I want to continue to fight for the podium, so we’ll keep working as we get ready for some of my favorite tracks.” 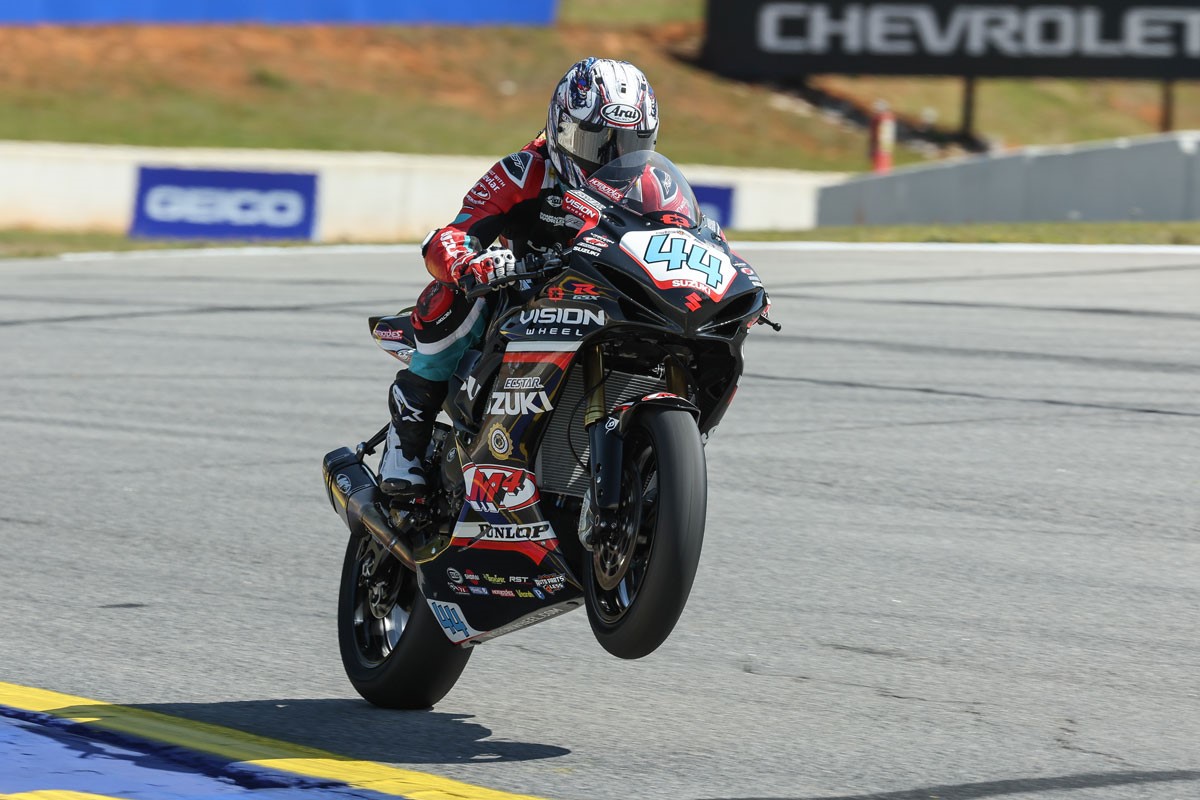 Vision Wheel M4 ECSTAR Suzuki pilot Sam Lochoff (44) finishes with a pair of podiums for Race 1 and 2 in the Supersport class.

Lochoff took maximum advantage of the second opportunity to get a strong start, jumping out second off the line and never looking back from there.

The South African said, “My Vision Wheel M4 ECSTAR Suzuki team spent the last two days working on the bike. We came here with a bunch of unknowns, and they did everything possible to put us in this position. The 750 is awesome. We’re going to keep working and we’re going to get there. I’m excited.”

On Sunday, Lochoff again demonstrated the speed to battle for wins aboard the new Vision Wheel M4 ECSTAR Suzuki GSX-R750. The South African battled his way up from the second row to quickly seize control of second and then made serious inroads on the race leader.

Lochoff’s charge was halted when a mishap through the esses cost him a couple seconds, but he kept his head, regrouped, and powered his way to a second runner-up finish this weekend.

After getting his race weekend on the GSX-R750 under his belt, Lochoff came away impressed and excited about its potential. He said, “I’m taking nothing but positives from the weekend. I’m extremely happy with the bike. We struggled with it a little bit in the first session, but we’ve been making constant progress.

“I want to thank Vision Wheel M4 ECSTAR Suzuki powered by Team Hammer. They’ve been working day and night to get this bike sorted. Last year, we finished third in the championship and so far, we haven’t finished worse than second, so I can’t wait to see how this season continues.” 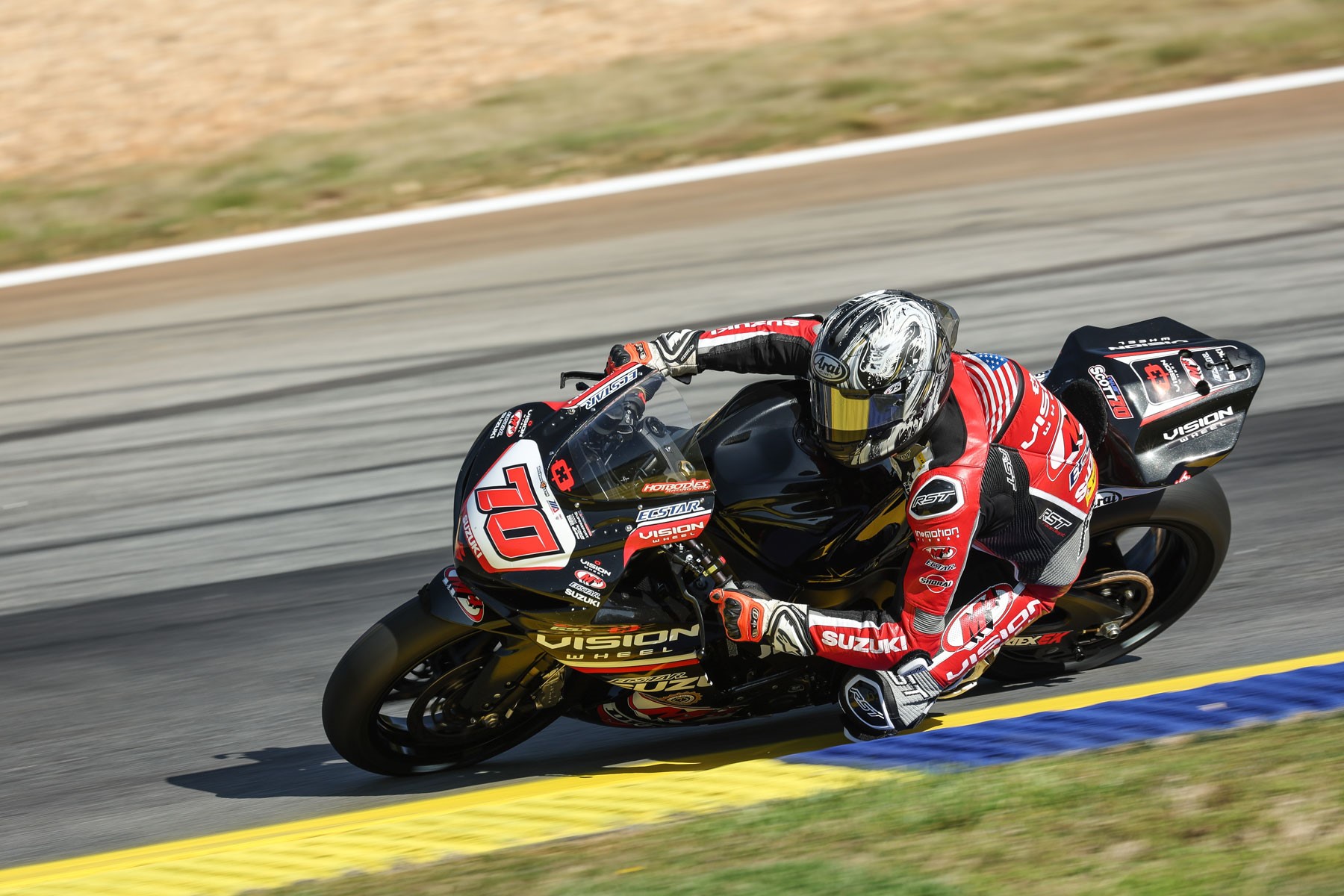 After a tough Race 1, Tyler Scott (70) finished in the top five in Race 2 on his Vision Wheel M4 Suzuki debut.

Lochoff’s 16-year-old rookie Vision Wheel M4 ECSTAR Suzuki teammate, Tyler Scott, after qualifying in fourth position, got away even better, but a chain reaction when another rider caused Scott to crash on the race’s second lap, bringing out a red flag.

Scott explained, “A rider in front of me had a bike issue, and l had to adjust my line and just got pinched off. Bad place at a bad time. On the bright side, the bike felt great.”

For Race 2, Tyler Scott demonstrated his mammoth potential, and this time earned the checkered flag. The Vision Wheel M4 ECSTAR Suzuki rookie charged his way up to fourth and had third in his sights prior to a short off-track excursion. Like Lochoff, Scott managed the drama well and ultimately snared a top-five result in his Team Hammer debut. 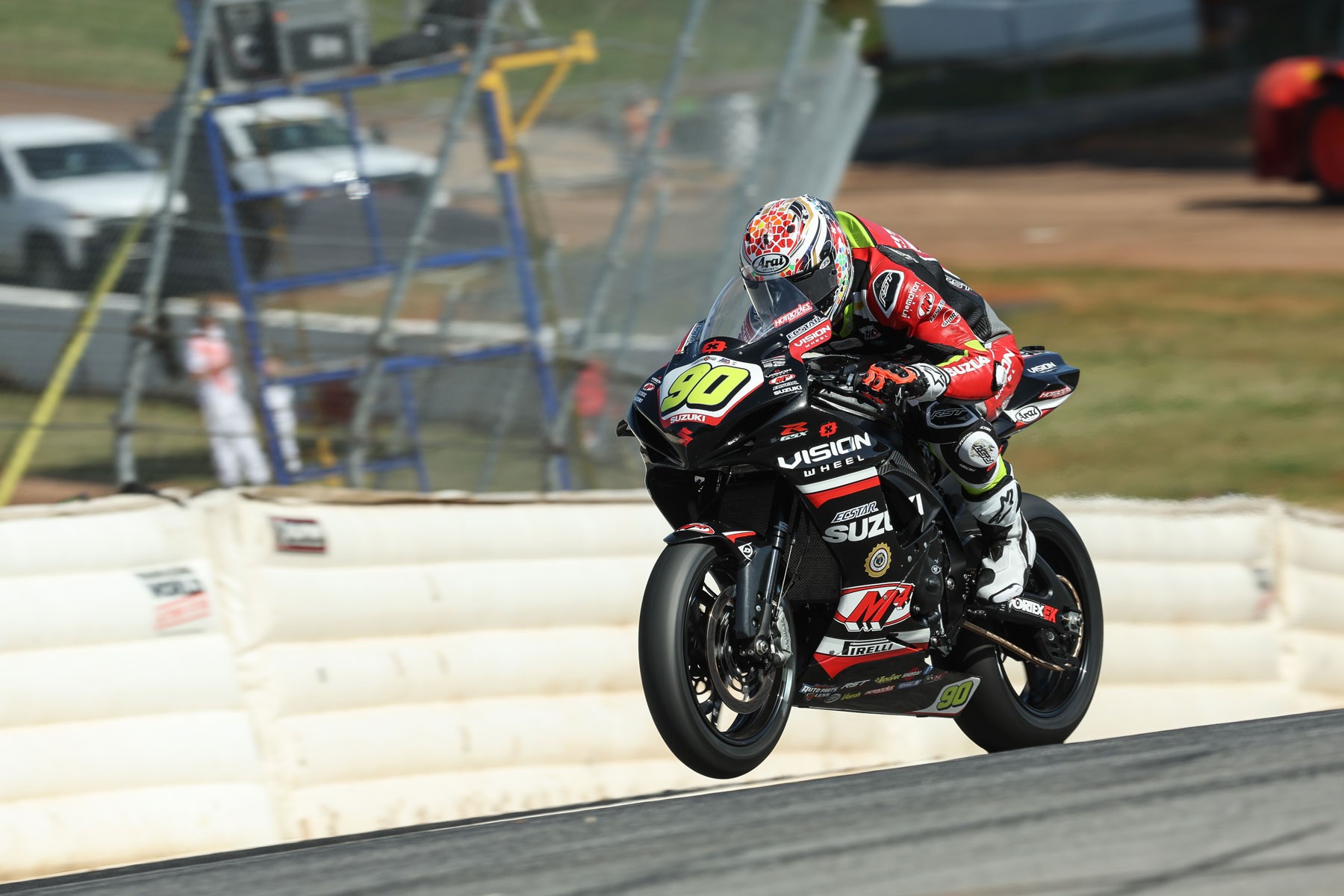 Liam Grant collected points on his Vision Wheel M4 ECSTAR Suzuki debut with a 14th in Race 1 and picking up 12th in the rematch of Race 2.

Team Hammer will return to action in just under a month, as the ‘22 MotoAmerica slate resumes at Virginia International Raceway, in Alton, Virginia, on May 20-22.