BREA, Calif., April 25, 2022 — The Suzuki teams completed the east coast swing of the 2022 Monster Energy Supercross series. Twisted Tea Suzuki Presented by Progressive Insurance's Brandon Hartranft delivered another strong performance aboard his Suzuki RM-Z450 and advanced in the championship standings. His Twisted Tea Suzuki teammates Justin Bogle and Adam Enticknap continued to show speed with their Suzuki RM-Z450’s on the technical and rocky Massachusetts soil. In the penultimate round of the 250 East series, BarX/Chaparral Suzuki's Derek Drake held strong with another solid ride on his Suzuki RM-Z250 to remain in the top ten in points. 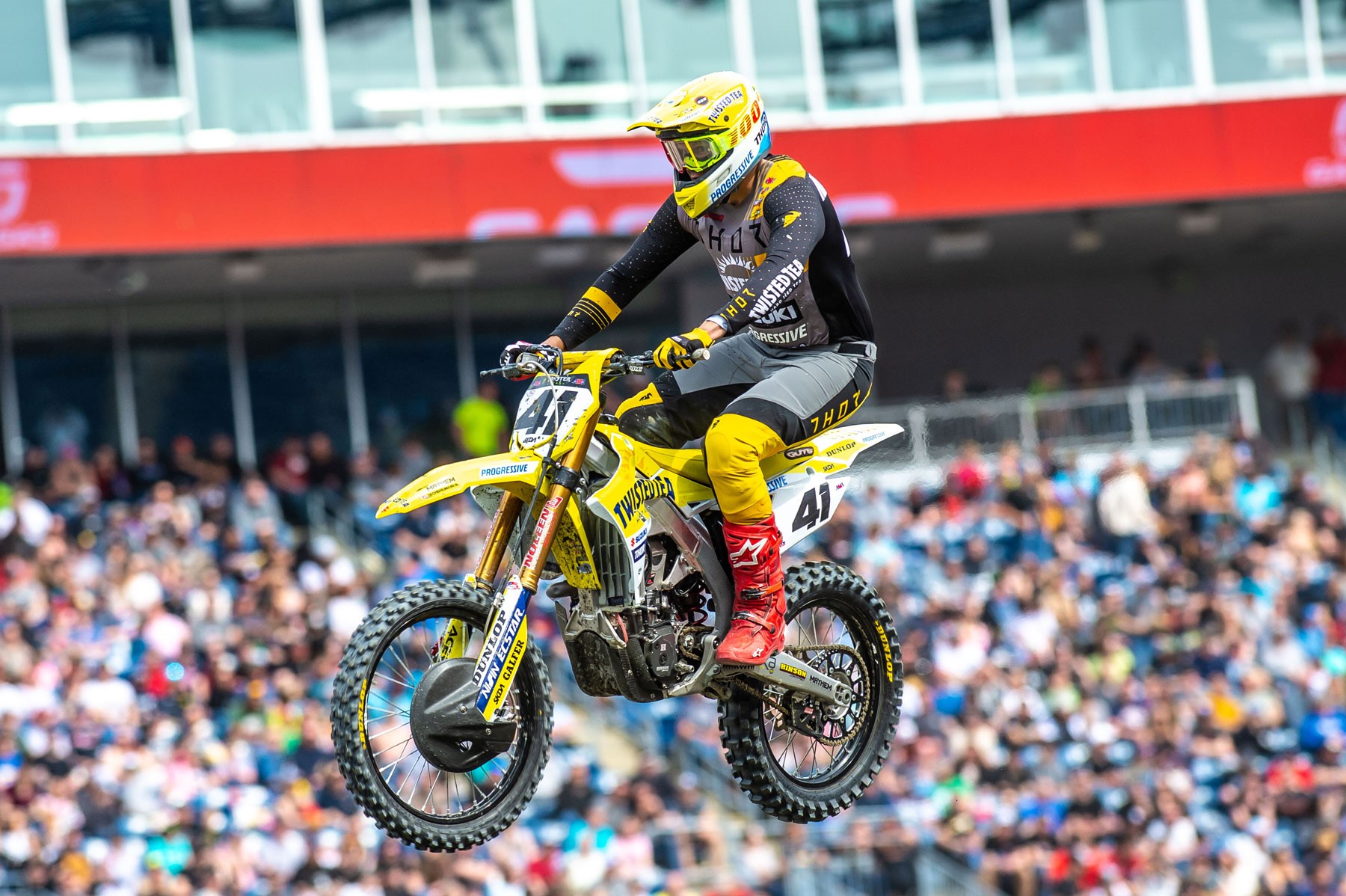 Brandon Hartranft (41) gained enough points at Round 15 in Foxborough to advance deeper into the top ten in the championship hunt.

A top five finish in his heat race put Brandon Hartranft in position for another likely top ten finish in the main event with his Twisted Tea Suzuki RM-Z450. Unfortunately, a first lap incident put him in a catch-up position. From there he battled forward throughout the 20-minute plus one lap main event.

"It was a pretty smooth day for me. I qualified tenth overall." Hartranft described the conditions and his racing, "The track was pretty gnarly, it was like sawdust out there. The dirt kept deteriorating throughout the day. It was especially bad on the jump faces. In the main event I had a great start and then going into the right hander another rider just didn't turn. He pushed me off the track. I was off the track for two straightaways before I could safely re-enter. I went from fifth on the start to way back. I rode a solid main, not the best and not the worst, and I ended up eleventh overall. So thank you to the team for believing in me and working hard and I'm going to do the same back." 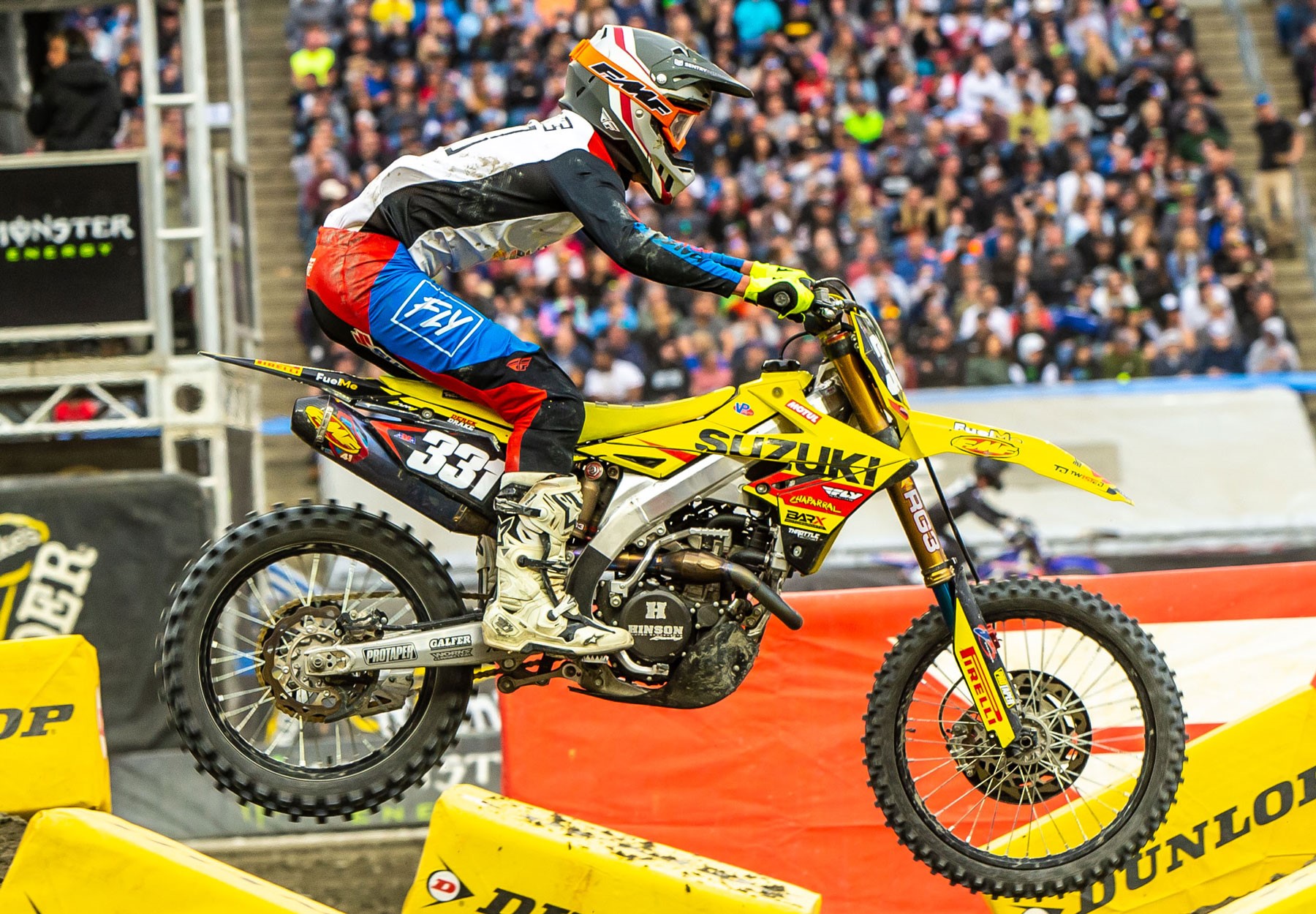 Derek Drake (331) put in a lot of passes to hold onto his top ten spot in the season points standings.

In the final standard-format 250 East race, Derek Drake got off to a rough start when a rider cut across the track and created a first turn pile up in Drake's heat race. He rebounded with a holeshot in the LCQ, using his BarX/Chaparral Suzuki RM-Z250's torque on the start straight to gain a direct transfer to the main. In the main event Drake was pushed wide in the first corner but passed ten riders to earn 11 championship points heading into the final 250 East race in two weeks.

"Today was tough," Drake explained. "I struggled with pace all day. I'm happy to come out healthy and ready for the next one in Salt Lake City." 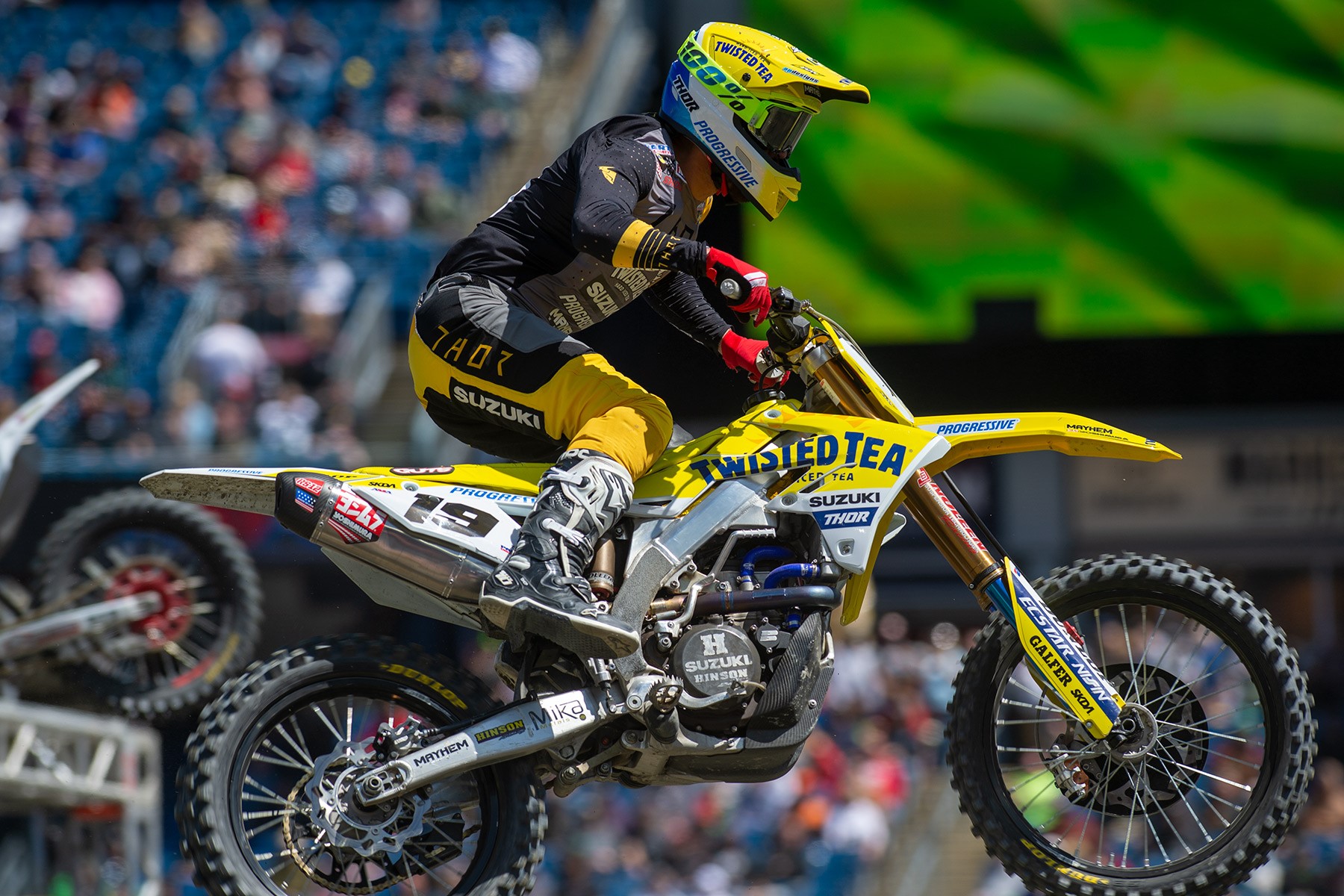 Justin Bogle (19) battled inside the top ten for most of the main event in Gillette Stadium.

Justin Bogle turned a direct transfer in his heat race to a top-ten track position in the main event. After battling inside the top ten for the majority of the race, a late issue forced the Twisted Tea Suzuki athlete to withdraw in the closing laps.

"It was not the best weekend in Foxborough," Bogle summarized. "I'm glad to get out of here healthy so I can finish out the next few weeks strong." 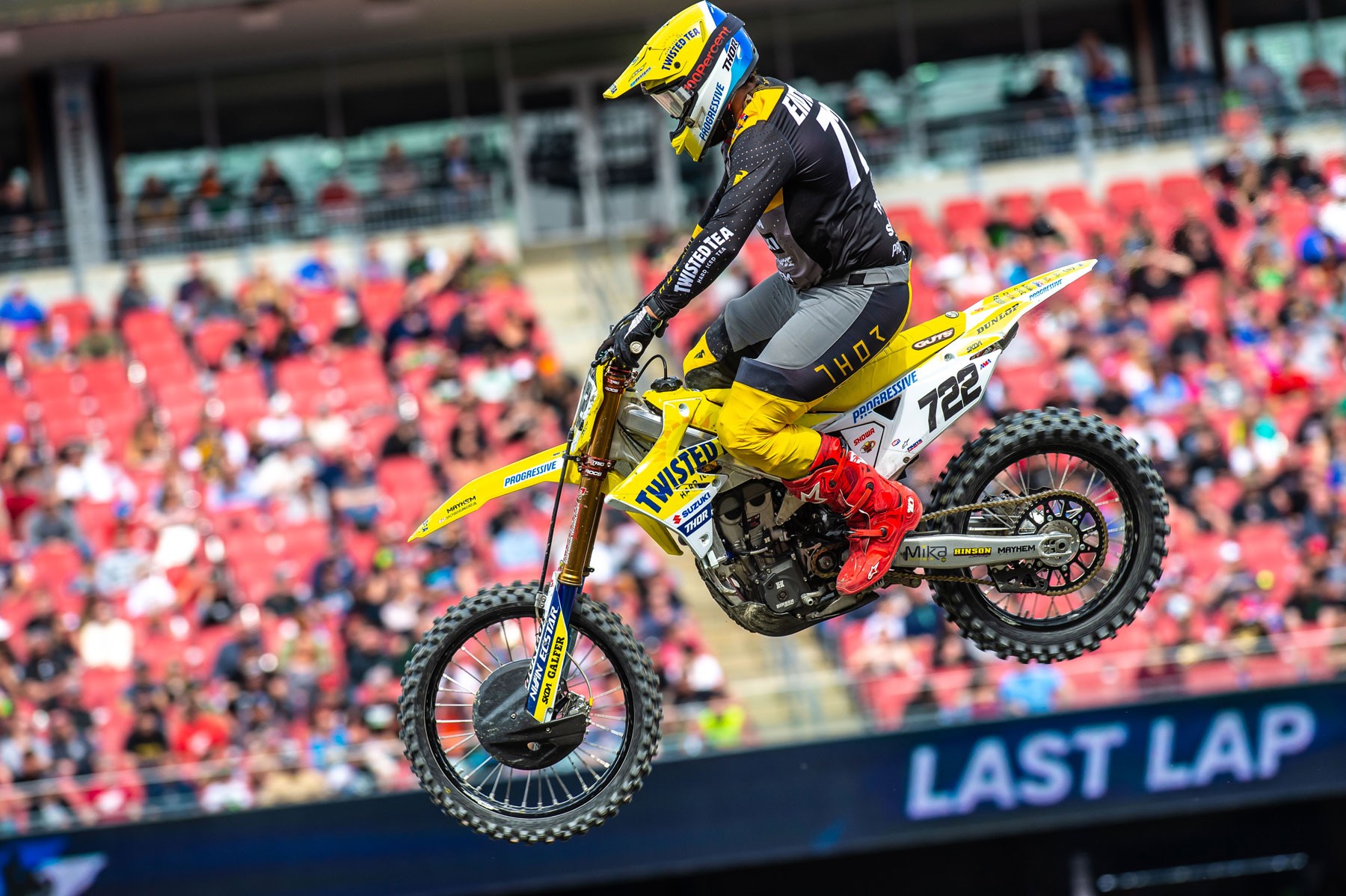 Getting more time with the broadcast crew, the popular Adam Enticknap of the Twisted Tea Suzuki team was asked to explain the challenging whoops section during the pre-race "Race Day Live" broadcast. Unfortunately, his racing experience couldn't overcome a tough day on the track as Enticknap missed a qualification into the main event by two positions.

"It's always a unique experience racing in Gillette Stadium," said Dustin Pipes, the Team Manager for Twisted Tea/H.E.P. Motorsports/Suzuki Presented by Progressive Insurance. "It was even better with the team hosting corporate staff from our partner, Twisted Tea. It was great to have so many of their team turn out and experience supercross. In terms of on the track, it wasn’t our best showing. We struggled most of the day, but we have a solid plan to put this race behind us going forward. Brandon is up to ninth in points and that’s a great accomplishment going into the final rounds."

The series marches to Denver, Colorado next Saturday where it will deliver Round 16 and the final standard-schedule 250 West event. After that, the Suzuki athletes, and teams head to the season finale in Salt Lake City, which includes the final East/West 250 class showdown. Check broadcast times for the early race schedules.