Speed and Toughness on Display with Suzuki Supercross Athletes 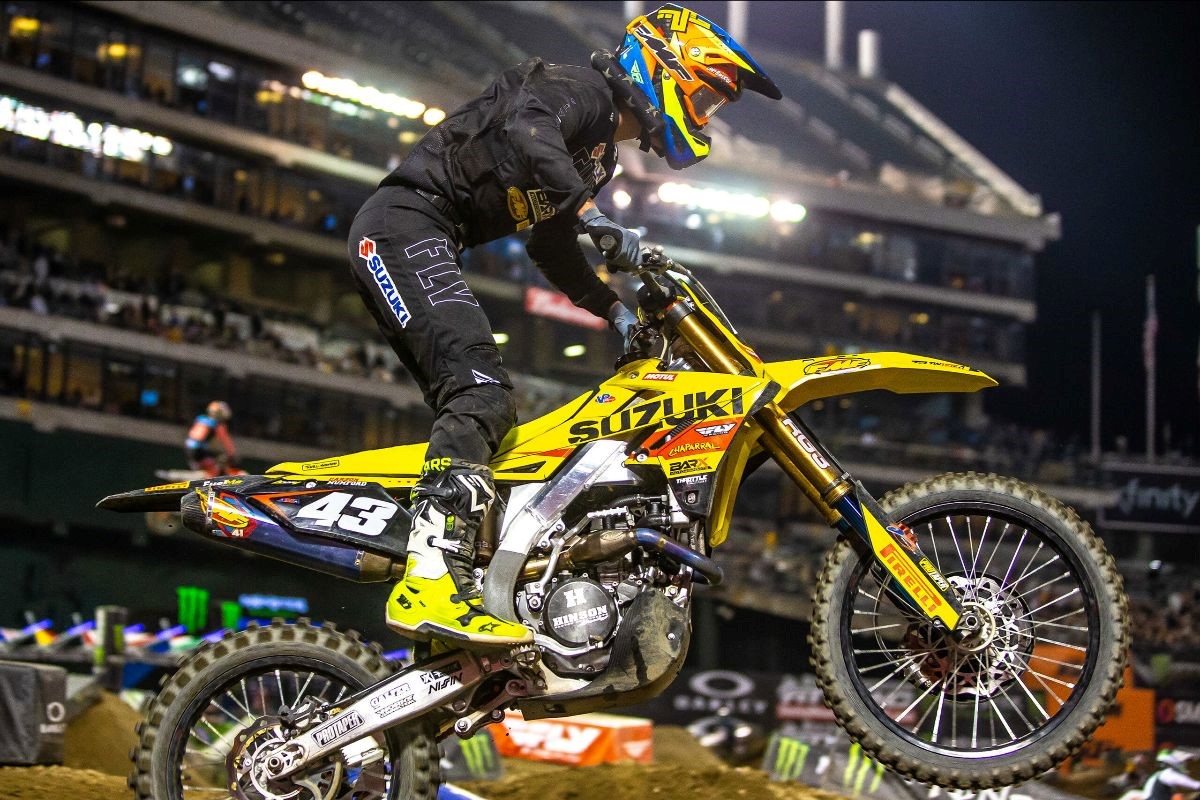 Carson Mumford (43) put in strong laps in the main event until the checkered flag.

Carson Mumford paired confidence with Suzuki RM-Z250 horsepower to jump into the top three in heat one's start. He fought up front and transferred directly into the main with a good gate pick. He was inside the top three entering the first corner of the main event. Unfortunately, an incident in the whoops midway through the race bounced him off the track and onto the ground. Mumford rejoined the race in 22nd place and made his way through the field to salvage a handful of championship points.

"The day was a struggle for me. It was my first-time racing in Oakland." Mumford said. "I had a big crash in the first practice but was okay and ended up getting sixth in my heat race. In the main I was in eighth and crashed. I had to pull into the mechanics' area to get my throttle fixed before going back out, so only caught back up to fourteenth." 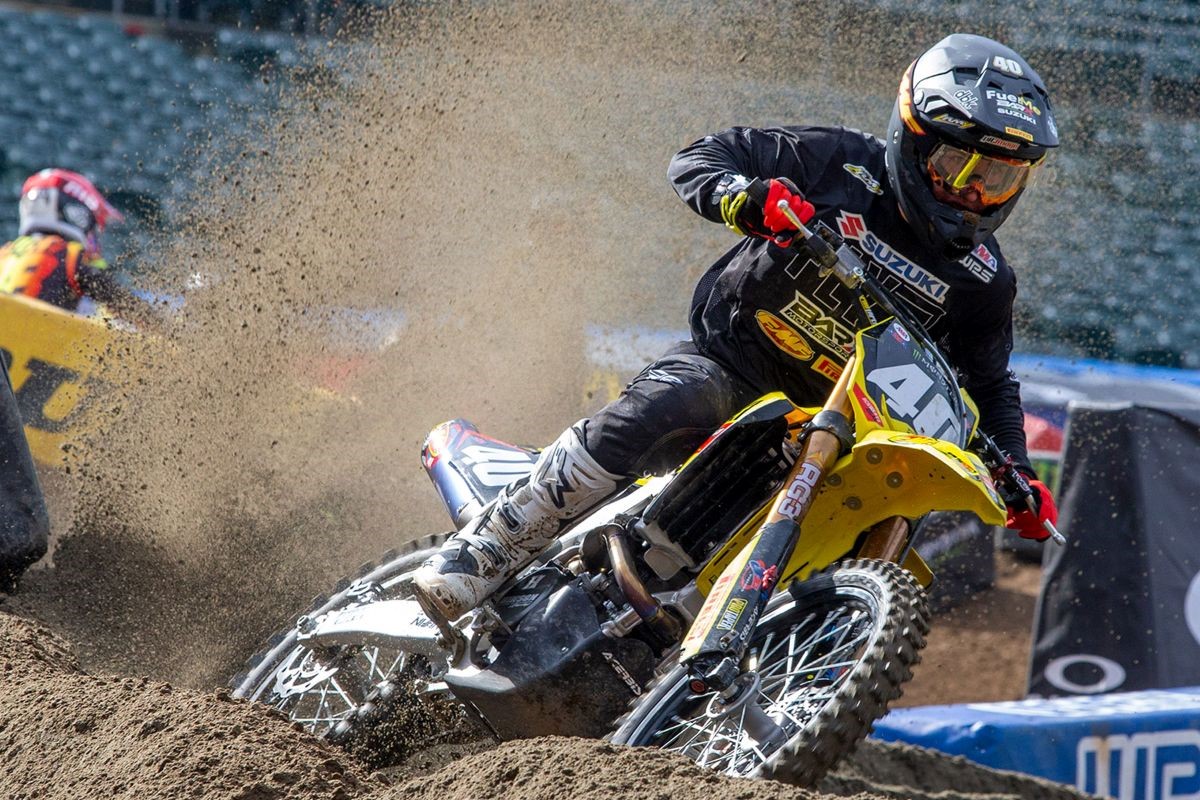 Dilan Schwartz (40) improved his opening round result by four spots.

Dilan Schwartz was caught in a first turn pile-up in heat two that left his bike buried beneath another machine. As a result, he had a late gate pick in the LCQ, but timed his jump off the gate perfectly. He rocketed into a top five position at the holeshot stripe. A second-place finish in the LCQ sent him to the main event, where Schwartz ran inside the top ten for most of the race. He earned enough points to move up three positions in the championship points battle.

"I had a first turn tip over in the heat. My bike was pretty mangled, so I had to go to the LCQ," Schwartz explained. "I got a better start in the main and improved my result from A1 so I'm just going to keep improving each weekend." 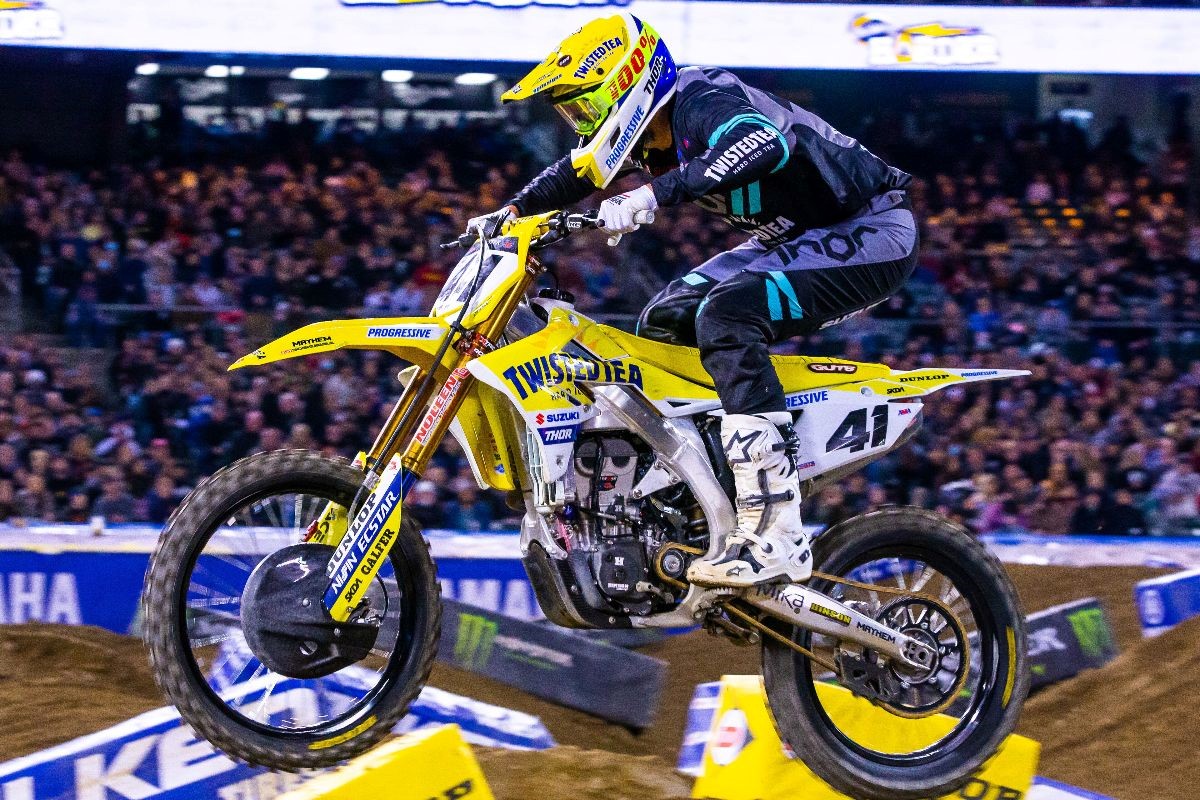 Brandon Hartranft (41) looks more and more at home running the pace of the 450 racers in his second season in the class.

Brandon Hartranft put his Twisted Tea Suzuki RM-Z450 directly into the main event after a solid heat race performance. A late gate pick resulted in a poor start in the main, yet Hartranft battled, gaining a few spots on the track and one position in the championship point standings leaving Oakland.

"In the main event I didn't really have that strong of a start, but I fought hard through the whole race." Hartranft said. "I got into sixteenth and just tried to put in as many solid laps as I could, especially for how gnarly that track was. One of the sets of whoops - I've never seen a goat trail down the middle so deep! I personally like it when the track's beat like that. That's when I feel like I ride my best. I'm working hard and the team's working hard and I want to show more potential and better results." 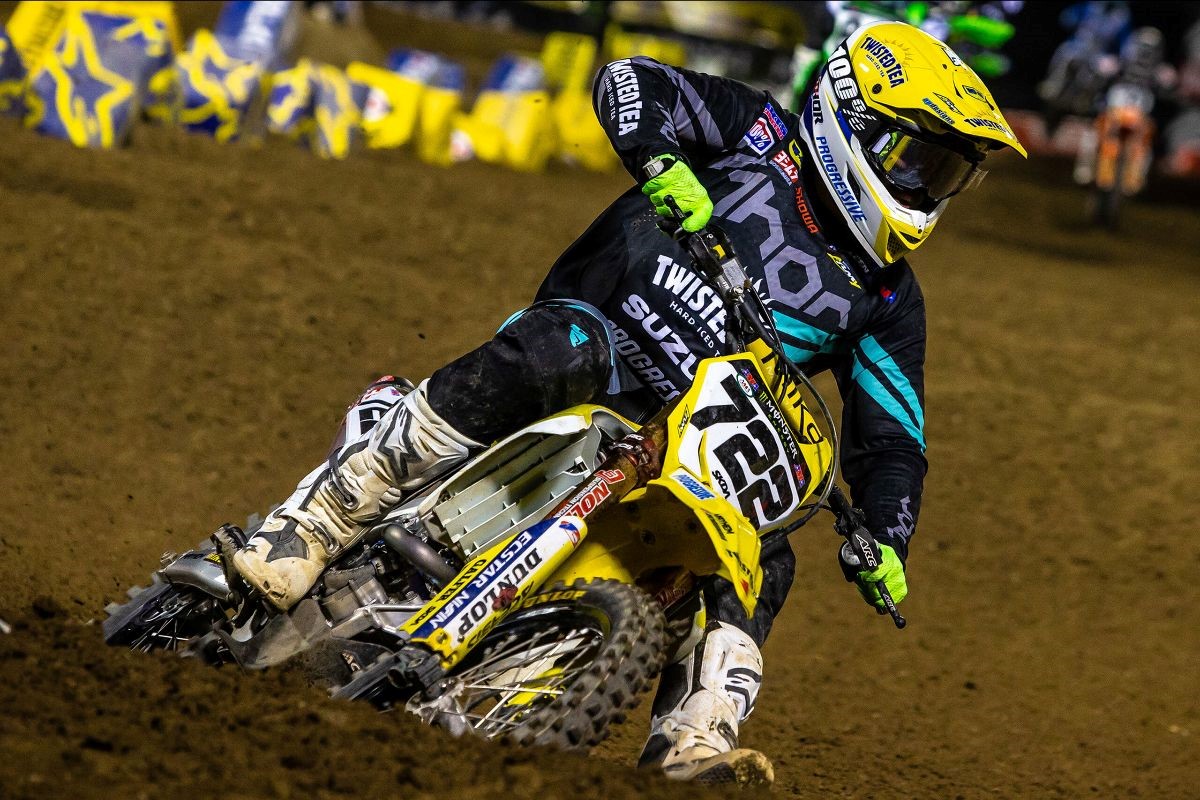 Local favorite Adam Enticknap (722) had a wild night at his hometown supercross race.

While in position to transfer to the main event Adam Enticknap got cleaned out and ripped off the bike by another rider. It was a wrong place/wrong time incident that clipped Enticknap's night short before he could gain title points on his Twisted Tea Suzuki.

"The dirt was super tacky, it was just absolute traction everywhere," Enticknap enthusiastically recapped. "In heat one I didn't ride like I wanted to ride, but I learned the lines. In the LCQ, got a great jump out of the gate, it was awesome. I poked it in there coming into the first corner, then passed into third on the first lap. A few laps in another rider came across the track and just took me out, up over the hay bales. I'm not really sure what was going on considering we were in third and fourth. That ended my night. I wish I could have that LCQ back. I'm looking forward to a great stadium and a great city next weekend." 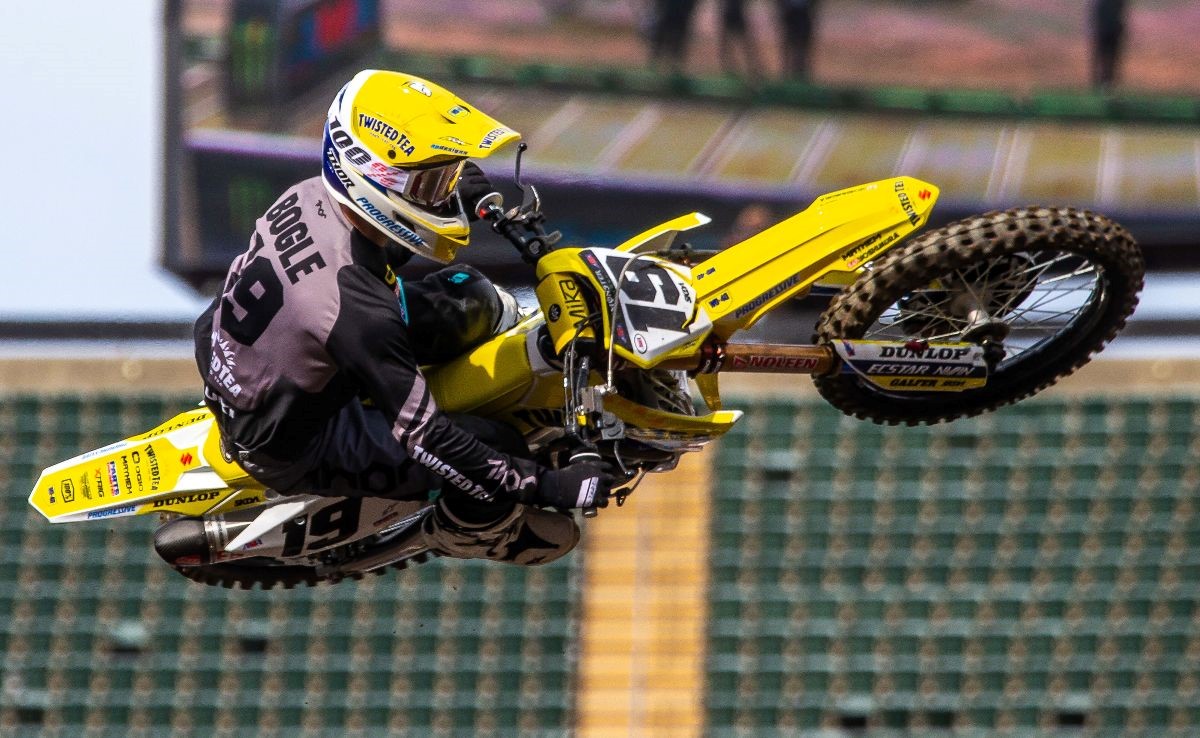 Justin Bogle (19) was looking great and used his experience to put his RM-Z450 straight into the main event from heat one.

In the 450-class main event, Justin Bogle unfortunately didn't get off the gate well at the start, then had to pull off mid-race.

"It was a solid, building night in Oakland," Twisted Tea/H.E.P. Motorsports/Suzuki Presented by Progressive Insurance Team Manager Dustin Pipes summed up the racing. "Brandon continues to get better and is knocking on the door of the next level. Justin had a trying day having to cope with a personal tragedy and compete with the best racers in the world at the same time. The results don't show what he is capable of. The whole team is proud of his resiliency and willingness to compete. Adam rode well. It was unfortunate to have his night determined by another racer's incident. The ball is rolling going into round three and I feel we're only going to pick up steam from here."

The Suzuki teams travel south to San Diego for round three of the 17-round 2022 Monster Energy Supercross series. The venue marks the hometown supercross race for Dilan Schwartz. He, the other athletes, and Suzuki crewmembers are gaining momentum to put more yellow bikes up front.