Carson Mumford and his Suzuki RM-Z250 started the year with a strong ride and a top ten result in Mumford's first race with the BarX/Chaparral Suzuki team. Teammate Dilan Schwartz overcame a tough racing incident to put in solid laps on his Suzuki RM-Z250 in his sophomore supercross season and looks to move up next week. Brandon Hartranft brought home a handful of points in his second year in the 450 class with his Twisted Tea Suzuki presented by Progressive Insurance Suzuki RM-Z450. Hartranft's teammates Justin Bogle and Adam Enticknap had tough nights but leave healthy and ready to improve at round two. 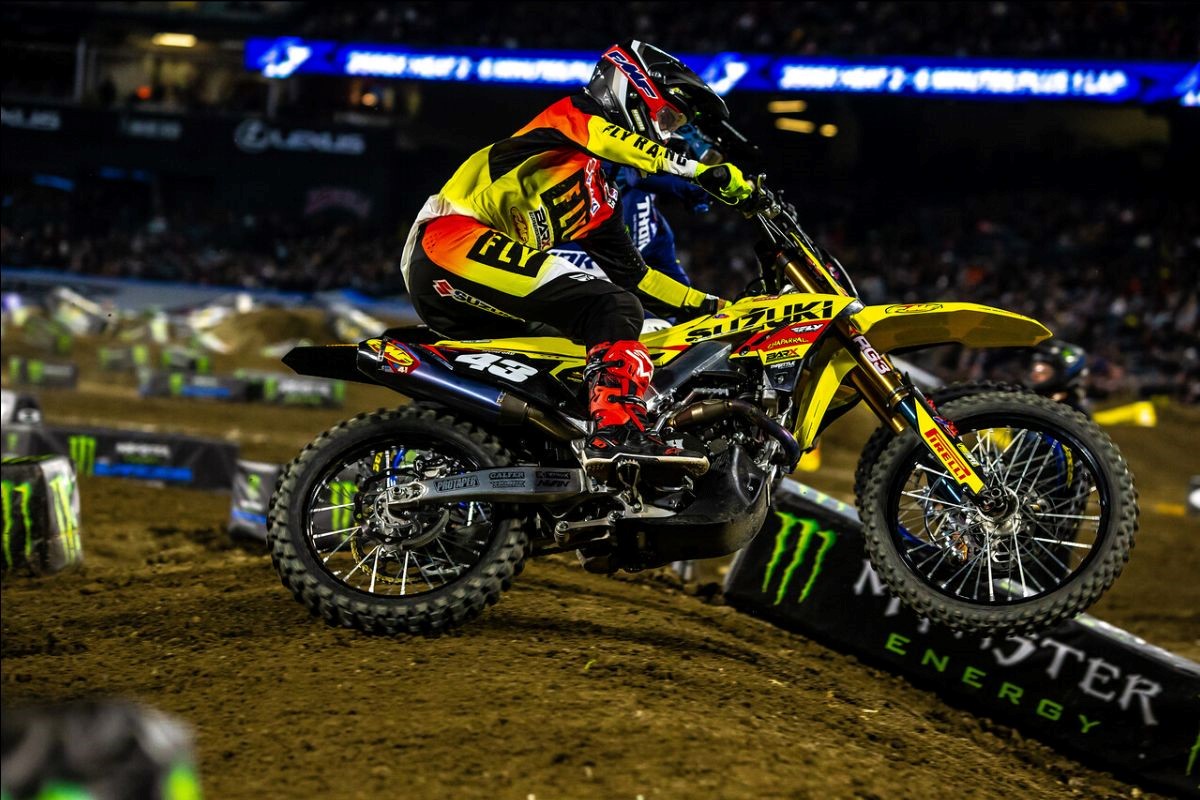 Carson Mumford got a strong start with his RM-Z250 in the 250 main event and advanced into the top five before the first lap was complete. Mumford battled in the top group for much of the 15-minute plus one lap race. He held tough as the technical track broke down and grabbed top ten points in his first ride with the new team.

"My starts were key. My bike has such great, controlled power it made it easy to get strong starts with how short the start straight was," Mumford reported. "I got a little tight in the end of the main after running in fifth place for over half the race. Hearing the crowd go crazy all the time was totally new for me and was awesome! I'm looking forward to next week and finishing stronger." 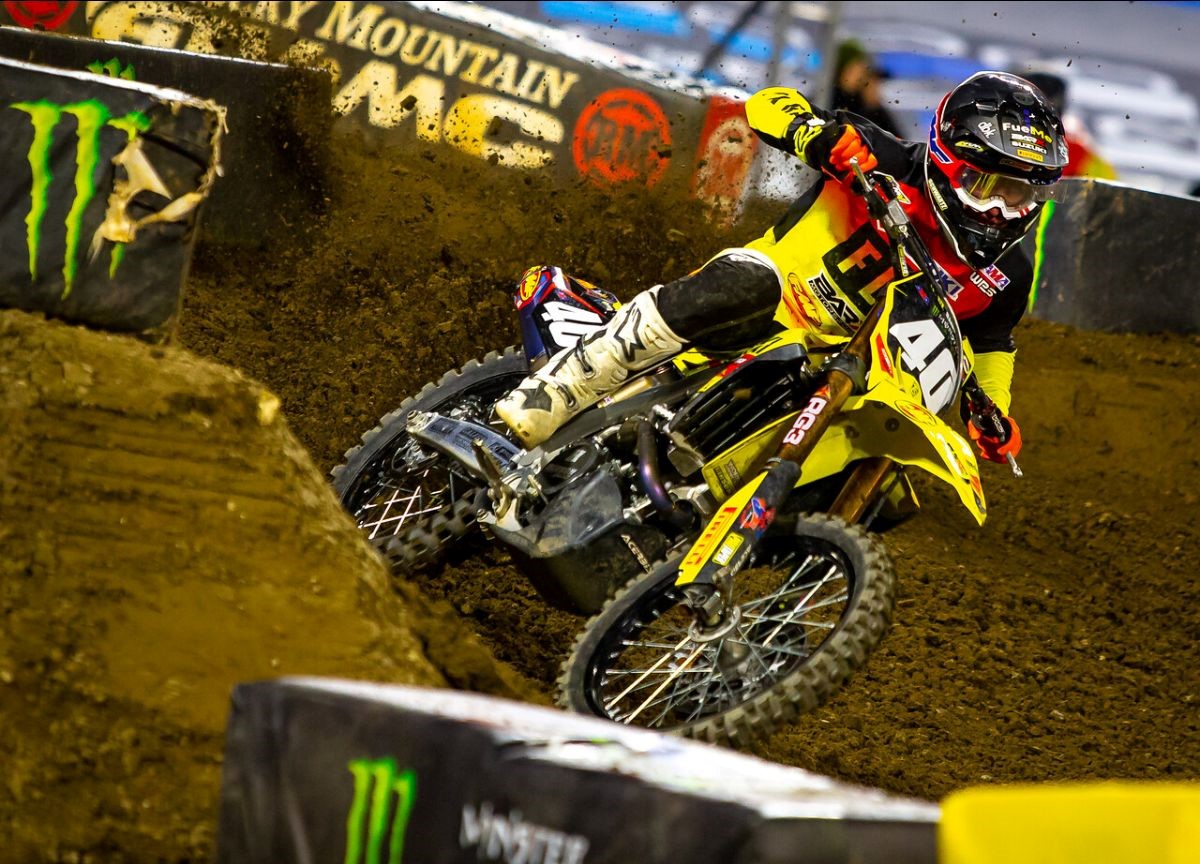 Dilan Schwartz (40) raced hard and is looking forward to the next race in Oakland.

Dilan Schwartz showed impressive speed in only his second supercross season. While in a top five spot in heat one he ran into trouble, eventually leading to a poor gate pick in the main event. Schwartz battled strong for the 16-lap race, but with his mid-pack start he wasn't able to begin the season with the finish he's capable of delivering.

"Anaheim 1 was tough. I struggled all day with the track and getting comfortable which led to a couple crashes," said Schwartz. "I'm glad I was able to get through the night healthy enough to keep racing. I'm going to keep working and improving my results!"

Brandon Hartranft (41) delivered a solid start to his second season on the Suzuki RM-Z450.

Brandon Hartranft was prepared and ready for a great second year on the Twisted Tea Suzuki RM-Z450. He turned a sixth-place start in the last chance qualifier into a second-place finish. Although his gate pick made it a challenge to get up front early in the main event, Hartranft put in steady laps as the saturated soil broke down. Hartranft leaves with championship points and good confidence.

"Today started out a little rough. I crashed in the whoops in the first practice. But every time I got on the track after that, I rode better and better," Hartranft summed up the event. "It's been raining recently in California so the dirt's soft from that. The track was pretty basic, but it was so soft and rutted that it became more technical. But all in all, we had a solid night. I'm looking forward to the next 16 rounds and I have a lot to show. I can't thank everybody from Suzuki and my team enough, and we'll kick some butt next weekend." 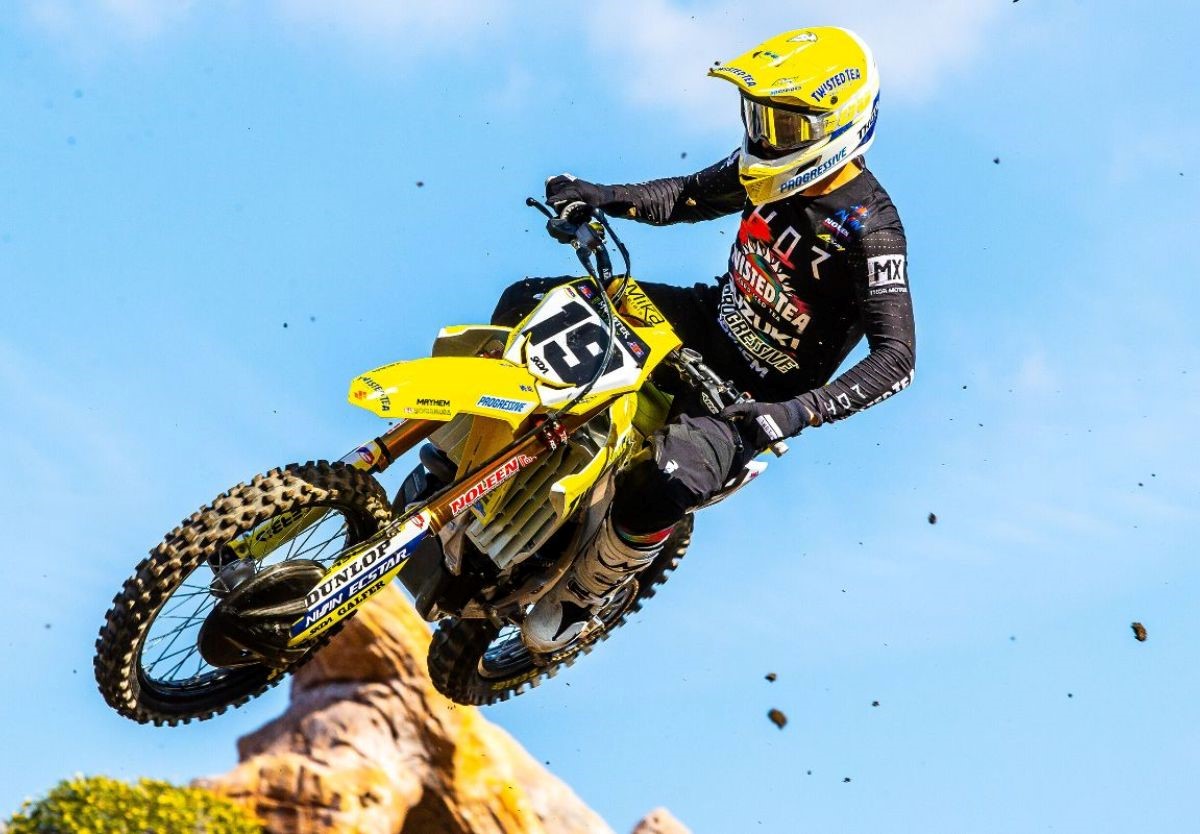 Justin Bogle (19) styled in his first race back on the Suzuki RM-Z450.

Justin Bogle had speed and style getting back onto a Suzuki RM-Z450 race bike, this season with the Twisted Tea team. Bogle got a strong start in the last chance qualifier, passing from third to second on the first lap then colliding with another rider while passing for the lead on the second lap. The contact was light, but the riders tangled, and Bogle tipped over in the whoops. With the pack bunched up, the small mistake cost Bogle as it put him too far back to recover to a qualifying position in the short race.

"It was a rough night all the way around." Bogle said, "It was not how we wanted to kick off my first race with the new team, but on the positive side we are healthy and going back to work to get better for next weekend. I had a crash while in transfer position in the heat, then again in the LCQ. It was just a couple mistakes on my end that I need to correct and be better." 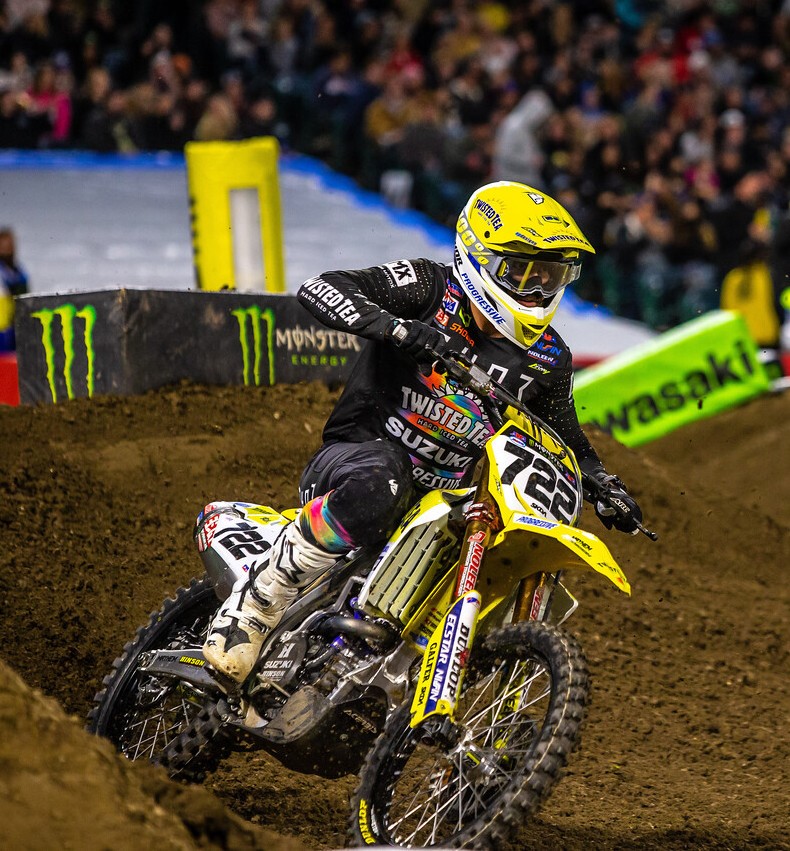 Crowd-favorite Adam Enticknap was flying his #722 Twisted Tea Suzuki RM-Z450. Unfortunately, his starts kept him out of transfer positions despite the strong speed he showed on the stadium track.

"I got some good jumps out of the gate, but I was not riding like I wanted so we're going to make some adjustments to my technique and try to get that figured out. I feel like I have all the big pieces in line, I just need to get a few little things sorted and work on that first lap sprint speed." Enticknap looked forward, "Oakland is kind of my home race. I'm looking forward to the dirt, looking forward to the stadium, looking forward to the fans, and looking forward to another try to kind of turn around this A1 result. It's not exactly what we wanted, but we came out healthy and we're ready to go for the second one."

"A1 is always a big event for the team and with it being in such an iconic location the fanfare is always off the charts," said Twisted Tea/H.E.P. Motorsports/Suzuki presented by Progressive Insurance Team Manager Dustin Pipes. "Justin made some rookie mistakes which ended his night early. Falling twice while in a transfer position is never a recipe for success. The talent and pedigree are there so I would look for Justin to put this quickly behind him. Brandon rode well in a very deep field. A better start will be crucial to getting him a better main event finish."

The racers now head north to RingCentral Coliseum in Oakland, California for round two of the 17-race supercross series. With the first race in the books, the new and returning riders to the Suzuki 450 and 250 race teams are excited to put their race bikes up front and continue battling for top finishes.