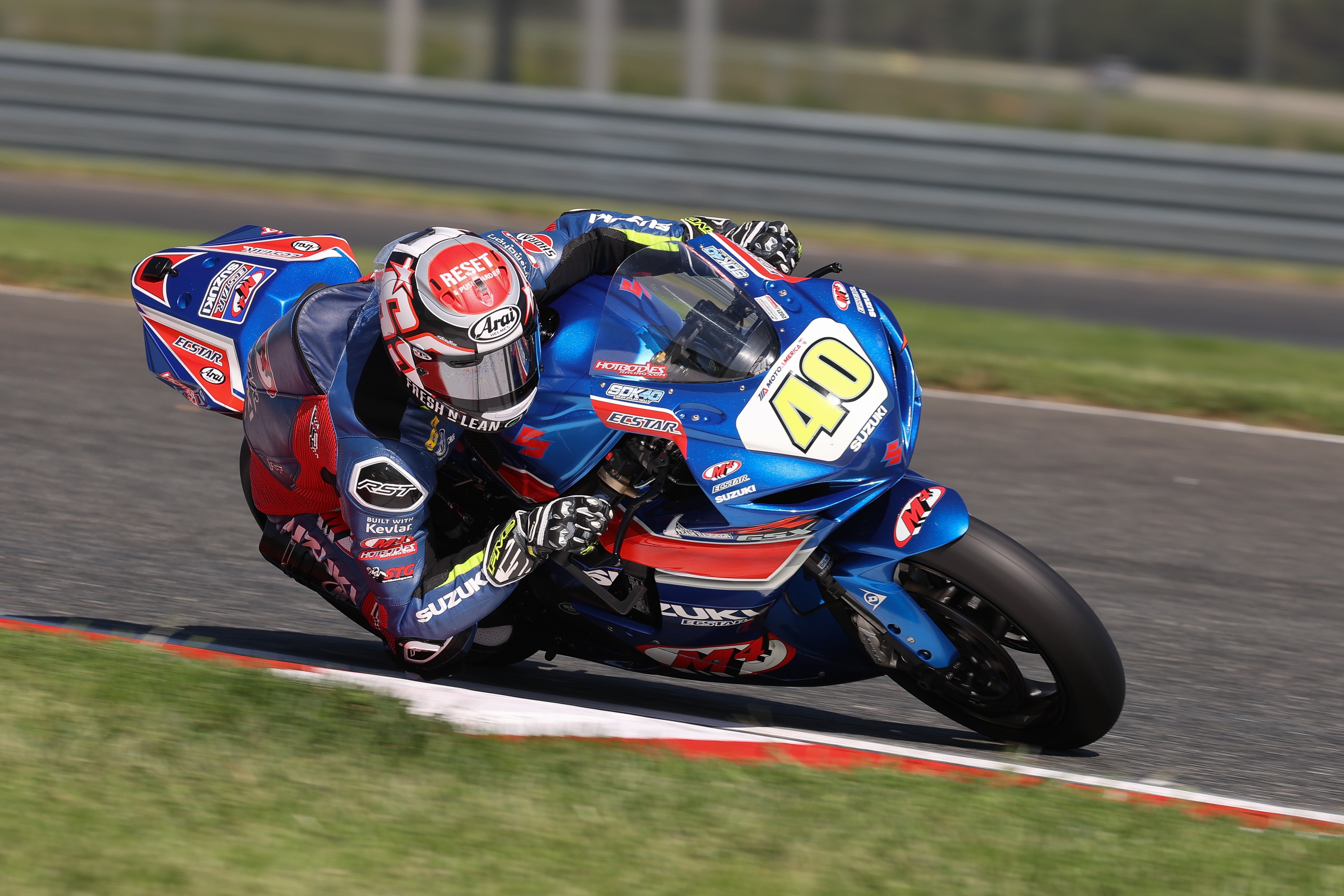 ‘SDK’ did so in his inimitable fashion, showcasing the trademark daring and racecraft that got him to this point. Despite the temptation to play it safe with a big championship lead in hand, the 19-year-old instead chose to battle it out for victory both days.

On Saturday, he scored his 11th victory of the season by an impossibly tight 0.001 seconds thanks to even more last-lap heroics aboard his GSX-R600. On Sunday, he earned his 15th podium of the year, missing out on a 12th victory by just 0.040 in second position, which was more than enough to claim the Supersport throne.

“This is very emotional,” Kelly said after being handed the ceremonial number one plate. “I’ve been working really hard for this. My family and I put everything on the line and it’s been tough. My parents have given everything they’ve had for me to get to this point. We never stopped fighting.

“I want to thank everyone who has supported me and pushed me since I started racing. This is my first national championship and it’s a dream come true. I fought for this. I had a lot of doubters last year, thinking I wasn’t good enough, but I came back stronger this year and did what I needed to do to win.

“Thank you to M4 ECSTAR Suzuki for believing in me and giving me this opportunity. And thanks to all my guys for sacrificing so much to make sure the bike was always as good as it could be.” 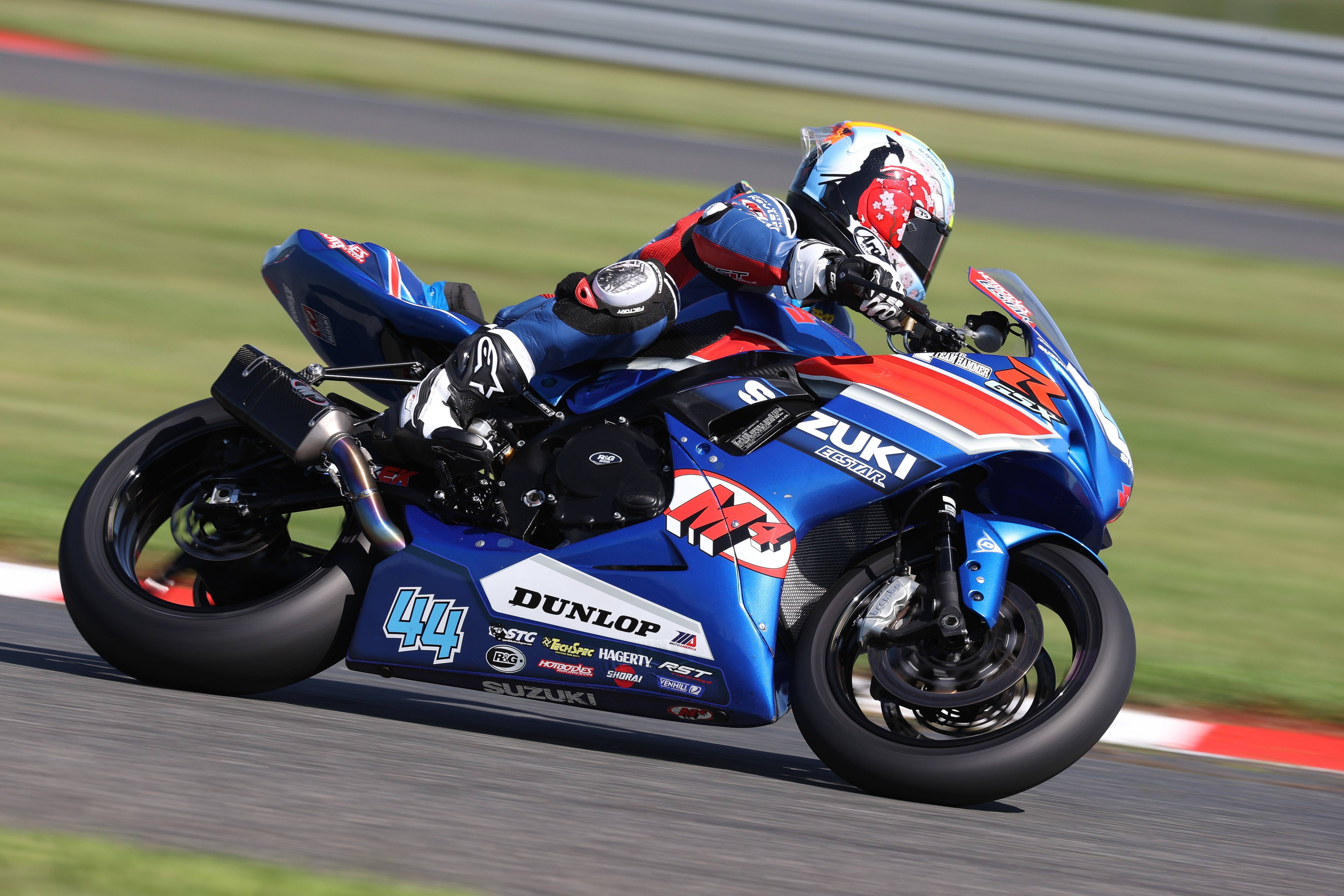 Sam Lochoff (44) took his first Supersport win on Sunday with the performance of his Suzuki GSX-R600.

Kelly’s narrow defeat on Sunday was still a massive success for the team, however. Teammate Sam Lochoff emerged victorious in the four-rider showdown.

Lochoff was in spectacular form all weekend long at NJMP. He was on provisional pole on Friday, led laps en route to a fighting third on Saturday, and at last claimed his maiden MotoAmerica Supersport win in thrilling fashion on Sunday.

The South African said, “It’s my first victory in three years. I’ve finished on the podium several times, but I really wanted to get that win. Now that I have, it’s kind of hard to speak.

“It was a great race with Sean and the guys. I fixed what I was struggling with yesterday, and that just made the difference. I’m pretty sure this won’t be the last time I battle with them. I just want to thank M4 ECSTAR Suzuki for everything.” 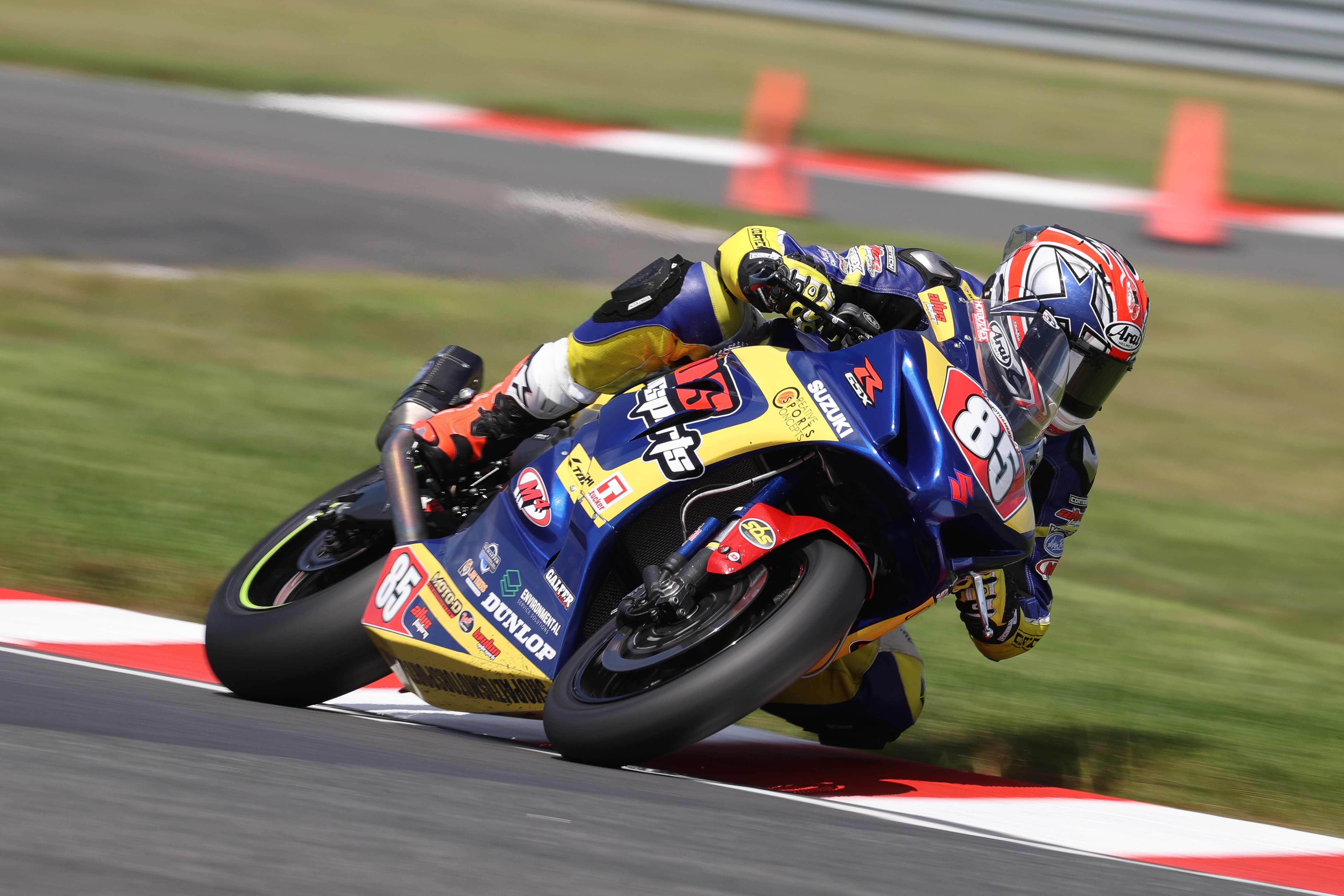 Jake Lewis (85) took his fifth win and the MotoAmerica Stock 1000 Championship on his Suzuki GSX-R1000R.

Lochoff and Kelly weren’t the only Team Hammer-supported riders celebrating wins in New Jersey. Altus Motorsports Suzuki’s Jake Lewis also locked down the Stock 1000 national championship on Saturday with his fifth victory of the year.

And like Kelly, Lewis earned his win with a final-lap pass aboard his Team Hammer-built GSX-R1000R to close out his championship campaign in style.

“I wanted to go out and get the championship from the top step to reward my team and that's what we did,” Lewis said. “Last year, I was out of the paddock, sitting on the couch, over 200 pounds, and in a tough spot. I thought about quitting racing, but I’ve been traveling the country in a van with my mom and dad since I was four years old, chasing a dream. I worked hard to get back in shape. After I got my butt kicked at the first round, I knew it was time to get going, and we’ve been on the podium pretty much ever since.

“Big thanks to Altus Motorsports for the opportunity and to Team Hammer as well for the amazing technical package.” 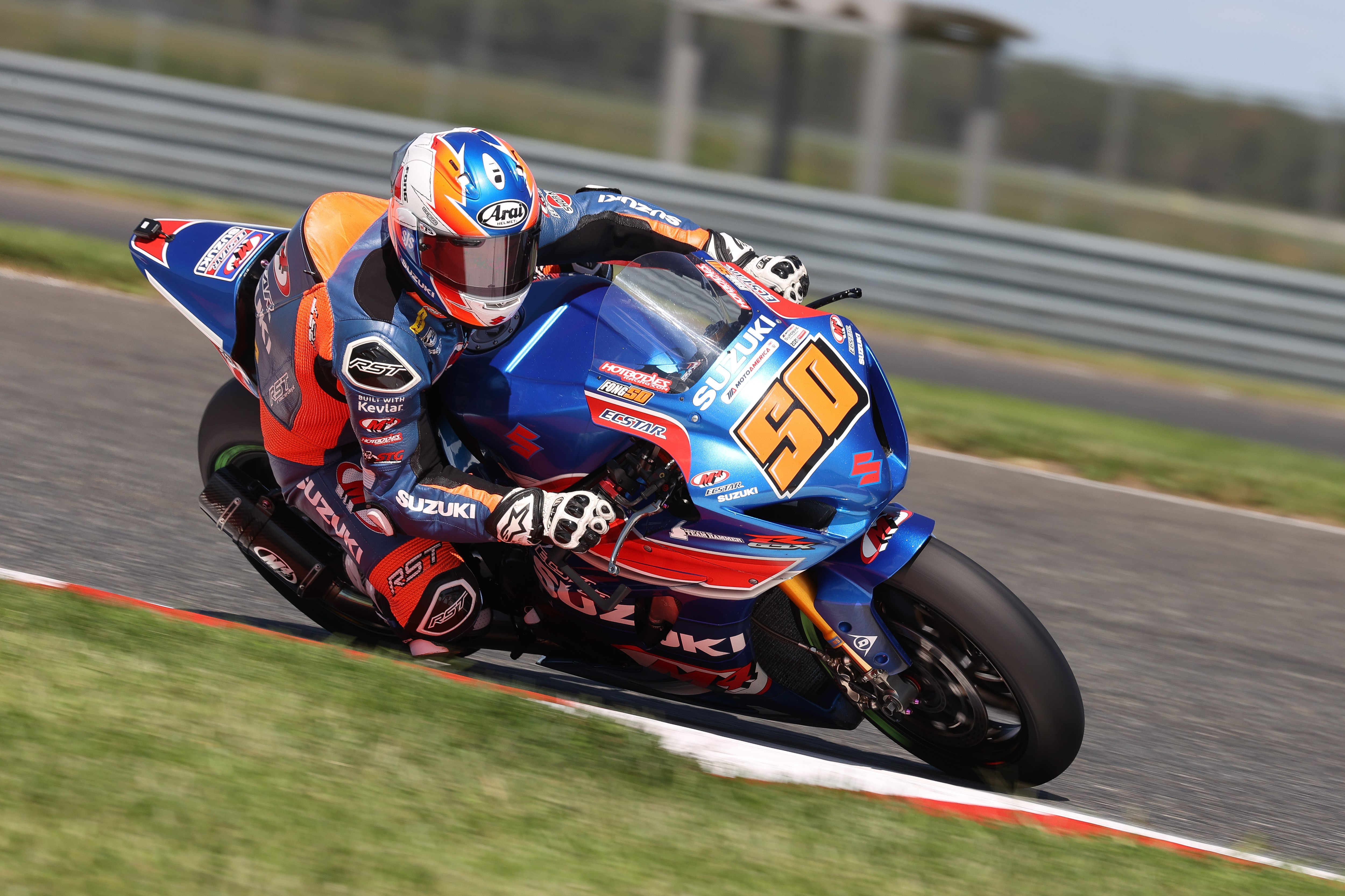 M4 ECSTAR Suzuki’s Superbike duo of Cameron Petersen and Bobby Fong combined to claim three top five finishes, although both riders flashed the speed to be on the podium.

Fong finished fourth on Saturday while taking his challenge for third to the flag. He then led briefly in Sunday’s morning race before crashing out of third. The Californian gritted it out later in the day by finishing ninth in the weekend’s third premier-class contest. 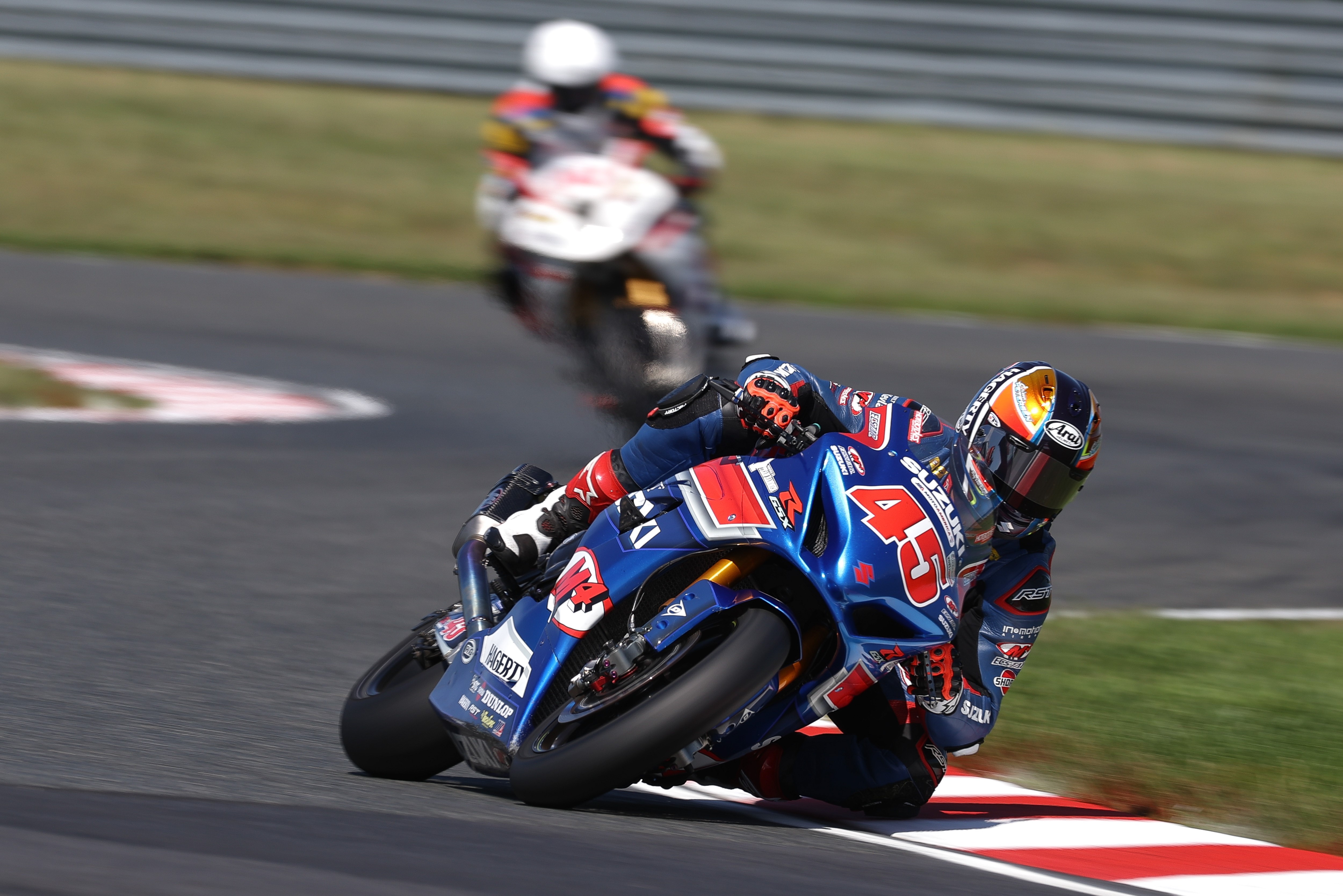 Petersen, meanwhile, improved throughout the weekend. He finished seventh on Saturday while fighting for fifth, and then picked up a pair of fifths on Sunday, including one taken after putting forth an extended challenge for third in the final race of the weekend.

M4 ECSTAR Suzuki’s Wyatt Farris bounced back from his Pittsburgh disappointment to return to the top ten with a tenth-place ride in the Stock 1000 race. Farris earned a fighting fourth in Sunday’s afternoon Superbike Cup race-within-a-race.