Brea, CA (September 7, 2021) – The Suzuki racers delivered outstanding results at round eleven of the 2021 AMA Pro Motocross Series at Fox Raceway in Pala, California. Max Anstie and his Twisted Tea/H.E.P. Motorsports/Suzuki RM-Z450 brought home two top-ten rides, including a top five moto finish, to take sixth place overall. Anstie's Twisted Tea/H.E.P. Motorsports/Suzuki teammate Brandon Hartranft had a career-best 450 race, turning consecutive top ten moto finishes into an eighth-place overall result on his Suzuki RM-Z450. In the 250 class Dilan Schwartz was again inside the top ten, having his career-best finish on his BarX/Chaparral/ECSTAR Suzuki RM-Z250 while teammate Preston Kilroy continued to impress in only his fourth pro event this season aboard his Suzuki RM-Z250 race bike. 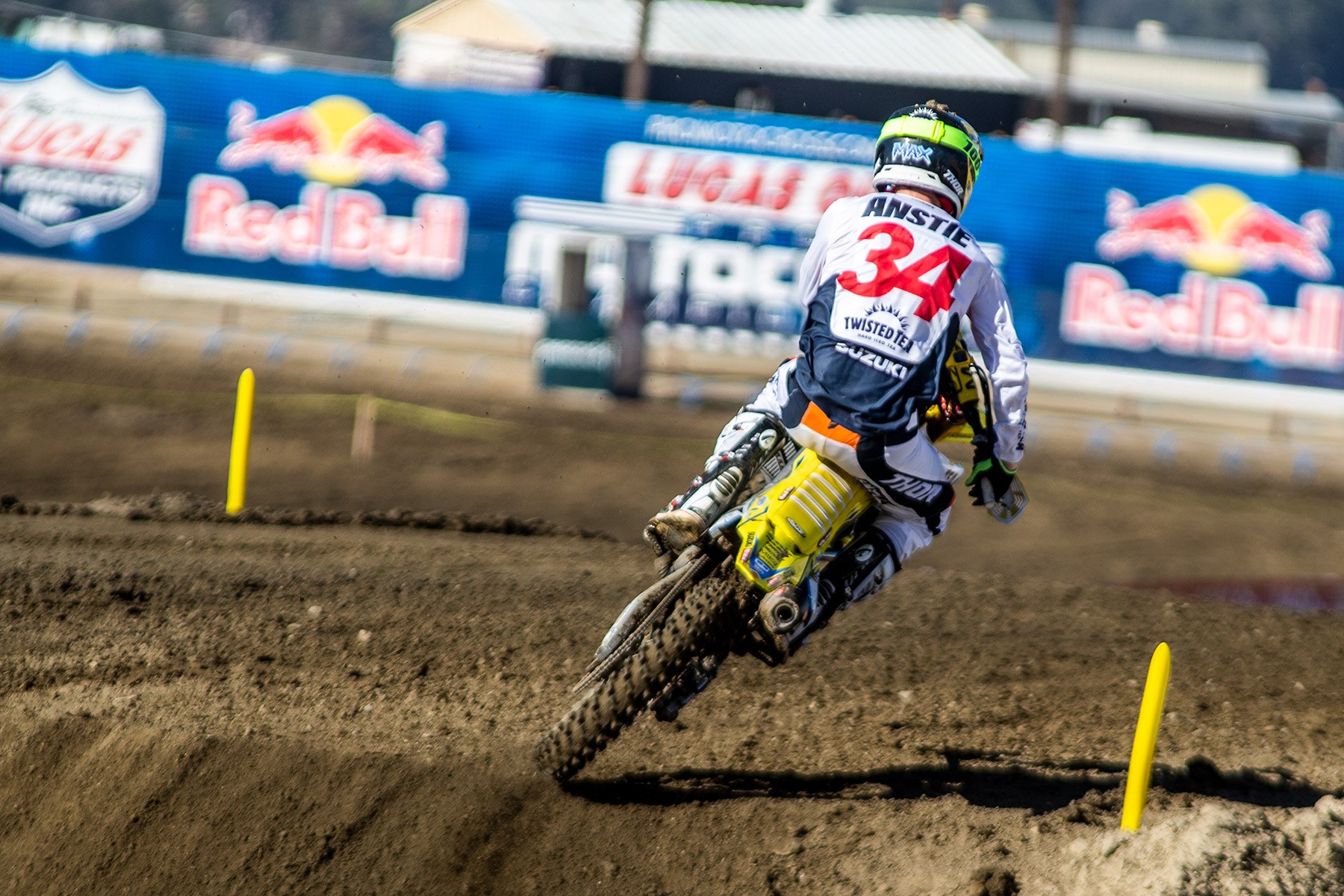 Max Anstie hit his stride mid-season and stepped up to another level on the high-speed California track. Anstie put his Suzuki RM-Z450 inside the top ten at the holeshot line in both motos and finished the day passing forward to nab a top-five finish.

"Pala 2 was good," reported Anstie after the race. "I ended up missing the last race because I got COVID; I managed to beat that faster than what I expected. I came here today and wasn't really sure what to expect, I didn't know how my breathing, and everything was going to be, but I felt good. It was warm, the team did a great job with the bike, and we got two solid races, going 6-5 for sixth overall. It was definitely a strong comeback and I’m happy with the performance. I'm going to go into the last race at Hangtown firing on all cylinders." 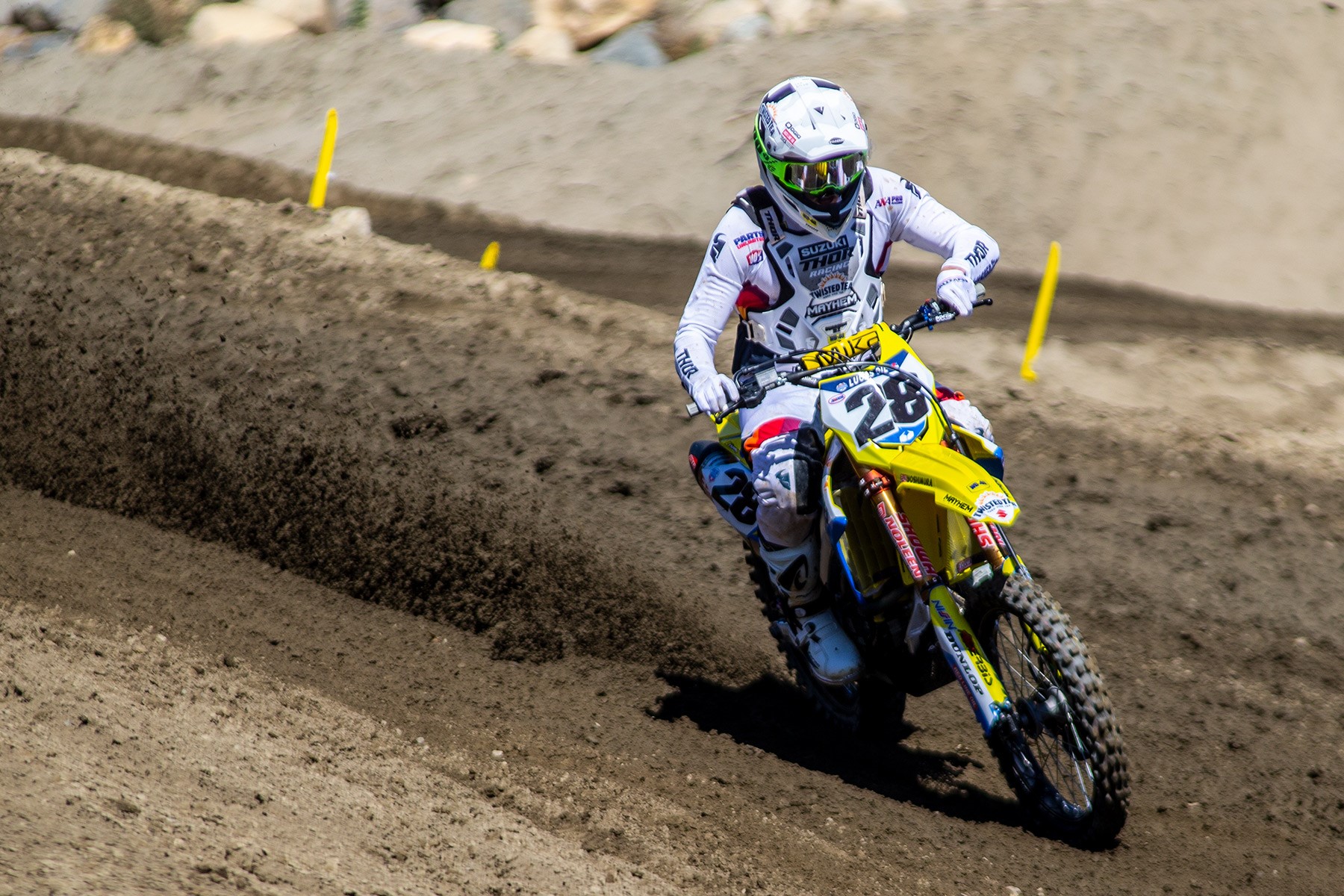 450-class rookie Brandon Hartranft put his Suzuki RM-Z450 power into the ground off the gate for two top-ten starts. From there Hartranft attacked the jumps and finessed the deep ruts. He used a career-best 450 moto finish to post his career-best 450 overall finish. The effort jumped Hartranft up a full three positions in the championship point standings.

"I ended up eighth overall. It was a really good day and my best finish of the year," said Hartranft. "The track was almost like a supercross/outdoor track, and we were definitely tested with the heat today. The weather was brutal. I qualified ninth, and in the first moto I got tenth, which was a good ride. In the second moto I rode much better and ended up eighth, so I'm very pumped at how I'm doing."

"Max rode great and battled towards the front all day," reported Dustin Pipes, Team Manager for the Twisted Tea/H.E.P. Motorsports/Suzuki team. "Brandon took another step in the right direction with his eighth-place finish. His suspension set-up didn’t translate to this track, so he did well to adapt and put his best foot forward. We’ll come up with a new setting for the final round and come out swinging." 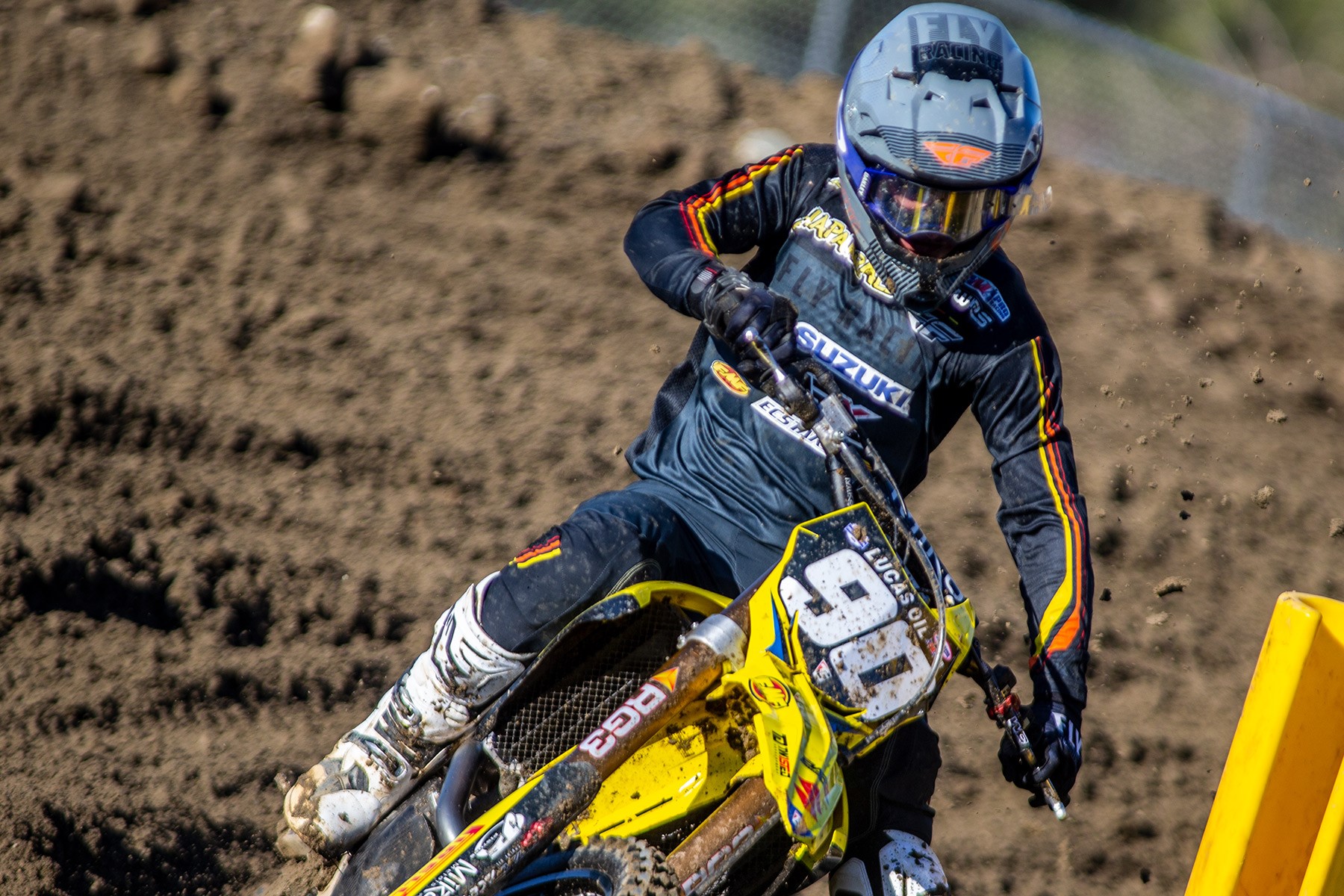 Rookie Dilan Schwartz continued his streak of top-ten overall finishes. On what is essentially his hometown track, the young racer nabbed a seventh overall spot after passing his way toward this front in both motos.

"Today was a tough, but good day," said Schwartz. "10-8 moto scores for seventh overall – I'm happy with the two finishes inside the top 10 and my best overall finish. I'm excited to be going into the last round healthy and I'll do my best to put in another strong finish to wrap up the season!" 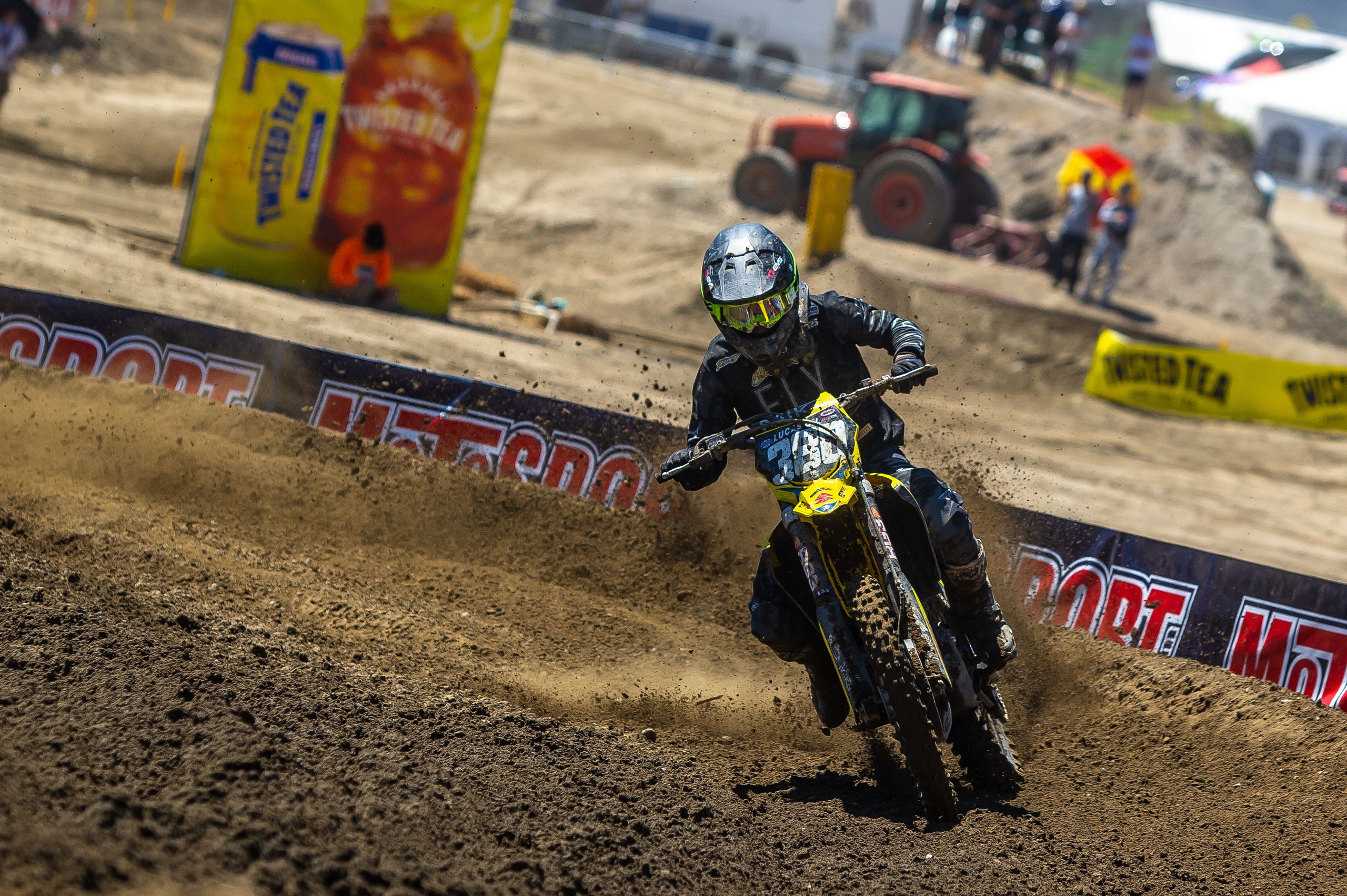 Preston Kilroy (380) put in a strong ride to move up one spot in the championship points race.

At only his fourth pro race of 2021, BarX/Chaparral/ECSTAR Suzuki's Preston Kilroy recovered from a second-turn pile-up in Moto 1 to salvage another impressive rookie finish. ECSTAR oil products kept his Suzuki RM-Z250 cool and putting out maximum power on the 100+ degree day. The strong ride moved the young racer up one spot in the championship points.

"In the first moto I was caught in a first turn pile-up and my bike got wedged with another bike," Kilroy said. "I did what I could and pushed from pretty much last to 16th. In Moto 2 I got a decent start and was able to log some good laps. Then I made a slight mistake in a corner; I saved it, but lost a bunch of time, so I had to make some passes towards the end, and I wound up eleventh. Overall, I’m excited with how my riding has been and I’m excited to see how I can do at the last round!" 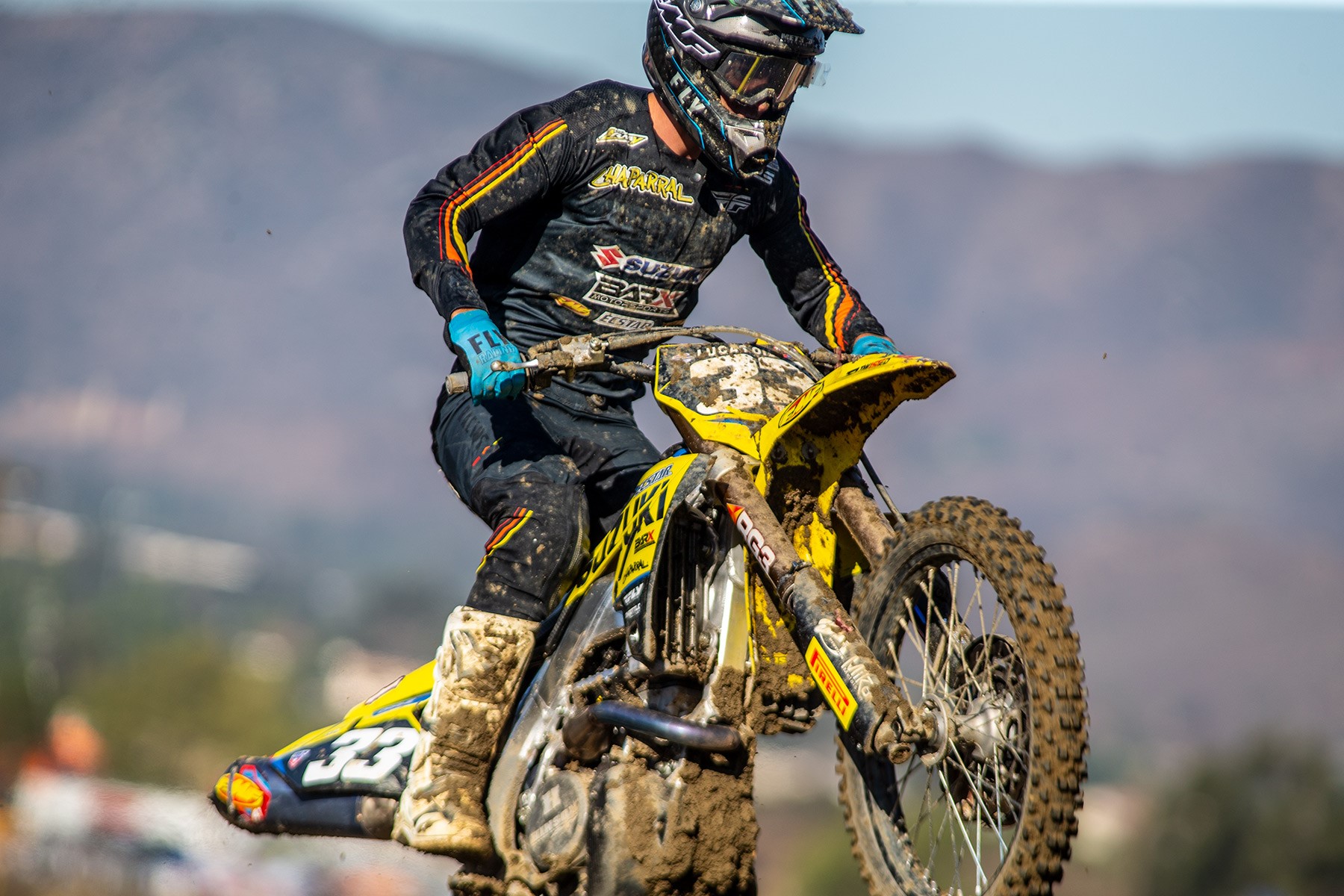 Derek Drake (33) was back at Fox Raceway running just outside the top ten on his RM-Z250.

Derek Drake was back on the track after being forced to step away from racing earlier this season before round four due to a heart condition. Drake put his BarX/Chaparral/ECSTAR Suzuki RM-Z250 up front in Moto 1, running just outside of the top ten for much of the race. After nearly 30 minutes of racing, Drake was feeling the effects of the extreme heat and wisely chose to return to the pits.

"It was great to be back!" Drake went on to tell, "I felt good all day, but I just overheated in the first moto, it's as simple as that. I’m looking forward to racing the next round at Hangtown!"

The 2021 Outdoor Motocross concludes this upcoming weekend at the season finale at the Hangtown Motocross Classic in Rancho Cordova, California. The Suzuki racers have the momentum going their way to cap the season with strong results for the teams' already successful seasons.