Brea, CA (July 12, 2021) – Following several days of heavy rain, the sun came out for round five of the AMA Pro Motocross Series' return to the deep sand of The Wick 338 in Southwick, Massachusetts. Twisted Tea/H.E.P. Motorsports/Suzuki's Brandon Hartranft matched his career-best moto finishes of the previous round on his Suzuki RM-Z450 for a strong performance on the brutally-rough track. Teammate Max Anstie, also on a Twisted Tea/H.E.P. Motorsports/Suzuki RM-Z450 rebounded from a tough first moto to post a strong ride and result in the final moto of the day. Rookie 250-class racer Dilan Schwartz brought home points with his BarX/Chaparral/ECSTAR Suzuki RM-Z250 at his first professional race at the legendary sand track. 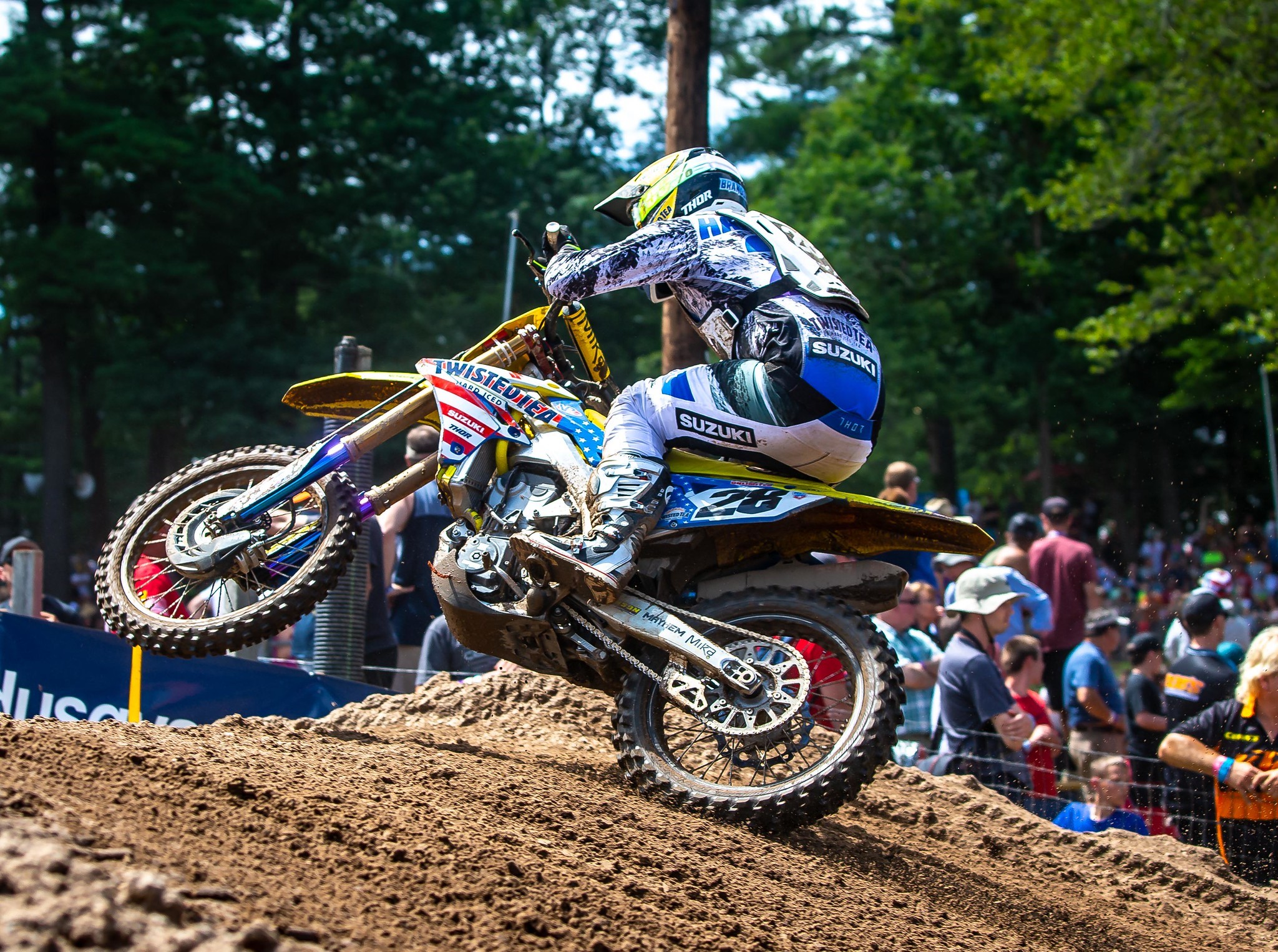 In his rookie season in the 450-class, Hartranft impressed again with two rides that saw him pass his way forward from mid-pack starts in both motos. His bold charges landed him moto finishes that equaled his previous best for a 450 event and earned him the points needed to advance two positions in the championship point standings.

"Round five was really good," Hartranft summed up after the race. "I’m riding really well right now. In Moto 2 I was battling for the top ten the whole time with four established 450 racers, so I know my fitness is really good. I'm very proud of myself. It's been a long year and I'm getting much better by the day; I am definitely building confidence. The track was brutal, so I'm pumped that I fought to the end in the second moto. Now I'll just go back home to California, keep my head down working, and hopefully put it in the top ten again. I'm looking forward to next weekend at Millville." 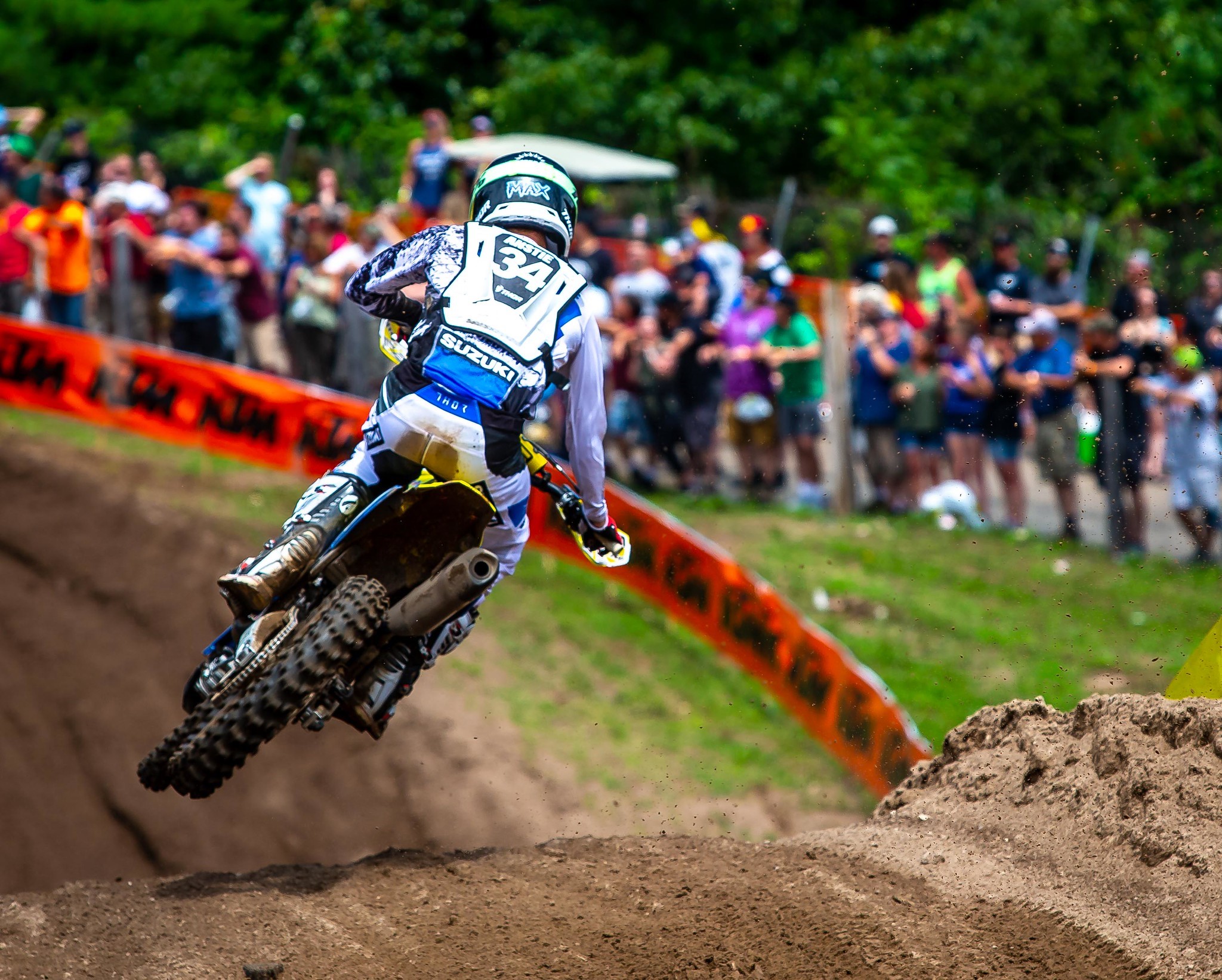 Making his first appearance at the legendary Southwick track that is known for how quickly the bumps develop, sand specialist Max Anstie couldn't deliver the sand ride breakthrough his fans were looking for despite showing incredible speed and flirting with a top ten spot in both motos. Even with a poor gate pick in Moto 2, the Englishman produced a mid-pack start and nearly matched his season-best moto finish.

"It was a tough weekend," said Anstie shortly after the race. "I was really looking forward to this place, but we had a few issues in the first moto and they took me out of it. I didn't have the greatest gate pick for the second moto, but I rode as hard and strong as I could, and we came home twelfth. We'll go back to the drawing board and regroup with all eyes on Millville coming up next weekend. We only have seven days to recover; this was a tough one for the body, really for everything, so we're just going to focus on recovery and get ready for Millville."

"Southwick lived up to its reputation as it was a difficult and physically demanding track all day," reported Twisted Tea/H.E.P. Motorsports/Suzuki Team Manager Dustin Pipes of the round that was presented by his own team's title sponsor. "Brandon is really starting to hit his stride and get comfortable racing against competitors who were once his idols. He flirted with the top ten all day; from first qualifiers to the final moto he was just at the heels of the lead pack. I’m happy to see his continued growth. Max had a great pace in Moto 2 and with a few more laps would have again found himself in the top ten. I was really impressed with Clark, Ryan, and Andrew and their ability to handle all the team's needs on a tough weekend; they deserve a Twisted Tea after that one!" 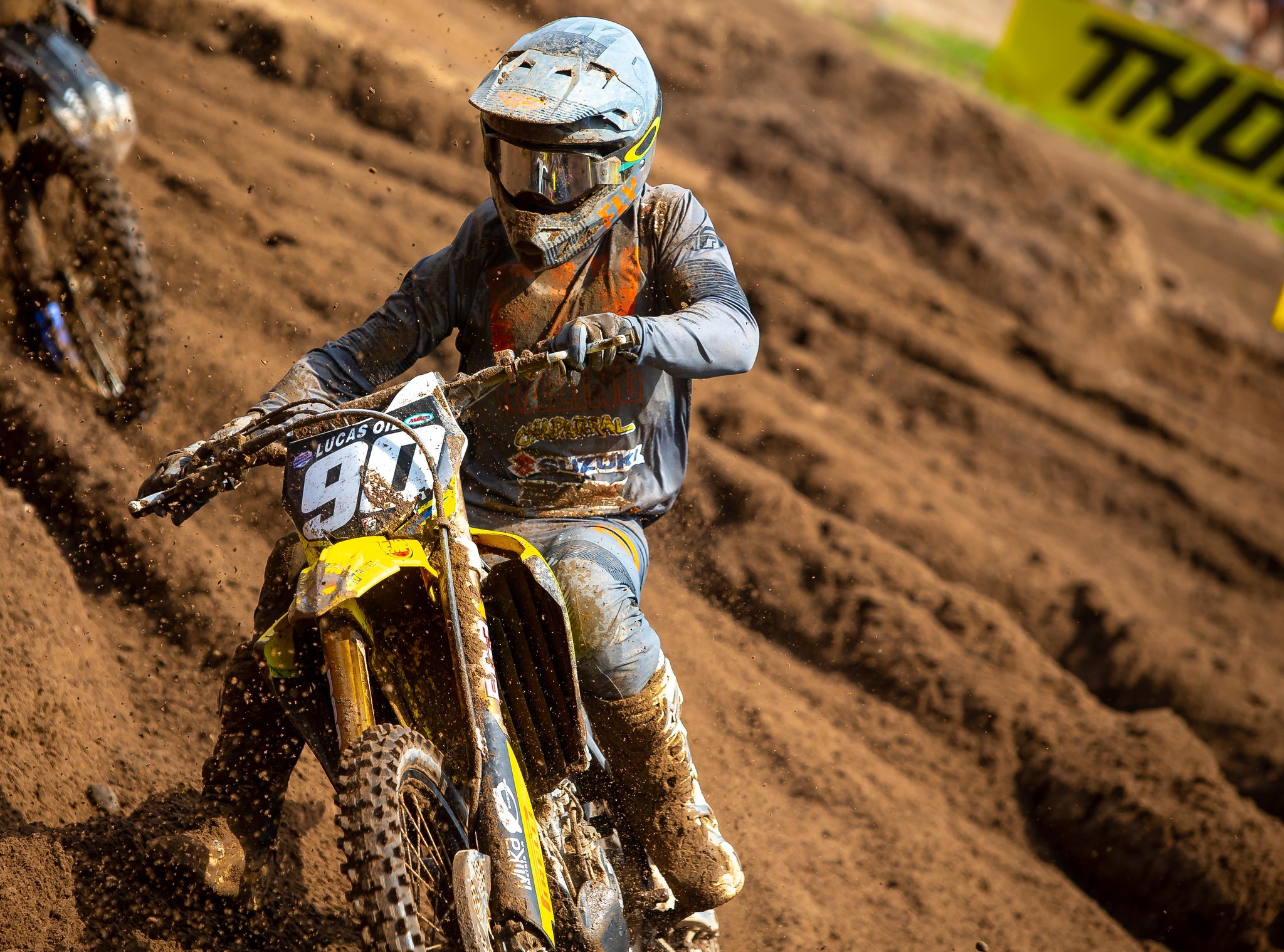 Dilan Schwartz (90) showed his determination and skill at Southwick on his Suzuki RM-Z250.

Also leaving knobby prints in the sand of the Southwick National for the first time, 250-class rookie Dilan Schwartz again brought the speed to be a front runner in the class. Unfortunately, some setbacks common to the racers at Southwick found Schwartz despite a hard-charging ride that saw him pass five riders in three laps in Moto 2.

"Southwick was tough," said Schwartz. "In the first moto I got a mid-pack start and got up to 13th, but unfortunately had an issue and DNF'd. In the second moto I got a slightly better start; I was running in about 13th place again then crashed. That dropped me back to about 20th, but I recovered and came back to 18th. Overall, it's not where we want to be, but we are learning every weekend."

The day after the Southwick race the clouds came again, but the Suzuki racers and team members were already preparing and strategizing for the Millville National, the mid-point race of the 12-round series. The steep hills of Millville present the next great challenge for the speed and talent of the racers and the precise handling and substantial power of the teams' RM-Z race bikes; the Suzuki racers are showing more strength and endurance at each round.