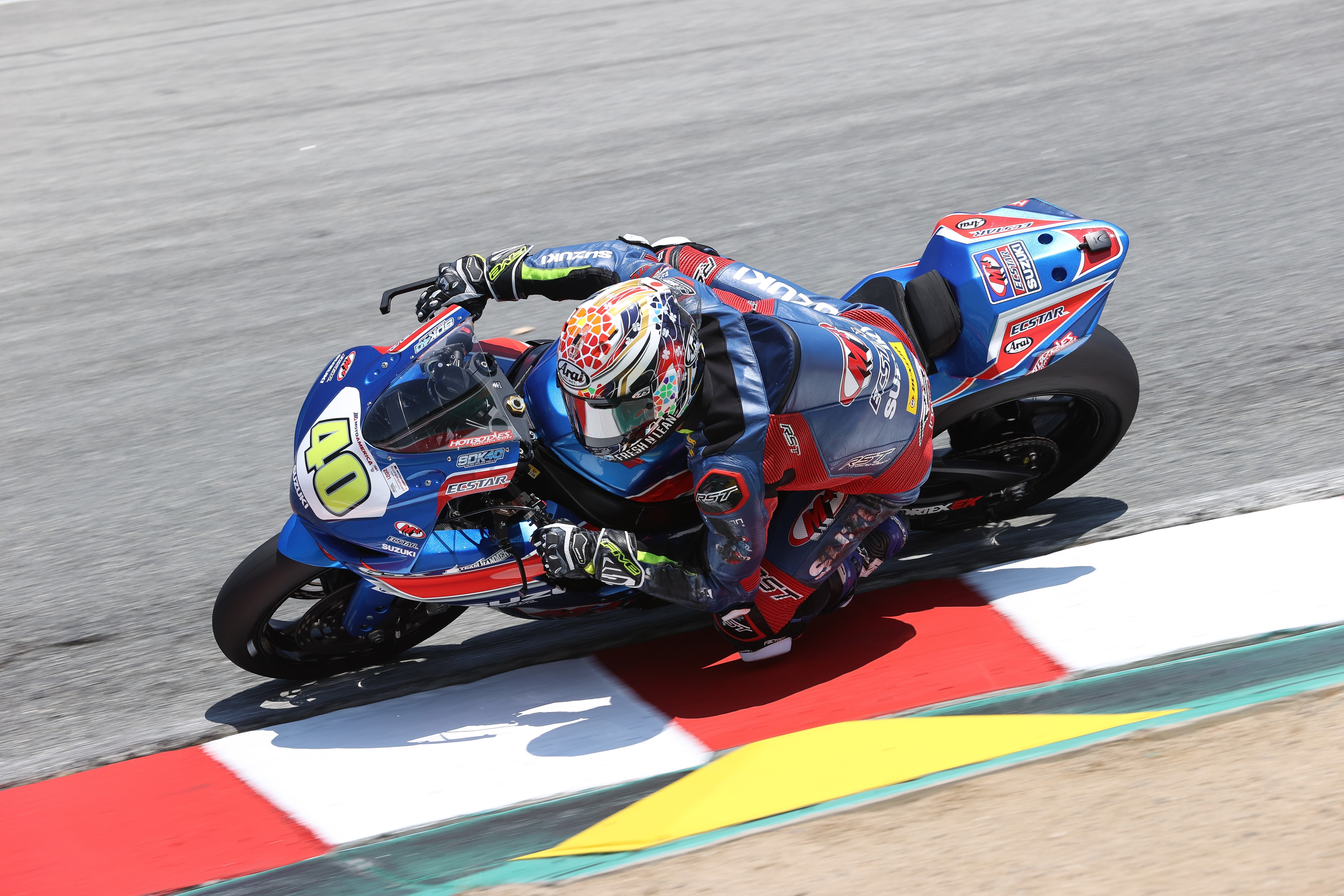 Sean Dylan Kelly was again at the front of the charge, assembling a second consecutive perfect weekend. Despite twice being confronted with a relentless challenge from his rivals, the 19-year-old pulled off a pair of tight victories aboard his M4 ECSTAR Suzuki GSX-R600 to up his MotoAmerica Supersport title advantage to an imposing 31 points.

For ‘SDK,’ the dominating weekend represented his second double win in a row, both in 2021 and at Laguna Seca. On Saturday, Kelly managed a fast pace despite closing off the traditional passing zones to any potential maneuvers. On Sunday, his rivals were even more aggressive, but the Floridian survived early attacks to consolidate the lead in the middle portions of the race and hold it until the checkered flag.

Reflecting on his seventh triumph of the season, Kelly said, “It was another hard race at the front, just like yesterday. It was a really close gap, and I just tried to be consistent. It came down to the end again and they were right on me. It was another one of those races where I had to play it smart and defend, and I think I played it exactly the right way.

“I’m really stoked. Thank you to my whole M4 ECSTAR Suzuki team -- this is amazing.” 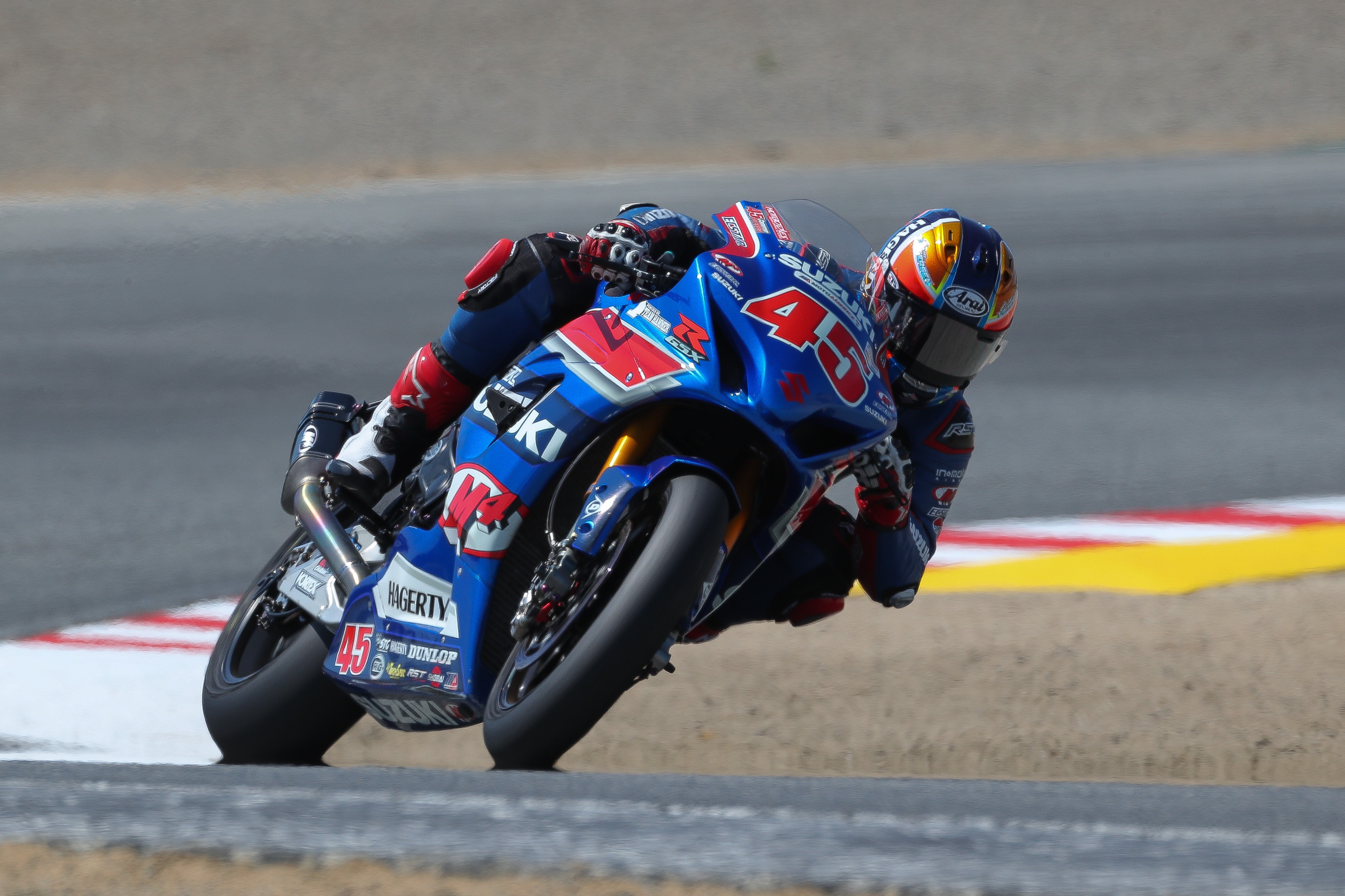 Cam Petersen (45) continues to impress with a third and fourth place finish on his GSX-R1000R.

Meanwhile, M4 ECSTAR Suzuki MotoAmerica Superbike ace Cameron Petersen put together another outstanding weekend himself. The South African further established himself a genuine podium threat in the premier class, adding his fourth top three in five races on Saturday. After a red flag, he jumped into third place and held it.

Petersen backed it up with a fourth-place ride on Sunday.

“Hats off to the M4 ECSTAR Suzuki team,” Petersen said following his Saturday third. “They keep working hard and keep giving me the best possible bike every weekend. That’s allowing me to show that I can do my thing and get on the podium in the Superbike class.” 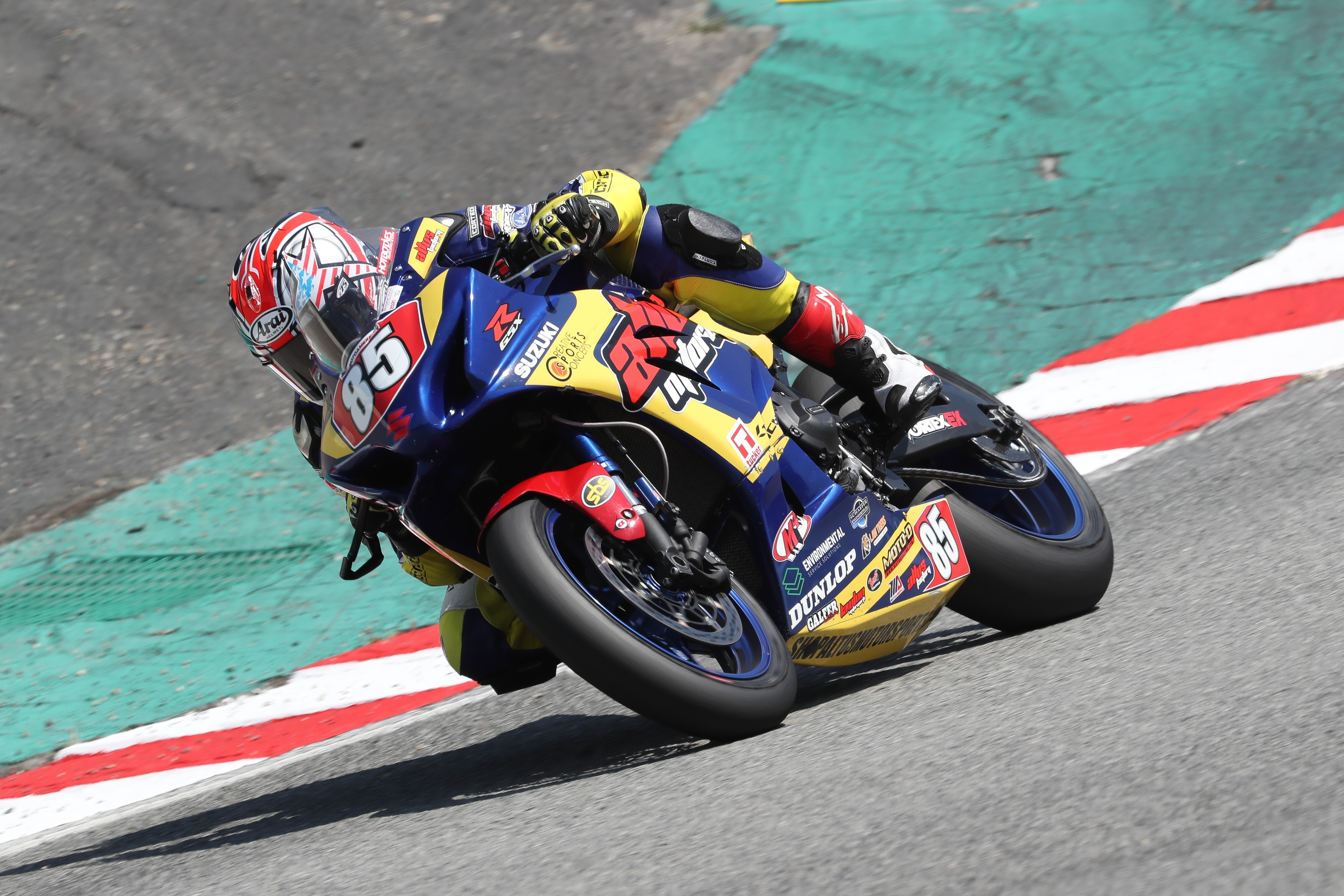 Stock 1000 championship contender Jake Lewis added a fourth podium of the weekend for the larger effort. The lanky Kentuckian dipped as low as eighth at mid-distance, but put in a spirited charge aboard his Team Hammer-built Altus Motorsports Suzuki GSX-R1000 in the late stages of the race to work his way into winning contention by the final lap.

Lewis ultimately finished third, just 0.286 seconds behind the win. As a result, he is now just 12 points off the title lead.

Lewis said, “It was my and the team’s decision to run the harder rear tire and I think we were the only one in the top eight running it. I just couldn’t get going in the beginning. They were smoking me. I just did the best I could, charged the whole race, and made some good passes. I wish I would have rewarded the Altus Motorsports Suzuki team with a win, but third is not bad. It was a good points weekend for us.” 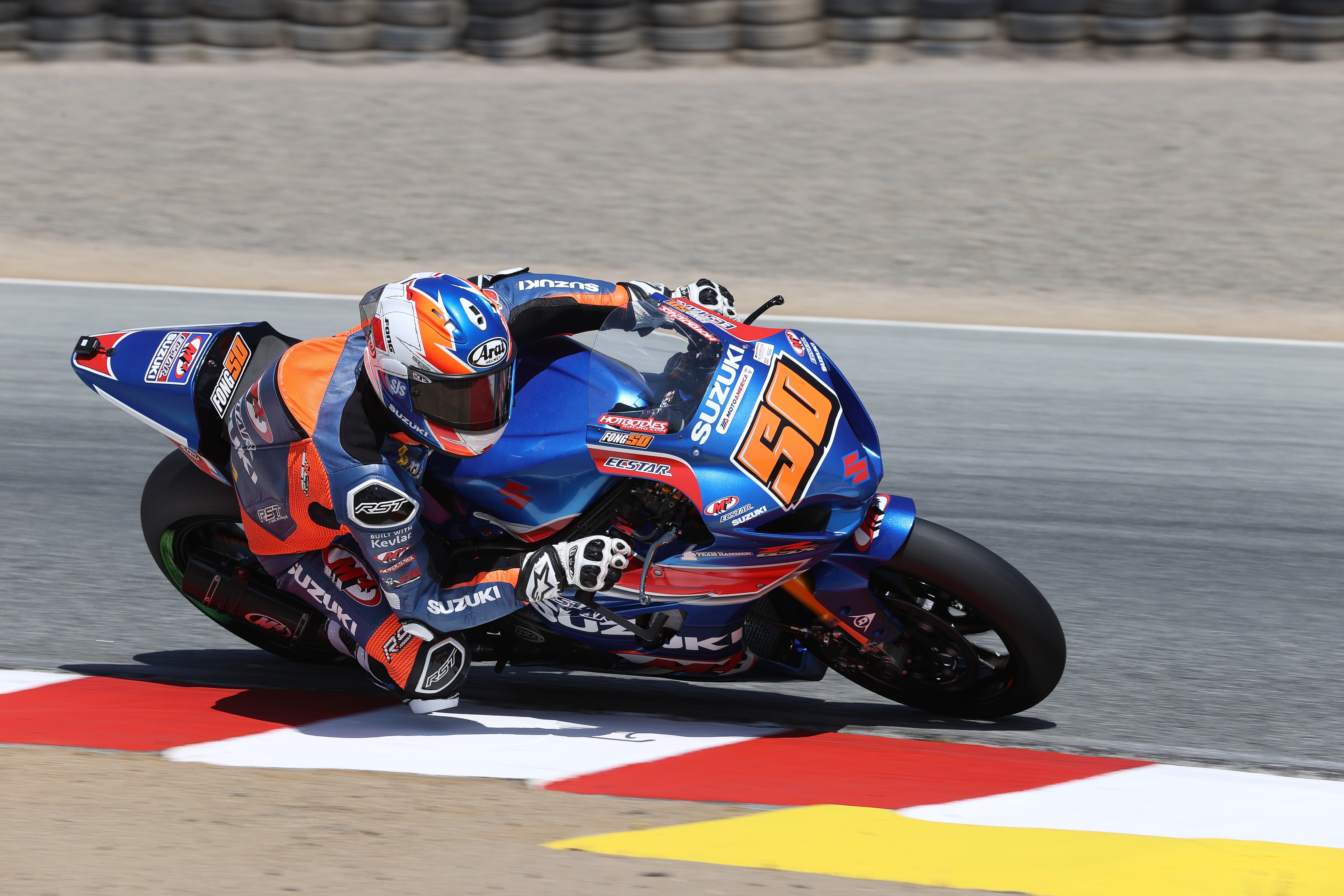 Sam Lochoff (44) maintained his 3rd place position in the championship with strong rides on his GSX-R600.

Meanwhile, rising star Sam Lochoff still ranks third in the MotoAmerica Supersport standings despite a tough weekend in California that saw him finish seventh on Saturday and crash from contention on Sunday. 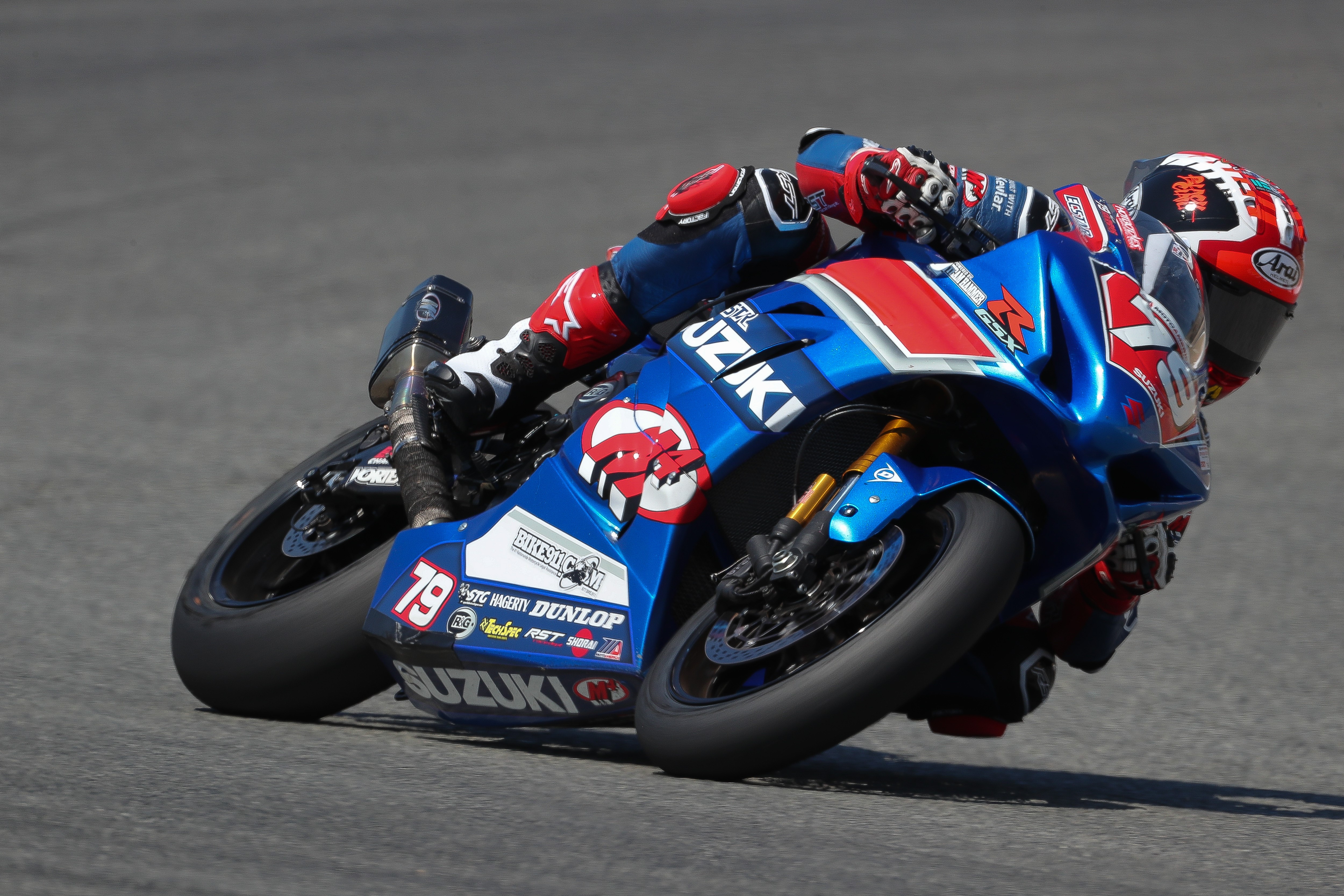 M4 ECSTAR Suzuki’s Wyatt Farris earned his sixth top-ten Stock 1000 result of the year with a run to tenth.

Team Hammer will next return to the Midwest with a long-awaited return to Brainerd International Raceway in Brainerd, Minnesota, on July 30-August 1.