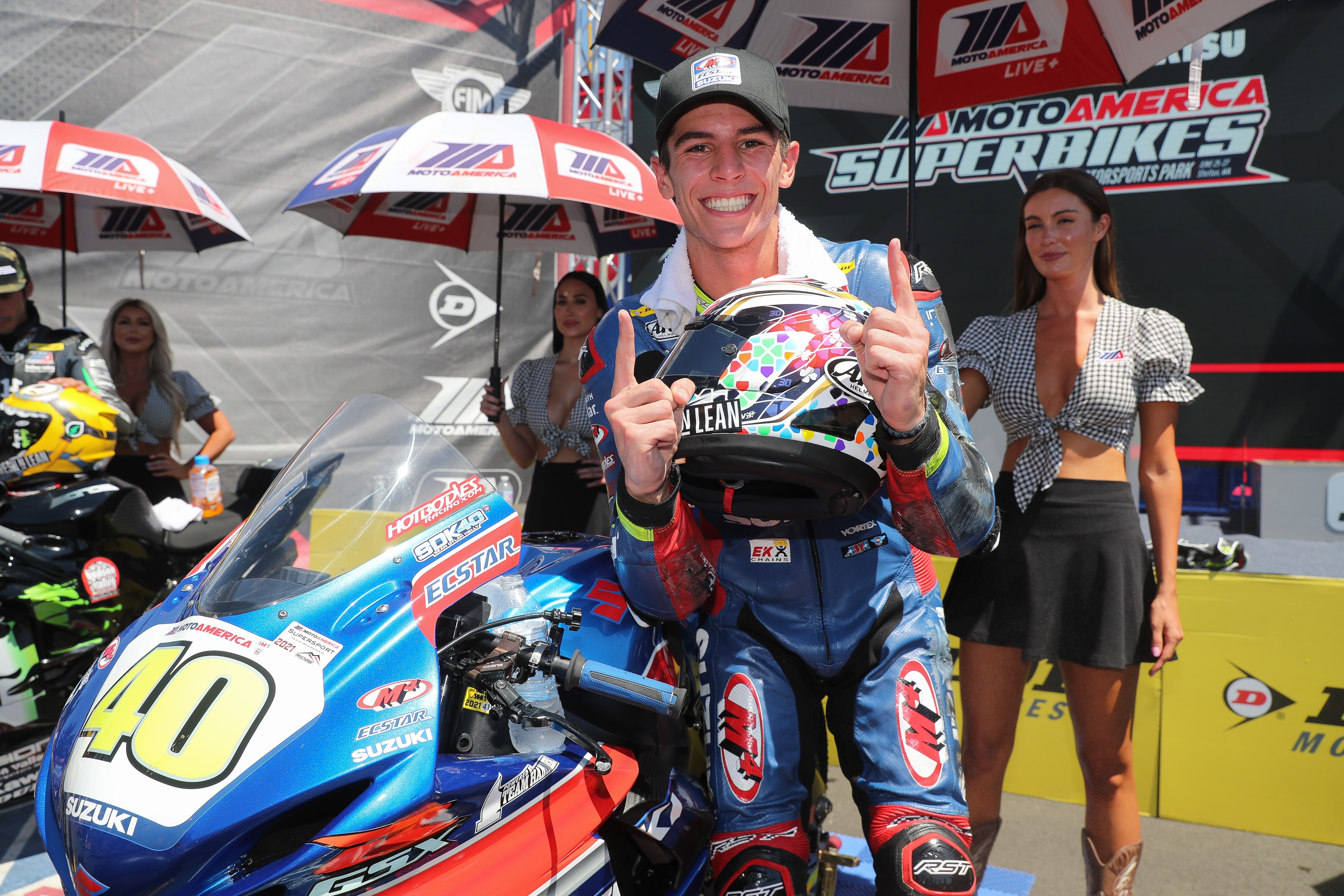 MotoAmerica Supersport title leader Sean Dylan Kelly and his M4 ECSTAR Suzuki GSX-R600 were more than up to the challenge presented by his competition and the relentless triple-digit temperatures.

‘SDK’ notched up another pole and then translated his one-lap superiority into a pair of critically important race victories. Sunday’s race followed the same basic pattern as Saturday’s with Kelly controlling from the front while remaining precise and in command despite the application of intense pressure from close behind all the way to the checkered flag.

As a result, the Floridian now boasts a 21-point championship advantage on the strength of the five-race wins he’s already earned in 2021.

“That was definitely a tough race… as if yesterday wasn’t tough enough!” Kelly said. “I went out and tried my absolute best and gave my all. It was a great weekend. We got pole again, set the track record, and won both races. We have to be proud of the job we’re doing. This feels amazing, but we just have to keep chipping away and keep our feet on the ground. Huge thank you to my M4 ECSTAR Suzuki team.”

Kelly was joined on the podium on both days by Salvadoran Kevin Olmedo aboard his Team Hammer-built Altus Motorsports Suzuki GSX-R600. 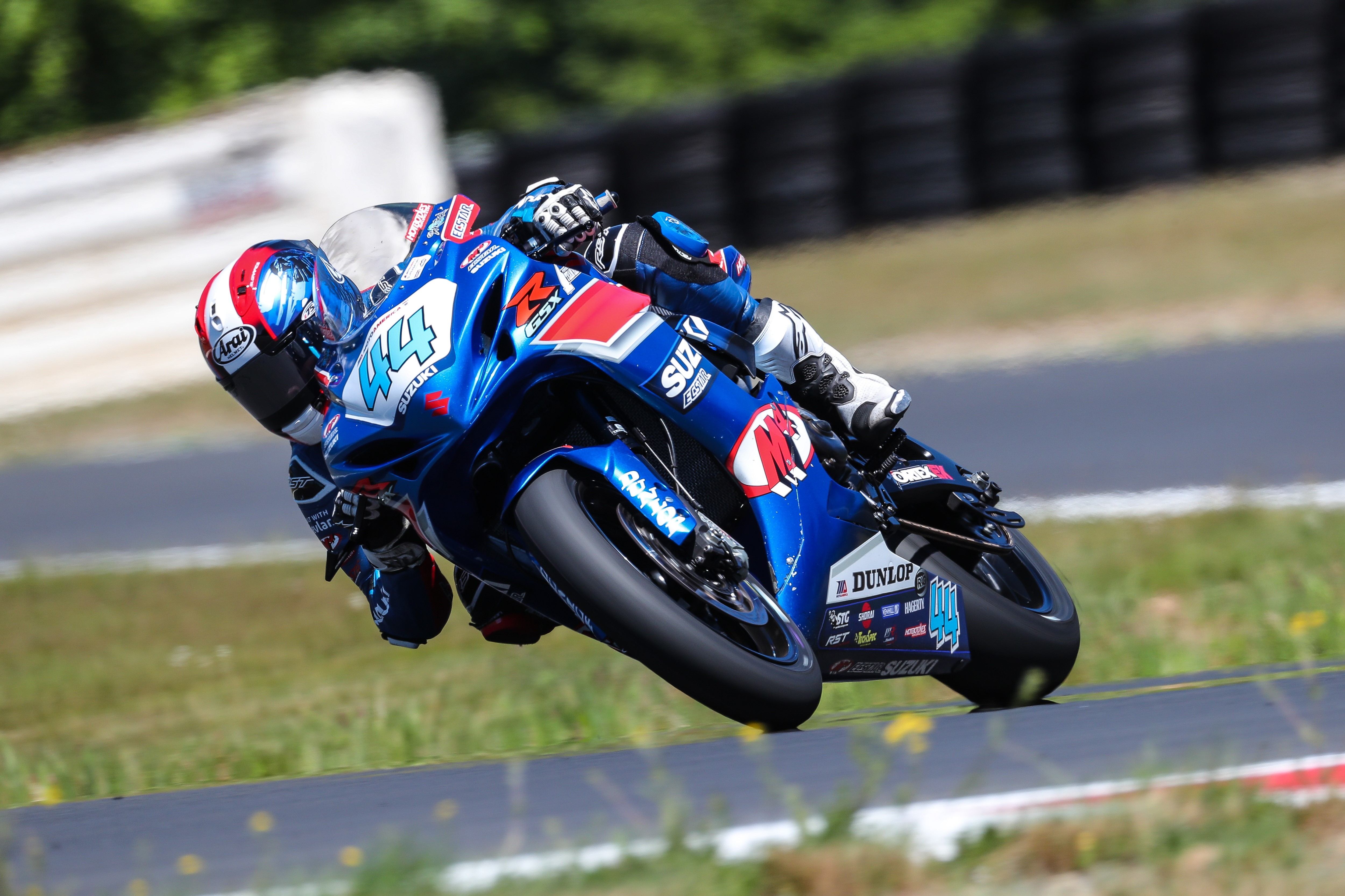 SDK’s M4 ECSTAR Suzuki teammate Sam Lochoff logged a pair of fourths to add to his impressive rookie MotoAmerica Supersport campaign. As good as that was, the South African came painfully close to scoring a second-career Supersport podium on Sunday, holding down third position until a last-lap off-track excursion opened the door for Olmedo. Lochoff now sits in third place in the Supersport championship points standings. 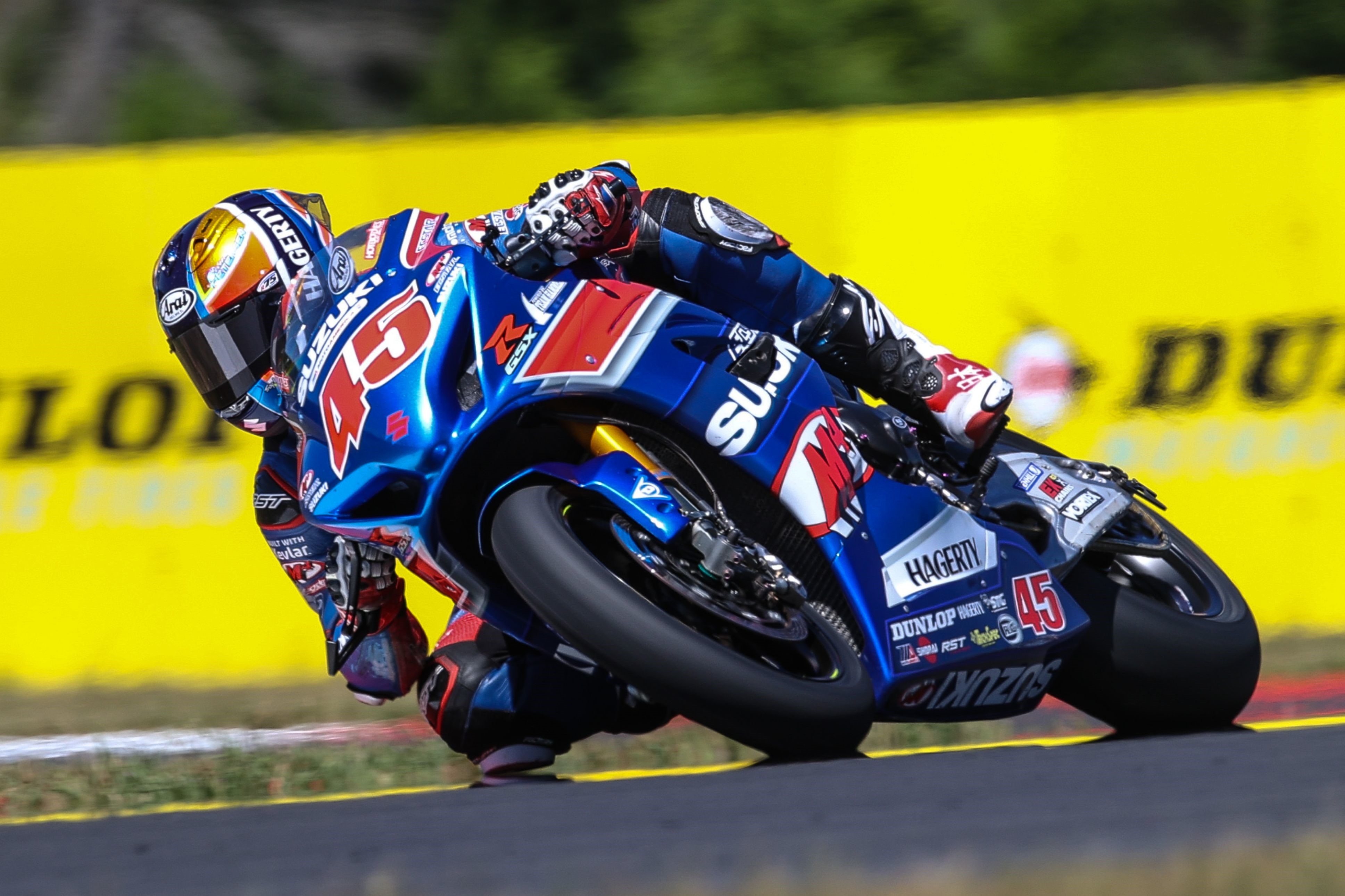 Outside of Cameron Petersen adding a third-consecutive MotoAmerica Superbike podium on Saturday, the weekend was one to learn and move on from in the premier class category.

Petersen was solidly positioned to continue his podium streak to four on Sunday before a fluke occurrence, a rear wheel speed sensor failure, forced him to slow and eventually accept sixth position. 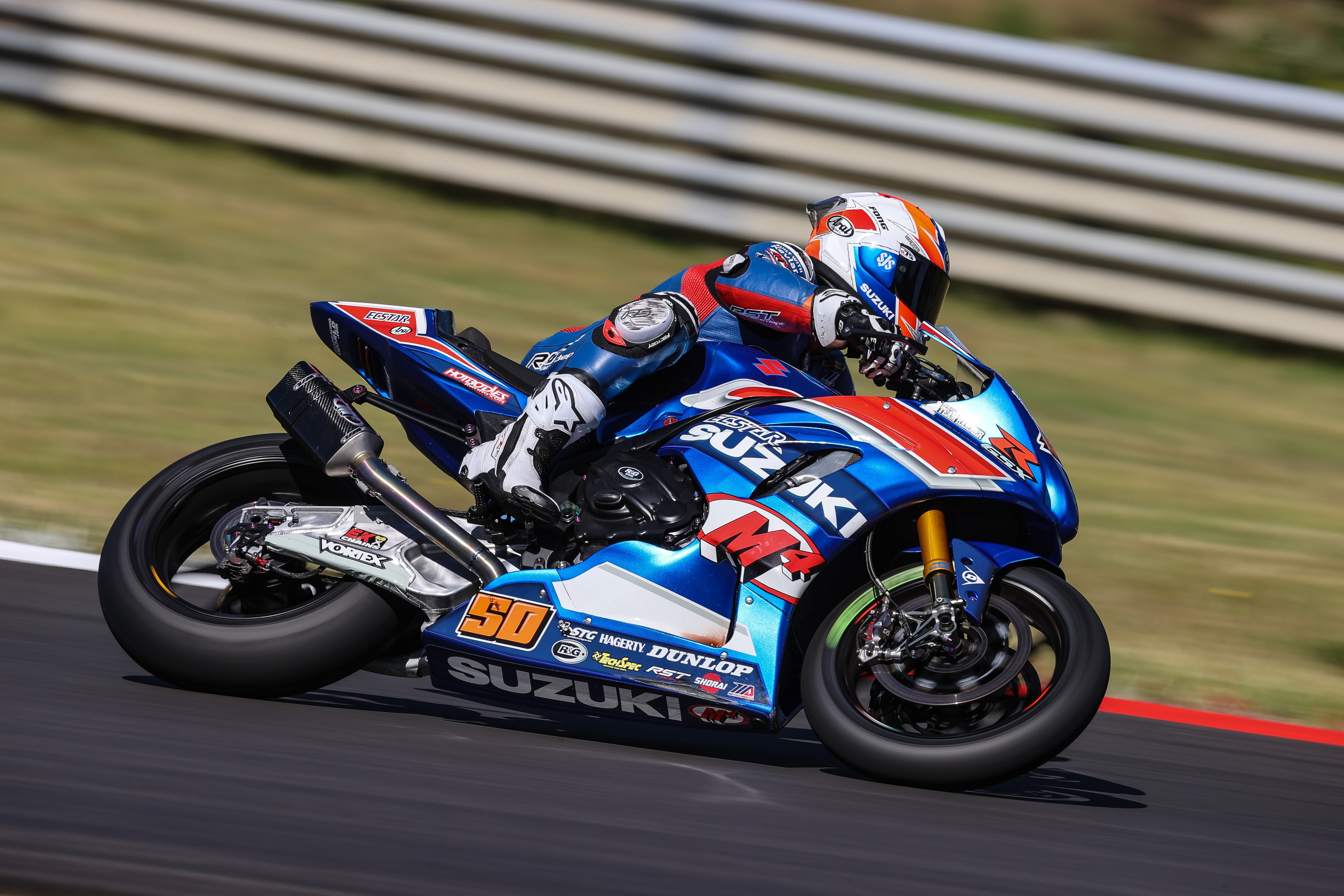 The round was even more difficult for Petersen’s M4 ECSTAR Suzuki teammate, Bobby Fong, who struggled after crashing hard and destroying his ‘A’ bike during testing on Thursday. Due to lingering issues from his testing fall, Fong lost feeling in his hand during both races. The gritty Californian pushed to his maximum in the blisteringly hot conditions yet was only rewarded for his efforts with uncharacteristic seventh- and eighth-place results.

“We’re trying,” Fong said. “Obviously, we’re trying our hardest over here. It’s not like I forgot how to ride a motorcycle, and we’re giving it our all. I don’t give up, I don’t quit. All the stars have to be aligned in Superbike racing, and we’re going to give it our best at the next round.” 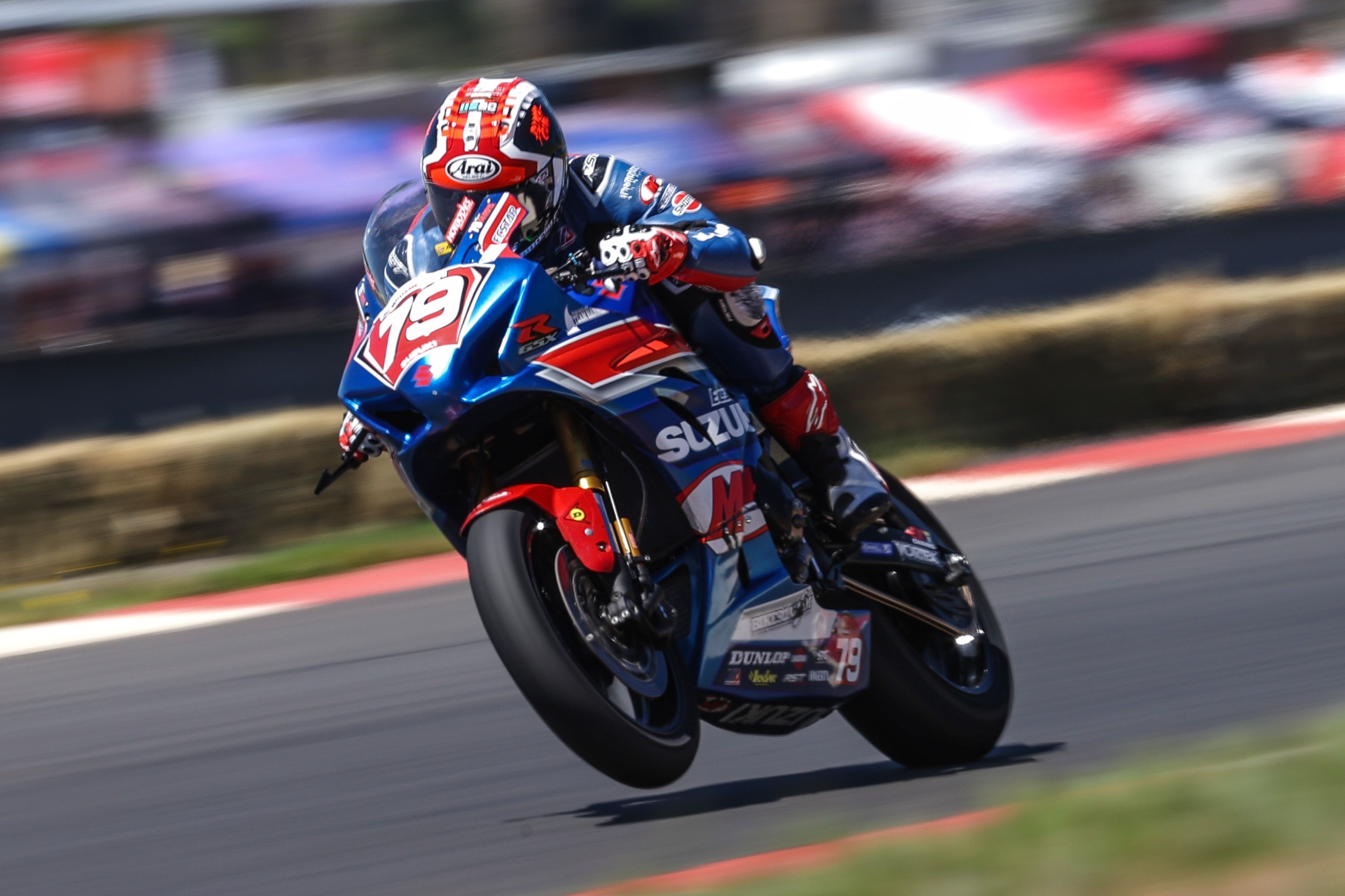 Wyatt Farris (79) continues to improve with two top-ten finishes in the Stock 1000 class.

Olmedo’s Altus Motorsports Suzuki teammate Jake Lewis remains within eight points of the Stock 1000 championship lead after claiming a runner-up result aboard his Team Hammer-built GSX-R1000 on Saturday. Unfortunately, a Sunday DNF more than ate up the title padding he had accumulated, but that padding also sees him still within striking distance despite his Sunday misfortune. M4 ECSTAR Suzuki’s Wyatt Farris finished ninth and eighth in the Stock 1000 races in Washington.

Team Hammer will remain on the West Coast for the upcoming MotoAmerica round at Weathertech Raceway Laguna Seca in beautiful Monterey, California, on July 9-11.