Brea, CA (January 18, 2021) – The Twisted Tea/H.E.P. Motorsports/Suzuki and BarX/Chaparral/ECSTAR Suzuki teams are currently posted up in Houston, Texas for the three-round stand that begins the 17-round 2021 Monster Energy Supercross season. Making his 450 class debut on Saturday night in a dramatic way, Brandon Hartranft launched his RM-Z450 ahead of 21 other riders off his first gate drop in the premier class. Hartranft's teammate Adam Enticknap posted strong starts and steady laps on his RM-Z450, and Texas native John Short kept his BarX/Chaparral/ECSTAR Suzuki RM-Z250 inside the top ten most of the night and showed the speed to run up front. 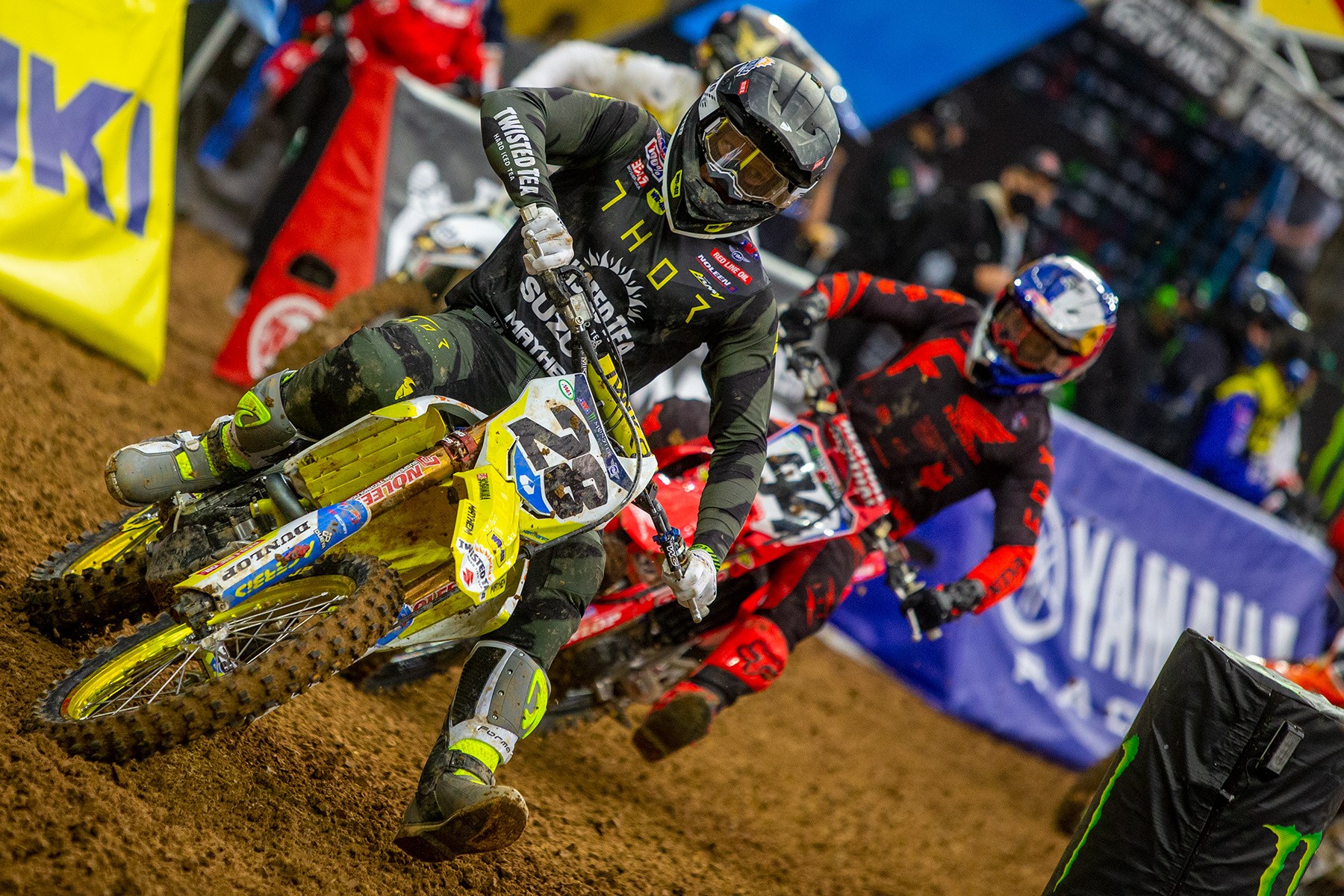 Brandon Hartranft (28) rode a strong race in his first 450 race with the Twisted Tea/H.E.P. Motorsports/Suzuki Team

Brandon Hartranft shot out of the gate in the premier class's second heat and reached the first turn in the lead. The 22-year old 450 rookie rode steadily from there amid the pack of veteran racers. Hartranft repeated his great start straight charge in the last chance qualifier, where he finished in second place. Unfortunately, Hartranft's start successes didn't carry over into the premier class main event; a mid-pack start had him battling to reach the top ten before contact with another rider on lap five put the young rider on the ground. With his work cut out for him, he put his head down and gained his first 450 supercross points.

"I'm happy to get my first 450 race out of the way, said Hartranft. "I felt solid all day and felt awesome in the main event, but got taken out shortly into it. I never gave up, though, and put in some solid laps. I definitely have a lot more to show so I’m looking forward to Tuesday." 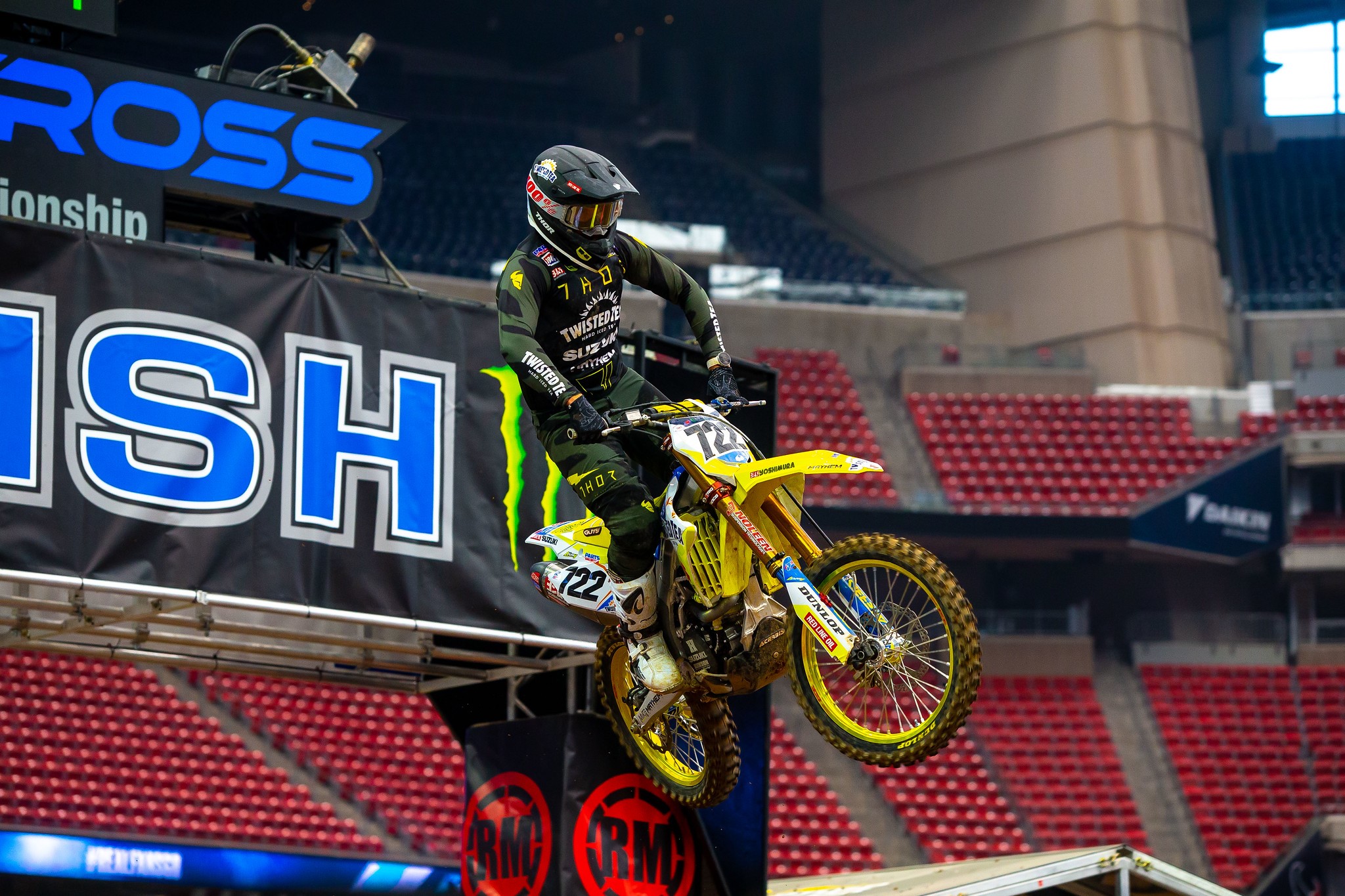 Adam Enticknap rode a solid and steady 2021 season opener in Houston. He finished right behind teammate Hartranft in the LCQ, then worked through opening-round jitters to put in a commendable main event performance.

"Opening in Houston was definitely a different atmosphere," Enticknap observed. "I felt more calm and less nervous. I’ve had a lot of good memories at NRG Stadium in the past. The day started out okay, not great, but not bad. As practice progressed throughout the day I started to feel the round one nerves! My starts were on point, and we made it happen. I'm excited to see what round two brings."

Max Anstie, who had a strong 2020 motocross season with the team and was looking forward to a great 2021 Supercross debut was sidelined just days before the Houston opener. Anstie will sit out the early rounds, but expects to turn heads and put his Suzuki up front soon. 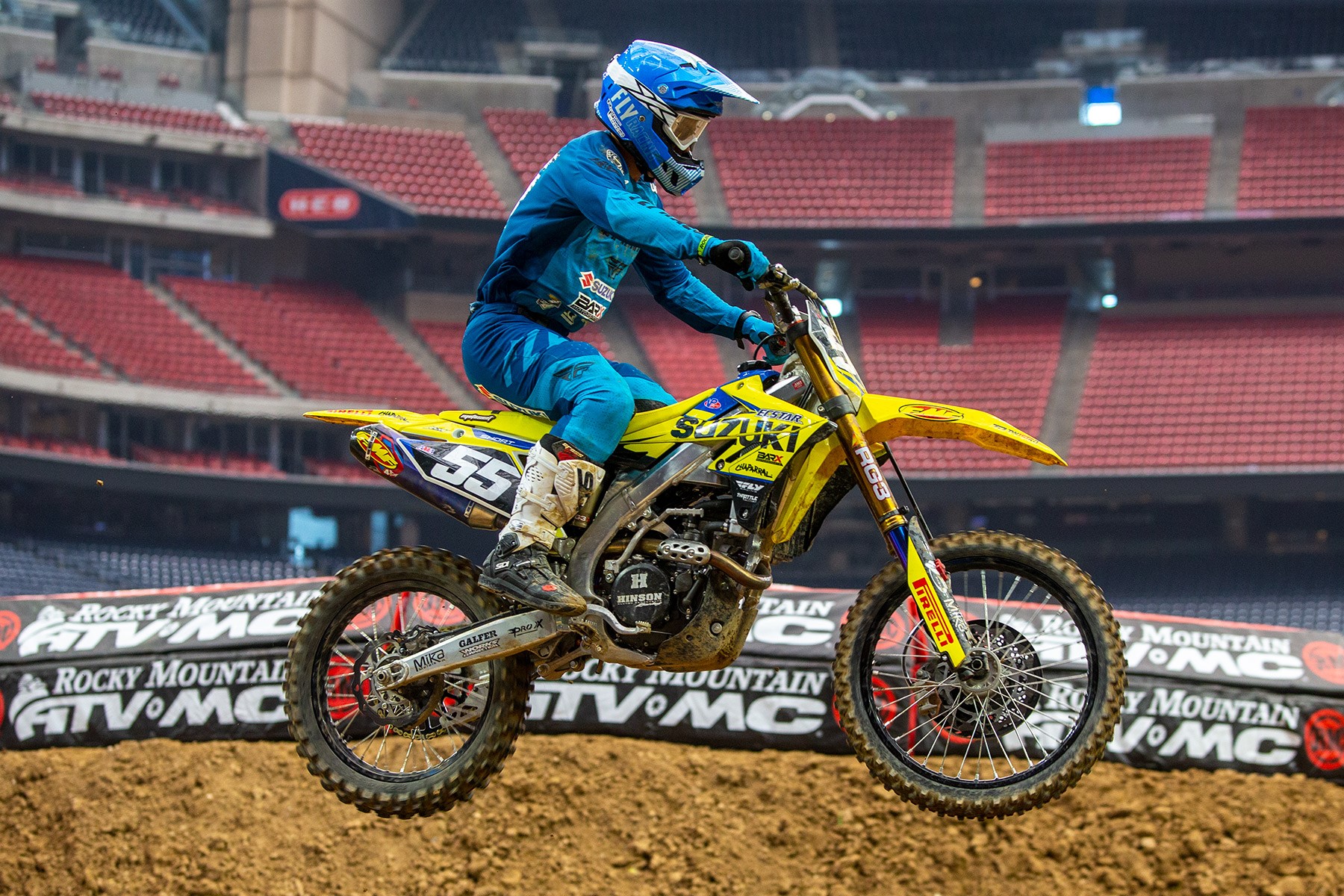 Joining the BarX/Chaparral/ECSTAR Suzuki team for the new year, Texas-native John Short came up just shy of a top ten finish in the Eastern Regional 250 class. After a direct transfer to the main from the first heat race of 2021, Short battled impressively through the 20-lap main event.

"Last night was a positive experience considering the limited time I’ve had riding the new RM-Z250 and working with the new BarX team. From where I started the day to where I finished was a real confidence booster. Every time I ride the bike I seem to get a little more confident, I think the RM-Z is a great fit for me. Last night was a good result to build off of. You never really know where you are until you go racing. I’m excited to try and continue to improve upon the 11th place finish as the series goes on."

"Everybody on the team was excited for the first race and everybody was prepared: mechanics, riders, everybody." Twisted Tea/H.E.P. Motorsports/Suzuki Crew Chief Clark Jones summarized. "The new race protocol in place makes things different, but we were all excited to get to race. The whole day went smoothly for our riders, both in the heats and in the main event. Everyone is looking to improve for the next race on Tuesday and looking forward to the rest of the series."

Chris Wheeler, Suzuki’s Racing Support Manager was happy to see both teams get off to a solid start. “Honestly, we were late getting both teams ready for the season so to see everyone get through the first round is a big positive,” commented Wheeler. “Each rider can build off their night and we are looking for everyone to improve.”

The pandemic lockdowns have required several changes to the supercross race series, including four Tuesday night rounds, and the Twisted Tea/H.E.P. Motorsports/Suzuki and BarX/Chaparral/ECSTAR racers and crew members are ready to bring home strong finishes throughout the seventeen rounds.