Brea, CA (January 25, 2021) – The Twisted Tea/H.E.P. Motorsports/Suzuki and BarX/Chaparral/ECSTAR Suzuki teams ripped through three supercross rounds in seven days to kick off a 2021 Monster Energy Supercross schedule filled with multiple double- and triple-headers. John Short and his Suzuki RM-Z250 had a stellar night with exciting on-track battles that landed him inside the top ten at the event and into the top ten in championship points. Suzuki RM-Z450 racers Brandon Hartranft and Adam Enticknap didn't achieve the results they wanted despite being in the mix battling for top positions. 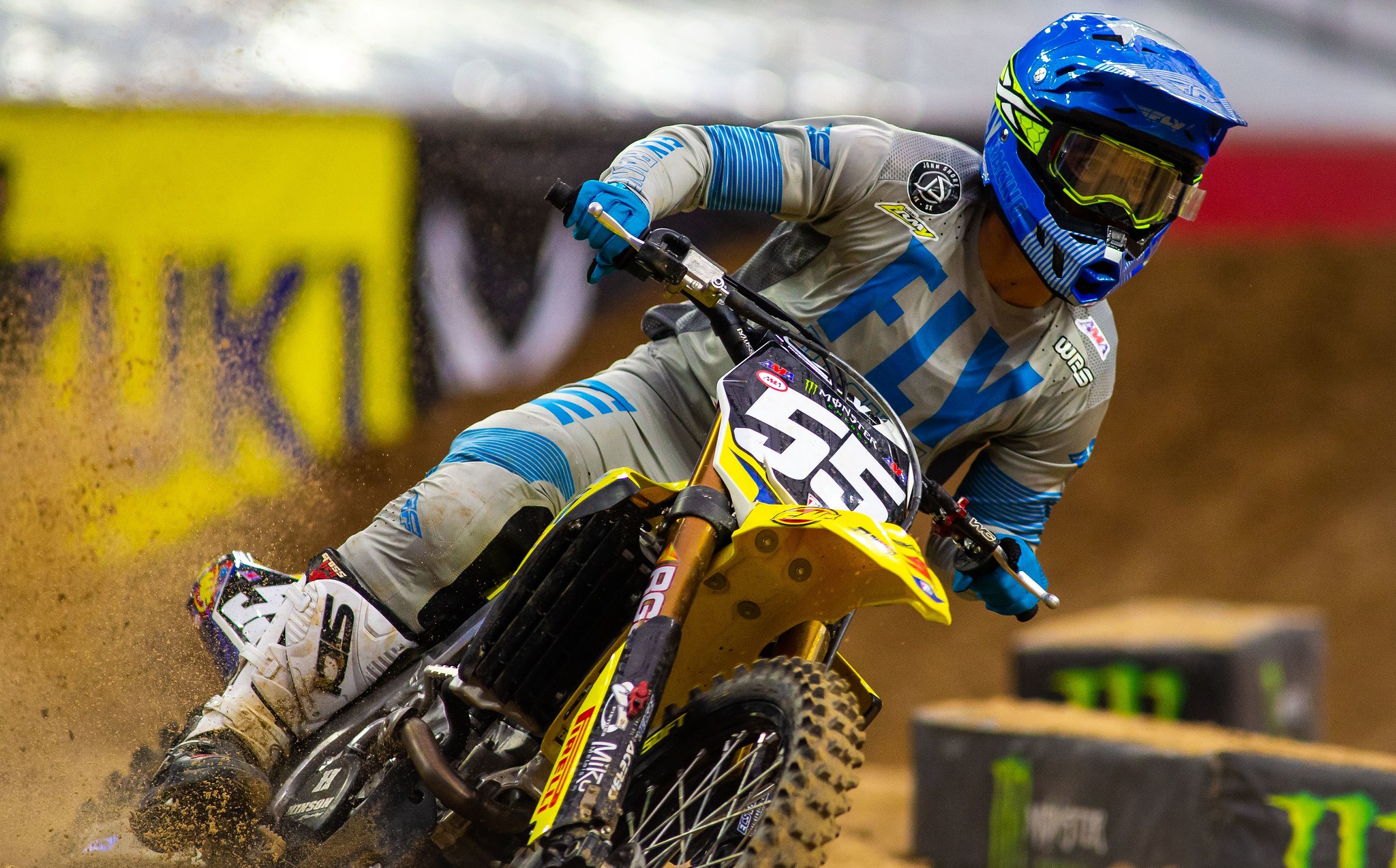 John Short and his BarX/Chaparral/ECSTAR Suzuki notched up the speed and kept their solid consistency at round three of the 250 East series. Short battled and finished inside the top five in his heat race and delivered again in the main with a well-earned eighth-place finish that moved him up two positions in the championship standings.

"The rhythm lanes were a little taller, and had deeper pockets and they got rutty. It was the first track of the year that had the time to be lost in the rhythms if you didn't hit your marks," Short observed. He added, "Normally, my times between when the track's rough and when it's smooth are about the same, so when the track breaks down I feel like it lends a hand to me." But getting a late-season change to race the earlier-starting 250 East series put Short a little behind with his training goals, "I had another rider right ahead of me for the whole main tonight. I passed him once and made a mistake before I could seal the deal. In the last six minutes I'm thinking, 'Just throw down two fast laps and you're gonna blow by him and you're gonna keep moving forward,' but I had to tell myself, 'Hey, be smart, just keep it on two wheels, you're fatigued.' I know as my fitness gets a little better I can do really well." 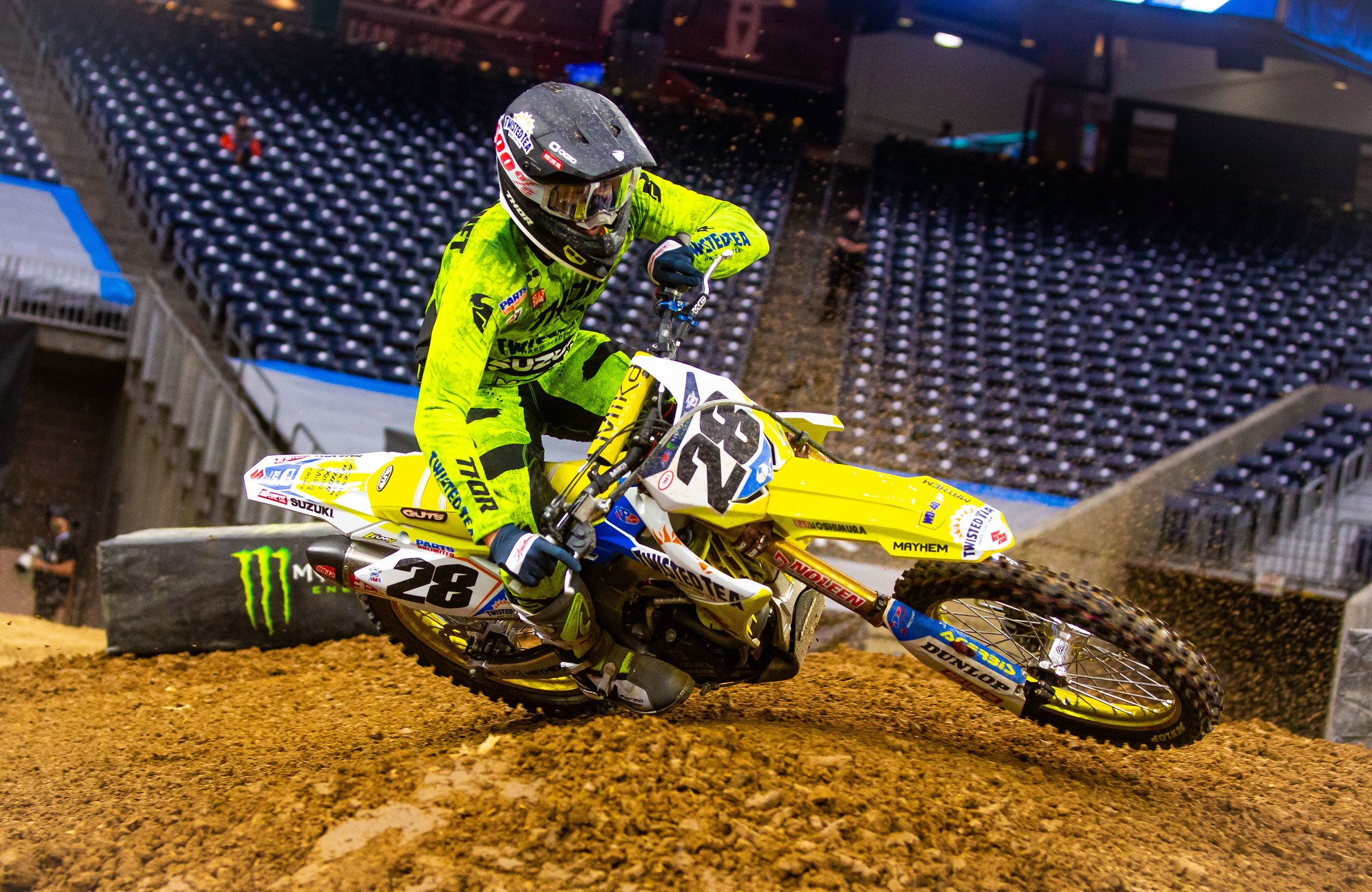 450 series rookie Brandon Hartranft displayed great speed in his heat race. The technical whoops section claimed many racers at Houston 3, and while running strongly in a transfer position the obstacle caught Hartranft. The tough racer remounted, but the mistake led to a poor last chance qualifier gate pick, and Hartranft wasn't able to turn it into a top finish even with his string of amazing starts this year.

"The track suited me a lot better today," Hartranft commented. "I was riding really well in the heat race. I think I was sixth or seventh when I went down in the whoops and then got hit by another rider. So I had to go to the LCQ with the last gate pick and just had a terrible start in the LCQ; I was fourteenth on the first lap so there's not much I could really do. I just have to take the positives away from the night and build for next weekend." 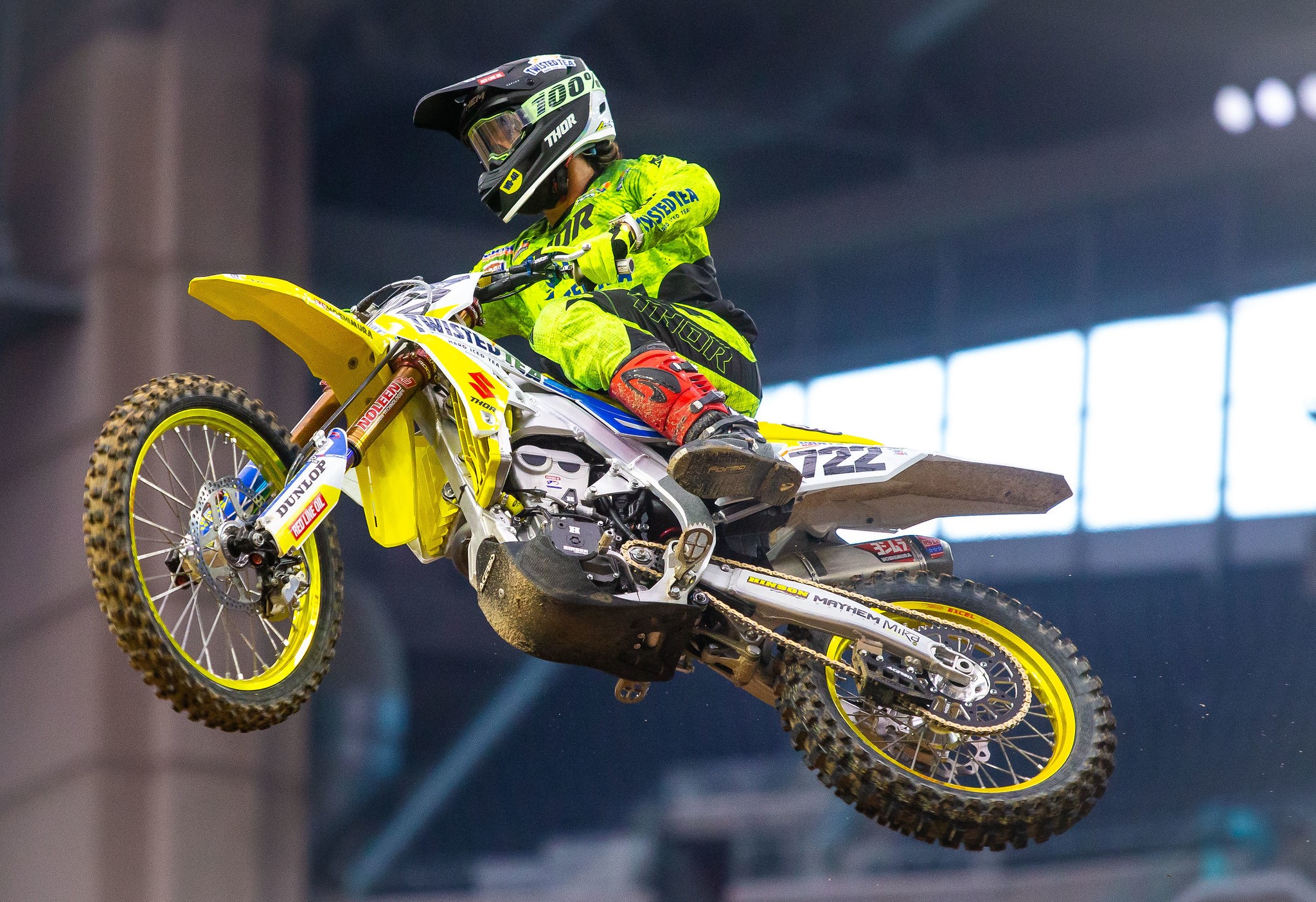 Despite not managing to land a transfer position on the technical track, Adam Enticknap rode strong at the third Houston round. The high-traction and steep, peaky obstacles took other riders out of the series with injuries; yet Enticknap rode smoothly to leave for Indianapolis healthy and strong.

"The Houston round three track was definitely more technical," confirmed Enticknap. "I had a decent-sized crash in the whoops tonight in the first qualifier, and that shook me up a little. But I got back and finished second. In the LCQ, I got a decent start and had some complications in the first corner and then just didn't get it done. I'm looking forward to Indianapolis and looking forward to another round, but there's definitely some stuff I need to work on this week and get my Twisted Tea Suzuki into the main event."

"The best thing about racing is that we get to do it again next week. That is what I am looking forward to most," said Twisted Tea/H.E.P. Motorsports/Suzuki Team Manager Dustin Pipes. "We're putting this past weekend behind us as a team, and look forward to performing to our expectations. There is a lot of drive and hunger underneath our canopy and those qualities will propel us forward."

The 2021 supercross series has adapted to current and future potential lockdown restrictions with a unique 17-round race calendar that sees multiple events in fewer cities than in years past. The Suzuki teams are geared up and ready to tackle the three Indianapolis races beginning on Saturday, January 30th and deliver strong races and top results through the entire championship chase.