Brea, CA (April 26, 2021) – The Monster Energy Supercross series returned to Rice-Eccles Stadium on Saturday night for the first event of the Utah double-header to cap off the 2021 season. John Short pulled in a top ten finish in his return to racing aboard his BarX/Chaparral/ECSTAR Suzuki RM-Z250. The Twisted Tea/H.E.P. Motorsports/Suzuki riders also put in strong performances at the high-elevation venue with 450 class rookie Max Anstie matching his career-best 450 supercross finish with his Suzuki RM-Z450. Teammate Brandon Hartranft put his Suzuki RM-Z450 straight into the main event and Adam Enticknap showed speed and comfort on his Suzuki RM-Z450 on the tight track as the season draws to a close. 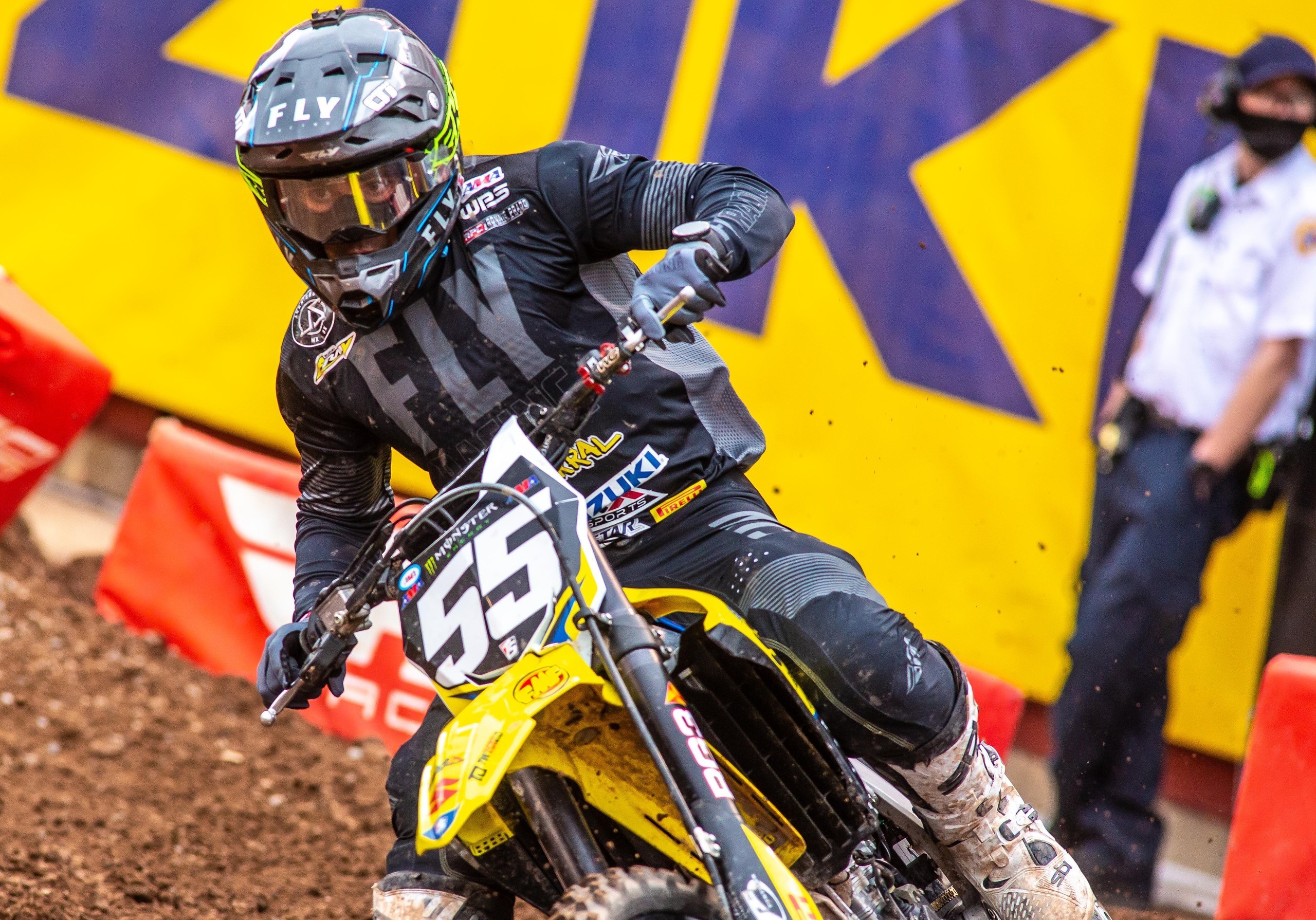 With John Short missing the two previous East Coast race nights before the division took a ten week break, the young racer waited 81 days since his first turn crash at the second Indianapolis race to add to his championship points on his Suzuki. The young racer made a strong return, starting with an exciting battle in his heat race that netted him a podium finish and with that a great gate pick in the main event. Short had a rough start to his main event; an early tip over shuffled him back on the opening lap outside of the top 20. But John Short was the rider on the move. Short tore through the pack, sometimes making multiple passes on a single lap on the deceivingly slick Utah soil. His hard work paid off with a top ten finish and proof that he has the speed for even stronger finishes. Interestingly for race fans, Short was featured on the popular Race Day Live pre-race show for his involvement with the MotoVated education program that uses his race season stats and results as a learning experience for students in Delta, Utah.

"It’s been a while since I’ve been at the races and it was exciting to be back in the stadium and be around the whole supercross environment," said John Short after the racing. "I felt good on the bike and I was very motivated to do well in the main event. Unfortunately, I had a small crash in turn two in the main and I put myself in a position where I was racing from the back. I raced hard and tenth place was what I was able to do last night. I’m very grateful to be healthy and racing my RM-Z. I’m looking forward to the showdown next weekend." 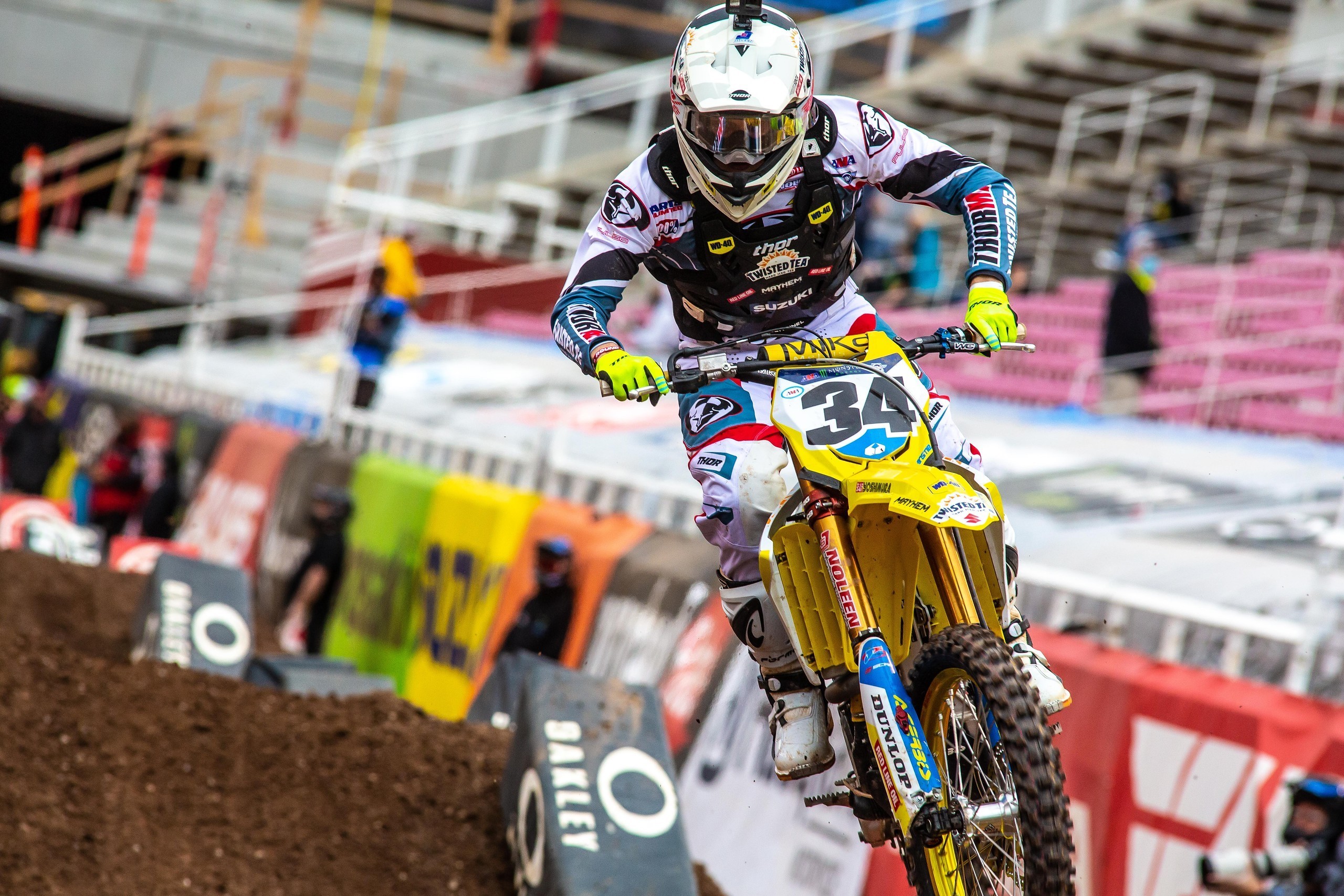 Max Anstie put in a strong performance acclimating not only to the 4,637-foot elevation, but returning back to the confines of a tight, short, stadium supercross track. After rounding the first lap of his heat race outside of a transfer position, the Englishman put his RM-Z450's power into the soil and quickly passed his way forward to earn a ticket to the main event. In the main event, Anstie got a mid-pack start but wasn't able to make the same progress he'd delivered in his heat race. Anstie managed to match his season best finish and is ready for the final supercross round before getting back to the more-familiar outdoor motocross racing of the summer.

"Salt Lake went well." Anstie went on to observe, "I felt like I was riding strong. We made progress all day and the team did a great job setting the bike up for the altitude. Each time out there I'm getting some good laps in and we'll continue making progress. I definitely feel like now, going into this last race, we're ready to go and have a good battle with the guys. I'm looking forward to being back here in seven days." 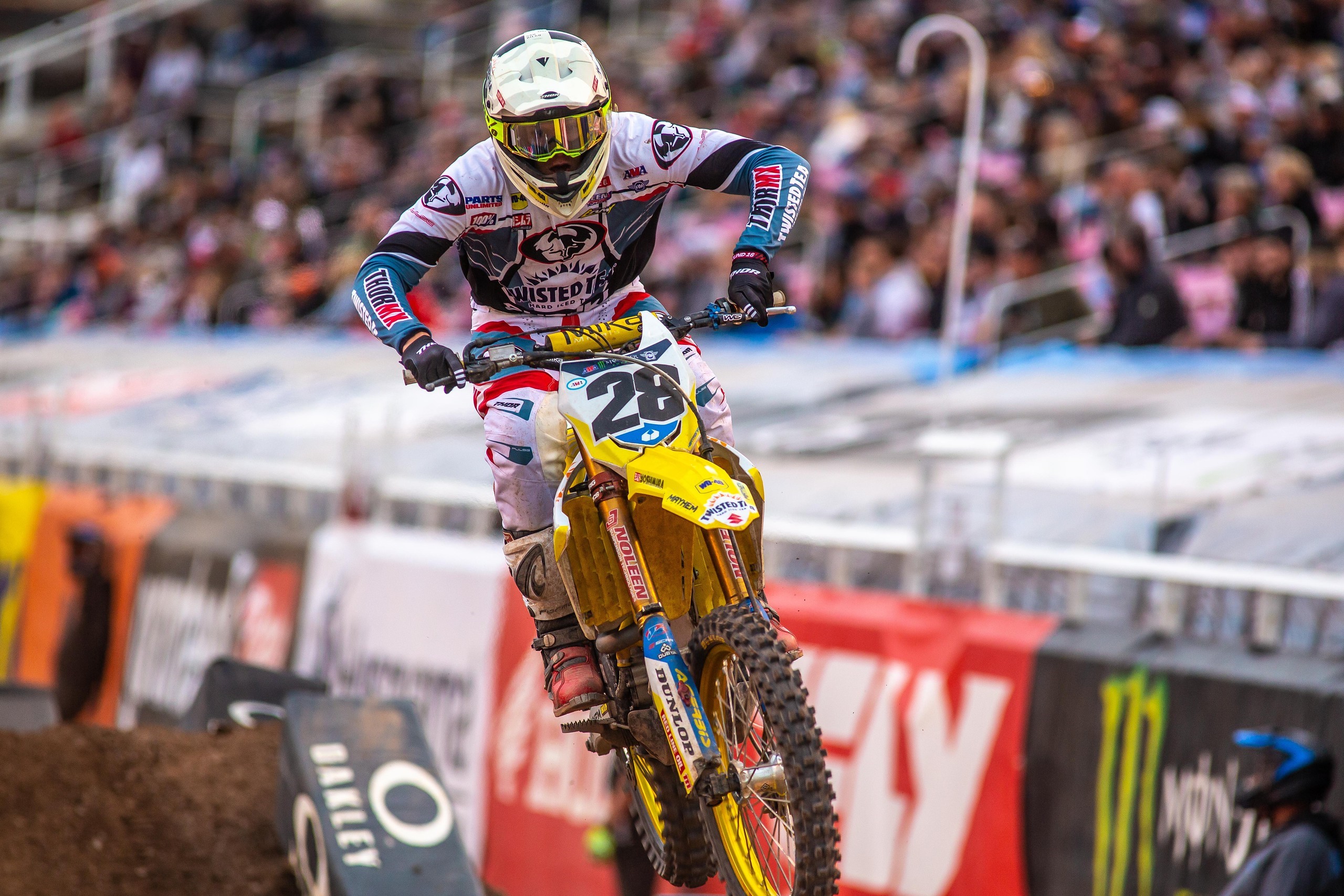 Brandon Hartranft backed up his return to racing the prior weekend in Atlanta with an improved finishing position finish in Utah. Although he transferred directly into the main event from heat race one, he was unable to put his Suzuki RM-Z450 up front down the start straight of the main. Hartranft managed a few passes early in the race, but was unable to deliver his best finish of the year despite running strong in the high altitude conditions.

"From practice one all the way to the main event it was a lot better day today," Hartranft said in comparison to the previous round. "I was hitting the whoops nicely. In the main event the track was really gnarly, especially the whoops. The high altitude made breathing a little harder, but all in all it was solid day." 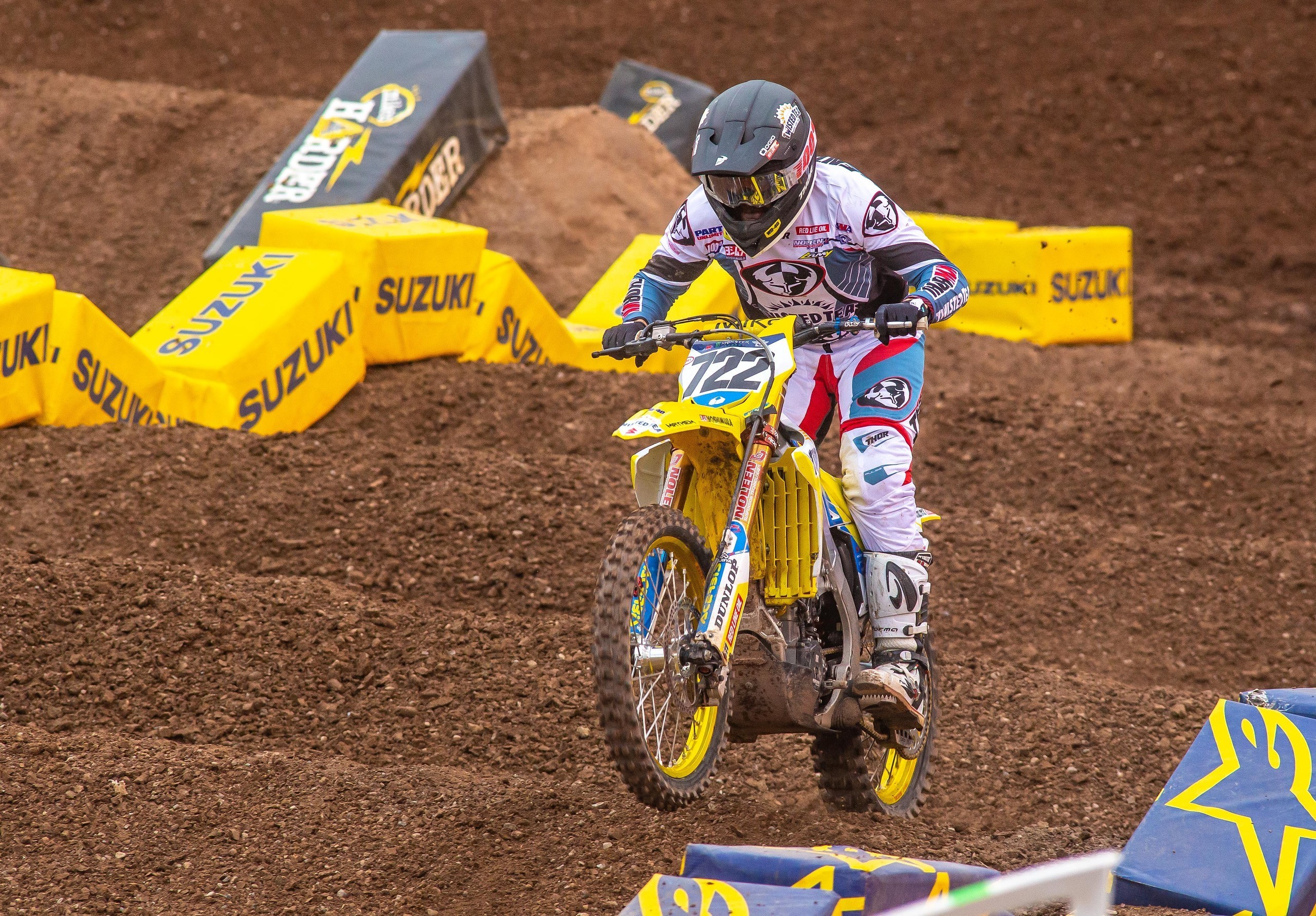 Popular 450 class veteran Adam Enticknap was at the edge of a direct transfer in his heat race, then faced a bad start in the LCQ to end his night early despite his aggressive style on the short-lane track. The likable personality was not able to deliver his best race showing during the race broadcast that covered him in "The GOAT Knows" feature, sharing his music including his song "My Bikes [sic] Too Lit," which he explained is about how excited he is about his Suzuki RM-Z450 race bike.

"I felt they made some good changes on the bike for the altitude and I felt the whole team made a good effort to get it to a good place." Then Enticknap described the tiny mistake that affected his night, "In the LCQ I had a little mishap on the start. I revved the bike too much and didn’t get away from the gate cleanly. That was pretty much the end of my day."

"It was a good week in Salt Lake," Twisted Tea/H.E.P. Motorsports/Suzuki Team Manager Dustin Pipes commented. "Max had some of his best laps yet; we qualified well. We were as high as fourth on the board. That was a great sight to see. Max definitely stepped up his pace. In the main we were pushing towards a top ten and just got a little bit tired out there, but that's what happens when you are trying to push the pace and go to the next level; I'm proud of Max for doing that. For Brandon, it was good to get him through the heat and he's starting to qualify a lot better as well. I think he's really going to hit his stride during the Outdoors. Adam just needs to get off the line consistently better. Once he does that, he'll be putting himself in a position to do well. I look for him to end out the series with a good result."

The Suzuki racers have one round remaining in the 2021 supercross season, set to take place again inside Rice-Eccles Stadium next Saturday night, May 1st. The 450 riders will face a traditional event while the 250 racers will combine divisions in the always-exciting Dave Combs Memorial East/West Showdown.

To learn more about the educational program surrounding John Short's racing, please follow the group on Instagram @motovated and on Facebook @MotovatedEducationProgram. For more information about the teams, the riders, and to keep up with the racing beyond the supercross series when the motocross series starts up, please visit SuzukiCycles.com/Racing and HEPMotorsports.com.