Brea, CA (January 20, 2021) – The Twisted Tea/H.E.P. Motorsports/Suzuki and BarX/Chaparral/ECSTAR Suzuki teams battled hard at the second round of the 2021 Monster Energy Supercross series inside NRG Stadium in Houston, Texas. The Tuesday night event was a first for the series and the second 450 race for class rookie Brandon Hartranft on his RM-Z450 race bike. Teammate Adam Enticknap had great moments on his Suzuki RM-Z450 on the Texas soil, but not the result his speed could have delivered. 250 class racer John Short and his Suzuki RM-Z250 spent most of the main event embroiled in intense battles that promised more great rides in the season ahead. 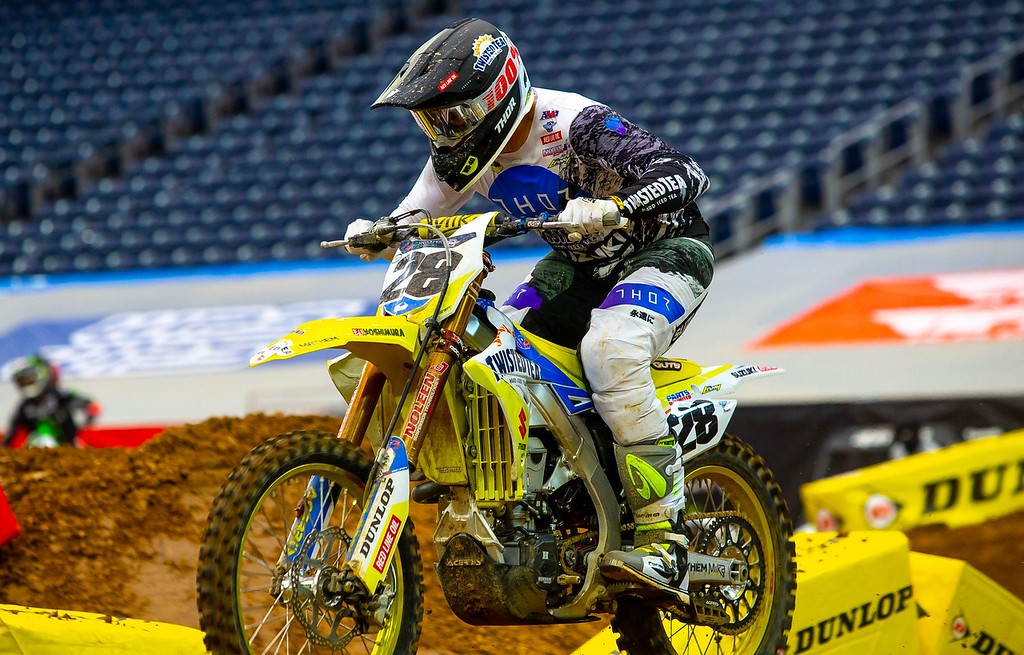 Brandon Hartranft started his night with another great launch off the gate, but a tangle in front of him exiting the first corner dropped him back enough to miss out on a direct transfer. Hartranft’s last chance qualifier start kept true to his ability to put his Suzuki's power to the ground when he raced ahead of the pack to the first corner. A bobble mid-turn was enough to lose the lead, but he held rock steady in second until the checkers. Hartranft had a problem early in the main, but climbed steadily as he clicked off fast, consistent laps.

"In the LCQ, I ripped a holeshot and then just dropped back to second," Hartranft said. "In the main event, I had an outside gate pick and actually had a killer start, all my starts were good, but I just need to be more aggressive off the first few laps. About five minutes into the main event, I jumped off the track and kind of lost my flow until six minutes to go. I've got a lot to learn and a lot to prove so I'm looking forward to Saturday." 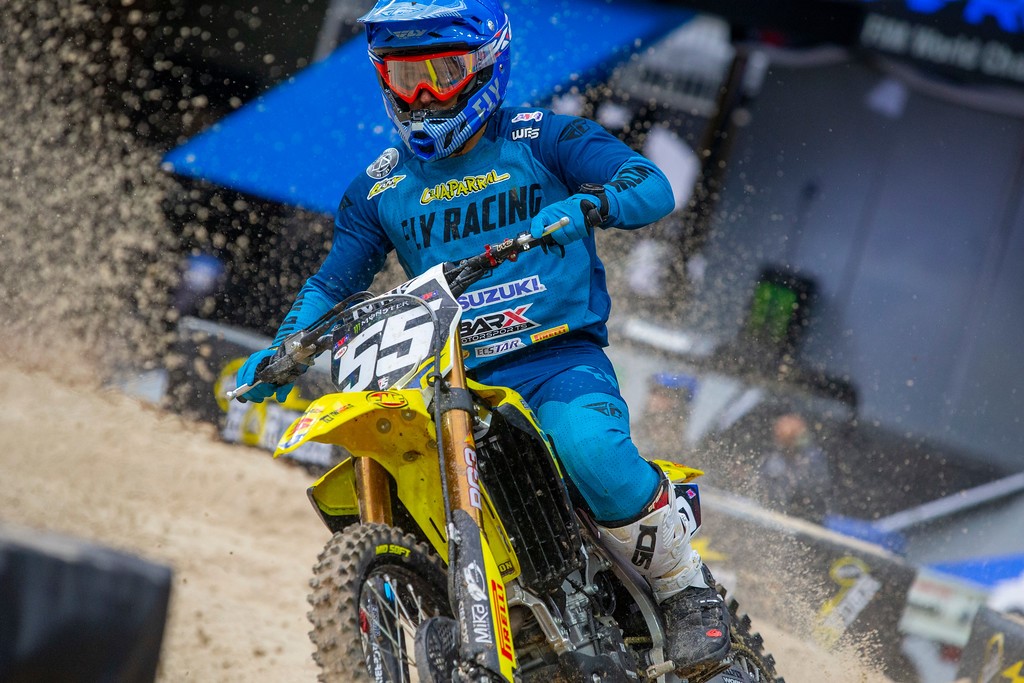 BarX/Chaparral/ECSTAR Suzuki rider John Short put in two great rides in Houston. In his heat race, a mis-timed jump off the gate had him in 16th place coming out of the first corner. Short put in a fierce charge and climbed immediately into the top nine for a transfer to the main. The main event was a battle from start to finish as Short fought for a spot inside the top ten, at one point making a miraculous save in the tricky whoops section. Short seemed to have landed a top ten finish at the checkers but a scoring adjustment netted him 11th on the final results sheet.

"Tonight was another solid night." Short went on to say, "It’s good to get another consistent ride to build confidence as the season progresses. I had a few close calls tonight at Houston 2, but I’m glad to keep it on two wheels and continue building momentum. Tonight was a step in the right direction." 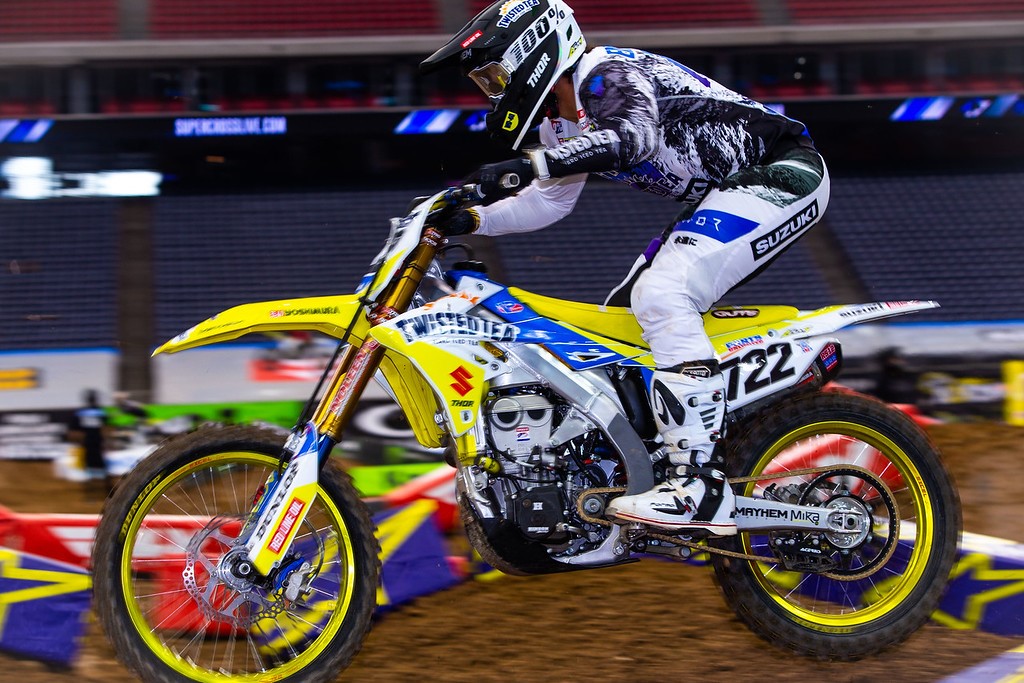 Houston 2 was a day of progress for Adam Enticknap and his RM-Z450. Unfortunately, one mistake on the opening lap of the LCQ dropped the Twisted Tea/H.E.P. Motorsports/Suzuki rider out of a realistic position at a transfer.

"I got out of the gate strong in my heat race, but I caught handlebars with Malcolm Stewart." Enticknap explained, "In the LCQ, I had about a fifth place start then made a nice block pass. I had to double the triple and heard a rev behind me. I went to scrub the double out and hit a little rut, and it put me just enough off line that I couldn’t stay on the track. The high notes from the night are my starts are better, my riding's better, my racing's better, but I can't give away those main events like that because I deserve to be there."

"The track conditions were tough; the dirt was really grabby." Team Manager Dustin Pipes said, "I felt like our suspension was good all day. The team did a great job on the chassis and set-up. Unfortunately, the results didn't really show on paper. Brandon did get better, but we're going to need a little bit more out of him. That's the good thing about there being so many races this close, he has a chance to make this race forgettable, and I think that's achievable because he has the talent. Adam needs to put himself in a better spot to do well and with the way our bikes are starting, I think we'll get that all sorted."

The series hosts one more race inside NRG Stadium in Houston this Saturday, January 23rd before making the trek to Indianapolis, Indiana. The Suzuki race teams are looking forward to posting strong scores before leaving the Lone Star State and building on these opening rounds over the 17-race series.