Brea, CA (March 17, 2021) – The second Supercross race inside of four days in AT&T Stadium in Arlington, Texas put the riders to the test and Twisted Tea/H.E.P. Motorsports/Suzuki's Max Anstie responded with some of his strongest riding of the season aboard his Suzuki RM-Z450. Teammate Brandon Hartranft had all of the speed to gain series points, but a track ruling didn't allow him to show what he and his Suzuki RM-Z450 were capable of despite strong riding throughout the event. 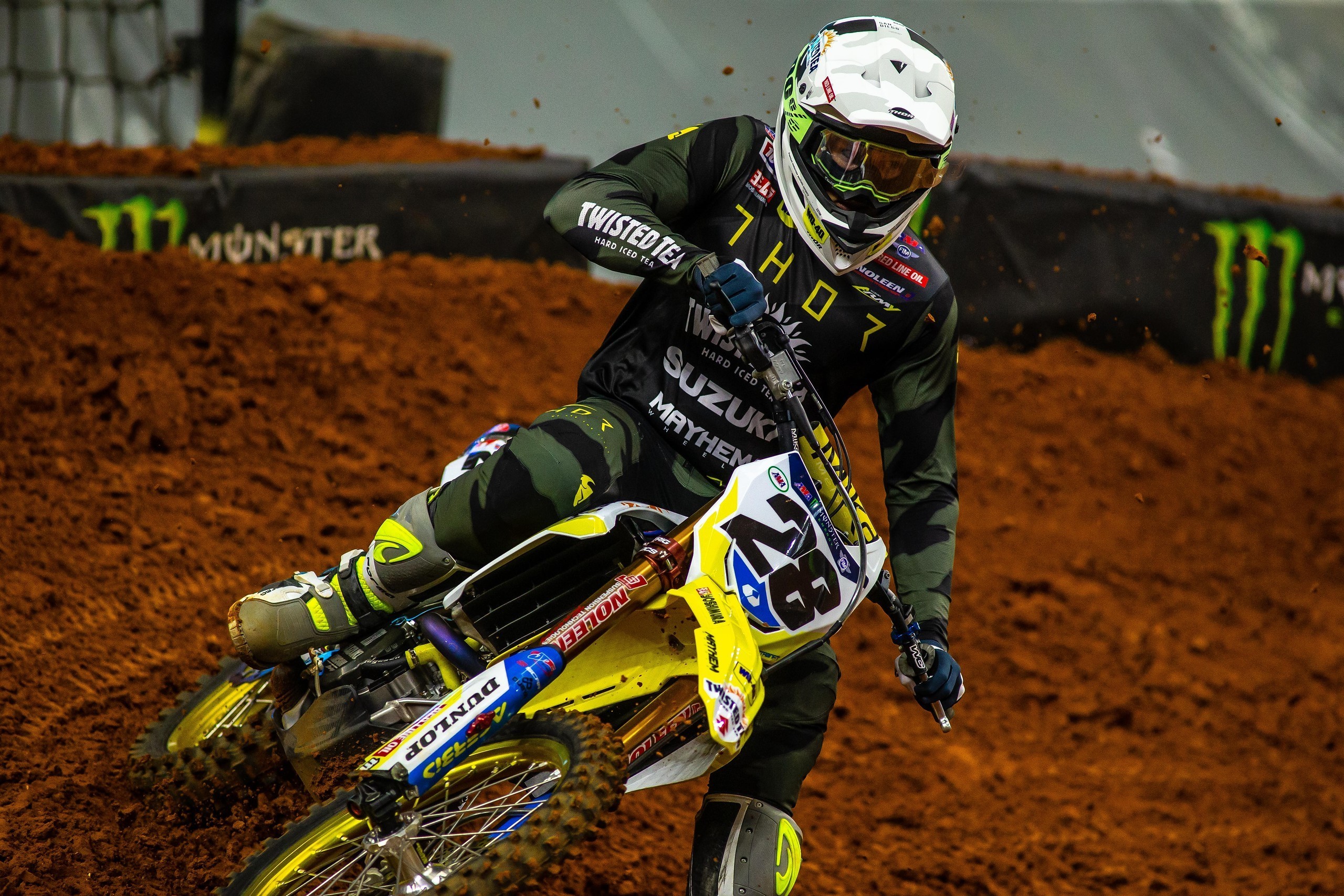 450 class rookie Max Anstie had a great night on the soft, but slippery Texas soil. After a mid-pack start in his heat race, he passed up into a direct transfer finish. In the main event he came out of the first corner buried in the pack, but made steady progress forward, including passing two riders in one corner, to match his best stadium 450 class supercross finish. The points on the night moved Anstie up one position in the points standings.

"I feel like we've definitely made progress," Anstie said shortly after the race. "I know on paper it looks like we've stayed the same, but honestly my crew chief Clark made some positive changes today, and I felt like I was riding better than the results showed. We had a lot of positives. I felt good in the whoops, I could jump the jumps, and I'm making progress at Supercross. It's only my fourth supercross event and I feel like there's a lot to learn, but I'm taking it all in my stride, I'm getting my laps in, and honestly, I couldn't be happier with my guys. I can now move on to next Saturday; we've got a few days' rest and we'll go again and I'm looking forward to it."

Big track changes from the Saturday round resulted in a long start straight and 450 class rookie Brandon Hartranft continued to impress with great starts. He rocked out of the gate in the LCQ, rounding the first corner in the top three. A late-race, aggressive pass attempt by another rider put him off the track; after the race, a ruling put Hartranft's official finish two spots shy of a transfer to the main. Unfortunately, Hartranft had to use the night as a chance to gain experience rather than rack up the points that his riding promised.

"The track was pretty good today. The whoops were pretty tricky, the jumps weren't too hard, but there were some decent sized rhythms." Hartranft explained after the racing, "I didn't ride as well as I did last Saturday. By the end of the heat race I was in tenth and got tightened up and just stayed there; I should've placed ninth and made it into the main event. I had second gate pick for the LCQ and got a good start, held third to fourth the whole time and then I got bumped off the track and then was ruled back to fifth, but we'll try again next Saturday."

"Both of the bikes worked great today, both riders rode really well," was Crew Chief Clark Jones' summation. "There was an unfortunate incident with Brandon in the last chance qualifier; he got knocked off the track. Max is improving. He was riding really well; he was one of the fastest guys in the whoops tonight. He's really learning supercross. I think this upcoming Saturday he's going to surprise a lot of competitors."

The team and riders remain in Arlington until Saturday when they'll attack a fresh track layout on the stadium floor of AT&T Stadium. After that round, there's a schedule break until the racing picks up again with a triple header at Atlanta Motor Speedway in Atlanta, Georgia on April 10th.