Brea, CA (April 15, 2021) – Suzuki riders competed under the lights on a hot night at Atlanta Motor Speedway for a groundbreaking Supercross during Round 14 of the 2021 season. Twisted Tea/H.E.P. Motorsports/Suzuki's Max Anstie rebounded from a Saturday crash to show great speed and composure aboard his Suzuki RM-Z450 on the rough track. Anstie's Twisted Tea/H.E.P. Motorsports/Suzuki teammate Adam Enticknap and his Suzuki RM-Z450 held their own throughout the night as Enticknap gained strength since returning to the series at the previous round. BarX/Chaparral/ECSTAR Suzuki racer Dilan Schwartz notched points on his Suzuki RM-Z250, also in his second race back from injury. Schwartz's BarX/Chaparral/ECSTAR Suzuki teammates Derek Drake and Sean Cantrell had brilliant moments aboard their Suzuki RM-Z250 race bikes on the red clay Georgia soil. 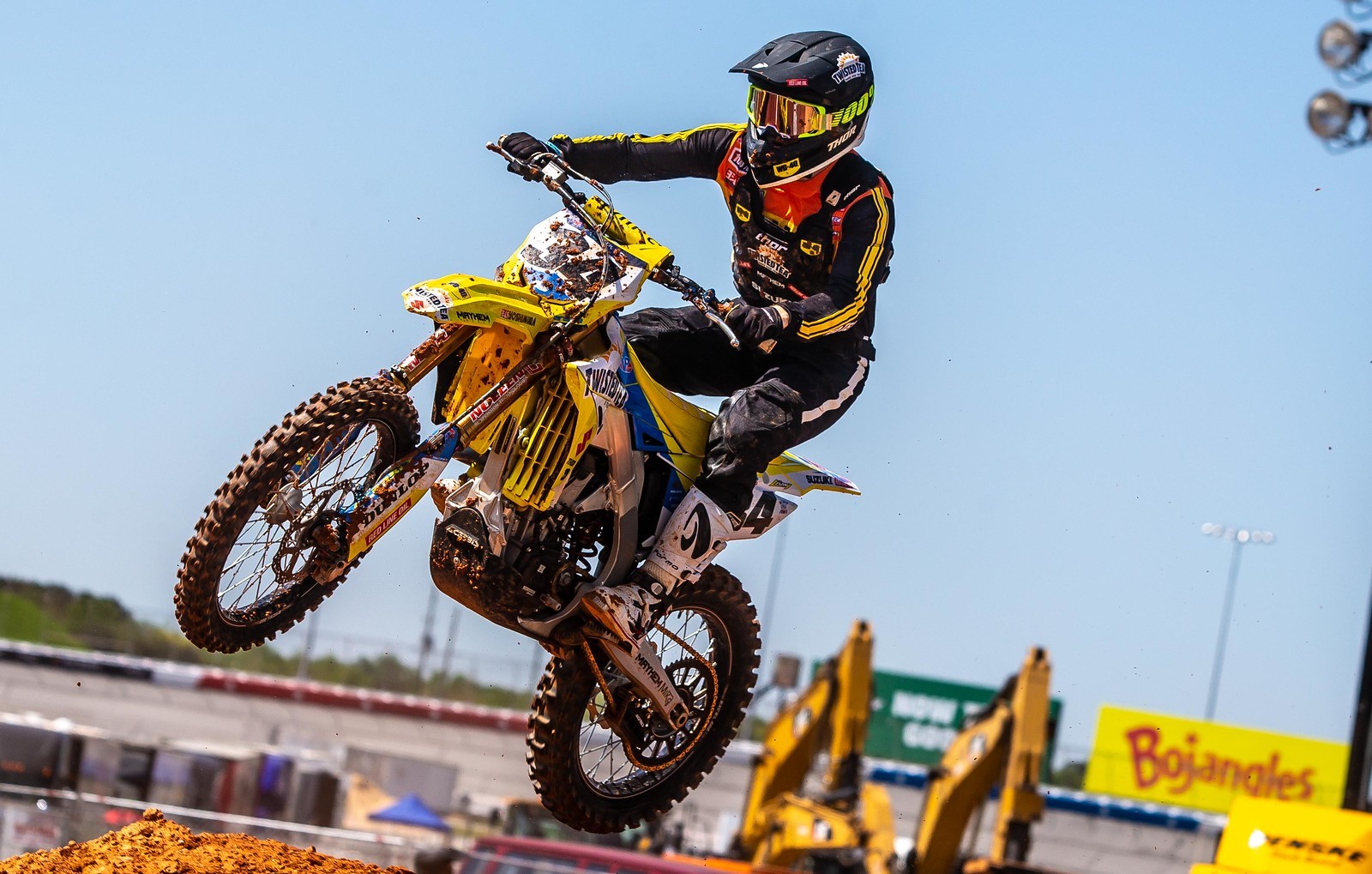 Max Anstie put in strong, consistent laps through daytime qualifying and into the night of racing, showing his quick adaptation to 450 supercross racing in his rookie year in the class. He put his Suzuki RM-Z450 directly into the main event from the first heat race, thanks partly to a blazing fast drive off the gate that saw him as the lead rider going into the first turn. When the gate dropped in the main, the Englishman sat just outside the top ten. The track suited his Outdoor and MXGP experience, but he was unable to gain positions. Still, Anstie brought home points and more experience on the unforgiving supercross tracks.

"We're back from Saturday. It's only been a couple of days," Anstie said, referring to his crash at the previous round while running in the lead group. "I did as much recovery as I could, but yet we did well today. It was okay, I'll take it and we'll move forward on to Saturday. The heat race went well. I got a really good start and was riding solid. In each session I went out there, I got better and better. I want to be further up there, but to come away with a fourteenth, it was okay. We'll take it. I've got some things that we can work on for this Saturday, so I'm looking forward to doing that." 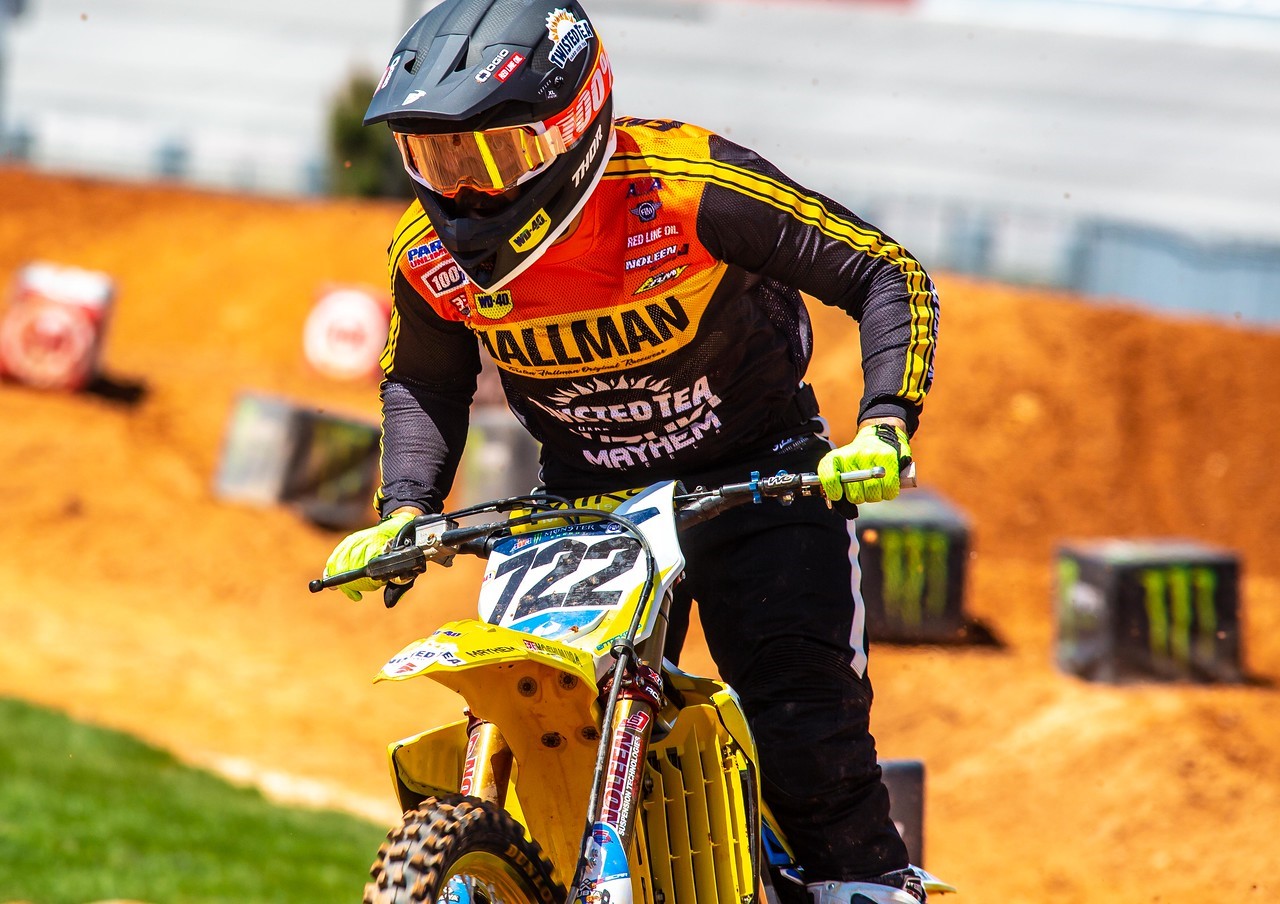 Adam Enticknap also put in a smart ride on the track that stretched across the raceway's infield between NASCAR turns four and one. Enticknap battled through the hot weather that stayed after the sun had set. He was unable to execute passes during his heat and the LCQ and unfortunately was unable to advance to a transfer position on the historic race night.

"I rode an okay heat race, not the best one I've ever had," Enticknap pointed out. "Then in the LCQ I made a mistake right off the start and caught the edge of the rut with my front wheel, which was a bummer because I'd gotten a really good jump out of the gate. The track was really good all night; My Suzuki was working great; I just need to fix a few tiny things like those starts and be more aggressive during the races. But with everything I've got going on: the collarbone, the scapula, and the broken ribs, I really feel like that's gotten a lot better and pretty much gone. I feel like every time I get on the bike I'm just getting better and better so I'm really excited for Saturday."

"Adam rode better, his shoulder's feeling a lot better,” observed Twisted Tea/H.E.P. Motorsports/Suzuki Crew Chief Clark Jones. “As far as Max goes, everything went really smooth today. He got a really good start and he ended up seventh in the heat race. We made little changes during the day like we normally do, and the bike was the best it was in the main event, and Max rode really well… We did take a few minutes after the main event; we went out and we checked out the track, considered different lines to see what the track looked like. He's getting better every event, I'm pretty excited for Max. This upcoming Saturday will be his best race ever." 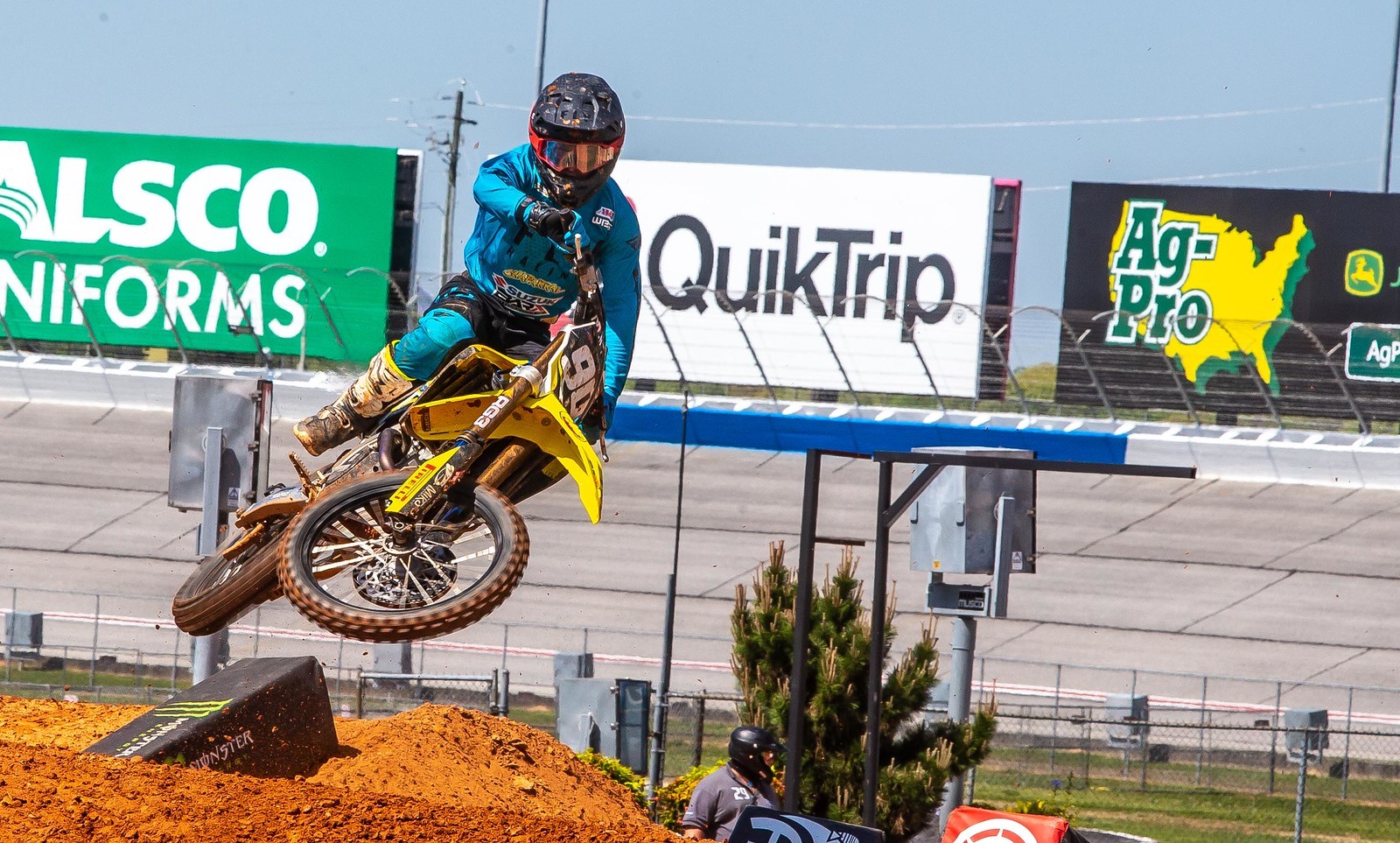 After missing all three Arlington rounds, rookie Dilan Schwartz's second race back gave him more track experience and one more professional supercross gate drop. Schwartz made things happen in the LCQ, with two consecutive laps of two positions gained to earn a trip to the main event. The rookie is looking ahead to turning his speed into stronger and stronger finishes.

"It was a big learning day today," Schwartz realized. "I'm feeling more comfortable on the bike. Being new at supercross I know I just have to put the pieces to the puzzle together and the results should come. I'm looking forward to next Saturday." 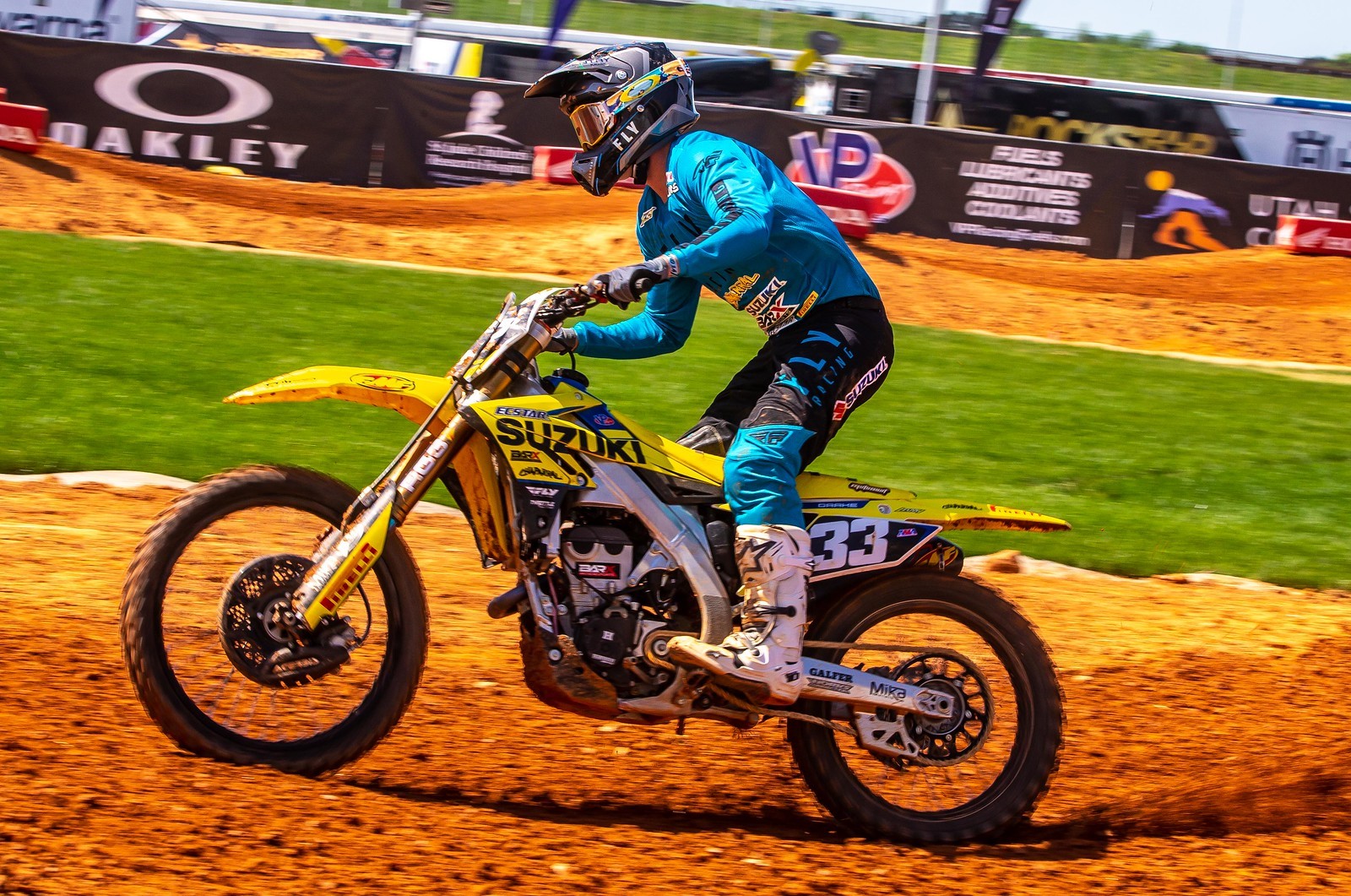 Derek Drake, Schwartz's BarX/Chaparral/ECSTAR Suzuki teammate, used a strong heat race finish for a direct transfer into the main. Unfortunately, a bad jump off the gate hampered his chances of a strong main event finish even with his strong supercross skills.

"It was a tough night, my second race back after a broken femur four months ago." Drake looked ahead, "I just need to race more and keep getting better each race." 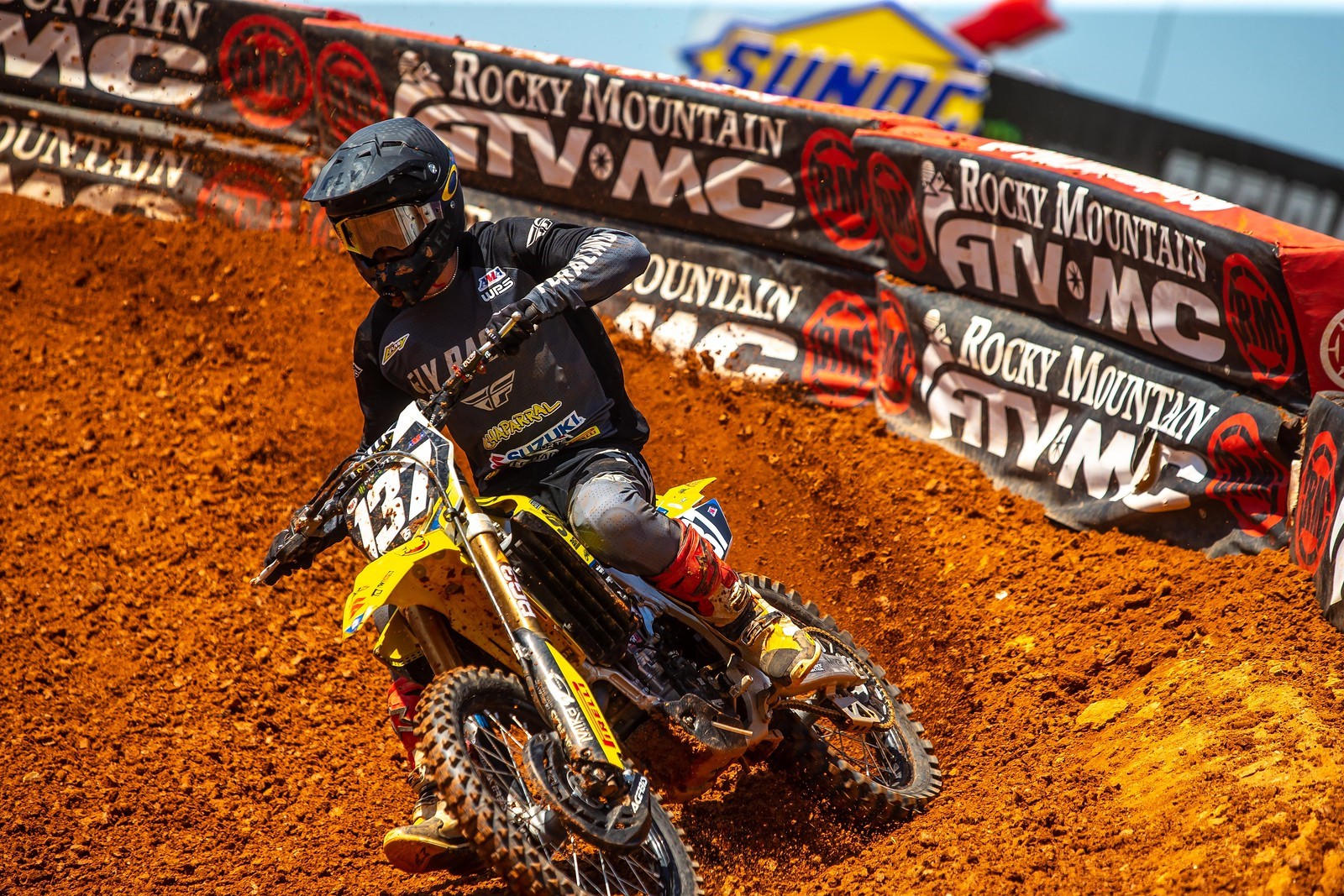 It was a bit of a heartbreaking night for racer Sean Cantrell who sat in a transfer position until a rider crashed directly in front of him on the track's high-speed rhythm section. Cantrell could not avoid getting caught up in the other rider's mistake and unfortunately ended his night with a crash rather than a spot on the main event starting gate.

"I had a hard time finding the flow of the track during the timed qualifying sessions," Cantrell noted after the racing. "I made a couple changes to the bike and did some soul searching before the night show. Unfortunately, had a little tip over in my heat race, but I was stoked on the changes we made and with my riding. I had to go to the LCQ and was battling for a transfer position until the rider in front of me came up short over the finish line and I had nowhere to go, but land on him. I don't have any injuries. I'm just a bit beat up. I’m really looking forward to Saturday. My starts have been great and I’m happy with my Suzuki and my riding; I just need to put it all together."

The Suzuki teams remain in Georgia for one more Atlanta race this Saturday, then head west to Salt Lake City for the final two rounds of the 2021 Supercross season. The racers are all healthy and fast and looking for more breakthrough rides to end the season with strong results to reward the impressive efforts of both teams.