Max Anstie made his much-anticipated 450 supercross debut and showed speed and track skills as if he'd grown up racing the discipline. Anstie hails from the World GP circuit and after GP victories as well as winning the 2017 individual overall at the Motocross of Nations is adapting to 450 supercross racing. After missing the first seven rounds with a pre-season injury, Anstie topped both of his qualifying sessions as the fastest rider on the track. During the night racing, Max battled up from outside the top ten to a qualifying position in his heat race. Though his main event finish didn't fulfill the promise displayed earlier in the night, Anstie showed incredible comfort and potential for a great season on his RM-Z450 race bike.

"It was nice to be under the lights racing my first ever 450SX event!" exclaimed Anstie. "It was a dream to ride into the stadium with the best supercross riders in the world. I came into this race without much preparation time so to leave with some points on the board and laps under my belt was all I could ask for. The team and I will get to work and make progress and I’m looking forward to Daytona in two weeks!"

Rookie Dilan Schwartz had an action-packed night from running inside the top three in his qualifying sessions, to an epic heat race battle where the young rider showed talent and heart, to maybe the greatest race-move of the night with a two-rider pass just before the checkers to secure a spot in his first main event. A main event re-start worked against the rookie's track position, then a crash on lap two dropped him out of the fight to regain a top five spot, but the Suzuki racer rode well and improved his position throughout the race.

"Orlando definitely was a tough day," was Schwartz's take. "It didn’t really go the way we planned. I was making rookie mistakes all day, which cost me to miss out on qualifying straight from the heat so I had to go to the LCQ; that race was pretty hectic. In the main I was running in fifth place and unfortunately the race got red flagged. On the re-start, I didn’t get the greatest start and then ended up tangling with another rider and going down. I'm happy to come away healthy and I am looking forward to improving at the upcoming rounds." 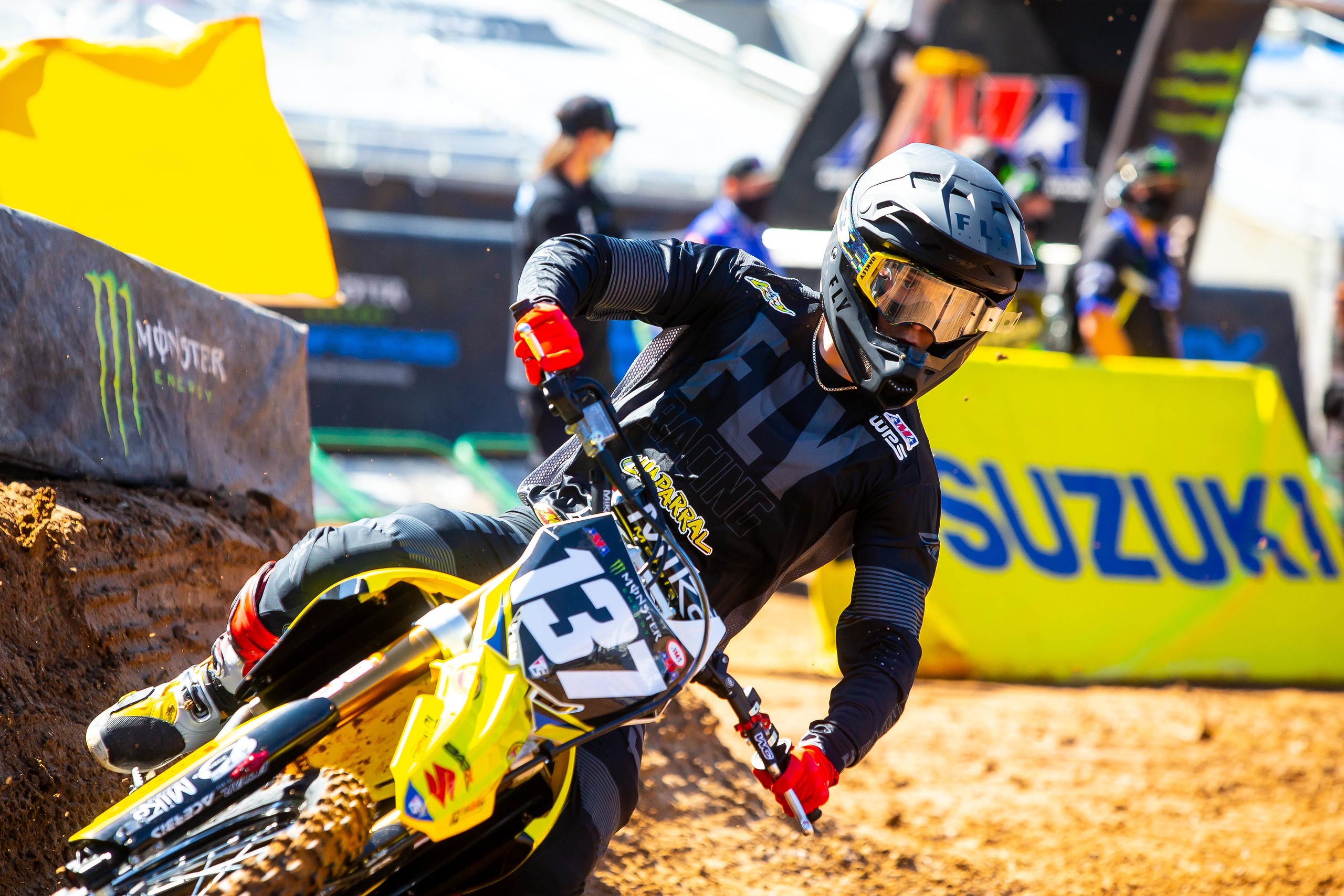 Marking a return to racing, BarX/Chaparral/ECSTAR rider Sean Cantrell proved he still has blistering track speed. Running as high as second in his qualifiers showed he had the raw speed, and he put it to good use in his heat race. After a challenging start, Cantrell sliced his way forward to reach a transfer spot. Unfortunately on the final lap, the whoops section, especially notorious for the past two rounds, grabbed Cantrell and ended his night early.

"I went into round one not really knowing what to expect, but I just knew I was comfortable on the bike, which is the biggest thing," Cantrell said. "In the two qualifying sessions I felt good on the bike, I felt that the speed was there, I just had trouble putting together a whole lap. I was actually shaking the cobwebs off after not being in the stadium for about two years. Once I got behind the gate I knew I was back at home. I knew that I was meant to be there and all the work I put in was about to pay off. In the first corner of my heat I got pushed wide by another rider and a lot of guys snuck around the inside. After that I made some pretty good passes and got into qualifying position. The white flag came out and then I made just the slightest mistake in the whoops and it bit me. I left Orlando with a broken collarbone, hopefully we will get it plated and make it to one of the Arlington rounds." 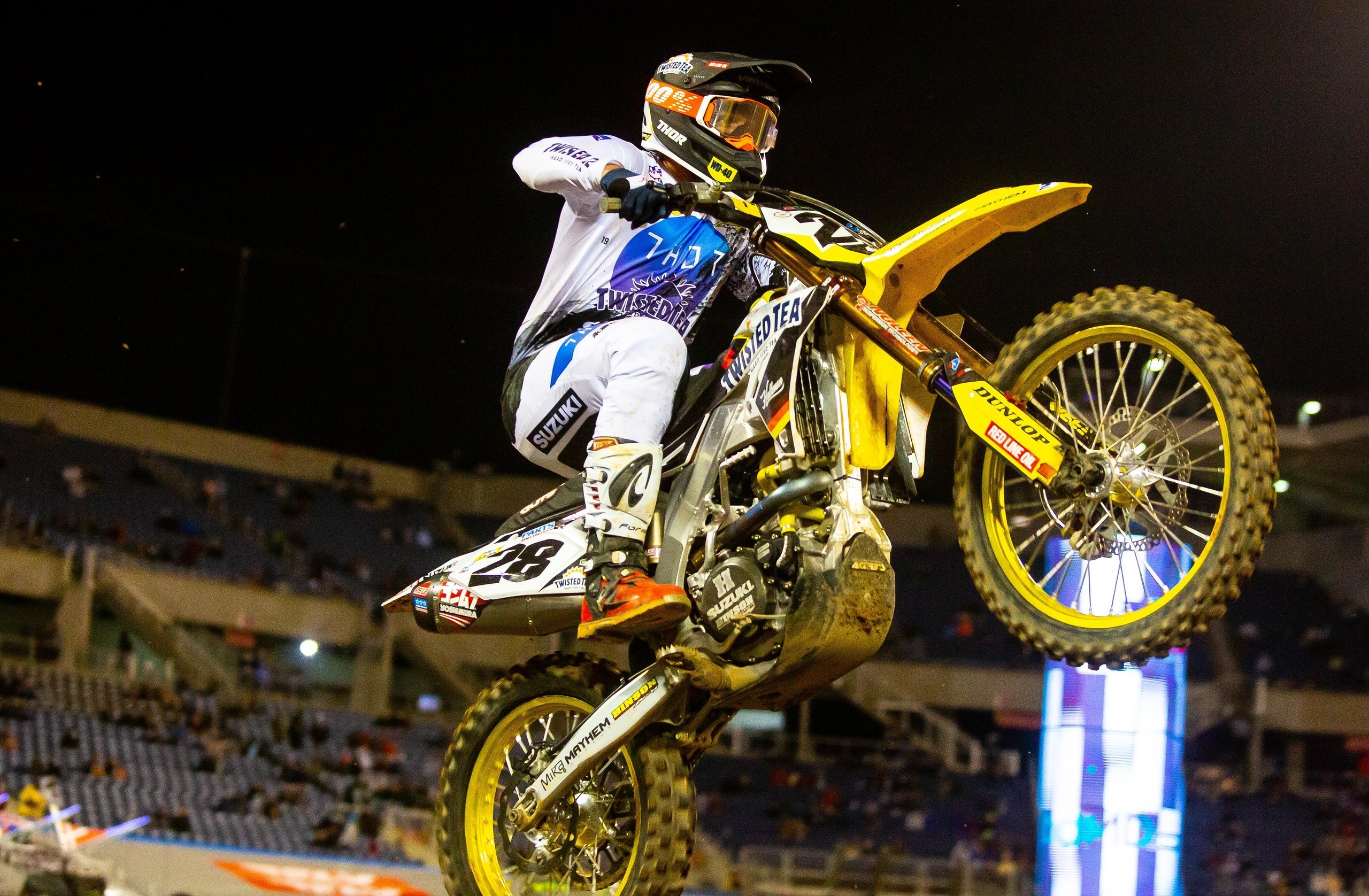 Brandon Hartranft's day started with him running as high as fourth in his qualifying session. He took his great starts to the next level and pulled the holeshot in the LCQ. He ran up front for most of the first lap. A slightly mistimed counterattack on the final lap kept him just out of striking distance for a final transfer to the main event, even on a night with strong progress from the 450 class rookie.

"Orlando 2 was okay." Hartranft took a big-picture view, "The track was tough all day. I’m slowly getting back to where I was. In my heat race I didn’t ride well until halfway. In the LCQ I got the holeshot, which was great, but made a few mistakes on the first lap. I got right behind Wilson and tried to follow him, but made a mistake in the whoops and got passed out of the transfer spot. I'm going to take the positives from this weekend and go back to work for these next two weeks before Daytona." 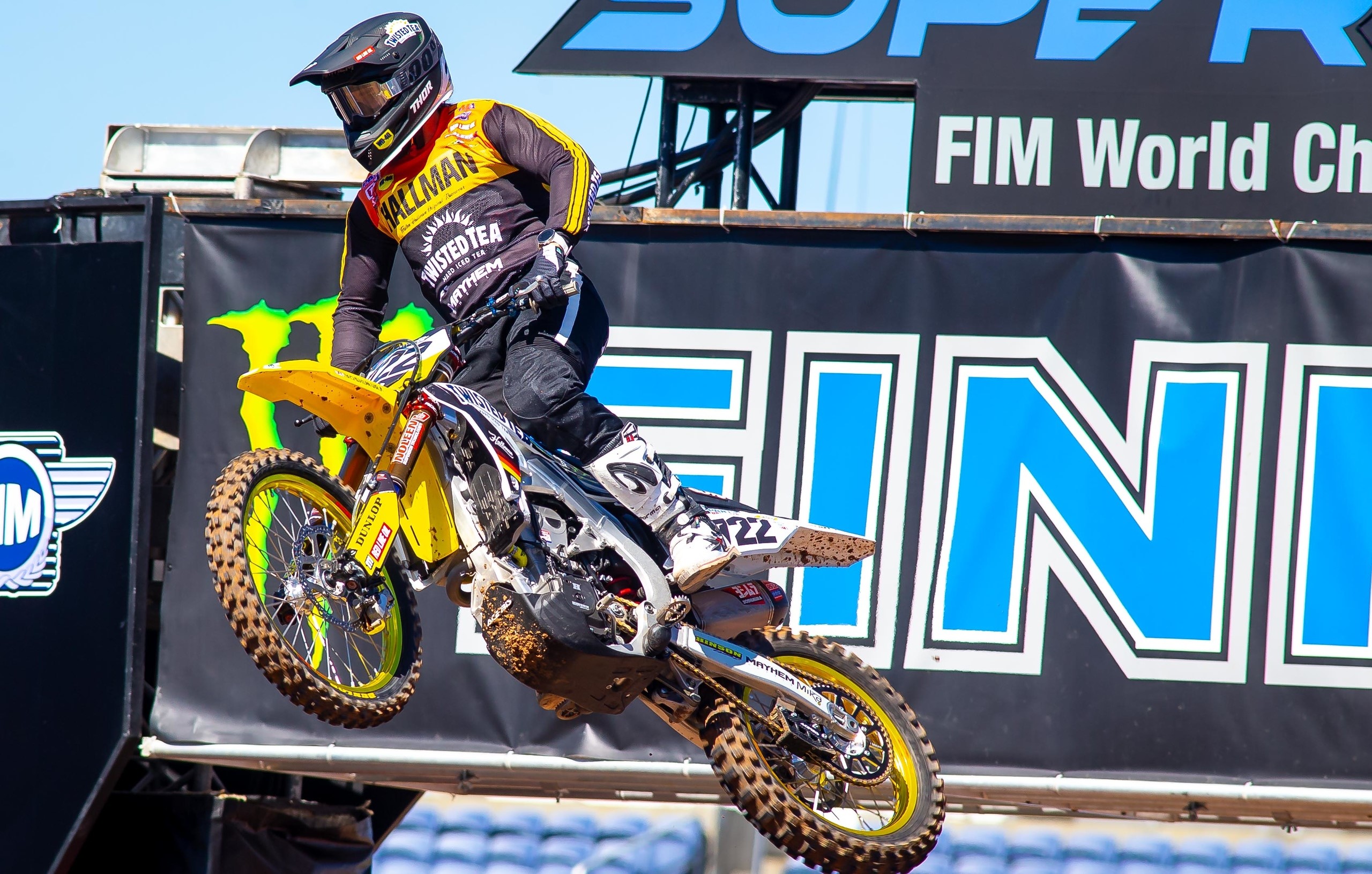 The toughest news of the night was Adam Enticknap's crash in his second qualifying session while putting in blazing fast lap times. The popular rider was out for the event, off to get a full injury evaluation.

"It was a bittersweet race for the team at Round 8 in Orlando," said Twisted Tea/H.E.P. Motorsports/Suzuki Team Manager Dustin Pipes, "There were a lot of positives, but the injury to team athlete Adam Enticknap was in the back of everyone’s mind. Fortunately Adam walked away from a nasty fall with only a broken right clavicle. Brandon continues to improve, but the class is very tough right now. I expect him to bounce back in Daytona. I am very proud of Max; he hit marks throughout the day and there is a lot to build on after his first-ever 450 Supercross. With this only being his fourth time on the bike after injury, we treated this race as a warm-up to Daytona – only taking the positives. He rode a complete race and mixed it up with many of the established racers. I look for Max to continue to grow throughout the remaining rounds."

The racers have two weeks until round nine at the storied Daytona International Speedway infield. With the exciting returns of Max Anstie, a sand specialist who should excel at Daytona, and Sean Cantrell, the rookie season start of Dilan Schwartz, and the steady improvements of 450 class rookie Brandon Hartranft, the beginning of the second half of the 2021 supercross racing season is looking to deliver more great racing.