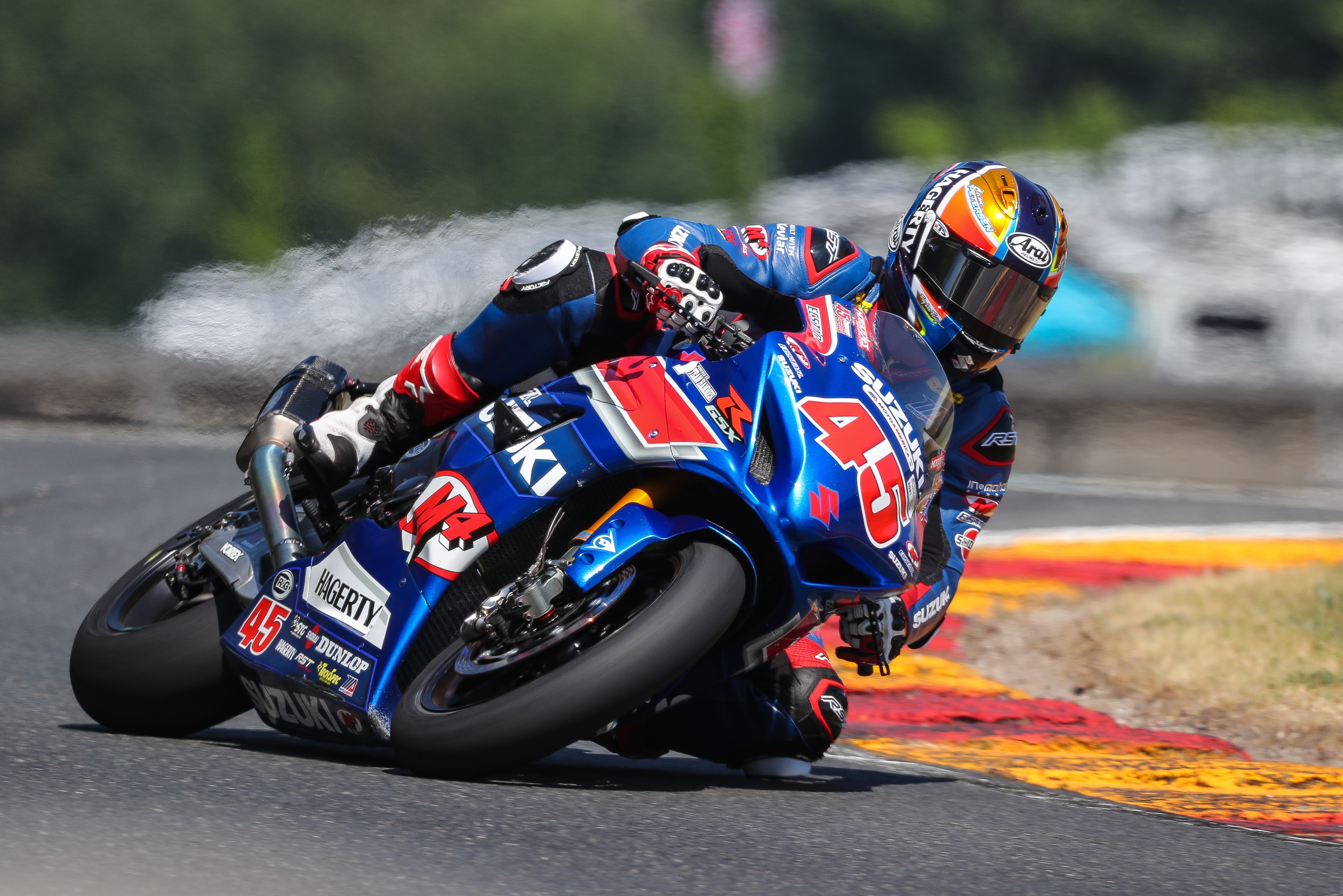 Petersen enjoyed a milestone ride on Saturday, soaring to his first career MotoAmerica Superbike podium with a hard-fought third, in his first season in the Superbike class. Despite the achievement, the likable South African came away from that battle less than completely satisfied after missing out on second place by a scant 0.04 seconds. He promptly erased any regrets with an even better showing on Sunday, briefly leading the race before locking down a clear runner-up result.

“That was the plan executed,” Petersen said. “We spoke before the race about what I needed to do and luckily I got off to a really good start. My goal was just to keep the win in sight and have a carrot to chase, and I did that for the most part.”

“Honestly, I can’t thank my team enough. They’ve worked very hard to get me to this point, they gave me the opportunity, they believed in me, and now, we’re finally starting to do it. Hats off to my whole crew.” 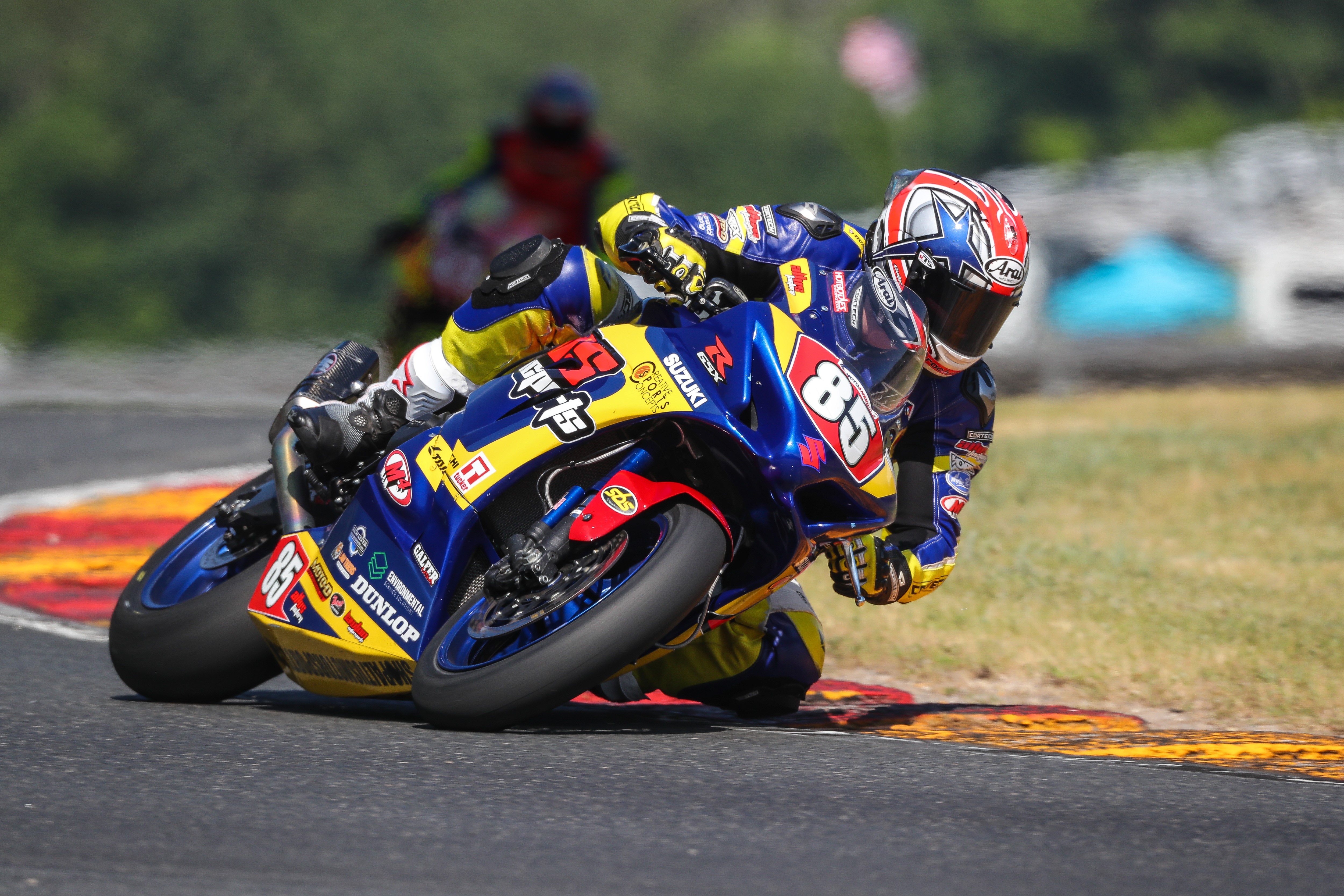 In the Stock 1000 class, Jake Lewis proved once again his strength as a racer with his second win of the season and he maintains control as the overall leader in the ultra competitive series.

Race-winner Lewis said, “I honestly didn’t think I was going to be able to fight for the win. I was struggling to keep pace yesterday, but once it’s race time and the show goes down, you definitely push a lot harder. I was on the edge. I was looking at my lap timer and I was doing low 2:14s and I haven’t even been in the ‘15s all weekend long.” 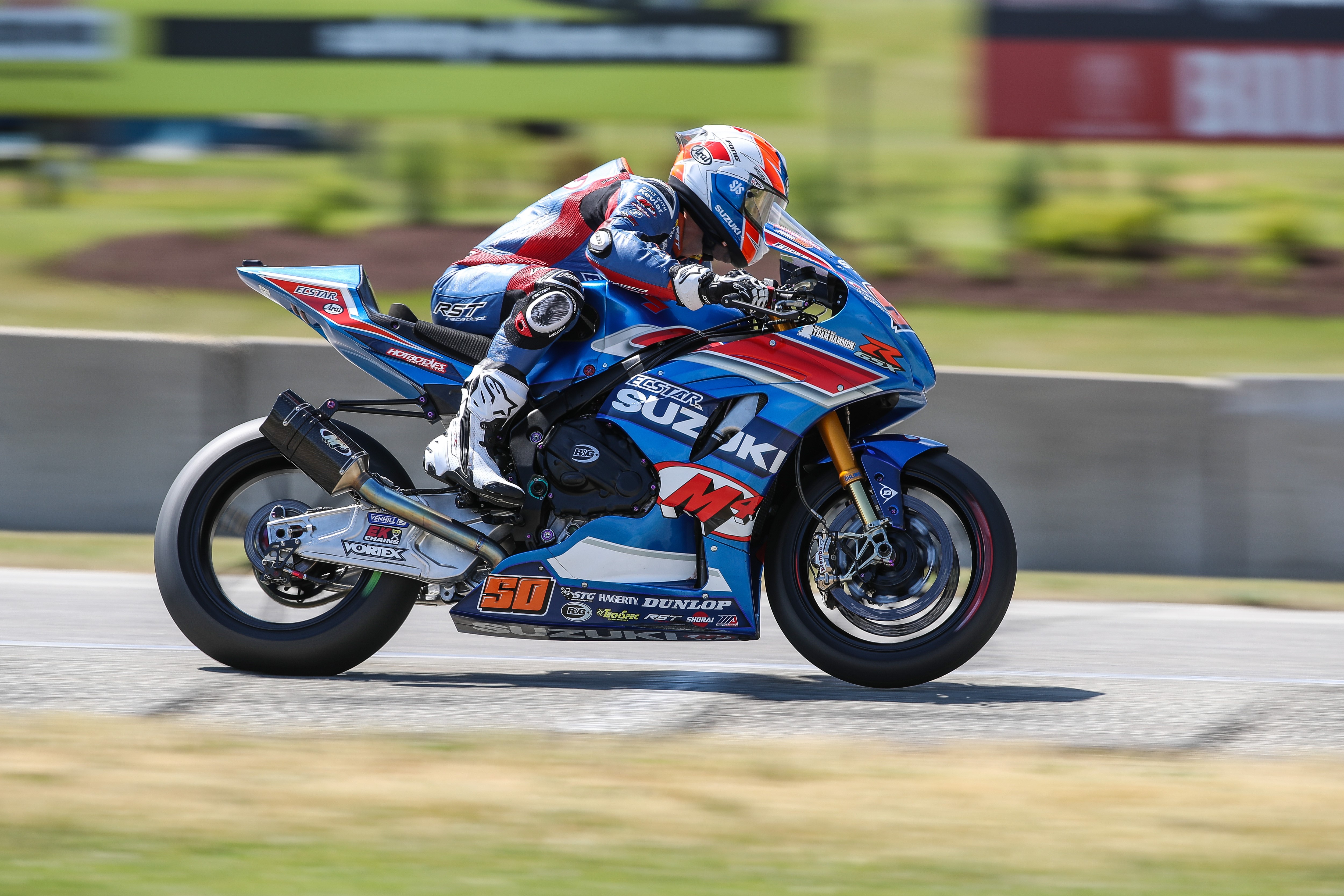 M4 ECSTAR Superbike rider Bobby Fong, came away with a pair of fourths, but demonstrated the speed necessary for a sure-fire double podium weekend. After finishing 0.03 seconds off the box on Saturday following a near race-long ride in second position, Fong’s Sunday race took an entirely different shape, albeit with the identical result in the end.

The Californian was pushed wide in Turn One at the start and shuffled back several positions. He was then caught up in numerous scraps, which severely hampered his pace before finally breaking free in fourth late in the 12-lap race. Once in the clear, Fong dramatically closed down on third position. He simply ran out of time, crossing the stripe an even narrower 0.004 seconds removed from the podium the second time around.

“It was a crazy race,” Fong said after Sunday’s contest. “Today didn’t tell the story of what place we had in us. We gambled and put a setting in that I believe could have definitely got us in the top three.”

“I’m happy to finish fourth, but the good thing about racing is we have another weekend coming to redeem ourselves. Everybody knows we don’t like losing. I’m staying positive and looking forward to the next one,” added Fong. 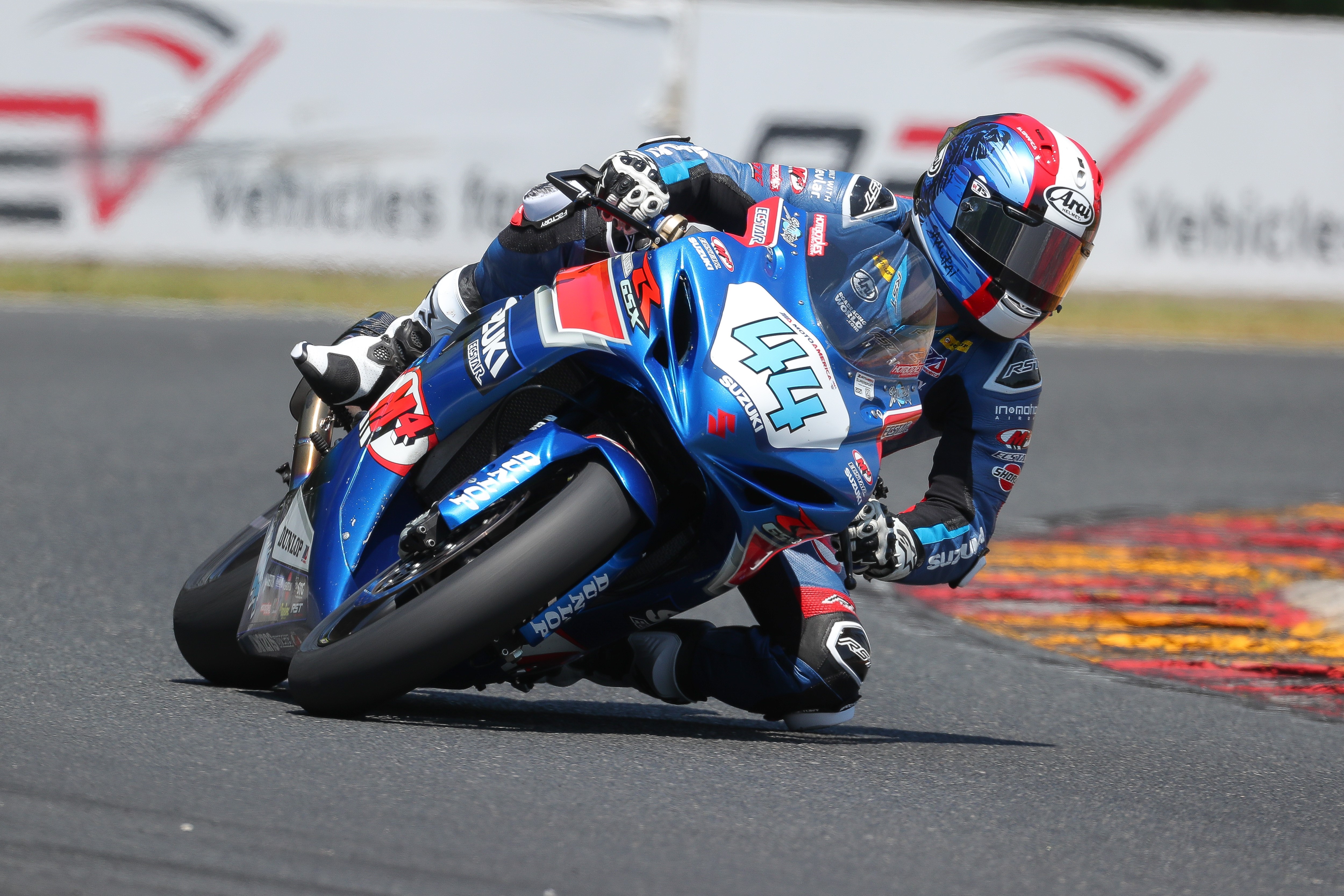 Sam Lochoff (44) took his first podium finish in the Supersport class on his Suzuki GSX-R600.

The weekend marked a new career best for Lochoff, who earned his first-ever podium in the middleweight class with a runner-up performance on Saturday. He nearly backed it up with a second podium a day later, but came home fourth at the flag, just 0.088 seconds short at the flag. 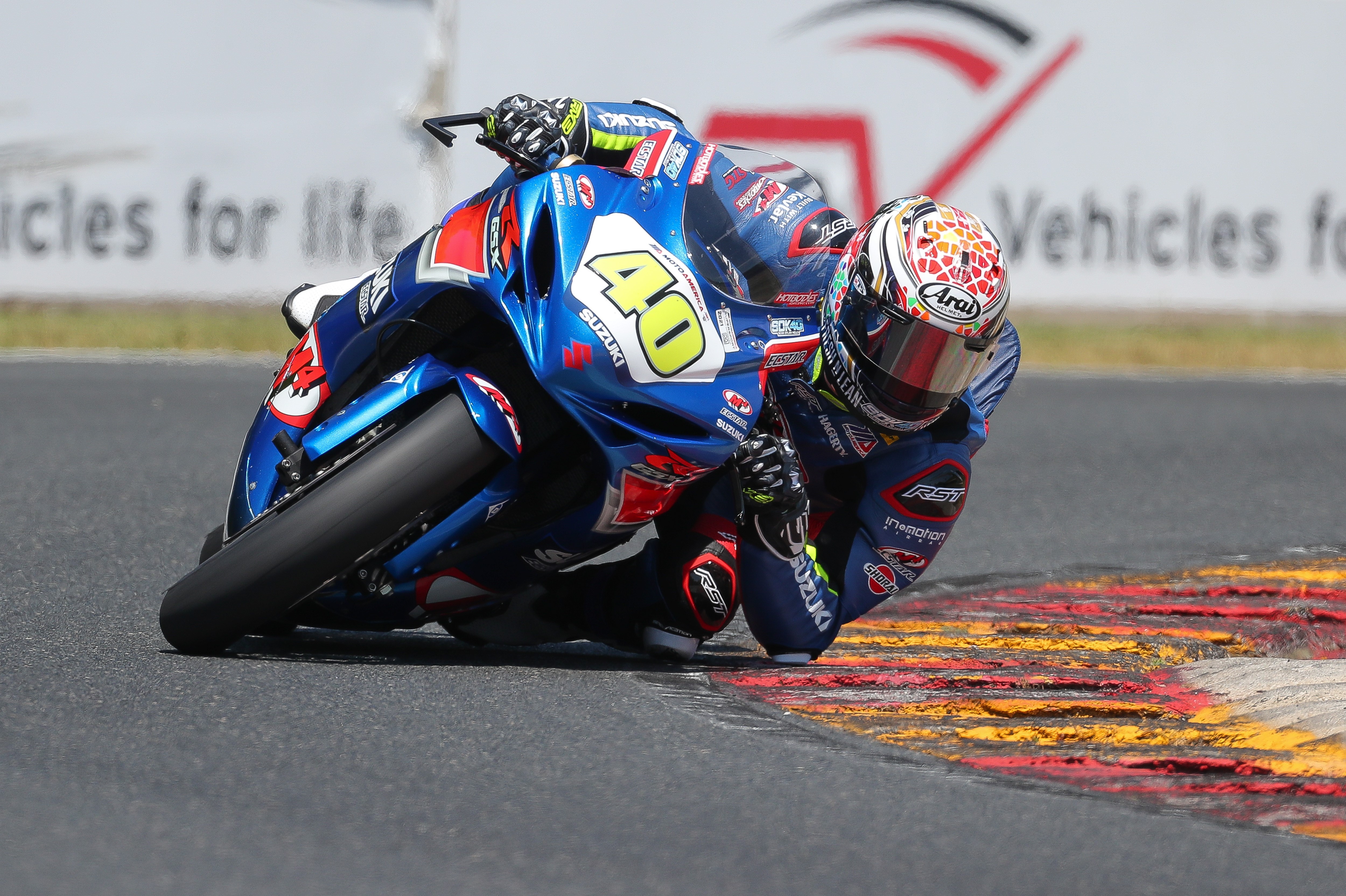 Sean Dylan Kelly (40) left it all out on the track and maintained his points lead in the Supersport class.

Kelly went back and forth for Saturday’s thrilling race -- engaging in a shootout that saw more than thirty lead changes -- before crashing on the final lap with his rival. Critically for his championship hopes, ‘SDK’ remounted and still finished in sixth.

On Sunday, Kelly lost his chance at another scrap for first after getting off to a tough start, but still managed to escape to a well-earned second. As a result, the Floridian continues to lead the early-season title fight.

“Today was much different than yesterday,” Kelly said. “Yesterday was a great race -- a hard fight -- but we made a mistake in the end. We wanted to build off that, but the start was not good today. I made a mistake in Turn One and a few guys got past me. After that, there was a gap to the lead that I couldn’t make back up. I wasn’t able to do what I wanted, but I know we’re going to build from here. We’ve got another shot at the next round, and we’re going to go in hard and keep on working.” 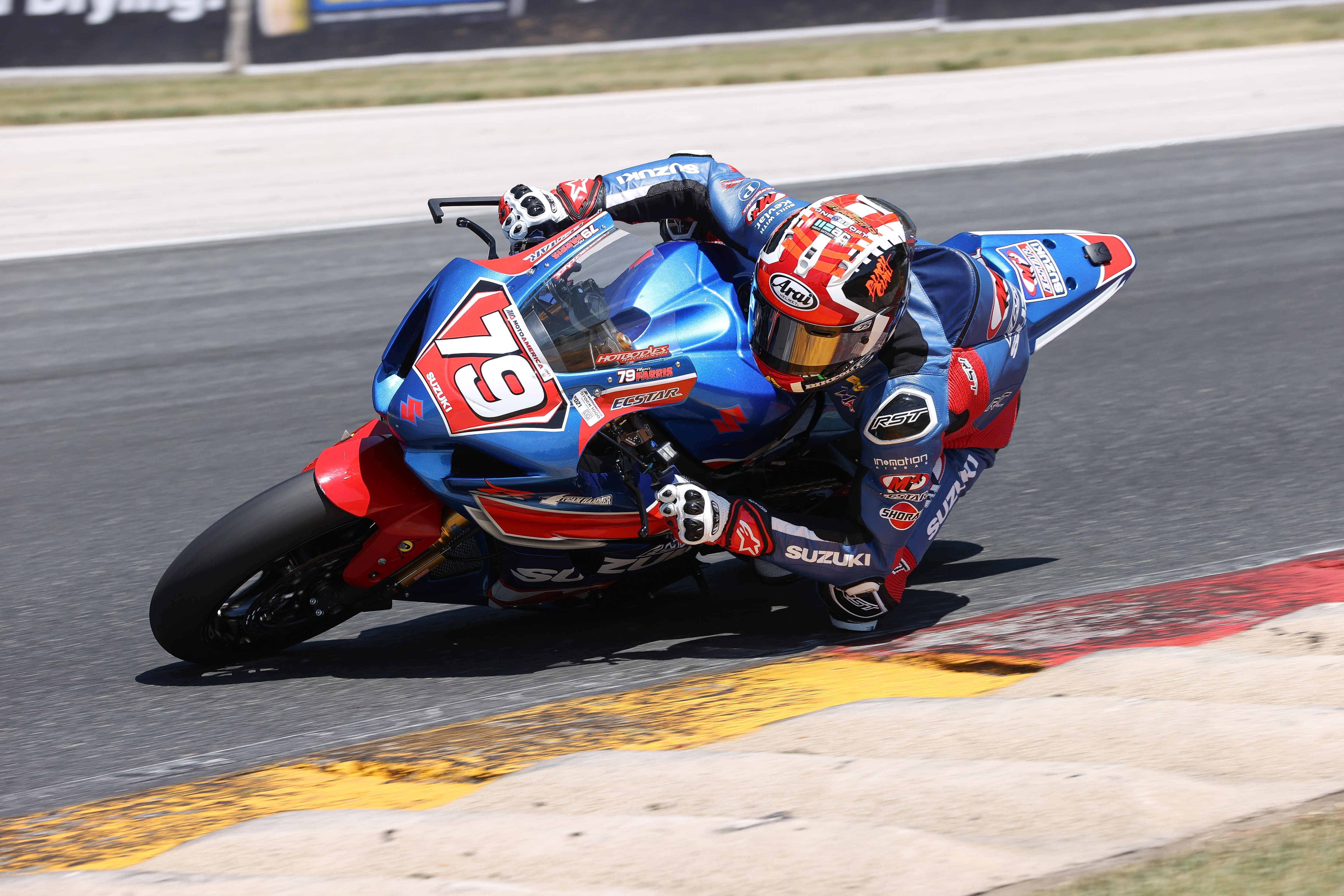 Wyatt Farris (79) had a solid weekend and continued to earn points for the Stock 1000 Championship.

In Stock 1000, M4 ECSTAR Suzuki’s Wyatt Farris raced his way forward to finish tenth in the race, adding more points to his season total and earning a top-ten position in the overall championship standings.

Team M4 ECSTAR Suzuki will be back in action in two weeks’ time at the Ridge Motorsports Park in Shelton, Washington, on June 25-27.