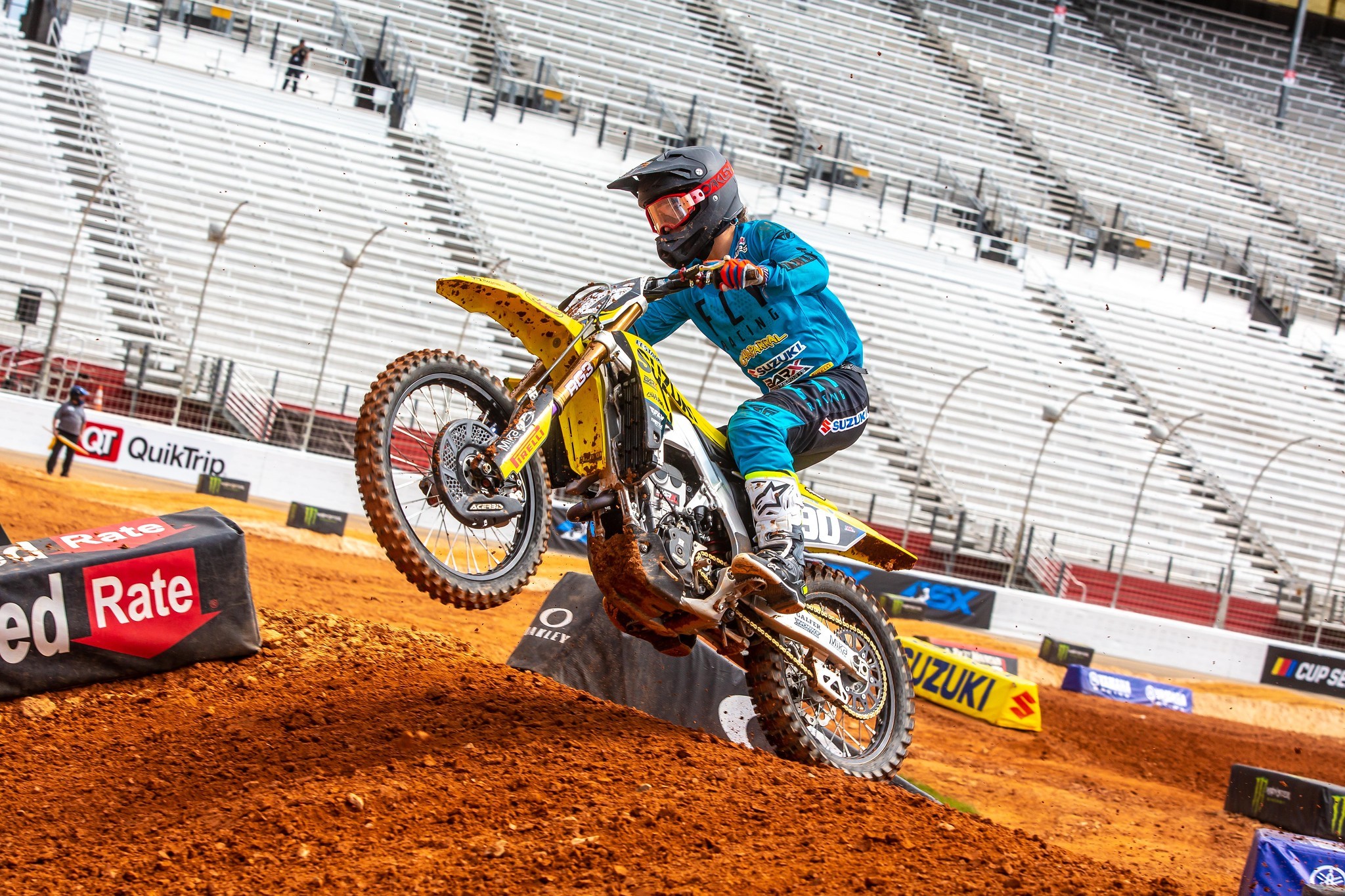 Dilan Schwartz fought back from a mid-pack start in his heat race at the final of three races at Atlanta Motor Speedway. Though Schwartz missed a direct transfer position, the rookie showed great form in the LCQ where he finished on the podium. In the main event, Schwartz had the strongest supercross performance of his young career. On the re-start, due to a red flag delay, Schwartz emerged in seventh position at the holeshot stripe. He advanced to sixth place within the first three minutes of racing until an incident dropped him back. Schwartz charged forward and made passes late into the race to earn his career-first top ten finish in his rookie year of professional supercross. The finish bumped him up six spots in the championship points standings.

"Yesterday was a step in the right direction," Schwartz said after the finish. "I struggled all day with the track but got a good start in the main. I was able to run up front in the main and I ended up with a top ten finish. I'm looking forward to Salt Lake!" 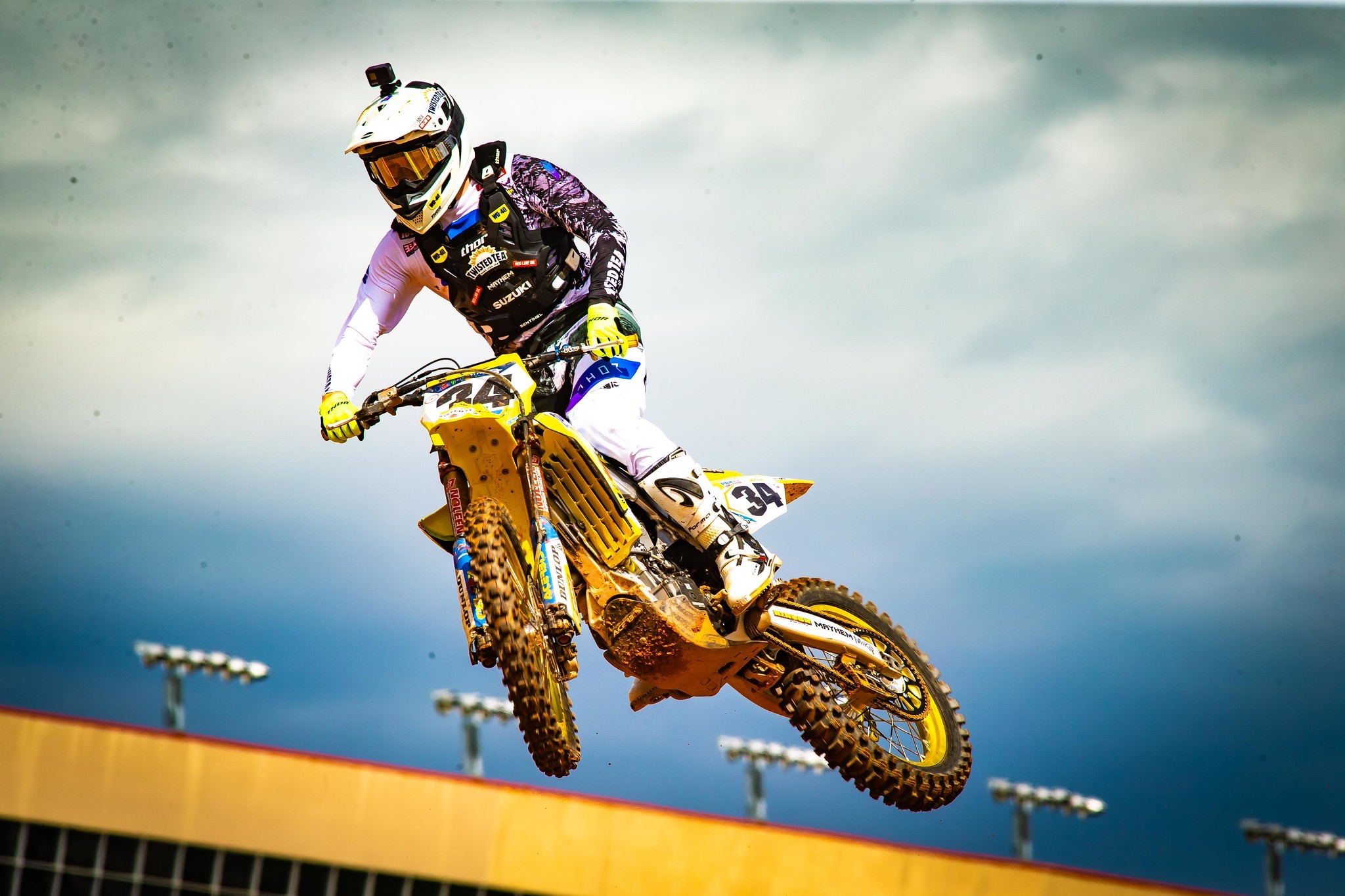 Max Anstie again impressed with his quick adaptation to the 450 supercross class. After a 15th place start in heat two, Anstie put on a charge to pass seven riders and earn a direct transfer to the main event. A mid-pack start in the main hampered the fast racer's progression up the results board, but a strong ride gave Anstie better footing in the premier supercross class with two more rounds remaining on the season.

"The track was definitely tough, but we're learning," philosophized Anstie, "We're learning each time we're out there. The team and I are definitely making steps forward. I would have liked to have been further up, obviously, but we pushed as hard as we could. We've just got to go back to the drawing board and get ready go again for the Salt Lake races." 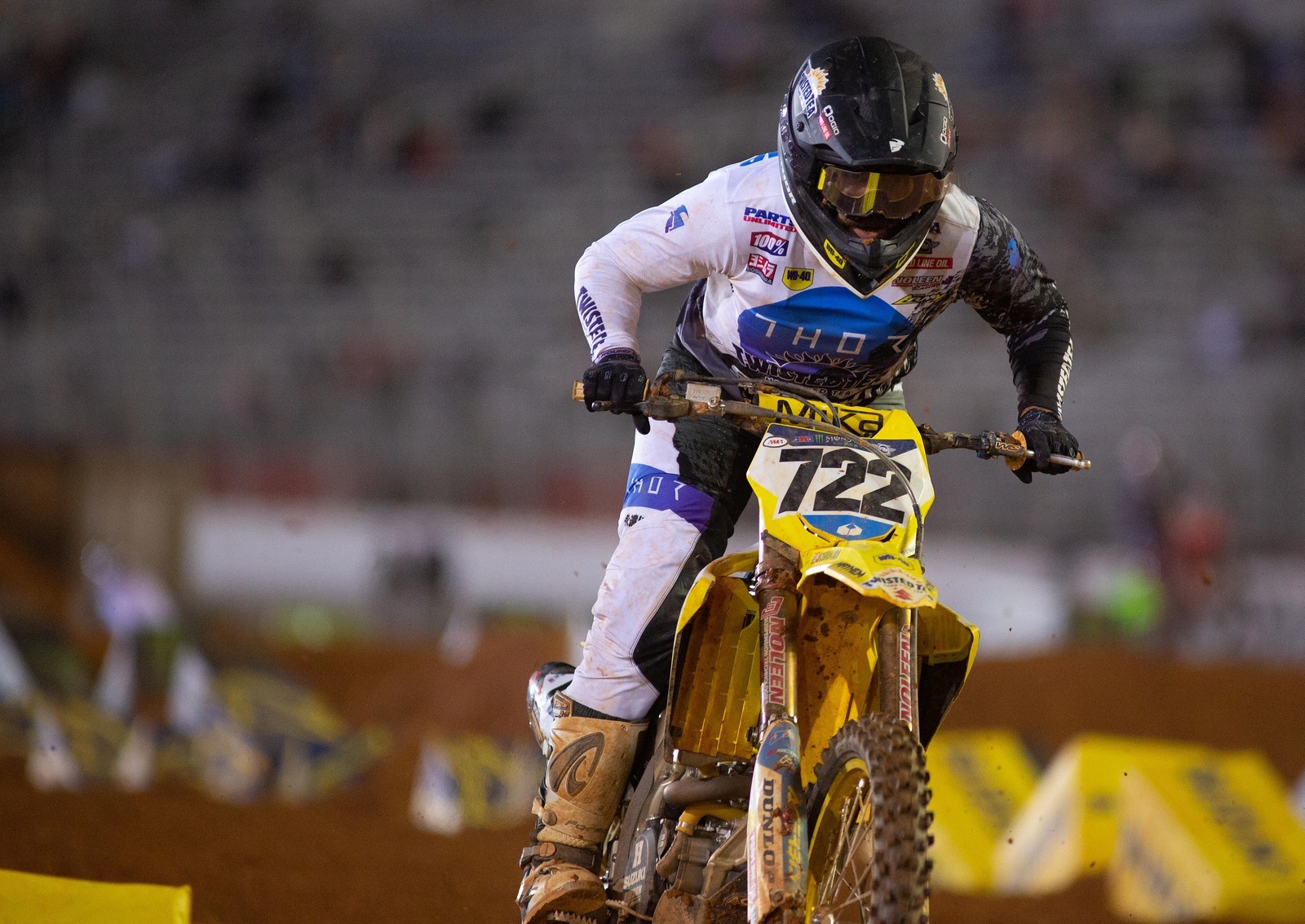 Adam Enticknap was inside the top five at the start of the LCQ and was the rider on the move, quickly slicing through the pack to earn a second-place finish. A mistake off the starting gate in the main event ended Enticknap's hopes of a top finish, but the rider stayed strong in the third race in eight days since his return from an injury, showing that he's gaining strength as well as track speed and ready for the final two rounds of 2021.

"I felt better even though I had that little crash [in qualifying]." Adam Enticknap understated, referring to his encounter with a spinning rear wheel after a crash in the whoops. "In heat one I had a great start; my H.E.P. Twisted Tea Suzuki got out of the hole really well. I ended up finishing tenth, one spot out of the main, so I had first gate pick in the LCQ. I got a good start in the LCQ and made some good passes and finished in second place. In the main, the track became really rough and really rutted. By the end, the whoops were just unbelievable; I haven't seen anything like that. Overall, it was a building night toward the last two rounds in Salt Lake City and it's definitely good to feel better and better the more I race." 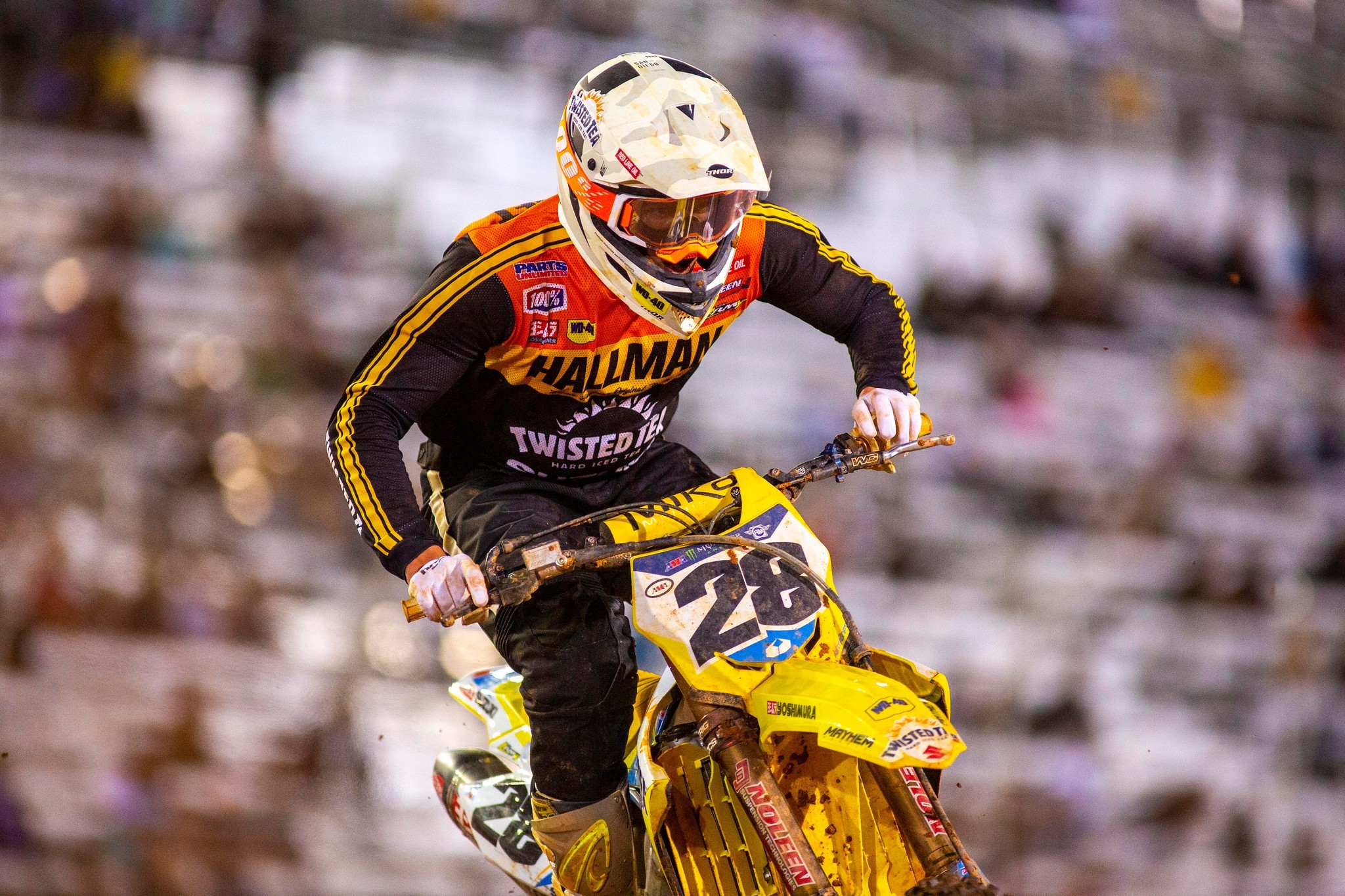 After missing the first two Atlanta races, Brandon Hartranft put his speed to good use at the third visit to the high-speed track. In the LCQ, Hartranft put his RM-Z450 into the top three at the holeshot line and battled with several riders at the front including with his Suzuki teammate Adam Enticknap. After running in second place for most of the race, Hartranft earned a direct transfer to the main with a third-place finish. In the main event Hartranft charged hard, advancing through the pack until trouble on lap six thwarted his progress. The 450 class rookie ended the night having shown impressive speed and the ability to pass. Hartranft is poised for his strongest finishes in the remaining two rounds.

"I executed well in the beginning of the LCQ. I was in second and was going to make the pass for first when the leader went down in the whoops right in front of me. I actually had to jump over his bike, but I clipped his wheel and almost went down. Because of that, I dropped back to third. In the main event I had an okay start. When I tried quadding out of the whoops I caught an edge and went off the side of the track right before the tunnel jump. I had to go around the starting line in the infield and then shoot back onto the start stretch. My goal was to pass the guys that had just passed me. I got around one rider but didn't get the other one. All in all, it was a good day for a return ride and I'm looking forward to next weekend."

"Atlanta Three went well." Twisted Tea/H.E.P. Motorsports/Suzuki Crew Chief Clark Jones elaborated, "It was good to have Brandon back. All three of our riders rode well today. They're all safe, and we're all ready to go to Salt Lake City. I would've liked to have seen all three of them do better in the main event, they're totally capable, but it was just one of those nights." 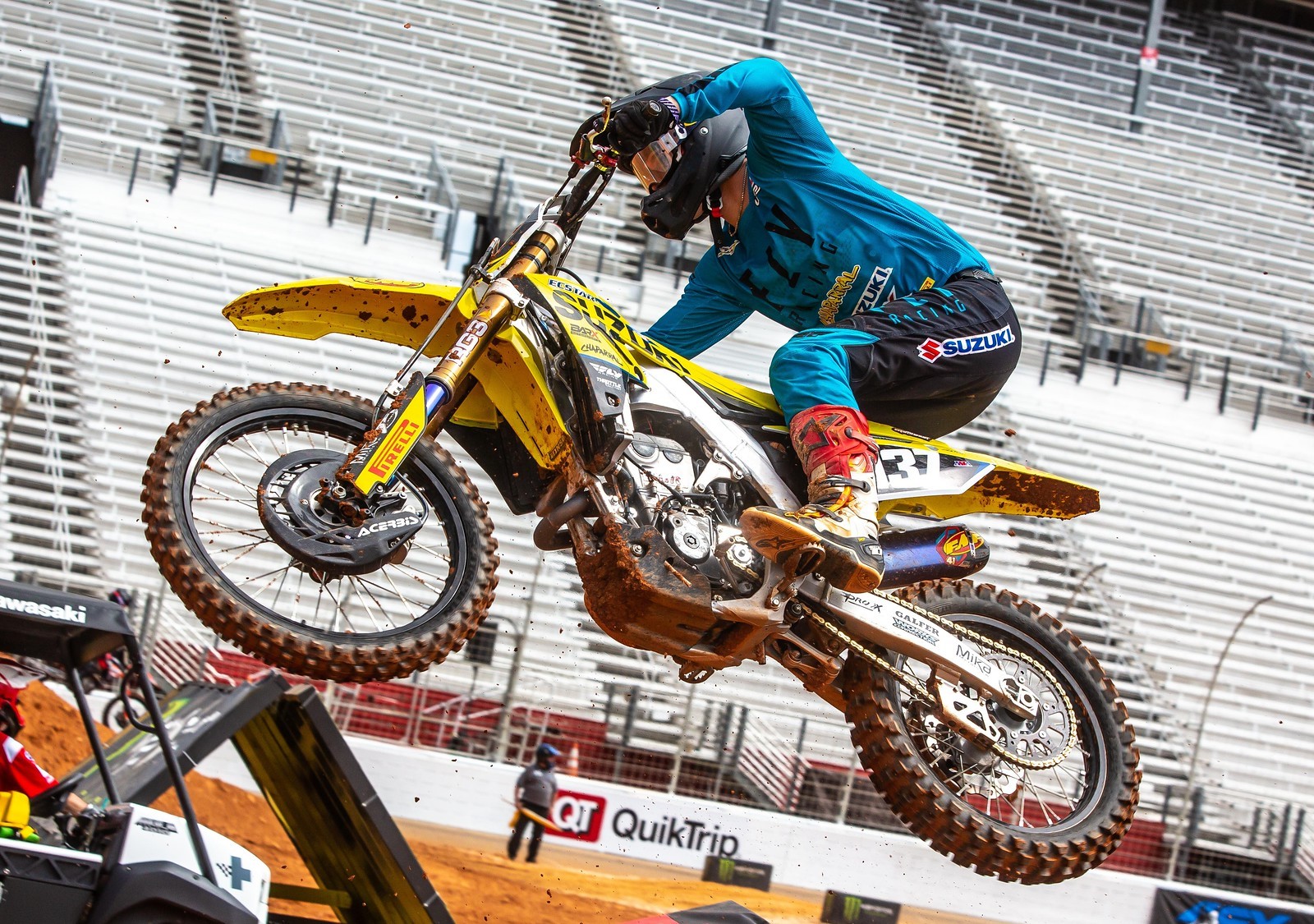 In his heat race Sean Cantrell got a good jump off the gate and put in an aggressive charge down the start straight. Cantrell was into second at the first corner, but officially third at the holeshot stripe. From there the young racer impressed in his return to the sport after stepping away from racing in 2020. Cantrell kept his BarX/Chaparral/ECSTAR Suzuki RM-Z250 in a podium spot until mid-race when he lost a single position. Cantrell used a fourth-place finish for a direct transfer to the main event with a good gate pick. Unfortunately, Cantrell wasn't able to duplicate his ability to put his Suzuki RM-Z250's power to the ground on the start straight and a poor starting position relegated Cantrell to a finish outside the top ten despite showing that his speed is returning after his time off.

"What a day!" Cantrell exclaimed at the end of the night's racing. "We went stiffer on the rear shock for the night show and it definitely was the right decision. I got fourth place out of my heat race and I was very happy with my riding. It was my first main even in two years, so it was a little strange being back out there. Riders were going down left and right. There were riders and bikes laying in the middle of the track; I've never seen anything like it! I had my own little mishap in the whoops, but I'm taking a lot of positives from the day." 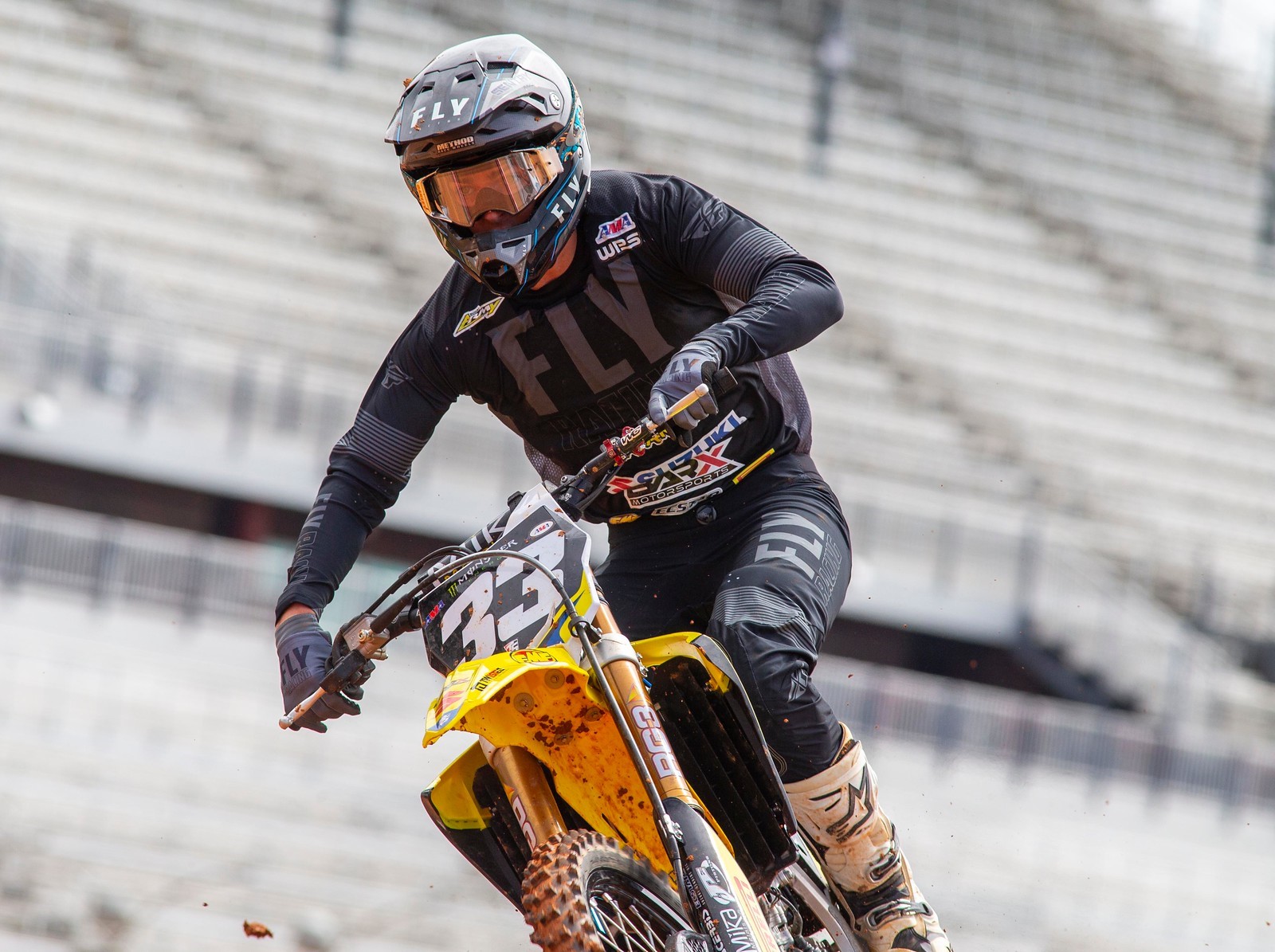 Derek Drake wrapped up the Atlanta triple-header with a thrilling LCQ ride. Going into the first corner Drake was right behind his Suzuki teammate Dilan Schwartz. They were both inside the top four as the pack swept out of the first corners and down the first rhythm lane. Within two minutes Drake made the pass into a podium position and the Suzuki teammates both sat inside the top three. With under a minute on the race clock, Drake mis-timed a tricky rhythm section and the mistake took him off the track. Drake re-entered safely but lost one position and put himself under attack from another rider behind. Drake dropped just outside of a transfer spot despite a good recovery from the incident and showed great speed all night.

"At Atlanta three I struggled with the pace and the fast track," explained Drake after the dust had settled. "I just need to have some more time under my belt."

After fifteen rounds, comprised mostly of triple-header events, the Suzuki teams travel to Salt Lake City to conclude the 2021 Supercross season with a final double-header. The racers are displaying great talent and determination and are excited to re-take the track and put in their best finishes at Rice-Eccles Stadium on April 24th and May 1st.