Brea, CA (February 3, 2021) – The second Indianapolis Supercross, part of a Monster Energy Supercross triple-header, served highs and lows for all the riders with tough, rutted conditions. Twisted Tea/H.E.P. Motorsports/Suzuki athlete Brandon Hartranft shines on his Suzuki RM-Z450, matching his season-best performance with only five races under his belt in the premier class. Teammate Adam Enticknap had a night of hotly-fought battles on his Suzuki RM-Z450, and BarX/Chaparral/ECSTAR Suzuki racer John Short had a promising night that unfortunately ended early after a great ride on his Suzuki RM-Z250 in his heat race. 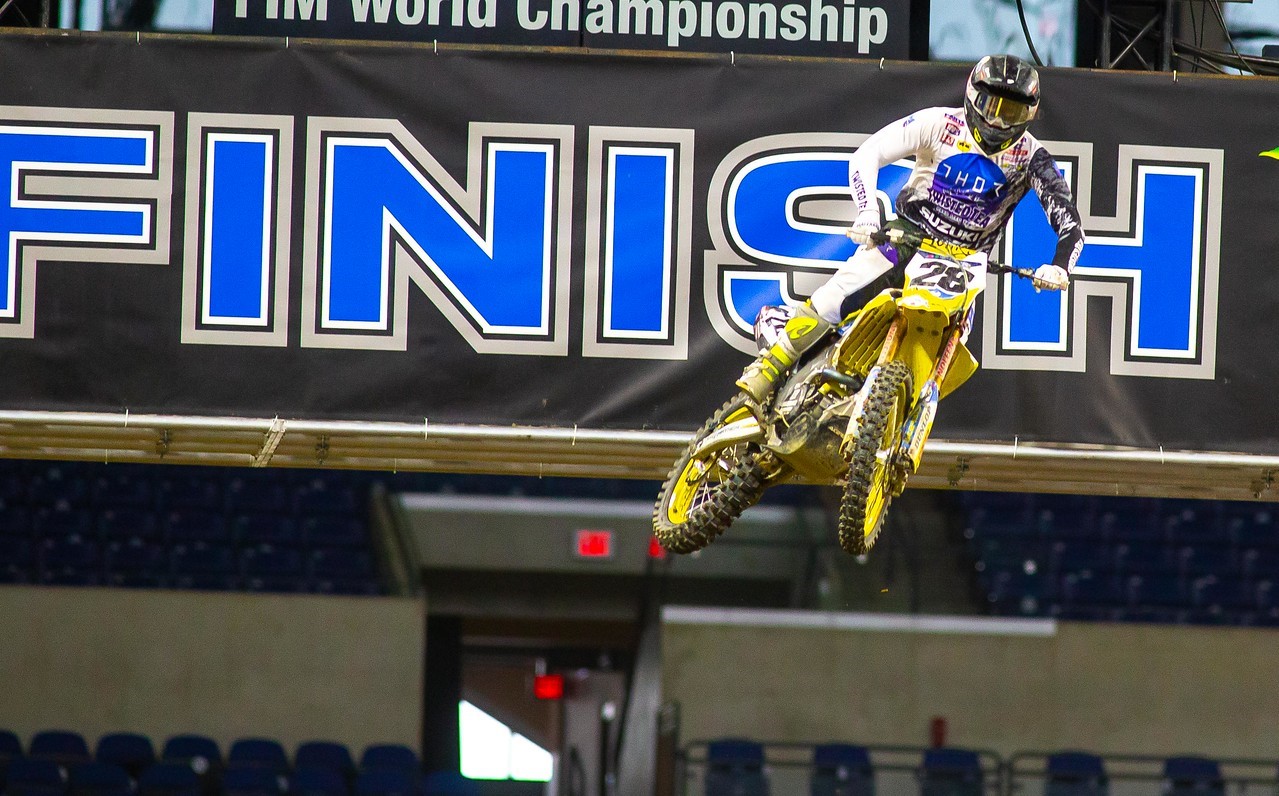 After his best qualifying position thus far in his rookie season, Hartranft was clocking fast laps and looking comfortable. A track-edge tuff block played into several riders’ finishes and it caught Hartranft in his heat, but a steady ride and clean passes in the last chance qualifier put him into the main event. Some first turn chaos removed the advantage Hartranft's great ride down the start straight earned him, but he laid the power into the Indy soil and climbed forward until the finish.

"I felt way better today. I think I’m starting to come around and ride the 450 a lot better. I'm getting used to the pace and I'm liking the RM-Z a lot." Hartranft said of his riding and machine. "In the heat race I got a strong start, made a few mistakes, and then caught a tuff block in a turn with my shifter and fell over. In the main event I actually went into the first turn first – I didn't come out first, but I went in first. I got shuffled back a little bit and I had to roll the finish line because I almost got pushed into the side of the finish line structure. That dropped me back from around the top ten to about 20th. That was a bummer, but I rode a lot better in the main, had consistent laps, and just never gave up. It was a much better day today and I'm already looking forward to Saturday." 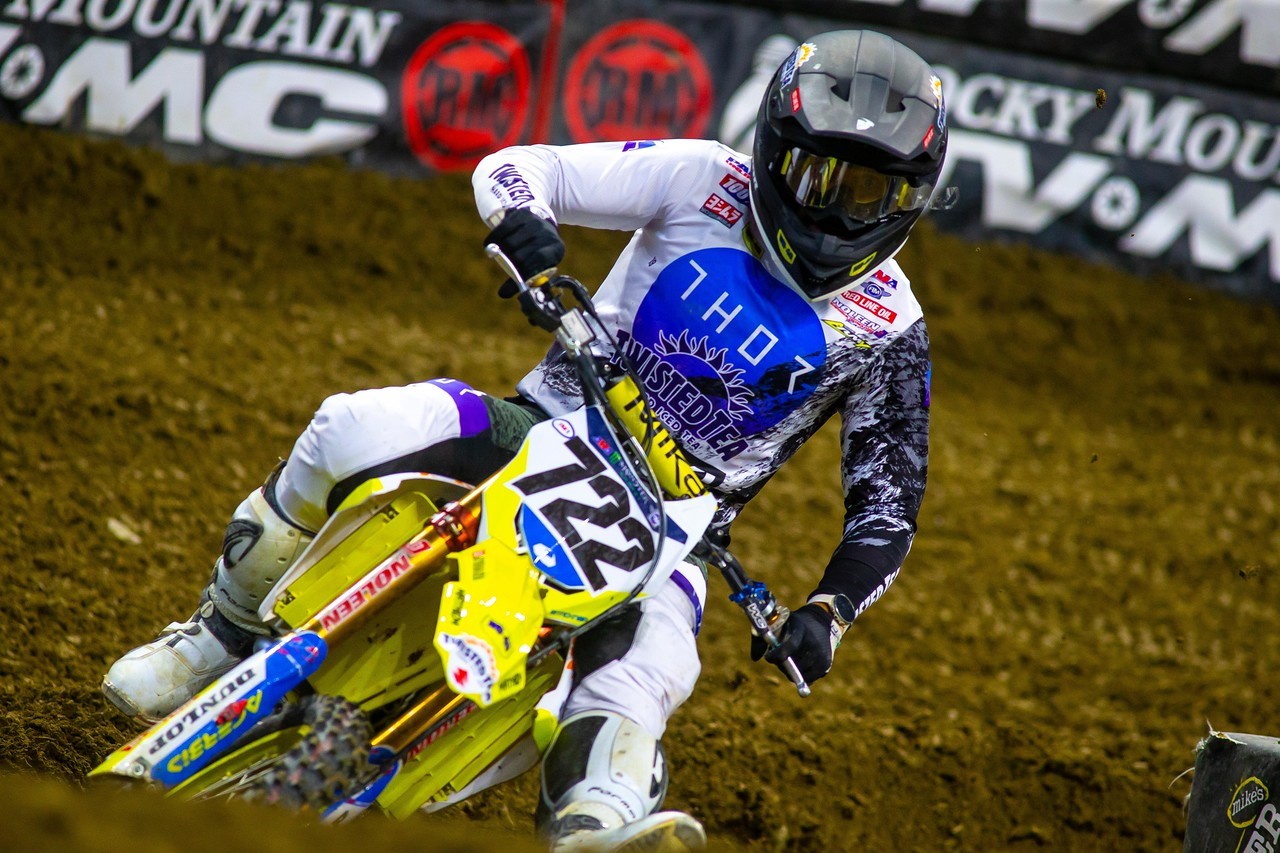 450 class veteran Adam Enticknap spent a night scrapping for track position and giving more than he took, but one bad bump in the last chance qualifier ended his night far short of what his lap times set for his and his team's expectations.

"Coming into the races I was definitely coming off of a high from the last round," Enticknap said. "In the LCQ, I had a good gate position and came around the first corner in around fifth or sixth. I made a couple of moves, but in the end I got in contact with the fifth place rider. We bumped right before the triple face and I landed on the tuff blocks which ended my night. We'll go back, get some more good starts, start the day off right, and go into next week with a holeshot and a stronger finish." 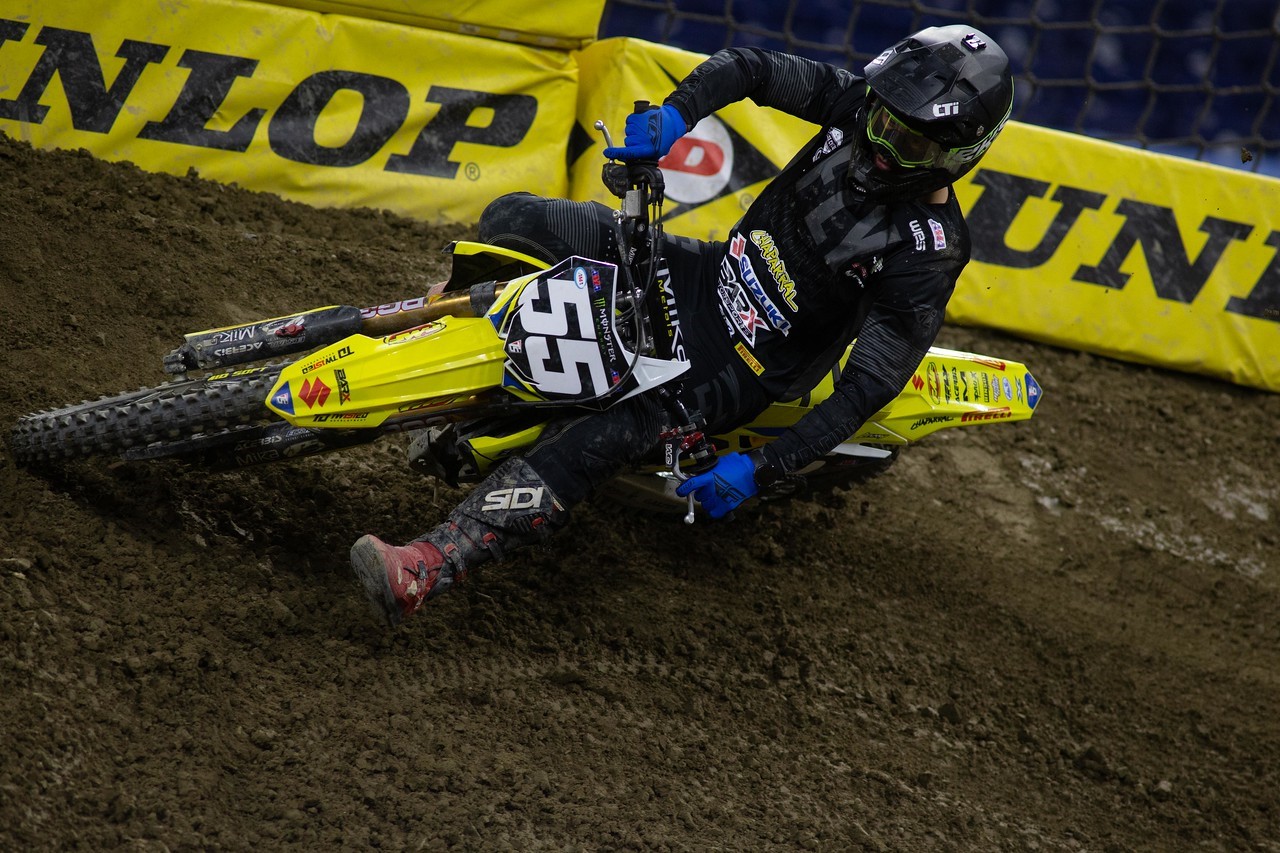 BarX/Chaparral/ECSTAR Suzuki's John Short began his night's charge from a mid-pack start in heat one of the 250 East class. His passes got him quickly into a direct transfer position yet Short pushed on, nabbing three additional riders before the checkers flew. With an eleventh gate pick and strong riding behind him it looked like a good night, but locking bars entering the first corner meant Short wasn't able to deliver on his promise of earlier in his heat.

"Tonight wasn’t the best night." Short said. "I had some issues in practice and felt just off a little. I raced hard in the heat race and was very confident with my speed as I felt great in the closing laps. I was aiming to put my RM-Z up front early in the main, but unfortunately I put myself in a bad position off the start and went down hard, ending my night early."

"We had an okay day," was the summation by Twisted Tea/H.E.P. Motorsports/Suzuki Team Manager Dustin Pipes. "I think Adam needs to put himself in better positions because he's definitely a main event guy. I was very happy with Brandon, I think he rode well. He has a few small things to work on, but I think it was a solid race to build on for round six. I'm pumped to see what the guys do on Saturday."

The series remains in Indianapolis until Saturday when the triple-header wraps up. The teams then motor south to Orlando for the final 250 East round before a long break for that division. The Twisted Tea/H.E.P. Motorsports/Suzuki riders and both coasts' riders of the BarX/Chaparral/ECSTAR Suzuki team are looking ahead to more strong rides and even better finishes.