Anstie finished his 450 class rookie season strong and fast. Previously considered a motocross and sand track specialist, the Englishman masterfully adapted to indoor racing as proven by his season-best finish at the final round on a tight, hard-packed supercross track. Anstie mixed it up in his heat race, inside the top five for much of it, for a direct transfer to the main. A mid-pack start in the main event hurt Anstie's chances of a top ten, but he held his ground, earned a few positions, and capped his first indoor 450 season like a top, seasoned racer.

“It was awesome to end my first 450 SX season with a twelfth in the main at the second Salt Lake City race!" exclaimed Anstie about his finish. "We made progress at each race this year and I’m happy with where we ended up. I’m looking forward to changing things up now and getting back to the outdoor series!”

Dilan Schwartz put in a strong day of racing in the 250 class despite a minor injury incurred early in the day. In his heat race, Schwartz had great track speed, with four positions picked up in a single lap. His main event started with tough luck when a multi-rider crash in the first turn sent him off the track and to a dead stop. Schwartz did all he could at the season finale, but despite his efforts the rookie did not bring home his best ride at the last 2021 supercross.

"Salt Lake City was a big learning day for me," Schwartz reflected. "In the first free practice I cased a jump and messed my ankle up pretty well. I had almost zero mobility in it the whole day. I was struggling to be comfortable, but I toughed it out and got it into the main event. During the main I got into some first turn carnage and had to come from way back. I was feeling really good on the track and putting in solid laps, but unfortunately with just a couple laps to go I ended up crashing. That ended my night, which was a bummer. I'm glad I'm healthy and I am looking forward to getting into outdoor prep for the first round on May 29th!"

In his heat race, 450 class rookie Brandon Hartranft emerged from the first corner mid-pack and tried to fight his way forward. Unfortunately, he missed a direct transfer position by one spot amid the deep 450 class competition. The LCQ presented similar passing opportunity challenges and Hartranft ended the year with valuable 450 supercross experience that will serve him well battling the same competitors this summer in the outdoor motocross series.

"The day started off well in free practice," Hartranft described his early laps on the track. "The second practice didn’t go as well; I crashed on what I thought was going to be my best lap so my final qualifying position wasn’t as good as what I felt I had in me. In the night show I had a decent start in the heat race, but for some reason the track was dark, and it was messing with my vision, so my timing was thrown off. In the LCQ I just didn’t ride well at all. All in all it wasn't a strong night, but I’ll take the positives out of it and move forward." 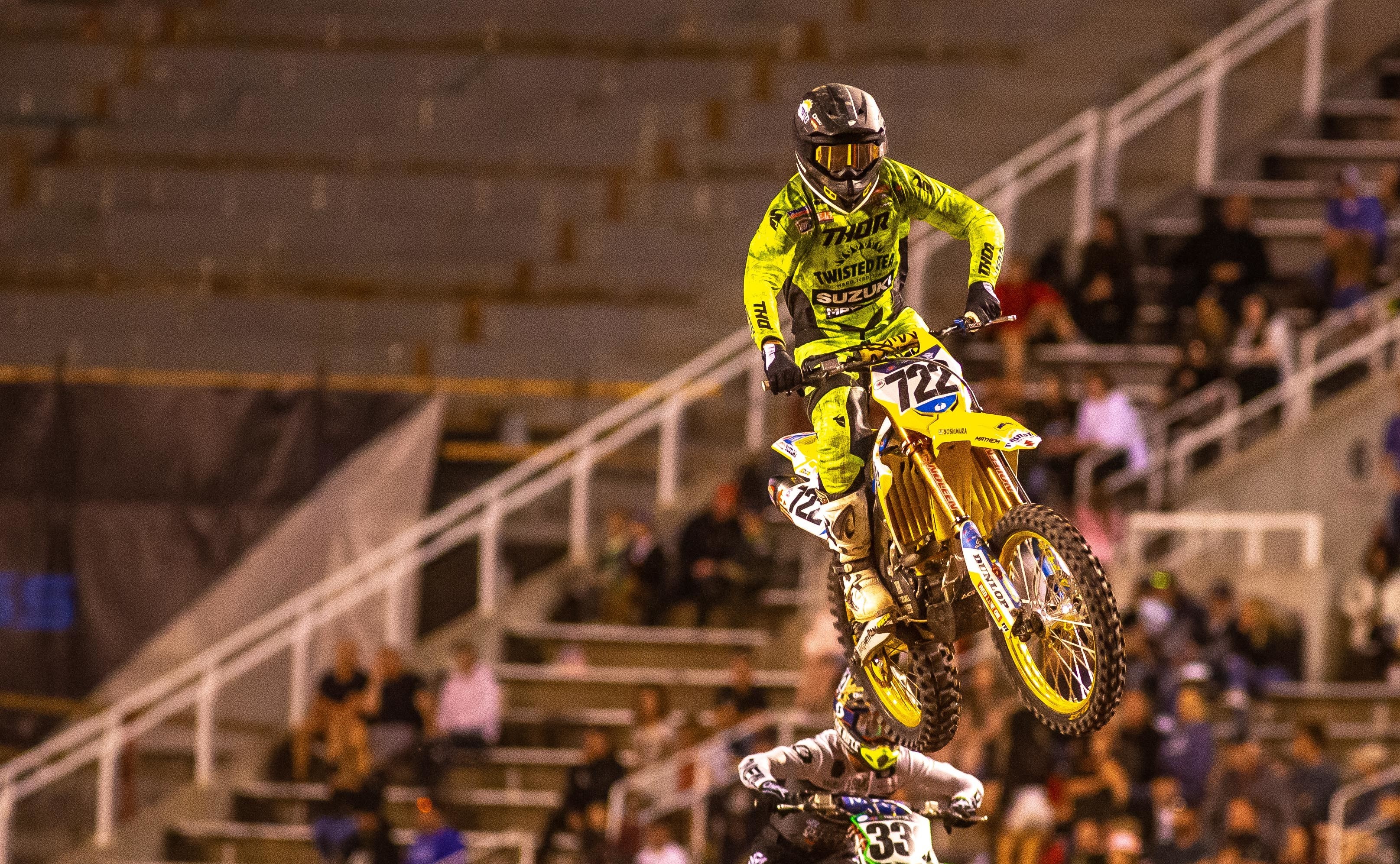 Adam Enticknap had a similar night on the tight, dry track despite putting in strong laps in qualifying. In his heat race Enticknap wasn't able to display his potential and wasn't able to improve positions from his starting spot outside of a transfer position. In the LCQ Enticknap tried again to recover from a tough track position. He missed a transfer despite a late race charge and position improvement. The racer's continued return from an injury wasn't as strong as previous performances, but he wrapped up his season with a strong standing amid the best racers in the world.

"Timed qualifying went well. I rode in the A group this week." Enticknap said. "The track was very wet in the morning, but it got much better through the practice sessions as the track conditions evolved. In my heat race I had a bad start and worked my way through the field the best I could. In the LCQ I had a decent start and made some quick moves, but I came up short. I ended the season healthy and I'm looking forward to putting more work in and continuing to improve."

"It was great to end the supercross season with our best result," Twisted Tea/H.E.P. Motorsports/Suzuki Team Manger Dustin Pipes summarized. "Max was really close to the top ten and he was making great strides throughout the main. Our Crew Chief Clark Jones made the proper bike changes throughout the day to adapt to the conditions and it showed with how stable the bike was in the main event. I really think we have the right formula for big gains in the future supercross seasons. In the meantime, the team will turn its attention to the outdoor national series where we will look to improve on our freshman season results from last year. Max and Brandon are both more natural outdoor racers so we're looking for them to excel."

John Short's day jumped off to a great start, qualifying seventh-fastest of the east coast racers, but a small miscalculation on lap two of his heat didn't allow him to put that speed to its best use. His talent was on display again in the LCQ, but a bad start sealed his night even though he advanced seven positions over the course of the 8-lap race.

"Last night was pretty good in terms of how I rode, but sometimes things just don’t go the way you want," John Short said after the season had wrapped. "I made a small mistake on lap two of the heat race and lost the front end in the mechanics' corner. I got up quickly, tried to adjust my clutch lever, and rode as hard as I could to try and recover into a qualifying position. Instead I ended up going down again in the whoops and mangling the bike. Then in the LCQ I didn’t execute the start and unfortunately, wasn't able to work up to a qualifying spot. I had high expectations for the night, but that’s racing and you live and learn. There were a lot of positives from the weekend and a few areas that I know I need to improve on."

The teams will take the knowledge gained on rider performance and bike set-up and be ready for the 2022 supercross season. The teams now have four short weeks to switch over to their outdoor motocross programs for that series, which kicks off on May 29th at Fox Raceway in Pala, California. The Suzuki teams thank their racers, crews, and sponsors for an exciting season filled with great moments. For more on the teams and riders, please visit SuzukiCycles.com/Racing and HEPMotorsports.com.