Brea, CA (February 8, 2021) – After eight days and three rounds of Monster Energy Supercross inside Lucas Oil Stadium in Indianapolis, Indiana, the Suzuki racers and the 17-round series head south to a two-round stand in Orlando, Florida. Adam Enticknap on his Twisted Tea/H.E.P. Motorsports/Suzuki RM-Z450 finished off the Indy rounds matching his best finish of 2021. Brandon Hartranft and his Suzuki RM-Z450 had the nail biter ride of the night. And after putting in some laps in qualifying, it was determined that John Short would not be able to compete with his BarX/Chaparral/ECSTAR Suzuki RM-Z250 due to an injury incurred at the previous round. 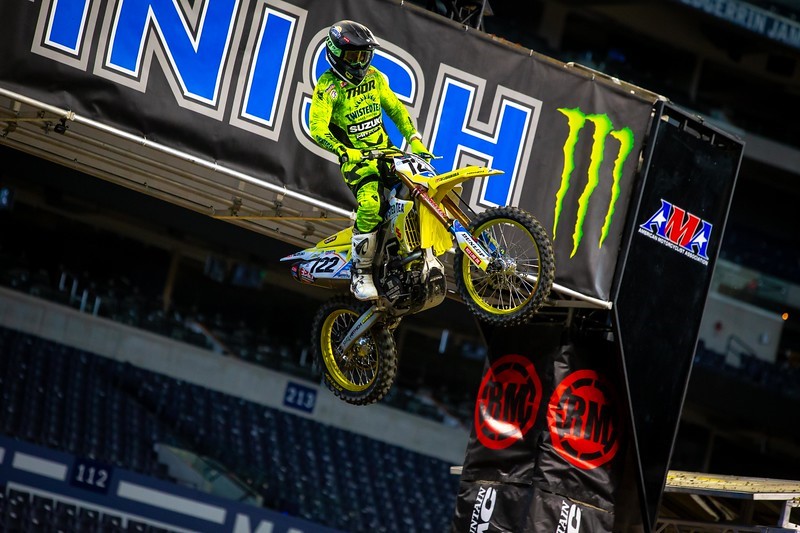 The tight and technical track layout at Indy 3 worked to Adam Enticknap's favor. After a mid-pack start in the last chance qualifier, Enticknap put his skills and his RM-Z's instinctual handling to the test. In the short seven lap race he passed five riders to secure a spot in the main; there, Enticknap earned a tie to his best finish so far in 2021.

"In the heat race I got a decent start. I worked my way through on the first lap, which was really good," Enticknap said. "In the LCQ, I was proud of myself. Last week, I was pretty frustrated because I tangled up with another rider and I told myself if I can just stay up and stay out of that chaos and ride my own lines I can make it into the main no matter what. Coming out of that first corner, I think I was marked in eleventh, and I made my way all the way to fourth place. My race craft was awesome, I made great decisions, and I did what I was supposed to do. In the main event I improved a lot for the first 11 to 12 minutes, but I made some mistakes after that. We talked about it with the team, we got it all squared away, and I'm excited for what's to come in Orlando." 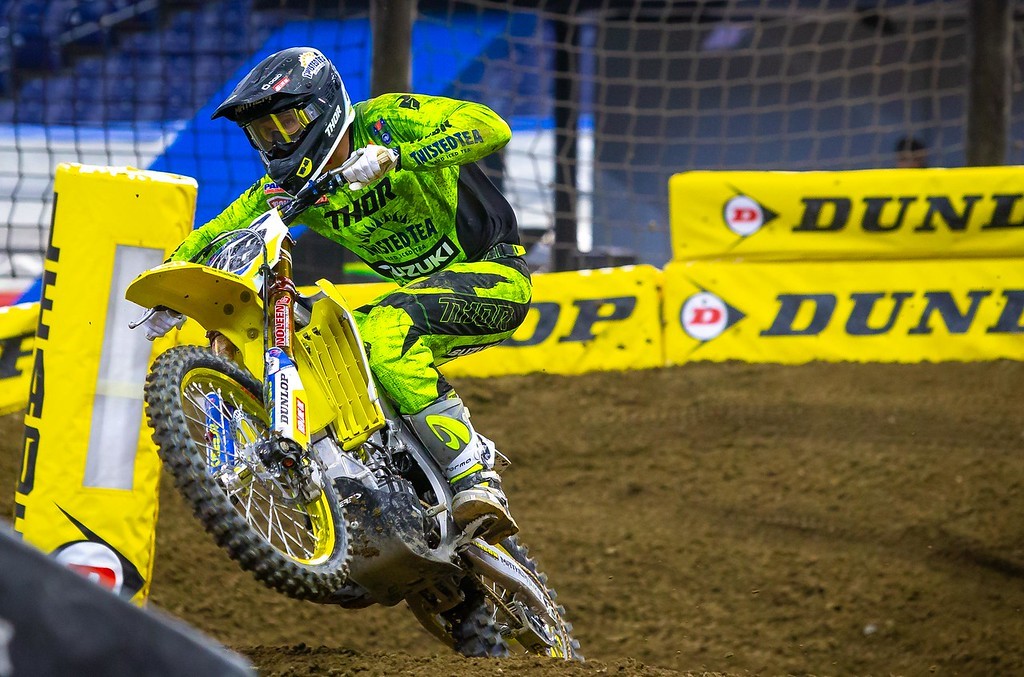 The track's soil was dryer after more than a week inside the domed stadium. The ruts were shallower, but the topsoil afforded less traction. Whereas rookie Brandon Hartranft managed the deep ruts so well, he met less success when the conditions presented a less-technical track surface.

"In my heat race I got a good start; I think I got pushed around and then I fell, so I had to go to the LCQ," Hartranft reported. "I didn't get a good start in the LCQ. I was in the back, but I fought hard and almost got fourth on the last lap. There are some positives to take away, but obviously I'm not too pumped on the night, so I guess we'll have to go get 'em in Orlando." 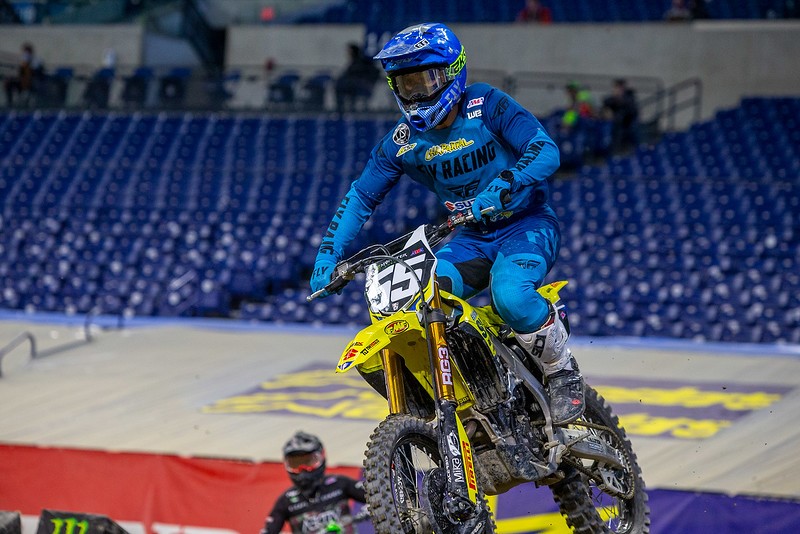 John Short, in a class that's already seen five other top racers miss at least one main event due to injury, made the tough call to determine he had not healed sufficiently from a bad fall funneling into the first corner in the previous round's main event. Short rode qualifying to earn a spot on the line, but understood he would risk further aggravating his injury with a rush back to competition.

"Unfortunately, I won’t be competing tonight." Short said before the night’s fireworks show kicked off the racing, "Tuesday’s main event crash left me a little banged up. I have a separated shoulder. It's not a major injury, I rode practice this morning, but I decided that it would be best to let myself get back to 100% so I can compete at my full potential. It’s unfortunate, but I hope to get back out there at Orlando on my RM-Z250!"

"The race was okay, there were some things to build on," was Twisted Tea/H.E.P. Motorsports/Suzuki Team Manager Dustin Pipes' overview, "I'm very happy with the way that Adam rode. His first twelve minutes or so he was catching riders that he normally doesn't beat, so that was a big plus. His speed is improving and I think that will come through in the rounds to come. Brandon, we need to go back to the drawing board and see what we can come up with. We're going to change some settings in the forks and shock and hopefully get him racing to his full potential next weekend in Orlando."

The two upcoming Florida rounds will be the first contested in an open stadium this season, and the second of the Florida rounds will kick off the 250 East series and the three BarX/Chaparral/ECSTAR Suzuki racers going after that championship. The third Florida race will be the legendary Daytona Supercross. Orlando 1 drops the gate on Saturday, February 13th.