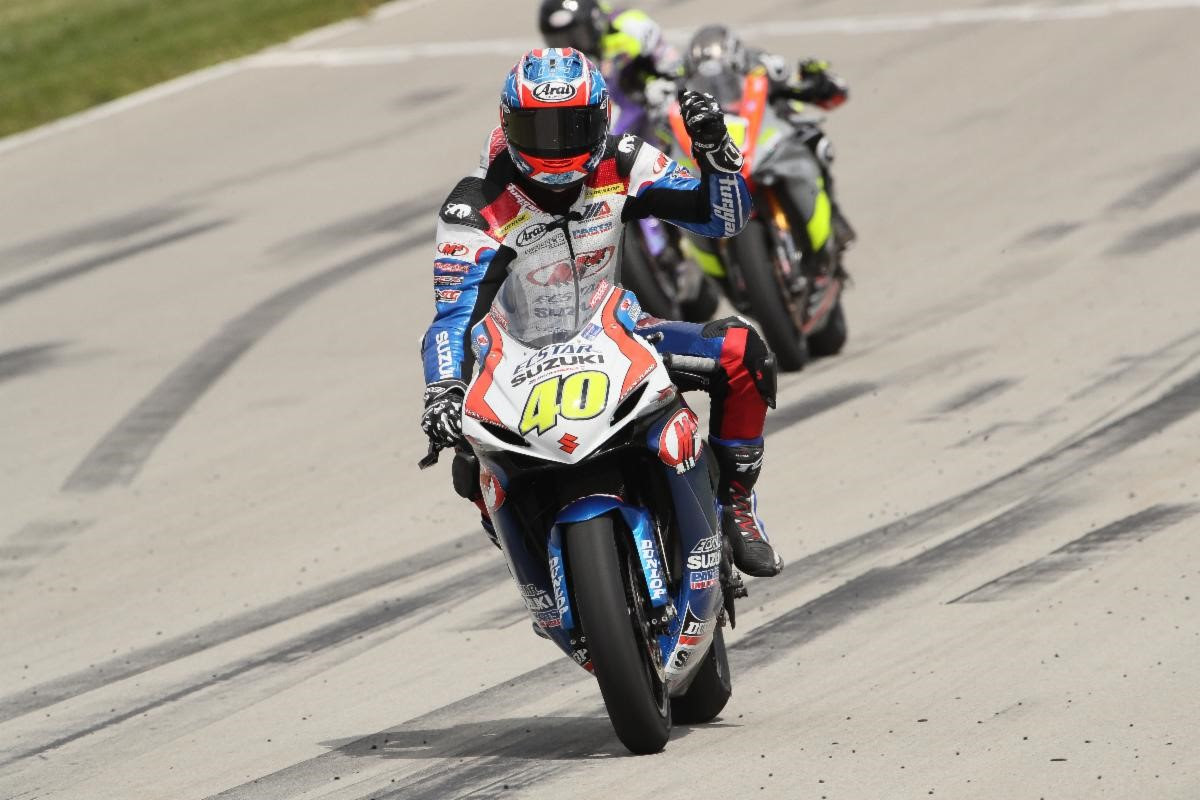 M4 ECSTAR Suzuki rookie Sean Dylan Kelly kicked-off Saturday’s MotoAmerica Supersport race one with his eyes focused on the finish line. Sprinting into second right off the grid on his GSX-R600, Kelly ran in tight formation over the opening four laps with Supersport points leader and teammate Bobby Fong until a crash brought out the red flag. On the restart Kelly picked up where Fong left off and fought hard to keep a four-rider pack behind him so he could hold his lead. Kelly prevailed, cementing his first-ever MotoAmerica Supersport win.

Kelly’s adrenaline continued into Sunday’s Supersport race two as he went head-to-head with Fong as the two teammates executed a series of breathtaking passes on one another. Kelly gained control of the race on the final lap, securing a back-to-back victory weekend. Despite Saturday's highside, Fong not only competed in race two, he finished in second place. Fong’s persistence and Kelly’s achievement’s allowed Fong to remain the Supersport championship leader.

Roadracing World Young Guns Suzuki's Alex Dumas took control of the Twins Cup race one on his SV650, pushing forward through the pack while building a lead of more than five seconds that he would hold to victory at the checkered flag. For race two, Dumas proved again to be unstoppable, claiming his fourth win in five races by a wide margin. The Canadian again pushed hard early to establish his lead and then used his superior pace to break free of the pack. The win was Team Hammer's 80th in AMA and MotoAmerica competition, and its 227th podium finish in the national series. Dumas now leads the Twins Cup championship by nine points.

Starting on the front row aboard his Superbike-spec GSX-R1000R, Lewis moved into third in the race's first corner but was hit by another rider and the resulting crash spoiled Lewis' best opportunity of the year.

On Sunday, Lewis kicked-off race two in second place and moved his GSX-R into lead on the second lap. He held the lead for several laps before ultimately settling into fourth, less than a second behind third and just over four seconds behind the winner. As the first non-factory superbike, Lewis’ result was the best of his six top-five premier-class finishes in 2019.

Team Hammer will next head to New Jersey Motorsports Park on September 7-8 for the penultimate round of the 2019 MotoAmerica season.